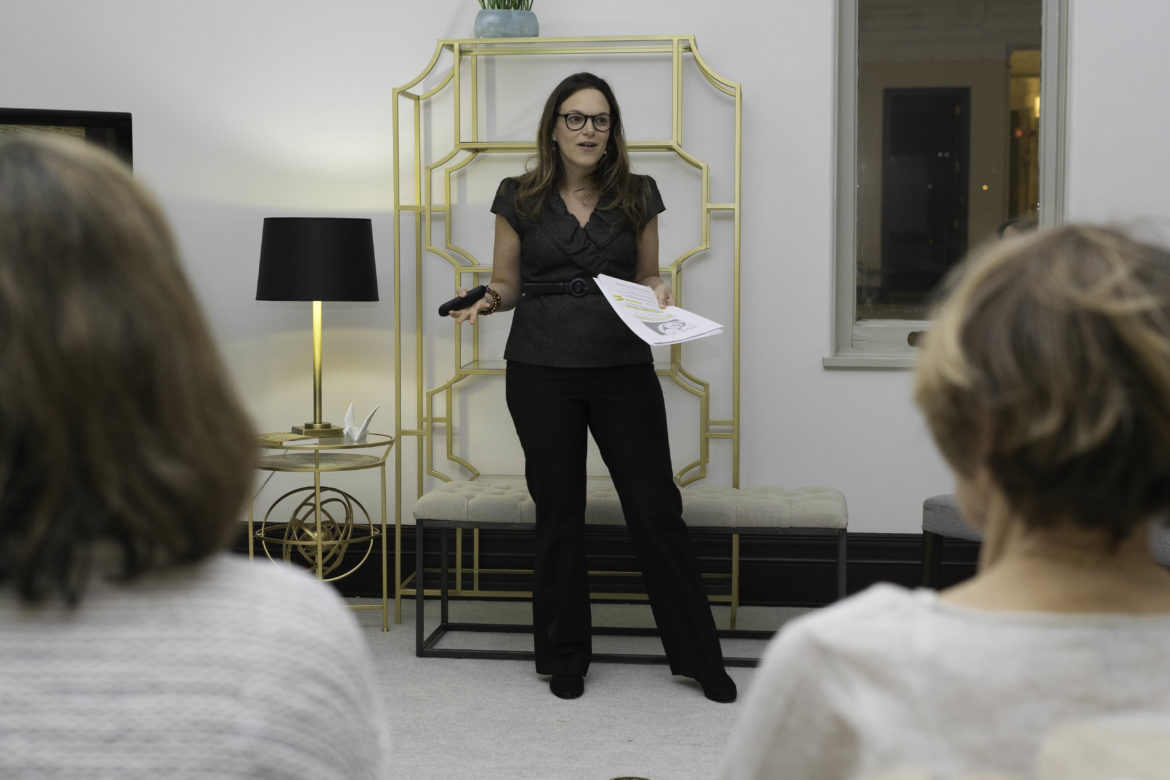 Ali Shapiro teaches a class on Feb. 9, 2017, as part of her small business on nutrition, health and weight loss. She gets her health insurance through the Affordable Care Act, referred to as Obamacare. (Photo by Aaron Warnick/PublicSource)

Ali Shapiro is a small business owner who has battled with the healthcare system her entire life.

At 13, she was diagnosed with Hodgkin’s Lymphoma. The cancer started in white blood cells called lymphocytes, which are part of the body’s immune system. After going through six months of chemotherapy and one month of radiation treatment, she was cured from the cancer.

But she never fully healed.

The effects of the treatment led to depression, irritable bowel syndrome and acne. Oftentimes, she turned to food when the symptoms became too much, prompting her 18-year battle with her weight. She knew she had to make lifestyle changes if she were to fully recover from these negative symptoms.

Shapiro, a 38-year old resident of Squirrel Hill, is now a health coach. As a self-employed businesswoman, she signed up in 2015 for health insurance provided through the Affordable Care Act, commonly known as Obamacare.

“It was a lifesaver. My premiums were less than they were 10 years ago and I have better coverage,” Shapiro said.

The ACA allowed her to grow her business since she no longer had to pay high copays and premiums. She hires contractors to work for her business and doesn’t have to worry about providing them with health insurance.

“I’m really terrified. How can I prepare for that? Will I lose my [business]? Will my husband have to switch jobs? It just adds another layer of uncertainty ..."

When running a business and taking risks, insurance rate increases play a significant role in her future planning for the business. Without affordable health insurance, she cannot invest as much money into her business. If the repeal takes this away, she fears that she’ll have to sacrifice her job or her husband’s job as an independent contractor to obtain health insurance.

“I’m really terrified. How can I prepare for that? Will I lose my [business]? Will my husband have to switch jobs? It just adds another layer of uncertainty we have to deal with. We have no plans,” she said.

The challenges of running a business are an uphill battle if you don’t have that security.

“Choice doesn’t mean you can afford it,” Shapiro said. “The economy is changing and people who are in between jobs, unemployed, freelancers, small business owners, and contractors are all left out of the system.”

Shapiro and her husband are currently insured, but if they had no coverage and there was a medical emergency, "we would go bankrupt,” she said.

After working in the corporate world for years, Shapiro decided to leave her job to start her own business in 2007. By becoming a health coach for others, she created a business that teaches people new ways of approaching food, health and weight loss.

The services she provides to others were important to improving the quality of her own life. “With the power of nutrition and lifestyle changes, I was able to emotionally heal from the aftermath of my disease,” she said.

With the move to entrepreneurship, though, she lost her insurance through her employer. She had to look around for other options. She decided to switch to a Chamber of Commerce Health Maintenance Organization because she needed insurance for health screenings and MRIs as part of her follow-up care.

Brokers advised to her to leave off her cancer diagnosis in her medical history so she could obtain coverage. Despite not going to the doctor often and rarely getting sick, Shapiro noticed her premiums kept going up. When she turned 32, her premiums nearly doubled because they had told her it’s the age where she might have children.

The costs were so high she decided to switch insurance companies. Luckily, her husband was offered a fellowship in 2011 at the University of Iowa for two years. Being part of his insurance plan, she was able to receive good coverage and various benefits from his fellowship.

But once that ended after four years, she was left once again without insurance.

At the time, the ACA had been in effect for a few years. She signed up for insurance through the exchange and received subsidies because she was just coming out of graduate school with a Master of Science degree in organizational dynamics from the University of Pennsylvania. The subsidies covered about half of the costs.

“Our deductible did go up, but it still wouldn’t bankrupt me. We can’t afford to not have health insurance."

Her journey of recovery inspired her to help others who are struggling with similar problems, so she decided to get her certification to become a health coach at the Institute for Integrative Nutrition.

Shapiro believes a lot has to change before health care is affordable to everyone, hoping that the country will move toward a single-payer system similar to Canada. A single-payer system is a national healthcare system where the state, rather than private insurers, pays for all healthcare costs, providing everyone with guaranteed health coverage.

Regardless, the benefits of the ACA outweigh the drawbacks for Shapiro.

“Our deductible did go up, but it still wouldn’t bankrupt me. We can’t afford to not have health insurance," she said.

Now that she’s coaching others on how to overcome the same struggles she faced, she finds meaning in her work. For her, health care is more than just going to the doctor when you’re sick; it’s a safeguard for everyone’s physical and mental wellbeing.

“In health care, being cured and being healed are different. I found meaning in helping my clients. That kind of emotional fulfillment helped me heal,” she said.

Correction (3/2/2017): This story previously misstated the name of Ali Shapiro's business. Some information on how Shapiro obtained insurance has also been clarified.