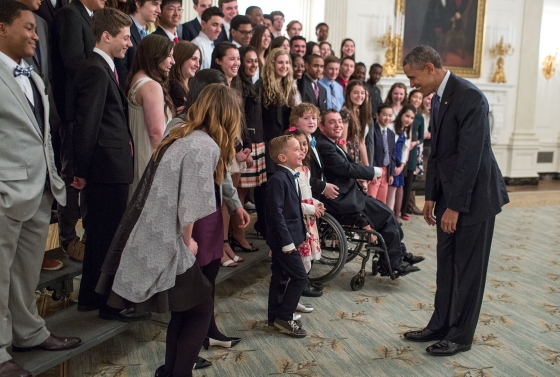 “Are you paying attention?”

“Look closely…it’s changing,” said six-year-old Noah Gue, a cute blonde-haired, blue-eyed first grader from Montana, in a film he made about climate change.

The three-minute film he produced with his parents was one of 15 finalists for this year’s White House Student Film Festival. Noah and his parents attended and met the president.

Noah stares with his baby blues into the camera in his film “Through My Eyes” where he conveys how he’s seen climate change affect his mountain town, Bozeman.

“It’s time for the world to see conservation through a kid’s eyes,” he says in the film.

From a National Geographic article about Noah’s video:

The child’s appeal comes as President Barack Obama sidesteps GOP opponents in his efforts to fight global warming. On [March 19] Obama signed an executive order that requires the federal government to slash its greenhouse gas emissions by 40 percent, from 2008 levels, and boost its share of electricity from renewable sources to 30 percent by 2025.

“Glaciers are receding and soon could be gone forever,” he says in the film, a glacier looming in the background. “Some animals may go extinct in the next century,” he says.

The film shows Noah trying to ski down a snowy hill and then hitting a dry path.

Noah and his family are traveling around Montana taking photos to inspire conservation, he say.

“My hope is that the pictures that we’re taking will inspire others to protect the environment,” Noah says at the end of his film.