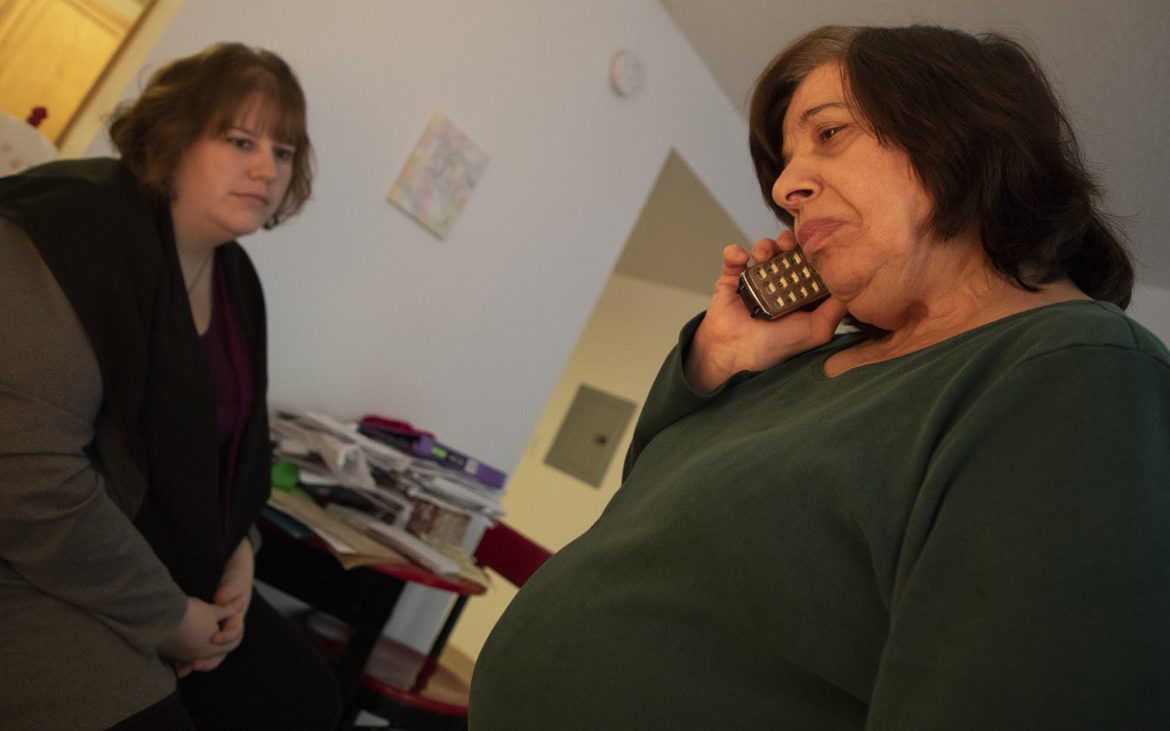 Janet Simeone calls ACCESS, a door-to-door paratransit service in Allegheny County, to confirm an upcoming ride. Whether or not the paratransit shows up on time is a point of anxiety for Simeone.

Janet Simeone never expected to live on her own. Yet at age 71, she’s four years into living alone in a Greenfield apartment.

Simeone has been diagnosed with an intellectual disability.

Combined with depression and anxiety, she has difficulty doing things on her own, including making friends and living independently.

Simeone lived with her aunt, Laurie Raffaele, for almost 10 years. And it was her aunt who ultimately pushed her to try living alone. She thought it would help Simeone feel control over her life and provide an opportunity for her to make friends.

One day, her aunt told her about an apartment she’d found in Greenfield.

Simeone protested. She recalls her aunt responding with a cautionary concern about her future: “What if I get sick and all that, who’s gonna take care of you? You gotta be on your own.” 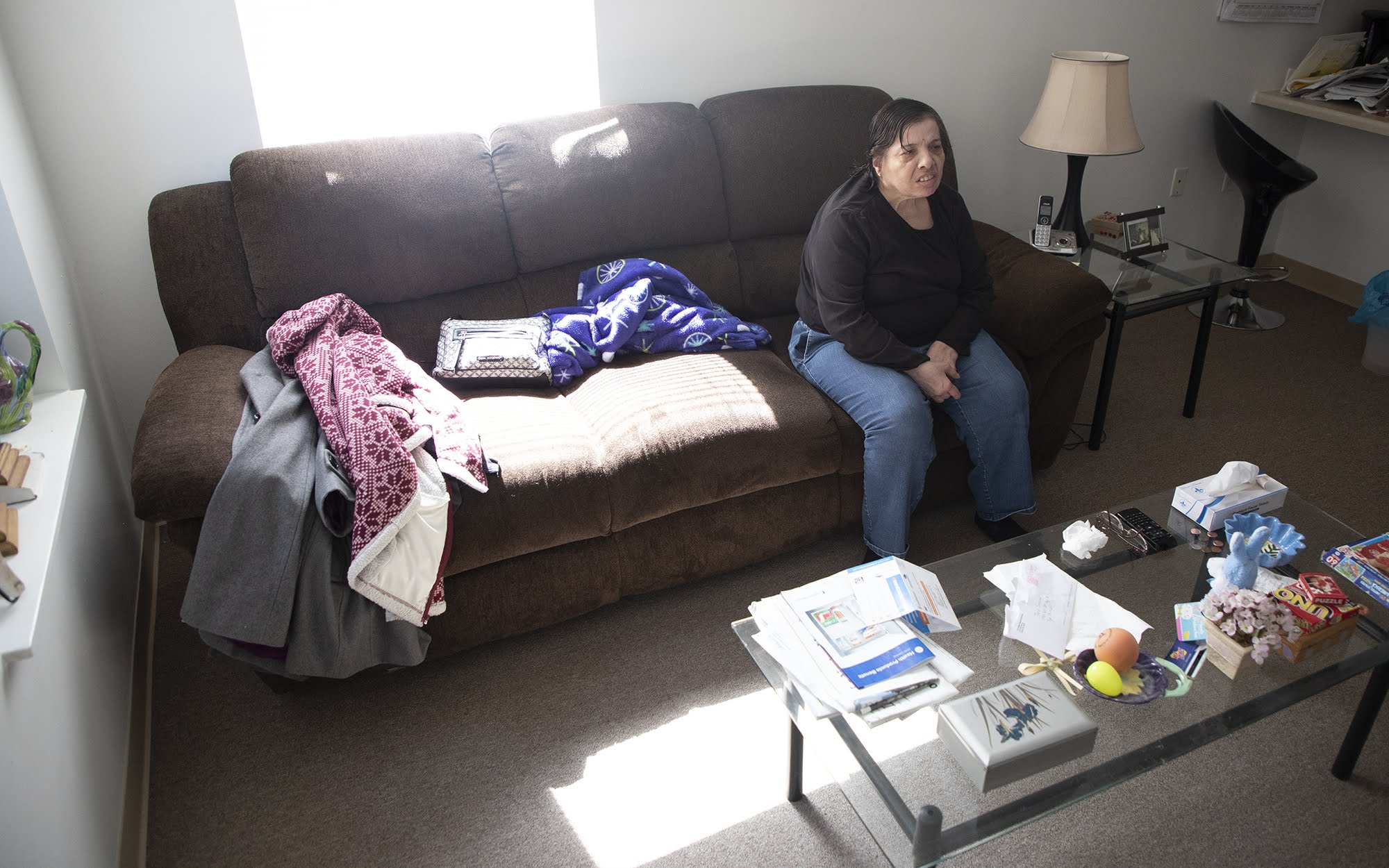 Janet Simeone is 71 and living alone for the first time. 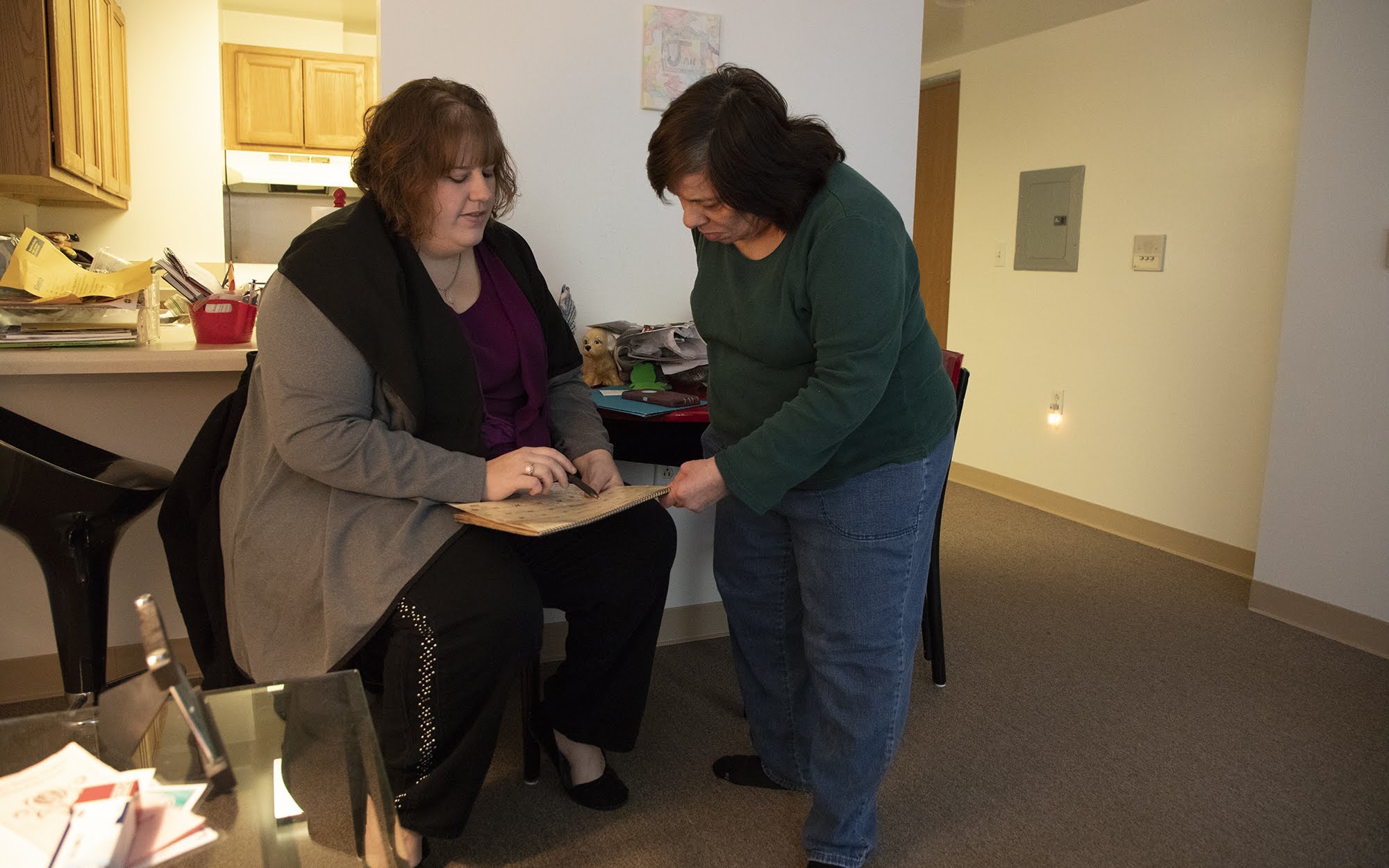 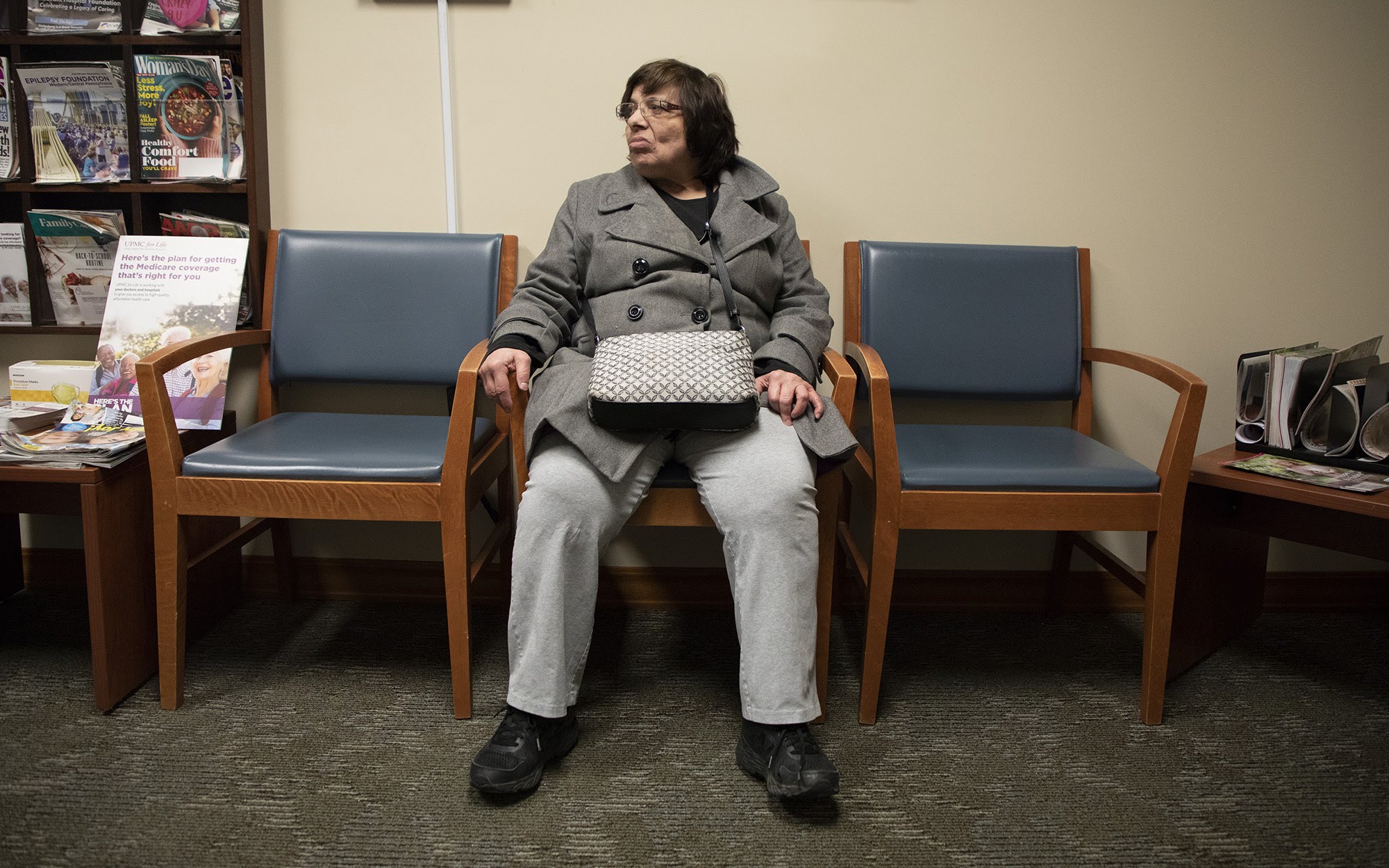 Janet Simeone waits for an appointment.

Her aunt did get sick. She died in October from pancreatic cancer.

Simeone’s rent at the senior-only, low-income complex is paid through her disability benefit. She decorates the apartment for the holidays and is learning more about cooking her own food.

She’s proud that she lives on her own, though she describes her one-bed, one-bath apartment as “puny.”

To pass the time and to distract from symptoms of depression, she’ll turn to television — often crime shows like “Law and Order” and “NCIS.”

“If I’m at home, I relax and watch TV and try to forget it again,” Simeone said.

Since her aunt died, one of the most prominent people in Simeone’s life is Ashley Stearman, a behavior therapist she’s been working with since June 2018. 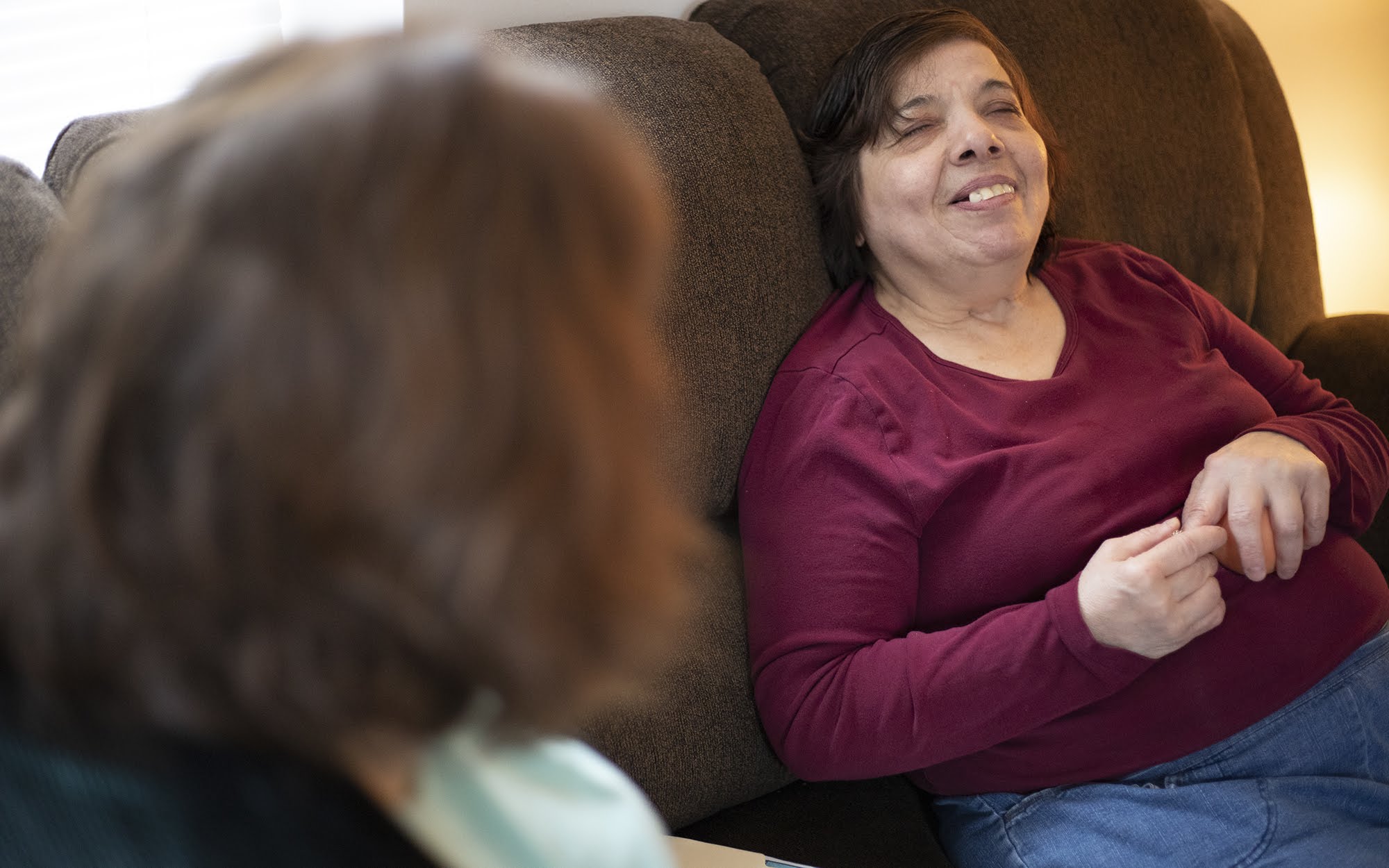 Janet Simeone pictured working with her behavioral therapist to learn different ways to manage her anxiety in her apartment on Friday, Jan. 11. She was asked to imagine herself somewhere that would bring her content. Janet pictured herself in Italy — a place she's always wanted to visit but never had the opportunity.

At the time, Simeone’s anxiety was growing, with numerous triggers: thunderstorms, her aging and aching teeth, and therapy sessions.

Stearman visits Simeone three times a month for a little more than two hours. They do check-ins about her upcoming week and explore any anxiety she is experiencing and how to cope with it. Stearman uses talk therapy to explore the anxiety and behavior techniques like mindfulness to help reduce the anxiety. As her behavior therapist, Stearman said she aims to help Simeone strengthen her ability to cope with emotions because it would improve her overall health.

In Simeone’s living room, the two sit together and organize her calendars for the upcoming week. Simeone isn’t able to drive and, in addition to one-on-one therapy sessions, Stearman drives Simeone to doctor appointments and to go grocery shopping.

Growing up, Simeone felt lonely and isolated. She comes from a large Italian family. But unlike some family members, the only fluency she has in the language are the swear words. 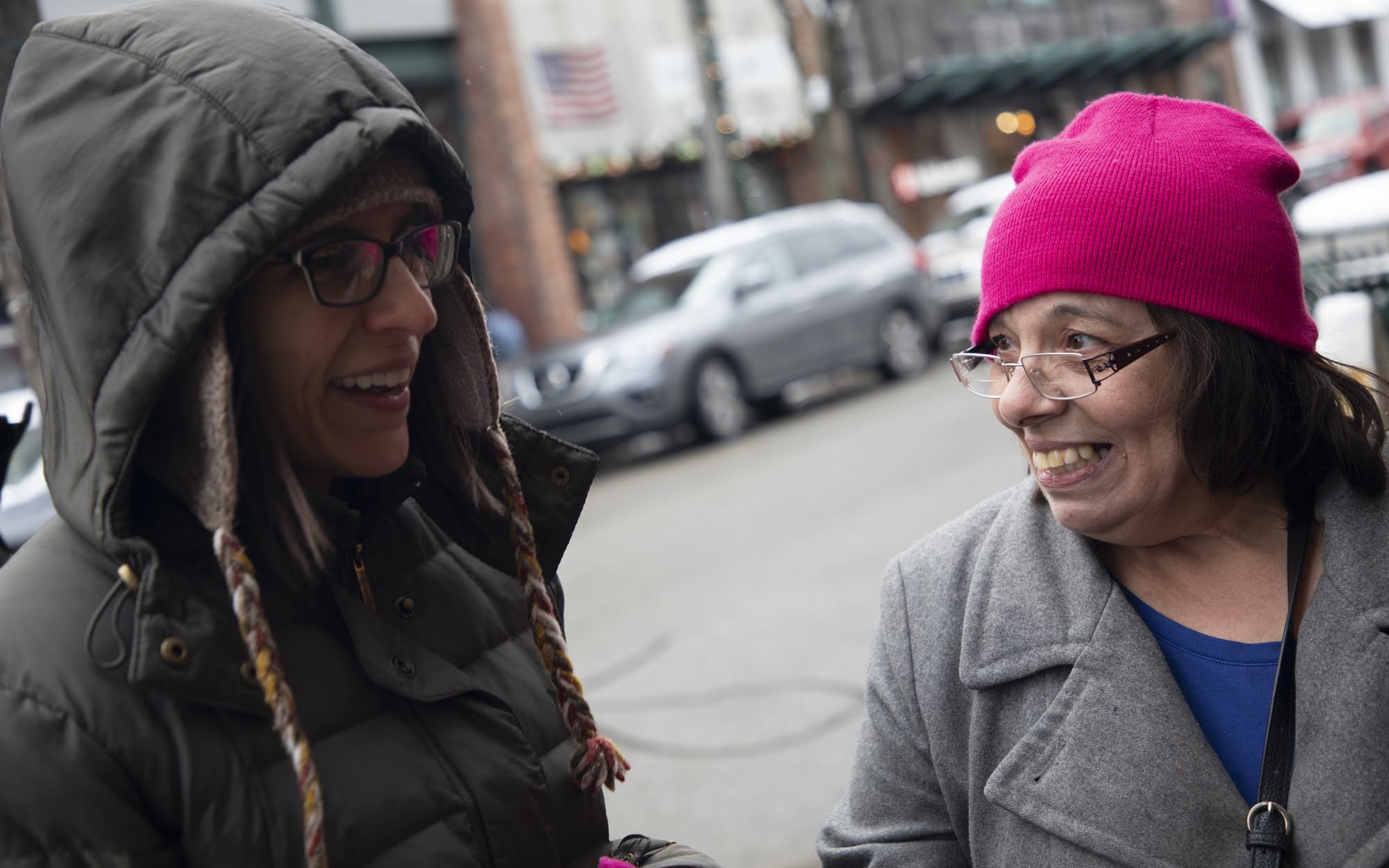 Janet Simeone laughs with her Milestone Centers photography instructor in Shadyside. Simeone said she never had any friends growing up and was often bullied by her classmates. For the first time in her adult life, she said she has good relationships. 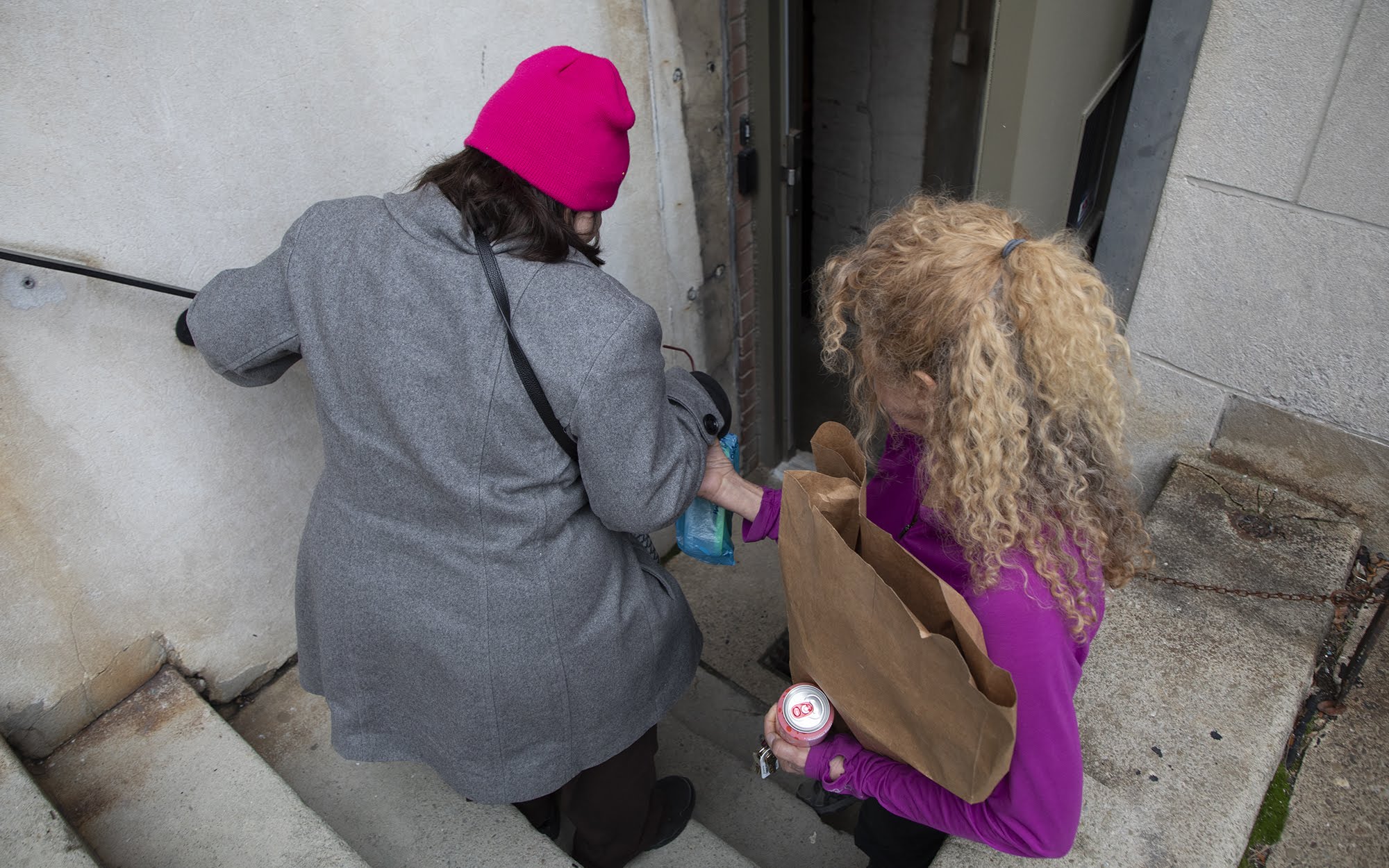 Christine Fortino, an integrative care therapist (right), helps Janet Simeone down the stairs to the ceramics studio at Milestone Centers in Wilkinsburg. According to its website, Milestone is a private, nonprofit, community-based human services agency. 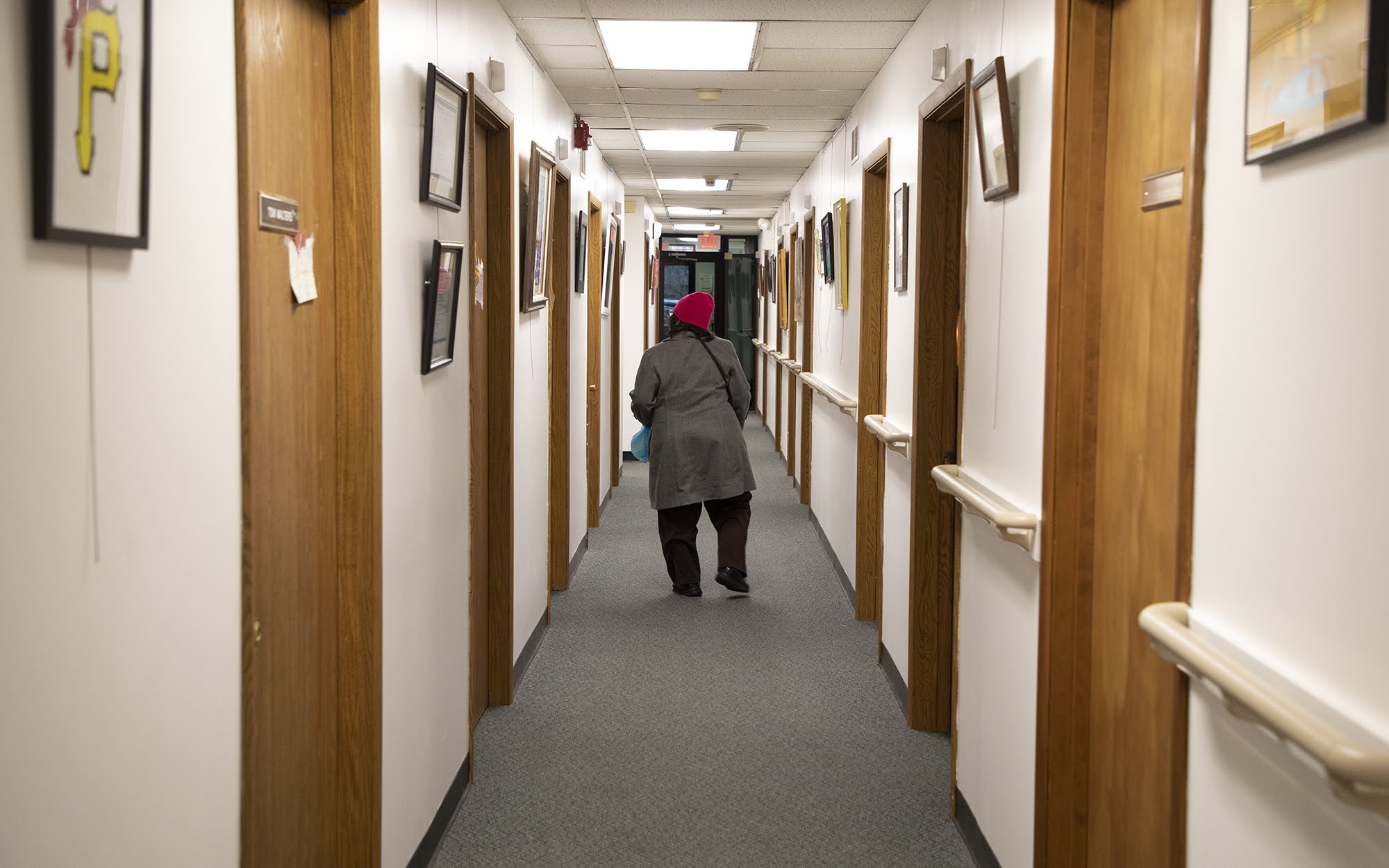 Simeone walks through Milestone Centers looking for the artwork she's created over the course of her time there. Jennifer Macioce, director of day treatment and deaf services at Milestone Centers, said Simeone cried her first day there because she was nervous.

She’d spend time with her grandmother, who she remembers as a great cook, but she died when Simeone was a teenager. She’s still close with her biological father but he and her mother divorced early in her life, and she had a strained relationship with her stepfather. Because her mother slept during the day after shifts at a nightclub, Simeone would take the youngest of her three brothers to the park, help him with his homework and made sure he was fed.

A native of Highland Park, Simeone felt ridiculed by her peers who she said called her “ugly.”

“I always wanted to have friends, but no one wanted to be friends with me,” Simeone said.

When she was a child, Simeone didn’t know the words depression or anxiety. Her stomach would tie into knots when approaching another person, making a phone call or waiting for the bus. This was just her normal. 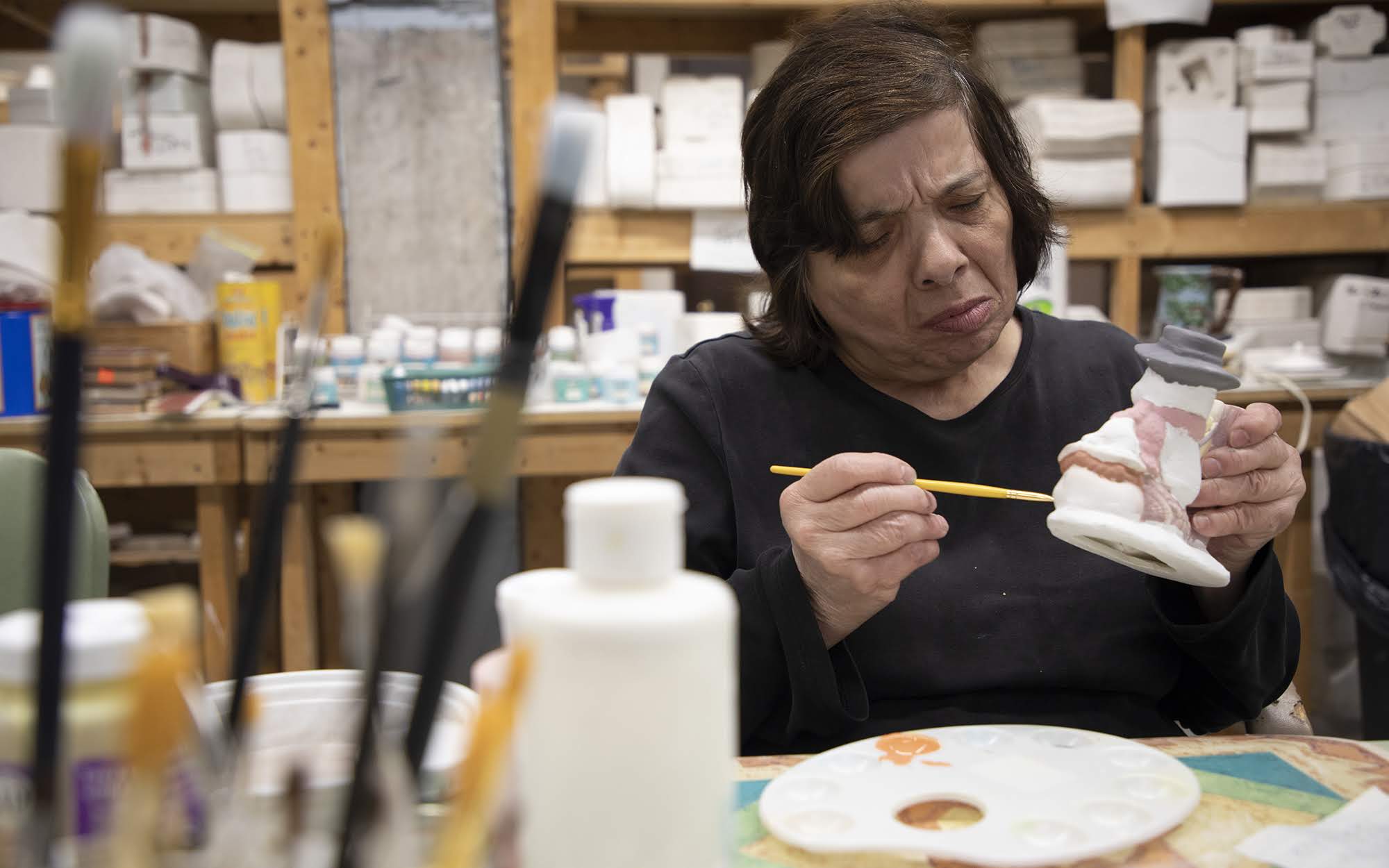 Janet Simeone paints a snowman in her ceramics class at Milestone Centers.

Janet said she never had any friends growing up and was often bullied by her classmates.

After her mother’s death in 2004, Simeone moved in with her aunt who was a few years older. It was her aunt who noticed some behavioral issues. Shortly after, Simeone was diagnosed with anxiety and depression.

Of Simeone’s three brothers, one is still living. Her youngest brother died after an accident with a gun at age 21. Another brother died of a heart attack at age 58.

She visits her only living brother often. He helps her with groceries and picking up prescriptions.

Even years in, she’s still struggling with her living situation. “It’s been lonely at the apartment,” Simeone said.

Her primary care physician started to notice scratches appearing on her body, mostly on her upper thighs, more than a year ago. Stearman said she had started to pick at her own skin out of boredom. 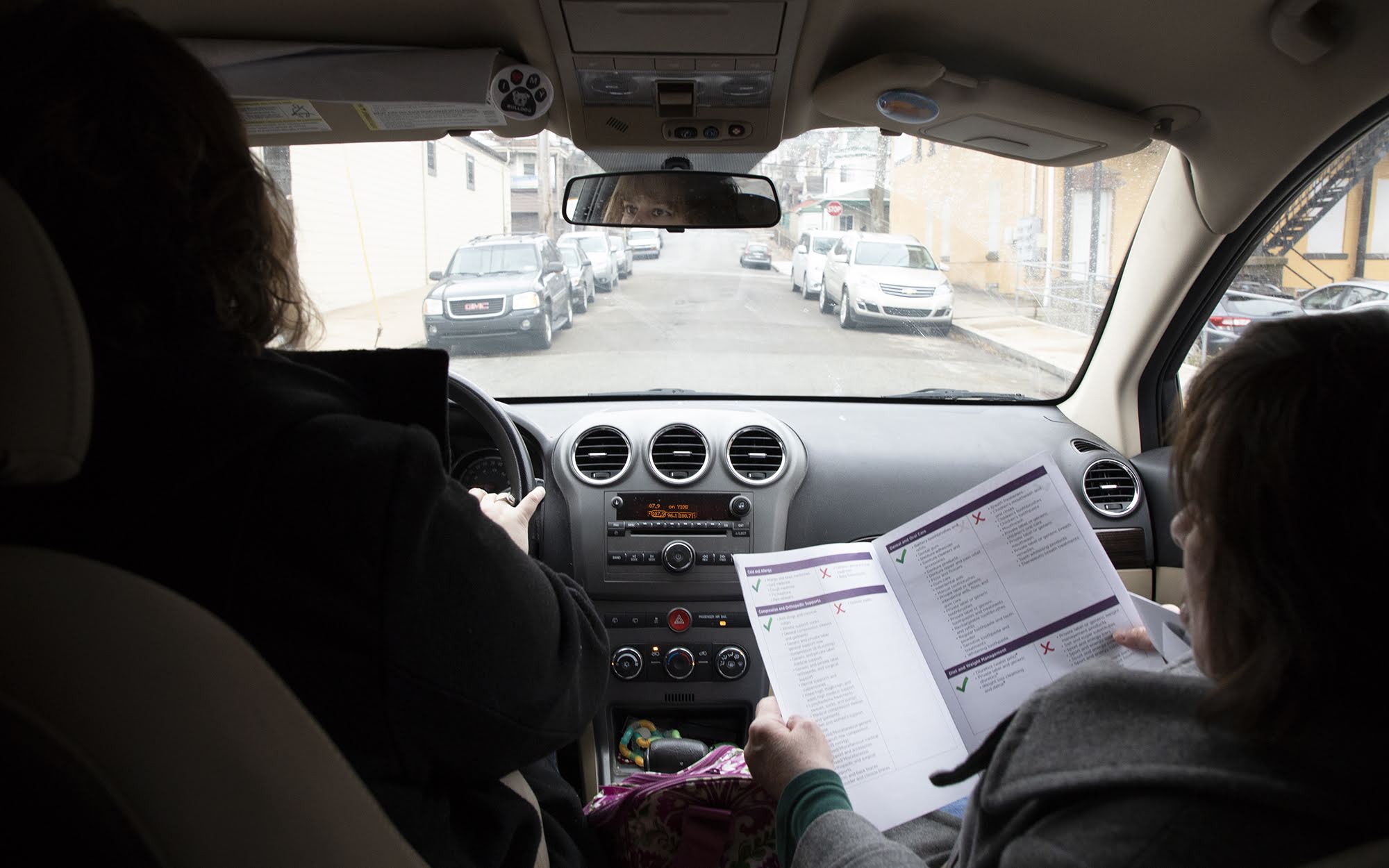 Janet Simeone, without a license, needs to be driven to all her appointments and to the grocery store.

Stearman and her colleagues have also noticed she’s starting to forget things, like appointments. Simeone attributes it to old age, but she’s seen a neurologist and a team of doctors to investigate further.

Her recent forgetfulness has led to more issues with her anxiety. In fear she’s going to miss an appointment, she’ll sometimes repeatedly call Stearman or her colleagues.

When she’s not home or spending time with Stearman, Simeone is participating in activities and fellowship through Milestone Centers in Wilkinsburg. The organization provides services to people with developmental and behavioral health needs.

For the first time in her adult life, Janet said she has good relationships with the people around her.

It was hard for her to do things on her own, including meeting new people. Her aunt was the one who initially introduced her to Milestone Centers. Most of the folks at Milestone have disabilities of some kind, be it physical, intellectual or mental health issues.

Now Simeone goes to different art classes and takes part in gardening and walking clubs. She feels she has forged true friendships.

Kat Procyk is a former PublicSource visuals fellow. She can be reached at psukat18@gmail.com.