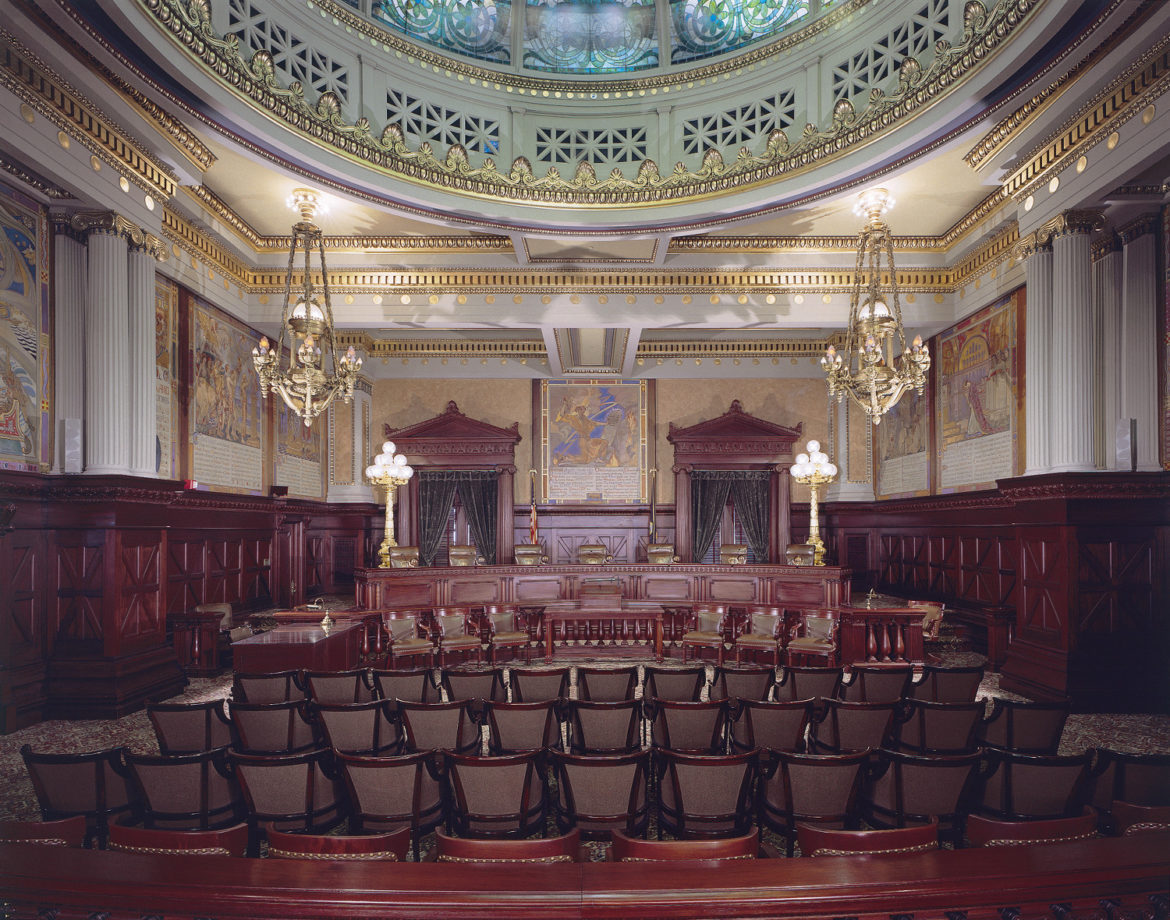 Judicial campaigns are fraught with potential conflicts of interest that include taking campaign contributions from people who could appear in the judge’s court, seeking endorsements or airing television ads.

One of the three vacancies on the Pennsylvania Supreme Court that will be filled in next month’s election was created by the pressures of campaigning.

Joan Orie Melvin used her Superior Court staff to work on her campaigns for Supreme Court and was found guilty on six of seven counts, including theft of services and criminal conspiracy. She resigned in 2013.

Then there was the 2007 case of Philadelphia traffic court judge candidate Willie Singletary — featured on Last Week Tonight with John Oliver (starts at 9:30) — who at a motorcycle rally in Philadelphia, said, “So if you all could give $20, ‘cause you all gonna need me in traffic court. Am I right about that?”

Singletary was convicted in 2014 of lying to authorities about ticket-fixing.

And there are more serious consequences of coming before an elected judge. According to Reuters, elected judges to state Supreme Courts reversed fewer death penalty verdicts than appointed justices.

We want legislators to be responsive to the public, said Michael Dimino, professor at Widener’s Commonwealth Law School. But we specifically don’t want judges to be accountable to popular opinion.

“A large portion of what judges do is to protect people and unpopular causes and protect them from the majority,” he said.

Even though most people may not want to see Nazis marching through the streets or Westboro Baptist Church members protesting outside funerals, those rights are protected by the courts.

That can make the job of deciding unpopular cases hard when a judge has to go back on the campaign trail.

Most judges aren’t used to articulating broad policy statements because judging is a complex task based on the specific facts of the case and a long history of case law, according to Matt Menendez, counsel at the Brennan Center for Justice, a nonpartisan policy institute in favor of impartial courts.

They also may not be used to pitching their ideas to the public, said Joseph DiSarro, chair of the political science department at Washington & Jefferson College.

“This is not a race that has a Donald Trump in it,” DiSarro said. “Typically the people running are not media people.”

Judicial candidates are limited about what they can say. They aren’t allowed to talk about how they might rule in a future case, but the U.S. Supreme Court said they can talk about political issues.

The most common system of choosing judges — done in 22 states — is to evaluate them by a bipartisan commission, which then can make nominations to the governor. Governors appoint judges without a commission in four other states, and judges are elected by the Legislature in the remaining two.

Any process to elect or nominate judges, Dimino said, is a political process. It may just be the difference between a judge saying things the public wants to hear versus what the governor wants to hear.

Raising money during a judicial campaign can introduce the appearance of impropriety.

In a 2013 poll by the Brennan Center for Justice, 87 percent of respondents said they thought campaign contributions had some or a great deal of influence on the decisions that judges make. Seventy percent thought it was a very serious problem for judges to take campaign contributions from a business or attorney that might have a case before that judge.

“The public perception when this much money is involved is that justice is for sale,” said Suzanne Almeida, program director at Pennsylvanians for Modern Courts, a nonpartisan advocacy group for fair and impartial courts. “Regardless of whether that's true, if that's what people are seeing, that's problematic.”

PublicSource will have more details in the coming weeks about the millions in campaign contributions raised by candidates and hundreds of thousands of dollars already spent in the first two weeks of TV ads.

It’s easy for voters to find out where a candidate went to law school or how many years they have served as a judge or lawyer. But when voters try to make an informed decision, it’s hard to find insightful information, such as a candidate’s judicial philosophy or their reputation among other lawyers and judges.

“They tend to be extremely low-information races for voters,” Menendez said. “I think most people don't have a very good understanding of what makes a good judge or a bad judge.”

And in the case of these elections, it may not be the fault of the voter.

Three-fifths of registered voters in Ohio said the reason why they don’t vote for judges is because they didn’t have enough information about the candidates, according to a 2014 University of Akron survey.

With the lack of information, television advertising by candidates or outside partisan groups, such as the U.S. Chamber of Commerce or the AFL-CIO, can be more effective in judicial races.

Typically, she said, these groups buy a lot of advertising right before Election Day, when more voters are paying attention and candidates may not have enough time to respond.

Almeida, of Pennsylvanians for Modern Courts, said it’s difficult to prove a cause and effect from campaign contributors and decisions in cases. It’s impossible to know whether the judge would have voted that way regardless of the support or contributions.

Judicial candidates face the reality that campaigns cost money and that money has to come from somewhere. And the group with the most at stake are other lawyers.

Lawyers who frequently argue in front of the state Supreme Court want to establish a friendly relationship with judges by contributing. They want judges to know they may share similar opinions on important issues, Almeida said.

“It's just like contributing to a legislator,” she said. “You want someone who will work for you.”