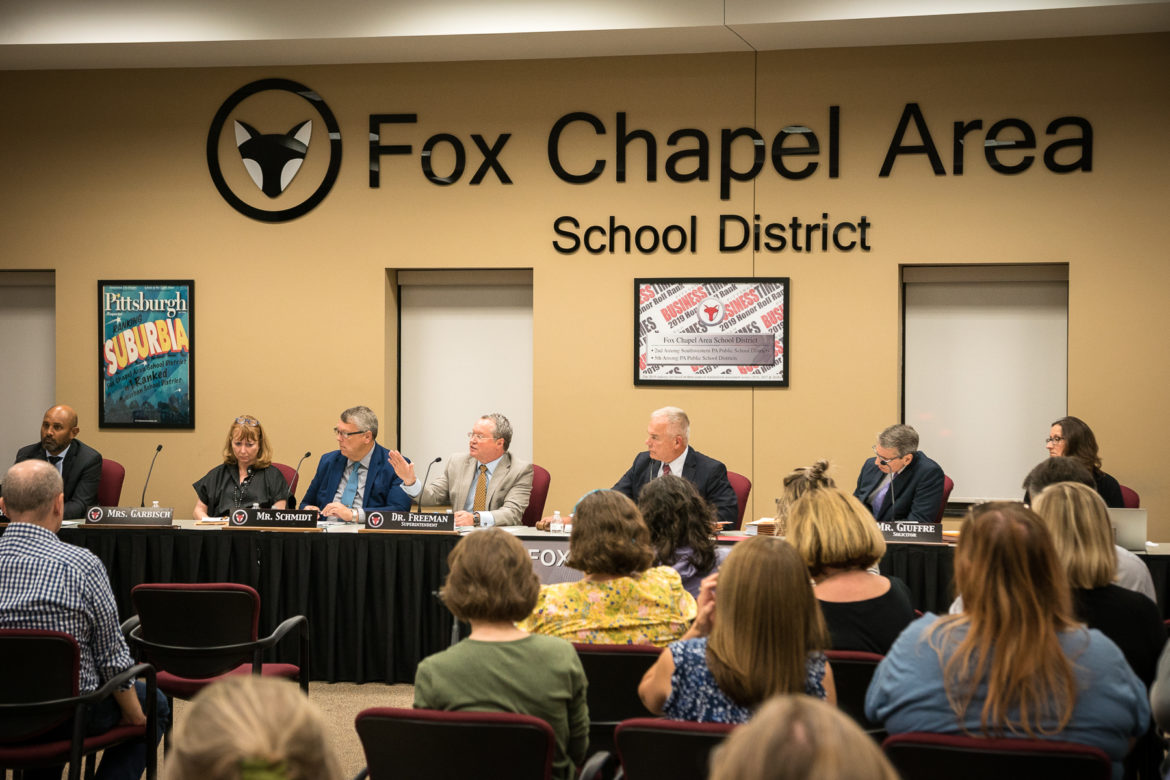 Updated 9/11/19: The Fox Chapel Area School District posted the results of an inquiry into document shredding on the district's website.

The attorney hired by the Fox Chapel Area School District to investigate allegations of inappropriate document shredding has closed his investigation, citing no evidence of wrongdoing based on information he was provided.

But at Monday evening’s board meeting, Superintendent Gene Freeman called for another investigation into a specific allegation that he was involved in pressuring employees to destroy documents to avoid disclosure under the state’s Right-to-Know Law.

“I want my name cleared. I’m going to retire in June and I’m not going out with a cloud over me,” Freeman said.

Butler attorney Thomas Breth was hired by the district this summer to investigate allegations that district records had been improperly shredded on June 18. The investigation cost the district at least $10,000 and spanned two months.

There is still no public information about which records were removed from the district central administration office and later shredded. District officials said there is no log identifying those records, only a retention schedule that lists records in categories, with guidance on when to destroy them.

Breth, an attorney with Dillon McCandless King Coulter & Graham, told the board Monday that there was no evidence that employees were pressured to shred records inappropriately. He said the call to schedule the June 18 pickup had been made by office staff on June 12 when shredding bins were becoming full.

But he acknowledged that by the time he started his investigation, the two bins of records taken from the district administration building on June 18 had already been shredded.

“I think we would all prefer to have the documents in the bins and we could come together to open them up … but that was not the case at least with my involvement at the start of the investigation,” Breth said.

Concerns about the shredded documents were first reported in a July 18 PublicSource story on transparency issues in the district.

Breth said his investigation was hampered by the fact that board member Edith Cook, who reported to the board concerns she received about the shredding, did not cooperate with him. Cook said Solicitor Paul Giuffre asked her for the names of individuals who made reports to her and that she would not say to protect their identities. She said an investigation into whether the documents were appropriately shredded required only a check of what was in the bins.

Cook said she did not learn until the Aug. 12 executive session of the board that the documents may have been shredded shortly after they were taken from the district. 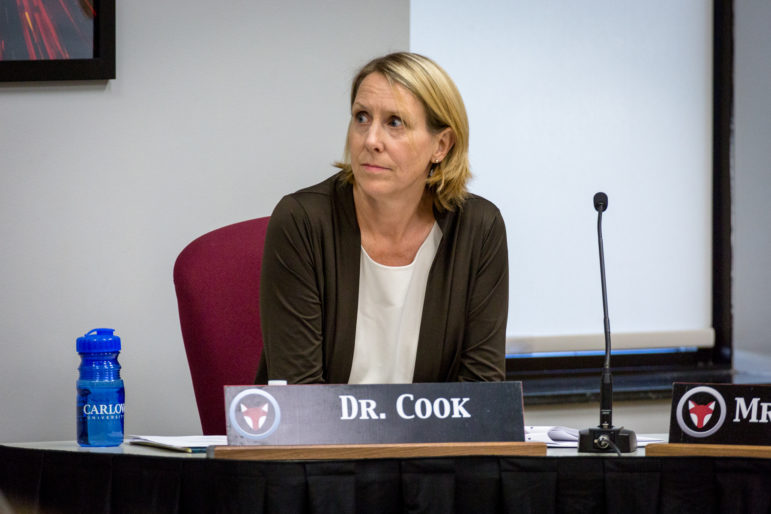 But at Monday’s meeting, John Klamut expressed concerns about how he and his wife were targeted. Klamut has spoken out about district issues in the past and has asked the board to conduct more public deliberation.

“As U.S. citizens, we should be able to raise concerns and ask questions about our government and public schools without fear of being questioned by lawyers for doing so,” Klamut said.

“Because we care about education, fiscal responsibility, transparency, respect and checking abuses of power we have attended school board meetings, raised concerns and asked questions. Now we feel tracked down, singled out, threatened and intimidated.”

Klamut received an apology from Breth later in the meeting, but not an explanation as to why they were contacted.

The shredding investigation came to light at the Aug. 12 school board meeting when the board voted retroactively to hire Breth as special counsel in an investigation. At the time, the board did not release any details of what the investigation was about or how much it would cost the taxpayers. 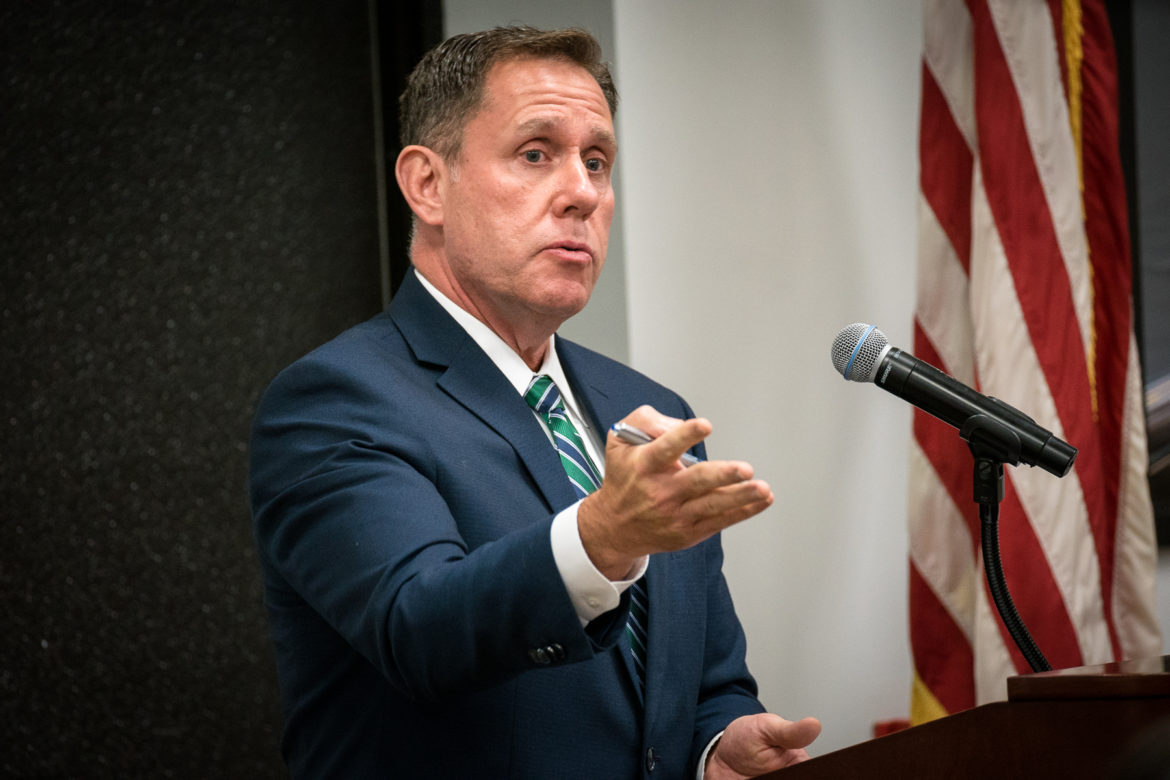 Thomas Breth, an attorney with Dillon McCandless King Coulter & Graham, was hired by the Fox Chapel Area School District this summer to investigate allegations that district records had been improperly shredded on June 18. (Photo by Nick Childers/PublicSource)

But on Sunday, in a detailed social media post that has since been taken down, Cook acknowledged that she asked the district to investigate what documents were sent for shredding on June 18 after hearing concerns that some of the documents were being destroyed to circumvent the Right-to-Know process.

According to Cook’s account, she wanted the district to investigate what was in the bins,  believing the documents were still intact. She shared a June 28 email from board president Terry Wirginis to the rest of the board stating that he had hired Breth to investigate the allegations.

At Monday’s meeting, Breth explained that a representative of the moving company incorrectly reported to the district the documents were still in the bins the day after they were taken. Giuffre then ordered that they be kept intact. But then the employee called back to report to Giuffre that the documents had been shredded. A certificate of destruction said they were destroyed June 18.

Breth said he interviewed “eight or nine” district office staff to see if any were pressured at any time to destroy documents and none reported that they were. He characterized the employees as “honest,” “forthcoming” and knowledgeable about their responsibilities with confidential documents.

He said he believed the matter should be considered closed. Breth said his written report would be made public by the board. But neither Wirgnis nor Giuffre would provide a copy after the meeting. They said it would become available eventually on the district’s website. (Update: The school district has since made the report public).

Freeman said he deserves an additional investigation to clear his name of allegations in Cook’s social media post that she received reports that he specifically ordered documents to be shredded.

Gene Freeman, superintendent of the Fox Chapel Area School District, raising concerns about due process in accusations made about the shredding of district documents. (Video by Ryan Loew/PublicSource)

Freeman said anytime a board member accuses a district staff member of wrongdoing it invokes a due process procedure for the employee or employees. Freeman said her initial report was that there were reports the district office staff may be inappropriately shredding documents.

But in the Sunday social medial, Freeman said Cook repeated reports that the superintendent was pressuring employees to shred documents.

“You’ve now infringed on my due process,” Freeman said.

At times during the meeting, attendees shouted comments at the board, prompting  board member Eric Schmidt at one point to say the community needed to think about the reputation of the district and how it may affect the upcoming superintendent search. Schmidt suggested candidates may be hesitant to come to the district given the animosity expressed between audience members and the board.

The board is planning to embark on a national search for a new superintendent in December. It is expected to take five to six months.

“I think the reputation of the school district speaks for itself. I don't think this is scaring anyone off,” said Marybeth Dadd, who is the only candidate running for the board seat representing region 3.

“This is an involved community who wants transparency,” Dadd said, “and that's what they're asking for from the board."