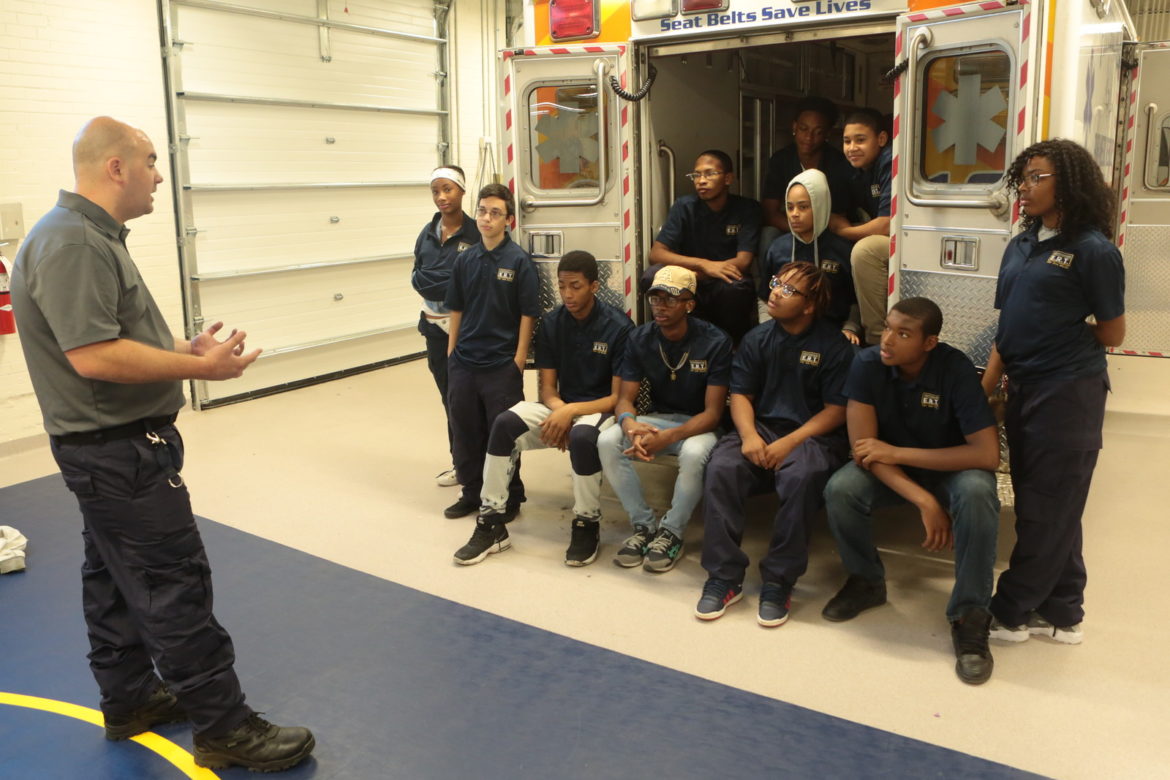 Many years ago, the Pittsburgh police force was truly diverse. It took a federal injunction four decades ago to make it so.

In 1975, the a federal court judge ordered the city to hire one white woman, one black man and one black woman for every white man hired as an officer. Pittsburgh community activist Tim Stevens believes federal judge Gerald Weber’s order — popularly referred to as a consent decree — was effective and necessary.

“I understand at one point we actually had one of the highest percentages of women on the police force across the country, particularly in leadership,” said Stevens, chairman of the Black Political Empowerment Project, “and for awhile we actually had a reasonable percentage of African Americans on the police force that was beginning to more reflect the percentage of African Americans in Pittsburgh.”

Today, traces of that federal order are gone.

The African-American women, the ones that came in the beginning, are “all pretty much retired now, ” executive director for the Citizen Police Review Board Elizabeth Pittinger said, “which is part of the problem because they have not been replaced.”

A federal judge ended the quota policy in 1991, and Stevens said the result was what he calls “the rewhitening” of the Pittsburgh police force.

Today, the bureau is predominantly white and male. The agency has struggled for years to become diverse again and mirror the breakdown of the city’s population. Lack of diversity is not just a Pittsburgh problem. But it is pertinent. Events in Ferguson and Baltimore triggered a national conversation about the composition of police forces, accountability and power dynamics between police and residents.

Studies suggest that diversity among police officers is important for developing relations in the community, for deep understanding of issues, for establishing trust and rapport.

Stevens requested statistics from the bureau years ago when former police Chief Nate Harper was still at the helm and said the statistics showed black recruits to be in the lower single digits over the last 10 or 11 classes.

“Some classes had no blacks, some had one…hardly any Hispanics, or Hispanics would be one or two at the most,” he said.

Stevens raised the issue with the ACLU, which he said led to a federal discrimination lawsuit being filed August 2012 against the city over the hiring of black officers.

“It shows you that the affirmative action effort actually was effective,” he said, “and it was necessary. Because once that went away, so did the integrated nature of the Pittsburgh police force, both in terms of females and with African Americans.”

Years since the injunction ended, Stevens said the bureau hasn’t come close to representation on the force with new recruits relative to the black population in Pittsburgh.

In fact, the lack of diversity has turned some people away.

Lack of diversity ‘weird’ and ‘discouraging’

Stevens believes historical and cultural issues factor into the number of black people who apply for police jobs. Decades of negative interactions between the police and the community. The fatal shootings of black men at the hands of white police officers.

“The history almost predicts the future,” he said.

So while some black residents may want to be a police officer, he said they could feel like they’d be betraying their community. Stevens said it wouldn’t be a betrayal but rather a service to their community, so there’s more of a cultural understanding across the races within the police force itself.

“The history almost predicts the future."

Marlin Avant wanted to perform that service. He dreamt of becoming a Pittsburgh police officer, like his dad had been for 20 years in Braddock. When he applied in 2011, he was the only black recruit.

A Navy veteran who served in Iraq, Avant, now 39, figured that as a minority he could continue to serve, this time in his community. He didn’t make it into the 2009 class. In 2011, he received a letter inviting him to try again.

Avant passed a fitness exam and moved to Garfield to meet the city’s residency requirement. But being the only black recruit of 34 weighed on him and ultimately led to his decision not to continue on that path.

“It felt weird and discouraging, I am embarrassed to say,” Avant of Braddock said.

In Avant’s case, he says he purposefully didn’t continue with the program.

“I got kicked out for failing two tests, but the truth is, I failed them on purpose because I just wasn’t feeling it.”

Avant continued the job he already had, working with juveniles and foster children.

Solving the lack of diversity

How to increase diversity in the police force and prevent situations like Avant’s is complicated. One attempt is a program that debuted last month through the Career and Technical Education [CTE] Division of Pittsburgh Public Schools, with help from a $300,000 grant from the American Federation of Teachers Innovation Fund.

The Emergency Response Technology program’s target demographic are students in 10th and 12th grades. At the CTE, in the course of three years, students can get a feel of what it’s like to be a police officer or another public safety job.

The project started this year at Pittsburgh’s Westinghouse Academy. Westinghouse was strategically chosen to host the new program because of its majority black student population and its location in Homewood, a majority black neighborhood that, like the Hill District, has been disproportionately hurt by violence.

“We can help create a pipeline of diverse students that could feed directly into those jobs,” said Angela Mike, executive director of CTE.

Some of the topics students will cover are the rules of Pennsylvania criminal procedures, the training and recruitment process in law enforcement careers, the criminal justice system and its history, and the integrity and ethics expected within law enforcement.

Mike says the city of Pittsburgh has donated more than $25,000 in supplies and equipment, including an ambulance and fire truck, to support the program. Students will also be able to connect with officers as mentors and take related field trips. Before they leave the program, students have the opportunity to earn certifications in emergency medical training [EMT] and occupational safety. School officials are also working with the Community College of Allegheny County to offer the students a way to earn college credits in high school.

The program is open to students across the city, but the bulk of the 16 students who applied and were accepted this year are from Westinghouse. Others came from Perry and Allderdice high schools. Five of them are female.

Community relations and the city’s priority

Stevens said after settling the ACLU lawsuit in 2015, city police officials and the administration came up with an approach that, he said isn’t perfect but, began to show an increase in the number of black people with the first or second class of recruits.

“I know soon after there was beginning to be a difference,” he said. “We must give some credit to the Peduto administration and to current Police Chief Cameron McLay, that they have had, I think, an honest commitment to begin to change what was to what should be.”

The Peduto administration early on showed a commitment for a change in community-police relations verbally and in actions, he said.

“We must give some credit to the Peduto administration and to current Police Chief Cameron McLay, that they have had, I think, an honest commitment to begin to change what was to what should be.”

“In my opinion,” Stevens said, “those appointments began to send a signal that this administration wanted to be more user-friendly, shall we say, or more oriented toward trying to build a new relationship with the community.”

In March, the city announced the new class of recruits to the police academy and that it was made up of 18 percent racial minorities. Among them were seven African-American men, three Hispanic men, one Asian man, 46 white men and five white women.

Katie O’Malley, spokeswoman for the mayor’s office, said the city has several ongoing recruitment efforts to diversify the police force.

These efforts include the city’s participation in career fairs, a fall advertisement featuring the police in Soul Pitt Magazine, and an upcoming ad in Search and Employ, the magazine of Recruit Military. Today, the police bureau is scheduled to be represented at the Homewood Brushton YMCA Career Fair.

Pre-test preparation courses for oral exams are being offered, and the city is also using social media, hosting sessions in different city neighborhoods, creating a mentor program and introducing a recruitment website — JoinPghPolice.com. O’Malley was unable to share traffic numbers or recruitment benchmarks or goals.

Pittinger said local recruitment efforts are great but the city needs to do a better job of recruiting nationwide to widen the net.

“A job fair at a Pittsburgh Public Schools high school should not be your only recruitment event, nor should it be going to the churches on Sunday and recruiting.,” Pittinger said. “Those things should continue, but they need to expand it. And they need to make it very aggressive and make it very attractive for someone to want to come here.”

Stevens said he’s noticed the police are working to project a better image on social media and are interacting positively in social settings with citizens. They have initiated coffee klatches and even held an ice cream day. He said there is a collective interest for the black community to have a more positive perception of the police and for the police not see every young black man as a criminal.

It is in the interest of the police to have a force that’s better received, Stevens believes. It’s also a safety issue. In a community like Homewood, where 98 percent of officers who show up are white, he said, “You almost have a tinderbox just based on that.”