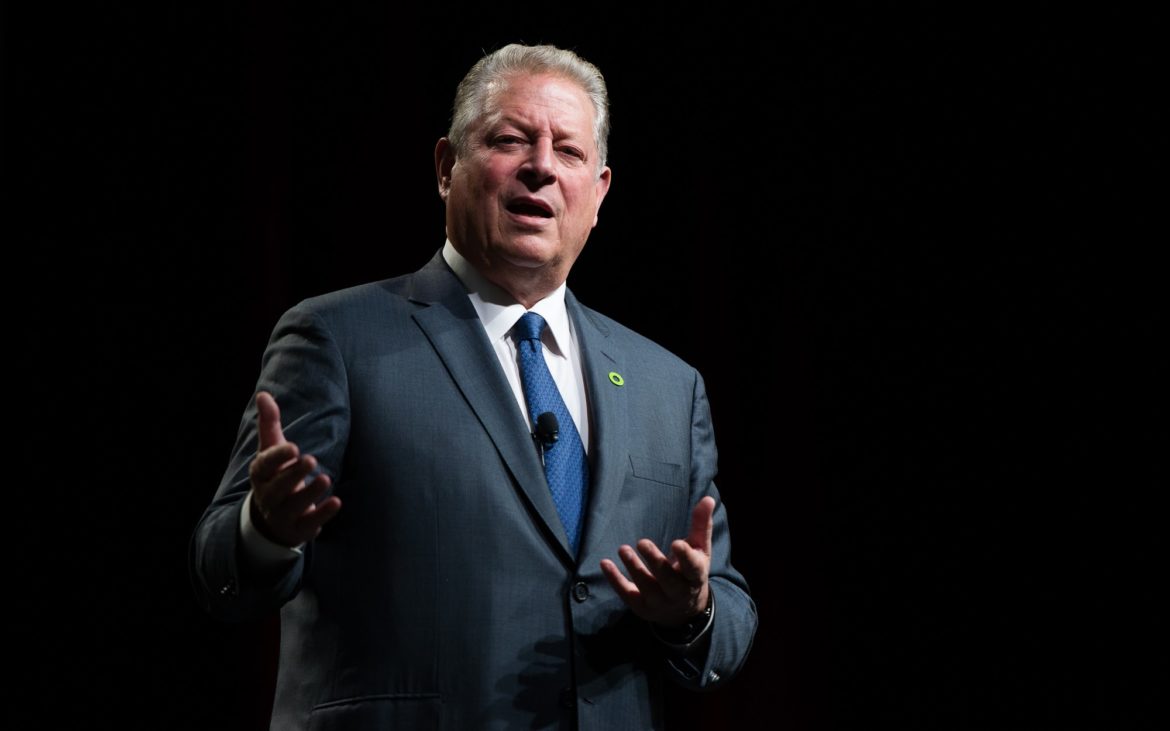 Former Vice President Al Gore is the founder and president of the Climate Reality Project. (Photo by John Hamilton/PublicSource)

It took more than 90 minutes and several hundred slides, but Al Gore finally arrived at the part of the “most famous slideshow in the world,” as it was introduced, where he built a crescendo of hope for the roughly 1,400 people at the David L. Lawrence Convention Center in Pittsburgh Tuesday.

The audience came from all over the world not only to hear the former vice president speak but to also spend three days at the 36th training led by the Climate Reality Project, the largest in its history. The group was founded by Gore after the surprising popularity of “An Inconvenient Truth,” the 2006 documentary film based on his slideshow. The purpose of the Climate Reality Project’s annual training is to equip “climate reality leaders” to inform their communities about the climate crisis and organize action. Gore forewarned the audience that they needed to remain hopeful — and then he clicked rapid-fire through images of disaster after disease after drought, each of which he said can be either directly or indirectly attributed to a warming climate.

After 90 minutes of convincing the audience they had to act, he turned his attention to a question: Could they do anything to reverse course?

Some hope, he said, could be found in Pittsburgh.

The foundation for the hopeful ending to Gore’s story was laid a couple hours earlier by a short speech from Pittsburgh Mayor Bill Peduto, who harkened back to Pittsburgh’s glory days: Pittsburgh steel built America, its skyscrapers and bridges, Peduto said. “We also created air dangerous to breathe, water poisonous to drink.”

“Then Pittsburgh died,” Peduto said. “We died. Our economic heart was ripped out of us.” The unemployment rate was greater than 20 percent, but “out of the ashes,”  he said, Pittsburgh built a prosperous, greener city.

“Whenever somebody says it can’t be done, it doesn’t work or it’s not a real approach, tell them to look at Pittsburgh,” Peduto said. “…with the worst air and water quality in the country. Let them see it can happen, so they know they can be a part of it.”

Picking up where Peduto left off, the last 30 minutes of Gore’s speech was devoted to the exponential rise of the solar and wind energy, which Gore said has taken off much faster than anyone had predicted just 15 years ago.

The frequency of applause in the audience grew, as Gore introduced each new sign of environmental hope. The city of Beijing committed to electric taxis, and India committed to sell only electric cars by 2030. France, he said, would outlaw any gas or oil exploration on French soil. And Gore said he just heard about Tesla’s plans to build the biggest building in the world that would manufacture half the world’s batteries, which would power all those electric vehicles. With Pittsburgh's bridges as a backdrop, attendees of the Climate Reality Project's three-day training talk during lunch at the David L. Lawrence Convention Center. (Photo by John Hamilton/PublicSource)

Fred Brown, the president and CEO of the Homewood Children’s Village, said he hadn’t seen Gore speak about climate change for more than a decade. He still remembers a video from then of people whose island homes had been submerged underwater.

But this time, he said, the crisis seemed more urgent. “The speed and velocity of change is much faster...” Brown said, “and despite that, there’s hope on the horizon that if we double down and get serious about being radical about change, then we can at least stop the bleeding.”

Brown thinks that Homewood could, with reinvestment, serve as a beacon of what’s possible. If the city decided to reinvest in the declining community of Homewood, he said, it could also choose “not to rebuild it traditionally.”

People from all over

Maria Kendig runs a beer and wine distributor with her husband in Saline, Michigan. A few months ago, she watched Gore’s 2017 documentary, “An Inconvenient Sequel,” in which she learned about Gore’s climate organization.

Kendig called the youngest of her three sons because of his interest in green issues. She said she wanted him to know that their family would put their wallet and time behind what they said they believed in — so they applied for the Pittsburgh conference together and traveled more than 200 miles to attend.

They had been grouped together by where they lived. Kendig and her husband, Eric, sat with others from Michigan: a professor of geriatric medicine who was worried about the elderly dying in the floods in the South; a community college student working  in community gardens; a realtor who wanted to learn to discuss climate change using facts and not emotions; a Michigan State student who introduced himself by saying his generation will be the first to see the worst impacts of climate change.

When they return home, Howard Mock, one of 75 “mentors” who had already been trained and who sat with the Michigan group, will be charged with keeping in touch with each of them to help and encourage them to take action.

“People do feel helpless. What can they do, you know?”

They will join more than 12,000 others who have already been trained by the Climate Reality Project in 36 countries across the world. The group hopes that they would take Gore’s PowerPoint presentation and tailor the slides to their own communities.

It's important to note that multiple studies published in peer-reviewed scientific journals show that at least 97 percent of climate scientists agree climate change is real and that climate-warming trends over the past century have been caused mainly by human activities.

Denise Kearns, a communications professional at the table from Ann Arbor, said her brother gave her a strange look when she told him she was attending a climate change training.

“You do believe in climate change?” she asked him.

She had come to this training, so that she might have a better answer to that question next time.

Gore’s 2017 presentation started with the same two pictures of the Earth from outer space that started “An Inconvenient Truth” in 2006. But if part of the impact of his original movie was how surprising his images were, his latest presentation was also a symptom of a time in which we are inundated with images of natural disaster.

Gore included the now-famous photos of nursing home victims trapped by the floods of Hurricane Harvey in Texas, and a well-known picture from earlier this year of a Washington man continuing his golf game, ignoring the forest fire in the background.

His presentation now also makes ample use of video to dramatize the massive events in human terms. He showed footage of a woman and her dog rescued from a car during the Houston floods; a man in Oklahoma jumping out of his tractor before it was engulfed in flames; and a burning house floating down a West Virginia river. Gore still peppered his presentation with data and graphs: Not only is air pollution killing thousands every year, but those deaths led to a 2.4 percent drop in GDP [gross domestic product]. Gore became unexpectedly excited mid-sentence about “Batteries! What an industry of the future!” as if, in the flood of information he was cycling through, he remembered brief nuggets of the excitement he had upon first learning it all.

In fact, some of the presentation he had just learned. A couple slides, about global weather patterns, were dated October 17, 2017, which he said he had added earlier in the morning. He added slides about Pittsburgh’s increasingly hot summers and how there are now twice as many clean energy jobs as fossil fuel jobs in Pennsylvania. He also cited Pittsburgh and Allegheny County’s persistent F grades for air pollution.

Gore included what he said were about 500 slides in this “ long version.” But the audience would have to wait until the next day to get the 10-minute condensed version of his talk, he said.

At the margins of the talk, Gore and several of the introductory speakers, emphasized that, in addition to fighting a war against climate emissions, there was another parallel war on truth.

“We are in a very difficult time with President Trump,” said Ken Berlin, the president/CEO of the Climate Reality Project. “He’s doing very difficult things with climate change.”

“We seem to inhabit a world where opinion, often misplaced and broadcast through social media, is mistaken as fact,” said Andre Heinz, the chairman of the board for The Heinz Endowments. Former Vice President Al Gore's presentation on climate change included about 500 slides, a few of which he added Tuesday morning about Pittsburgh. (Photo by John Hamilton/PublicSource)

Gore said the issue wasn’t “political let alone partisan,” but then quoted a World War II scholar who said power had supplanted truth in Nazi Germany. “I’ve been reminded of that recently all too frequently. But we are not going to get into that,” Gore said to laughter. “ We may step into that a little bit, I can’t help it.”

With his presentation Gore had answered the question about whether change was necessary and whether it was possible, he said. And now the final question, he posed, is, “Will we? I’m sure we will. But the question is: Will we do it quickly enough?”

And then, after more than two hours, Gore turned from policy details and urgent crises toward poetry.

“After the final no, there comes a yes,” Gore quoted Wallace Stevens, “and on that yes the future world depends."