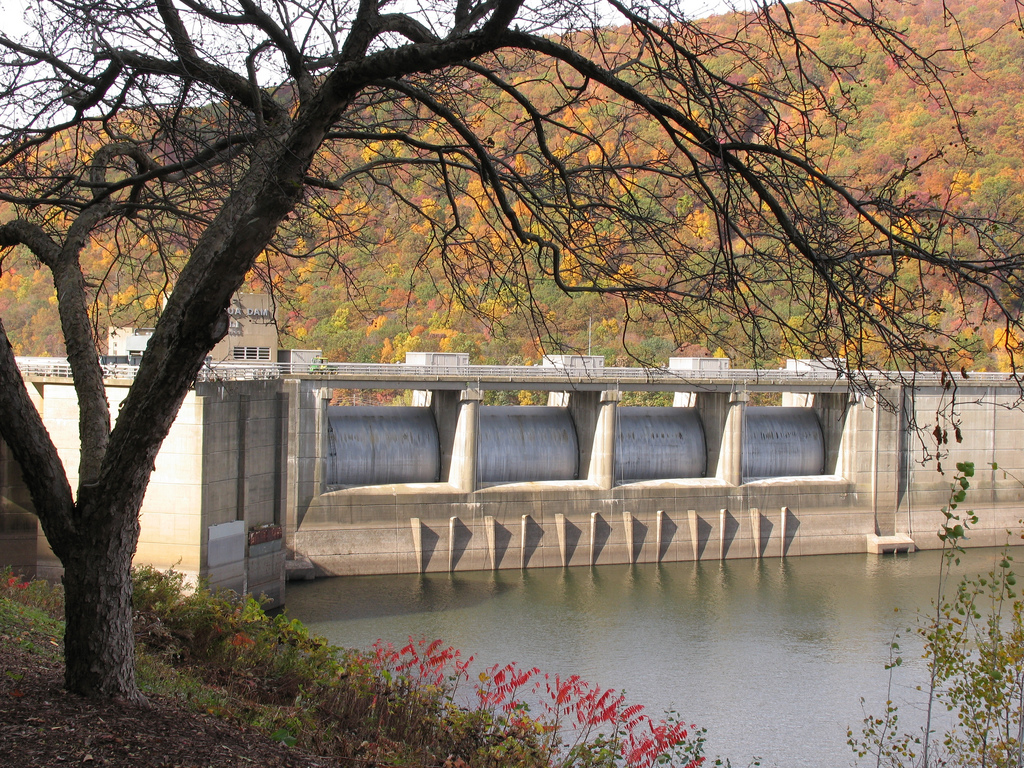 Update: In an email to PublicSource on July 29, Neil Shader, spokesman for the Pennsylvania Department of Environmental Protection [DEP], wrote that there are 43 dams in Pennsylvania that produce power. That number includes the 26 noted by the Federal Energy Regulatory Commission. According to the DEP, while the agency oversees more than 3,400 dams, there are thousands more that are unregulated because their size is insignificant.

Hydropower infrastructure is everywhere in the United States, and it could be tapped to significantly boost the nation’s energy supply, according to a new government report, so why isn’t it being used more?

The U.S. Department of Energy’s Hydropower Vision report found that U.S. hydropower capacity could increase by almost 50 percent by 2050. That would mean growing to 150 gigawatts (billions of watts) of generating and storage capacity from the 101 gigawatts that the nation’s hydropower infrastructure currently produces.

If the Department of Energy’s vision for the future of power comes to fruition, Pennsylvania’s waterways could be generating much of the load.

According to the Pennsylvania Environmental Council (PEC), Pennsylvania ranked sixth in terms of hydropower potential, with an estimated 679 megawatts of potential capacity. This number doesn’t include potential generation at municipal or privately owned dams, conduits, and other water features, nor does it include increases in efficiency and generating capacity for dams that currently produce power.

Hydropower potential capacity is a combination of instantaneous power generated by moving water that spins turbines and water that is stored in a reservoir at a higher elevation by a pump.

Last year, hydropower accounted for 6 percent of the total U.S. power supply, making it the largest source of renewable energy nationwide and the fourth most used energy source overall, behind coal, natural gas and nuclear power, according to the Energy Information Administration.

The potential exists for a 50 percent increase in hydropower in part because only about 2,000 of more than 80,000 dams in the United States are currently producing power, according to the Department of Energy (DOE) report.

Though Pennsylvania has more than 83,000 miles of rivers and streams, PEC reports that only 1 percent of the electricity used in the state comes from hydropower.

An April 2011 report by the U.S. Department of Agriculture estimated the annual hydroelectricity production in Pennsylvania has the potential to increase by 336 percent.

Lindsay Baxter, the PEC program manager on energy and climate, said: “We have such abundant water resources. The topography of much of the state is good for hydro, and also our industrial facilities often have flowing water that could be utilized for hydro.”

According to a December 2015 presentation by the National Hydropower Association and data from the Federal Energy Regulatory Commission (FERC), there are 26 active hydropower projects in Pennsylvania capable of producing more than 2,700 megawatts of energy, including pump storage.

Pump storage uses power to move water against gravity so that in times of low flow or excess demand, the stored water can be released.

The state has nine additional projects, pending FERC licensing, that could provide a combined 137 megawatts, and 12 more hydropower projects in the early stages of approval that could add 319 megawatts to the grid. Eight of the nine pending hydro projects would generate power from existing dams in Western Pennsylvania.

Bob Irvin, president of American Rivers, a group founded to protect the nation’s rivers, told the Washington Post that any increase in hydropower should be done carefully.

“There are definitely adverse impacts that have to be considered. … Whenever we build a dam, we destroy a river in one form or another,” he said to the Times.

While hydroelectric projects might set off red flags for environmentalists, it is important to note that the DOE report indicates roughly a quarter of the predicted nationwide growth can come from “upgrades to existing plants, adding power at existing dams and canals, and limited development of new stream-reaches,” with the remaining 75 percent coming from increased storage capacity.

Likewise, Baxter said PEC focuses on existing dams and the organization remains attentive to community and environmental impacts that groups like American Rivers caution against.

“If there are ecological or recreational or community impacts with a project, we might not necessarily think that it should go through,” Baxter said.

“I think the biggest concerns that environmental organizations typically have related to hydro is often when it is gonna be a new dam being constructed and that is not something that we would advocate for,” she added.

Instead, PEC focuses on smaller projects at facilities that are owned by a municipality, county or state agency.

Baxter said the PECl is currently conducting a feasibility assessment in partnership with the Department of Conservation and Natural Resources on three state parks in Western Pennsylvania: Ohiopyle, Moraine and McConnell’s Mill.

“Again, this is existing infrastructure. So it’s not making changes to what folks are using for recreational and outdoor needs, but it’s looking at whether you can take something that’s already there and add some generating capacity to it,” she said.

The Hydropower Vision report estimates that if the hydropower industry does increase its output by 50 percent, the United States will save roughly $209 billion due to avoided problems from greenhouse gas emissions that would occur if that energy came from non-renewable sources.

The DOE also estimates that 30 trillion gallons of water withdrawals used in cooling for fossil and nuclear energy generation would be avoided, and an additional $58 billion could be saved on health care as a result of lowered air pollution from hydropower generation.

“It’s certainly better than burning fossil fuels, but it’s not without its own issues as far as climate change,” Irvin told the Times, explaining that reservoirs created by dams can produce methane and alter local ecosystems.

Baxter said many of Pennsylvania’s dams are left over from previous industrial uses or even agricultural uses for irrigation. If those dams were not well-placed or well-constructed to begin with, they can have negative impacts on fish populations.

“Sometimes there can be a lot of ecological benefits from removing one of those dams,” she said. “So we are huge supporters of the Fish and Boat Commission and groups like American Rivers to look very carefully at what dams deserve to be removed.”

Despite its belief in hydropower, Baxter said the PEC wouldn’t advocate keeping a dam if it is adversely impacting the local community or ecosystem, simply to generate power.

“I think that we all agree that there are dams that do not pose significant hazards that are going to be in place for many, many years, and those are really the sites that deserve to be prioritized for development for power,” she said.