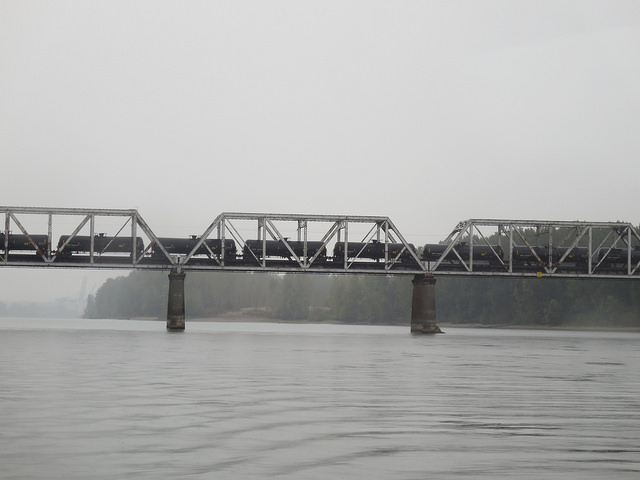 A train conductor on a BNSF Railway train that derailed and partially blew up in Casselton, N.D., two years ago said the railroad's negligent safety practices caused his injuries. It's one of two lawsuits from railroad workers involved in the accident.

The BNSF train that spilled 20,000 gallons into the Mississippi River on Nov. 7 could have traveled up to 55 mph on the stretch where it derailed in Alma, Wisc. If it had been equipped with five more full tank cars of ethanol, it would have been required under new federal rules to travel at 50 mph in most areas and 40 mph within a 10-mile radius of "high threat urban areas designated by the U.S. Department of Homeland Security," according to McClatchy Newspapers. The Wisconsin train was only going 26 mph when it went off the tracks, but could have, legally, been traveling much faster.

A CSX official said the railroad will install the technology on Pittsburgh-area lines by 2018, but it won't be operational until 2020, according to Channel 11 News. Positive train control automatically stops or slows trains down if an engineer is speeding or misses a signal. The safety feature could possibly have prevented the deadly May Amtrak crash in Philadelphia. In October, Congress decided to extend a Dec. 31 deadline mandating that railroads install the technology by three years.

The former mayor of Cleona, Pa., decided to have an emergency siren installed in the small city out of concern for crude oil tank cars parked along Norfolk Southern railroad tracks near a residential area.

Canadian Pacific Railway's bid to buy Norfolk Southern for more than $28 billion would create a rail network spanning North America. Norfolk Southern officials, however, seemed to scoff at the offer.