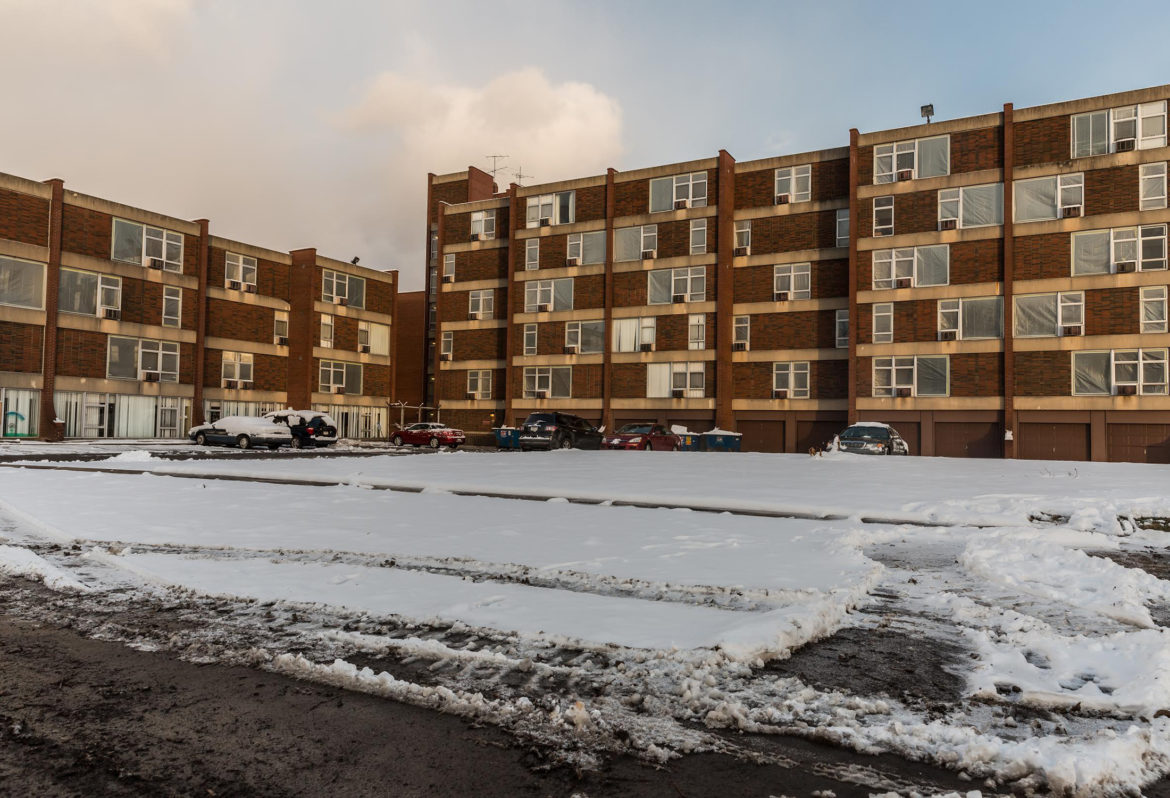 Update: On Thursday morning (Feb. 23, 2017), the City of Pittsburgh and representatives from LG Realty Advisors met in the City-County building to try to resolve the lawsuit brought by the city. After private deliberations, the city and Pennley Park South, an LG subsidiary, agreed to continue negotiating in private, to meet again in court on March 3 and to refrain from public comment.

“I’d like to thank the parties...for agreeing today to try to refrain from comment and hopefully reach a settlement,” said Judge John McVay, who is overseeing the case. “I don’t know if we will, but I do believe that sometimes we make it worse in the courtroom and the media.”

The City of Pittsburgh is taking LG Realty Advisors to court for making residents live in squalor and endure construction noise during their final weeks in the condemned Penn Plaza Apartments.

“Our lawsuit is about holding the owners of Penn Plaza accountable to the promises they made to the city,” said Kevin Acklin, the chief of staff to Mayor Bill Peduto.

The lawsuit, filed near close of business on Wednesday, comes in the wake of a rally on the steps of the City-County Building yesterday. At the rally,  Penn Plaza residents aired complaints about the apartments not being heated, odors throughout the building, rodents and continued construction in spite of the commission’s ruling.

The residents’ allegations, if substantiated, would violate an agreement — signed by Pennley Park South, the city, and the residents association of Penn Plaza — that promised the firm would maintain the apartments at “decent and sanitary levels” as long as tenants remained.

The memorandum also said Pennley would assist residents monetarily in their relocation.

“We have been and will remain in compliance with the memorandum of understanding,”  Kamin said.

At 9:30 a.m. Thursday, there will be a hearing over an emergency motion by the city for a preliminary injunction, according to a letter signed by the assistant city solicitor. The injunction, if granted, would mandate the alleged poor living conditions at Penn Plaza be addressed immediately — to avoid delays as a court case plays out.

Acklin said inspectors showed the city enough evidence of code violations that they felt comfortable moving forward with a lawsuit.

According to the lawsuit: "There is a substantial risk of immediate and irreparable physical harm to the residents. Defendant’s conduct to date demonstrates the potential dangers and indeed the harm that has already been inflicted on the residents’ health and well-being."

With the March 31 deadline for residents to vacate their apartments approaching, Peduto released a letter, asking East Liberty landlords and developers to help find homes for the remaining residents.

“If you each are able to accept just a few residents, we can make sure that every resident of Penn Plaza is treated with respect and are provided the opportunity to continue to live in East Liberty,” Peduto wrote in the letter.

Peduto CC’d numerous landlords in the East Liberty area, such as Walnut Capital, Mosites, and the Bloomfield-Garfield Corporation, some of which the city had made “co-investments” with.

Acklin said participation would be voluntary, but added, “We all have a moral responsibility to make sure people aren't left in the cold.”

Rick Swartz, executive director of the Bloomfield-Garfield Corporation, said the BGC has previously relocated a few Penn Plaza families to new housing. Swartz, however, was not aware he had been named in the mayor’s letter four hours after the letter was released to media.

He said BGC hasn’t been in recent contact with Penn Plaza residents or groups working on their behalf. He was unsure if this strategy would be effective because, at this time of year, landlords typically have few vacancies.

“We would have to look to see if we have any vacancies on the horizon,” Swartz said. “If we do, we’d be more than happy to try and accommodate folks.”