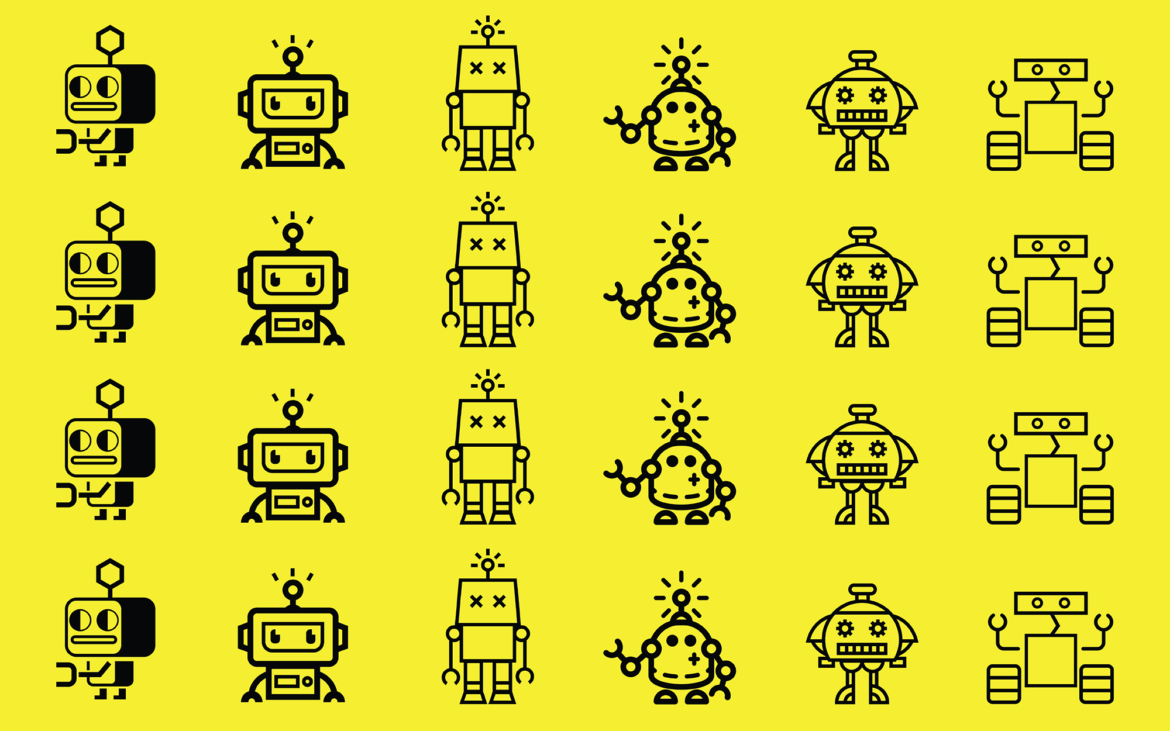 When Randy Sargent saw “Stars Wars” as a 10-year-old, he didn’t come home swinging broomsticks around the garage and flying imaginary X-Wings under the covers. He wanted to make robots like C-3PO and R2-D2.

And like the cheery, sassy sidekicks of Luke and Leia, Sargent — now a senior systems scientist at Carnegie Mellon University — wanted his robots to work alongside humans, to help them. He thought he got that chance in the late 1990s, when he helped build an automated blueberry-sorting machine for a Washington farm, which blew green, unripe berries away from the ready-to-eat blue ones.

Sargent visited Washington to test the system, only to find out that the farm’s owner wanted to try it out next to the migrant workers who picked the blueberries every season. Sargent was confused: The workers were socializing and enjoying the work — turns out blueberry-sorting wasn’t as dull as he thought.

“I had this idea in my head that we're automating a job that no one wants to do — it's a really hard job, it's very boring and tedious,” Sargent said. “What I might've called a dull job, they weren't finding dull at all.”

The experience led Sargent to rethink his work, and he found a new job at NASA building robots to send to Mars. But he never forgot that day at the farm and the workers who probably had to look elsewhere for work the next summer. And after reading the recent National Bureau of Economic Research (NBER) report on automation’s effect on U.S. labor markets, he’s worried about Pittsburgh’s jobs.

Among the little Pennsylvania-specific information presented, NBER shows that Western Pennsylvania’s exposure to robots is is among the highest in the nation.

Looking at the upswing in industrial robot usage in U.S. labor markets between 1990 and 2007, NBER’s working paper found that one robot per 1,000 workers decreases the total number of employed working-age people by 0.34 percent, and wages by 0.5 percent. This means that one new robot could replace nearly six workers. Though as the report’s critics have noted, NBER hardly accounts for regional differences, focusing on automation’s effect on the country.

While NBER’s research is geared toward automation in manufacturing, robots in other industries could also displace workers. Many automation engineers in Pittsburgh — lately a poster child for innovation and robotics — insist that robots merely complement humans’ efforts in the workplace, but industry experts like Sargent say automation could drastically alter the city’s wages and employment rate. With CMU’s multimillion-dollar manufacturing innovation facility coming to Hazelwood, this could be an issue sooner rather than later — if it isn’t already.

While the nation’s eye might now be on Pittsburgh’s tech developments, robots have been a familiar sight in Pittsburgh workplaces for almost a century.

Westinghouse Electric and Manufacturing Co. built Herbert Televox — which looks like a life-sized “Operation” dummy — in the 1920s, with the ability to answer a telephone call and speak a few words. Just last year, the Pittsburgh Steelers introduced a roving, 150-pound tackling dummy for players to beat up during practice without injuring a teammate. Not to mention the more obvious sights, like self-driving Ubers whirling around Oakland and self-checkout stations at CVS drug stores and Giant Eagles.

With robots becoming more common in offices, stores and factories, some automation-using Pittsburgh companies say robots don’t put its employees out of work, even in industries that seem more susceptible to job loss.

Although Giant Eagle wouldn’t make its distribution systems manager, Robert Kuchta, available for an interview, spokesperson Dan Donovan wrote in an email that Seegrid’s technology allows workers to focus on customers. He added that the VGVs have not “had an adverse effect on staffing levels.”

Developed by Coraopolis-based Seegrid Corporation, a vision guided vehicle, or VGV, is photographed at a Giant Eagle facility in Crafton. (Photo courtesy of Seegrid)

If you ever visit the VA — or other local hospitals, like Magee-Women’s Hospital — don’t be surprised if you see TUG dashing through halls and riding up and down elevators.

Produced by local robotics maker Aethon, TUG looks like a mobile 5-foot-tall toolbox, picking up specimens from various parts of the hospital and delivering it to labs for analysis. Aethon designed TUG to decrease the risk of losing or breaking specimens, as well as to save time by choosing the most efficient way to make deliveries.

“It definitely makes people's jobs easier,” Schupay said. “It actually frees them up to do more tasks that would not be as easily accomplished by a robot.”

If you walk into any intro-level CMU robotics class, Sargent says, you’ll see a slide that tells you robots do the three D’s of labor: dirty, dangerous and dull.

This includes a large amount of manufacturing jobs, work that requires heavy lifting and tasks that involve dealing with hazardous material. Of course, there are countless manufacturing companies in Pittsburgh, the largest among them including Westinghouse Electrical Co., Heinz Co. and Kennametal Inc., which reportedly eliminated 1,000 people from its ranks last year. According to the Bureau of Labor Statistics, the number of manufacturing workers in the Pittsburgh region dropped from 100,300 in March 2007 to 83,400 in March 2017.

“It definitely makes people's jobs easier...It actually frees them up to do more tasks that would not be as easily accomplished by a robot.”

And while many argue that automation creates new jobs that never existed before, Sargent referenced Uber’s poaching of 40 CMU researchers to develop autonomous vehicles last year. While 40 new jobs may have been added at Uber, the resulting efforts could someday threaten way more than 40 Uber drivers’ jobs nationwide.

Uber spokesman Craig Ewer said there would still be a mix of drivers and self-driving Ubers even when the technology is available at a larger scale.

“This is because of the limits of self-driving global software and the skyrocketing demand for better transportation that drivers are uniquely able to address,” Ewer said. “And the past has shown that technology creates new work opportunities, while disrupting existing ones.”

Sargent’s statements, however, align with a 2015 study by Georg Graetz and Guy Michaels referenced by the NBER paper, which estimates that industrial robots increase productivity and wages, but decrease low-skill employment.

“If 100 people lose their jobs at $12 an hour, you now have a new person employed at $1 million a year at [$500] an hour…I mean, oh my god,” Sargent said. “It's like you have a lot of people in Pittsburgh making a lot of money at the expense of a lot of people not having jobs across the U.S. and across the world.”

While Pittsburgh’s economy may be booming with tech giants like Uber and Google, people with near-minimum wage jobs are suffering. To see who may stand to be most affected by automation in the Pittsburgh area, he said to look at unemployment rates and workforce participation by neighborhood, with poorer areas like Homewood ranking near the top. Automation may be taking jobs that otherwise would have been available to those looking for work.

“No one's being told that they're fired because the robot came,” he said. “It's been a silent problem for a long time, and there are people today who have problems because of it.”

Whether or not robots will send us to some “WALL-E”-style dystopia where we rarely move from hovering armchairs, the Advanced Robotics for Manufacturing (ARM) Institute aims to prepare us for whatever automation might bring.

Started in January with an $80 million grant from the U.S. Department of Defense and $173 million from partner organizations, ARM plans to empower domestic workers to compete with foreign low-wage laborers. The institute, which was founded by CMU, hopes to achieve this by developing better, low-cost robots, as well as making educational programs that teach new skills to the workforce, focusing on industrial sectors like the electronics and textiles industries. “I think there are people out there who think that you ... get out of high school, you get a job, and you're there and people take care of you,” Douglass said. “Well, that doesn't happen anymore. Jobs are different — they're evolving constantly.”

As far as Pittsburgh's employment rate, Douglass referenced the growth of the city’s creative-class jobs and industries, like engineering and health care, and how it opens additional opportunities for low-skill work.

According to the Bureau of Labor Statistics, from March 2007 to March 2017, the number of workers in education and healthcare services in the Pittsburgh region increased from 226,500 to 249,000. Douglass often looks to history when talking about how automation affects our labor force, how innovation drives the economy and creates new work — only it’s happening much faster this time around.

“All jobs will continue to evolve at probably an increasing rate,” he said. “And so it becomes imperative that the workforce and the educational system identify that and continue to keep their eyes open, look for training, retraining, new training opportunities, keep your eyes and ears open, and accept the fact—and I think most people do—that things are changing.”

Brady Langmann is an editorial assistant at Esquire in New York City. He recently graduated from the University of Pittsburgh. He can be reached at langmannb@gmail.com.