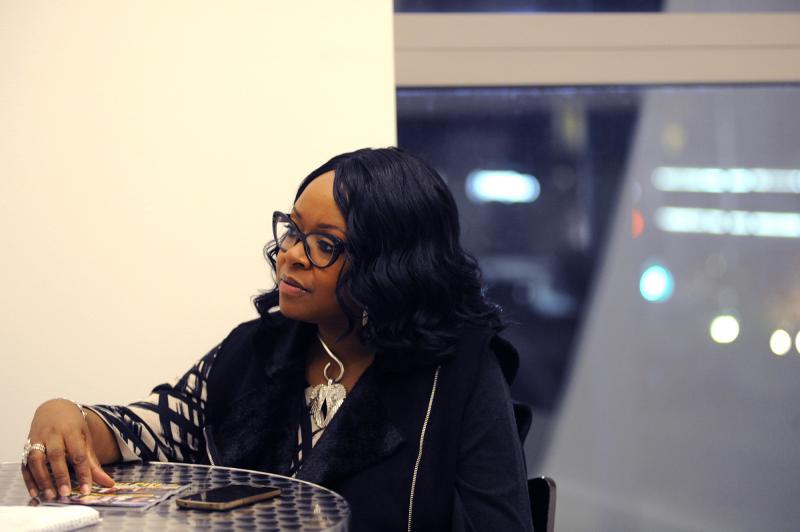 Donna Baxter Porcher, the founder of SoulPitt.com, attended the "Stand Up, Stand Out" event at the August Wilson Center.

As an undergrad at Pitt, Donna Baxter Porcher started a website for fun. At the time, she had no idea her hobby would eventually blossom into a career with a six-figure salary.

“I started the site so I could show my friends what was going on on the soul side of Pittsburgh,” she says. “They wanted to know where the barbershops were, where the churches were, where to get their hair done, stuff like that.” She’s quick to add that, “Soul is not just a color. Everybody likes jazz, and soul food, and knowing about different things to do in the community.’

The website, TheSoulPitt.com, has since expanded into a multi-channel media company that distributes a free, quarterly print magazine focused on the arts, events and stories most relevant to Pittsburgh’s minority communities. Baxter Porcher acts as CEO, technical coordinator and webmaster.

On Tuesday night, a town hall event, dubbed “Stand Up, Stand Out,” drew about 100 active and aspiring entrepreneurs, including Baxter Porcher, to the August Wilson Center for a discussion about how women and people of color can succeed in the technology sector.

The event featured a conversation with Angela Benton, the founder and CEO of NewME Accelerator, a Silicon Valley company that provides support for minority and women entrepreneurs in tech. Benton discussed entrepreneurial fundraising strategies and shared stories from her own impressive journey as a single mom who’s been working since she was 15.

By just about any metric, Benton has officially made it: Her accelerator has helped hundreds of businesses raise more than $20 million in venture capital funding, and she’s been included on Goldman Sachs' list of 100 Most Intriguing Entrepreneurs, Fast Company's Most Influential Women in Technology, and Business Insiders' 25 Most Influential African-Americans in Technology.

Despite success stories like Baxter Porcher’s and Benton’s, it’s no secret that the tech sector still has a diversity problem.

Tech workers are still overwhelmingly white or Asian and male. A 2014 USA Today report found that "top universities turn out black and Hispanic computer science and computer engineering graduates at twice the rate the leading technology companies hire them.” And while major companies like Google and Facebook are actively working to improve diversity among their staff, both continue to report that they have a long way to go.

“When it comes to big technology corporations actually diversifying who works there, I think the approach Silicon Valley tends to take is myopic,” Benton says. “To solve the issue, they’re going to have to be a little bit more deliberate about who they want to hire. These are innovative companies, so they're going to have to be innovative to change this because clearly what they've been doing hasn't been working.”When it comes to Pittsburgh, while we know that our overall workforce – and the city for that matter – is starkly lacking in diversity, there’s little publicly available data on diversity in our ever-expanding tech sector. Josh Lucas, the founder of Work Hard Pittsburgh, a cooperative business incubator that supports Pittsburgh entrepreneurs, is hoping to change that.

“We’re trying to raise money for what we’re calling the ‘Pittsburgh Technology Gap Assessment,’” Lucas says. In addition to answering questions about demographics and diversity, Lucas says the study would also illuminate gaps between the job market and Pittsburgh’s talent pool, “to make sure the skills we’re instilling in people in educational organizations are actually the skills that are needed in the job market.”

Lucas says the data is critical because “there’s a lot of lip service paid to this issue, but no one actually takes the time to quantify what’s going on so real solutions can be introduced to solve the problems.” He’s hopeful that they’re on track to secure funding and make the data publicly available by spring.

Shawntae Spencer, a Pittsburgh native who spent eight years playing cornerback for the San Francisco 49ers, attended yesterday’s event. He’s a longtime friend of Benton’s, and since leaving the NFL in 2012, he has built an impressive portfolio as a private tech industry investor in Silicon Valley.

“I knew that I really wanted to focus on women and minority entrepreneurs because they were underserved,” Spencer says. “That’s what I built my portfolio on, and I’ve done very well with it.”

Spencer, who lives in Pittsburgh, says the city is “very far behind” when it comes to diversity. “I think that's the only thing that's really keeping Pittsburgh from exploding in the tech community.”

He adds that there’s no lack of talent here and advises Pittsburgh investors to take notice. “It's just a matter of giving these young women and minorities coming out of our universities the resources and the capital to develop their products,” he says. “Because if they can’t get it done here in Pittsburgh, they’ll go elsewhere and get it done.”