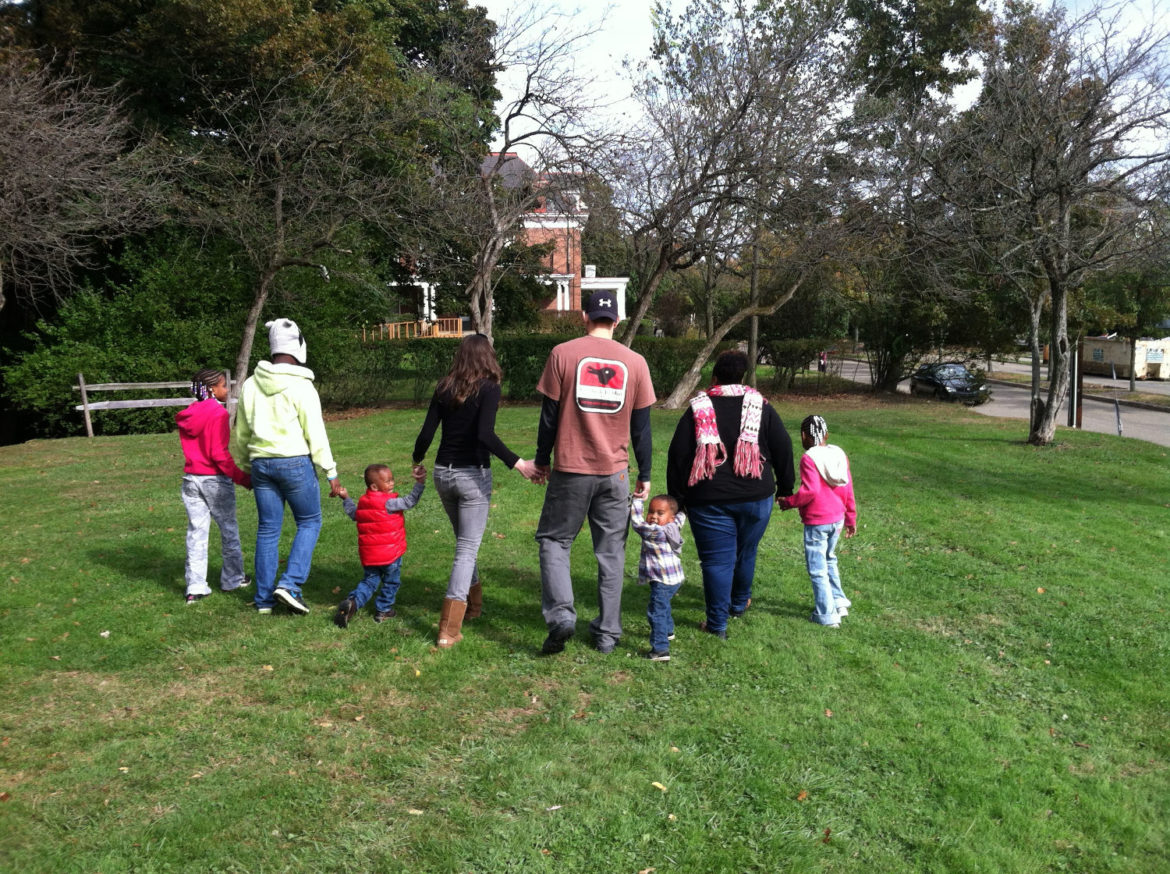 In 2011, the year Christi and John Rooke adopted two of their five children, the Pittsburgh couple filed for an adoption tax credit — $13,000 for each daughter who joined their family.

The couple used the $26,000 combined credit to pay off their debt, and to buy a 12-seat passenger van and a pop-up camper to take their family on cross-country adventures.

Though it may sound like a windfall, Christi Rooke said the family is strapped much of the time. She and her husband work flexible jobs so someone is always home with the children, who have an array of needs resulting from foster care and the circumstances that got them there, she said. All five of the children, ages 3 to 14, were adopted through Pennsylvania’s child welfare system.

“The adoption tax credit didn’t necessarily help us in the process to actually adopt, but rather it has helped us with all the expenses after the adoption,” said Christi Rooke, a nurse. “We were able to purchase items and experiences that we otherwise would not have been able to afford.”

Each year, as the tax filing deadline approaches, thousands of families who adopted the year before collect receipts and tally adoption-related expenses for the credit. For the 2014 tax year, taxpayers could apply for up to $13,190.

Many families aren't eligible for the total allowable adoption tax credit the first year they file because their tax liability is not high enough. They have five more years to recoup expenses.

The credit was 'refundable' in 2010 and 2011, which meant families could get the full credit even if they didn't owe that much in taxes. In 2010, families who adopted as far back as 2005 were encouraged to file for the rest of their credit.

*This data compiles original filings and does not include amended returns.

The adoption tax credit was designed to help families offset adoption costs, which typically range from $10,000 to $30,000. Though it costs far less to adopt through the child welfare system, as the Rookes did, these families often face far greater post-adoption expenses.

The Rookes got the adoption tax credit in one of only two years it was available for low-income families. Typically, to qualify for a credit, taxpayers have to make enough for it to count against what they owe in taxes, and that’s how it is now.

On April 15, U.S. Sens. Bob Casey (D-Pa.) and Roy Blunt (R-Mo.) introduced legislation to make the credit refundable again. In a statement, both senators said many families who are adopting don’t earn enough to claim the credit at all and cited federal data that showed almost half of families adopting from foster care are at or below 200 percent of the federal poverty level. Casey introduced similar legislation in 2013.

Bill Blacquiere, president and chief executive of Bethany Christian Services, which has an office in Wexford, Pa., said the adoption tax credit is a "tremendous assistance" for families who want to adopt but can't afford to.

“There are many families who adopt children with special needs, older children [and] sibling groups," he said. “They just don’t have the funds.”

In the U.S., nearly 101,700 children in foster care are eligible for adoption, according to the Congressional Coalition on Adoption Institute, a nonprofit organization that connects policymakers with families who have adopted.

The adoption tax credit was first passed in 1996 as a provision to the Small Business Job Protection Act. It was made permanent in 2013 through the American Taxpayer Relief Act.

Parents who adopt a child with special needs in the U.S. can claim the credit even if they have few  or no adoption-related expenses. The credit covers expenses like agency and attorney fees, visas and travel, including meals and lodging. If they don’t have enough tax liability in the first year that they can apply for the credit, parents can carry it over for up to five years.

Here’s how it works: If a single parent or family has $21,000 in adoption expenses, they could apply for up to $13,190 in a credit for the 2014 tax year. That means if they have paid at least $13,190 in federal income taxes (their tax liability), they will get that money refunded. If they did not pay that much, they can apply for a credit against what they did pay and carry over the remainder of the credit for future years.

For families budgeting for adoption, that means the actual cost that they pay, if the adoption costs $21,000, will be about $7,800.

Families still have to come up with the total costs of adoption first because they can’t claim the credit until the adoption is final. So, for example, if a couple traveled to Ukraine to adopt in 2014, but the adoption wasn’t finalized until 2015, they couldn’t apply for the credit until they file their 2015 taxes. Many families, knowing they will be able to recoup a portion of the expenses eventually, borrow money from family and friends or take out a loan.

Not all families need the credit to afford adoption. And the credit phases out or is eliminated if a family’s income is too high.

For others, the credit makes it possible to adopt, particularly from overseas. Costs to adopt internationally can reach $50,000. In 2014, U.S. families adopted 6,441 children internationally, according to a U.S. Department of State report. Most of the children came from China, Ethiopia, Ukraine, Haiti and South Korea.

Sarah Beck and her husband, Kevin Fitzpatrick, of Philadelphia, have two children adopted from South Korea. They filed papers in July 2008, and their daughter, Kaley, who was 9 months old at the time, arrived at the John F. Kennedy International Airport almost five months later. The adoption cost $32,000, plus U.S. fees, and the family received a $10,000 tax credit, Beck said.

They wanted to wait a few years before adopting again, to space out the ages of their children and to save for the next adoption, said Beck who works six different jobs, including midwife and yoga instructor.

“We began to hear rumors that Korea was going to close or, at the very least, dramatically slow their international adoption program,” she said. “That motivated us to adopt sooner than we first expected.”

Their son, Caius, arrived at Kennedy Airport in September 2011. His adoption cost $35,000. The couple used the refund from their first adoption to help pay for the second.

Last summer, they got word that a little girl who turned 1 in July was available for adoption. The couple had not expected to adopt again, and they had used the second adoption credit to send Fitzpatrick to graduate school.

The couple was torn. They wanted to adopt this little girl, but had no money. This time, the adoption will cost about $48,000. The couple started a crowdfunding campaign and raised more than $16,000. They got another $7,000 from family members.

“Everyone has been so generous,” Beck said. “I have also worked every job I could to raise money.”

The couple expects their daughter to arrive between this summer and December 2016.

In 2011, about 46,400 taxpayers filed returns requesting the adoption tax credit, according to data from the North American Council on Adoptable Children.

Many families who do not qualify currently because their tax liability is too low have gone ahead and filed for the credit in the hopes that Congress will restore the refundable credit.

Advocates said the refundable credit was particularly important for low-income families, many who adopt through the child welfare system and who adopt sibling groups.

“When families know that there is refund or the credit it helps them to have more options,” said JoAnn A. White, director of Family Hope Connection, a Pittsburgh-based adoption agency. “Then they don’t look at adoption on the basis of what they can afford.”

Families who adopt through the child welfare system may not incur many costs, White said. But the refund may allow them to look at larger sibling groups or children with special needs.

Christi and John Rooke initially had planned on having biological children and later adopting. But after working as house parents at George Junior Republic, a Grove City, Pa., group home for juvenile delinquent boys, they decided to focus exclusively on creating their family through adoption.

“It did not sit right with us that for every biological kid we would bring into this world that would be one more child that we could not adopt,” Christi Rooke, 35, said.

Because the adoption tax credit is no longer refundable, the family cannot apply for a refund to help with the costs of raising their youngest children, who joined the family in 2012 and were adopted in 2014.

But their finances have improved since John Rooke, 34, was a high school English teacher, a job he quit to homeschool his daughters. The older children are back in school, and he now runs a realty company with his brother, fixing up properties and renting them out.

“At the end of the day, without the tax-credit refund, our time would be spent on having to make that money working extra jobs or overtime,” Christi Rooke said. “And in light of the kids we have adopted and their emotional needs, that sort of gift and freedom is priceless.”

Jackie Spinner was a staff writer for the Washington Post for 14 years. She is the author of “Tell Them I Didn't Cry: A Young Journalist's Story of Joy, Loss, and Survival in Iraq.” She is currently a journalism professor at Columbia College Chicago and has two sons adopted from Morocco. You can reach her at jackiespinner@mac.com.