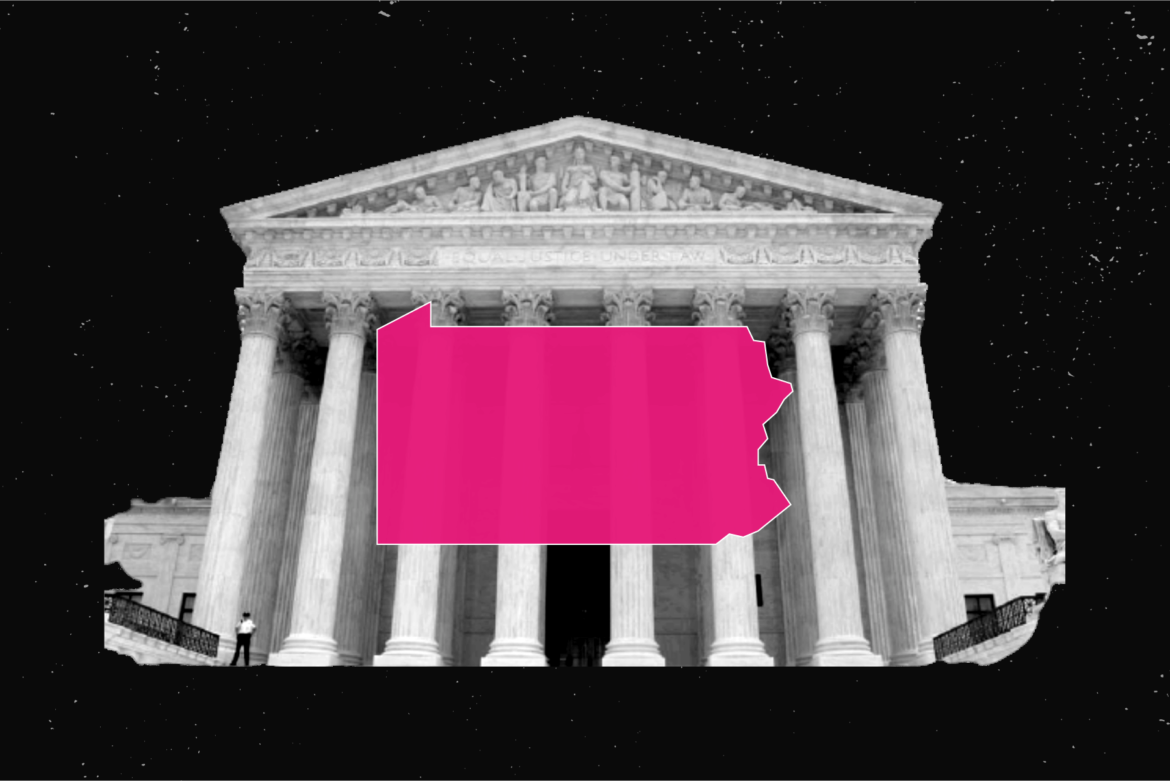 The confirmation of Justice Amy Coney Barrett to the U.S. Supreme Court a week before the 2020 election set off waves of alarm for abortion rights advocates — and celebration for abortion opponents. With a firm conservative majority, Barrett’s confirmation could mean the weakening or even overturn of Roe v. Wade, a move that would put more power in the hands of states that have sought to tighten abortion restrictions.

Conservative states from Mississippi to North Dakota have already passed laws tightening the rules for abortion providers, which has caused some states to lose nearly all of their providers. West Virginia and Ohio are increasingly dominated by conservative state governments that support heartbeat bills — legislation that prevents a woman from having an abortion after detection of a fetal heartbeat. As a result, Pittsburgh abortion providers think that they could soon see an influx of women searching for abortions they can’t get close to home.

“We’re constantly talking about surges,” said Ryah Issa, the director of nursing at the Allegheny Reproductive Health Center in Pittsburgh. “We have plans set in place so that if, all of a sudden, we start doubling our intake, I know what extra supplies to get and what extra staff we need.”

Abortion opponents in Pittsburgh, meanwhile, are already looking ahead to 2022 when they hope they can flip the governor’s seat and pave the way for increasingly stringent abortion laws. Currently the state is split between a Republican held legislature and a Democratic governor.

“It’s going to be very difficult to get anything done as long as Governor Wolf is in office,” said Isaac Bruce, the vice president for People Concerned for the Unborn Child, a nonprofit anti-abortion advocacy and education group based in Dormont. “Ideally, a very staunch pro-life governor would be best.”

A hub for abortion services

Pittsburgh has become a hub for abortion care, as clinics in more rural areas of the state have shuttered and restrictions in neighboring states have increased. Planned Parenthood of Western Pennsylvania operates one of only two freestanding abortion clinics in Allegheny County.

And they are one of only two clinics for at least a hundred miles, often receiving patients from Northwestern Pennsylvania, Ohio, and West Virginia. Around 10% to 15% of patients come from Ohio or West Virginia, said Sara Dixon, a public relations manager for Planned Parenthood of Western Pennsylvania. She expects that number to increase should Roe v. Wade be overturned and further restrictions be enacted in nearby states.

The Pennsylvania state health insurance exchange set up by the Affordable Care Act will only cover abortion in the instances of rape, incest, or threat of life to the mother. The same is true of health insurance for any public employees in Pennsylvania. Private insurance plans however can still cover abortion care in the state. Because of gaps in insurance coverage, Dixon says 91% of patients seen at Planned Parenthood of Western Pennsylvania pay out of pocket for abortion care. Regulations limiting coverage tend to disproportionately impact women of color or those with low income, who are more likely to be on Medicaid.

The recent recession has also exacerbated financial needs at the clinics. “The pandemic has been hard for everyone,” Dixon said, mentioning that the clinic has faced increased expenses in new cleaning procedures, social distancing policies, and updates to their HVAC systems. “But we have managed to stay open, and actually increase our services to include telehealth services.”

What do abortion opponents think?

But the confirmation of Barrett — a vocal supporter of abortion restrictions —  doesn’t yet feel like a full victory to local anti-abortion activists like Bruce. “Her confirmation is absolutely a step in the right direction for the pro-life movement,” said Bruce, emphasizing what he views as a realistic chance of overturning Roe v. Wade with her giving the court a strong conservative majority. The Pennsylvania Pro-Life Federation echoed his sentiments, praising the addition of Barrett to the court.

Bruce knows efforts to fully ban abortion don’t end with an overturn of Roe v. Wade, however. “We know when it goes to the states, it’s going to be quite the fight, and we know that Pennsylvania will be an interesting battleground,” he said.

During confirmation hearings, Barrett largely dodged questions around Roe v. Wade, declining to “pre-commit” to any questions about future challenges. Nonetheless, past writings and speeches from her on the matter have groups like Bruce’s hopeful for future anti-abortion litigation.

The incoming Biden-Harris administration sours the victory of Barrett’s confirmation for Bruce, too. “A Vice President Harris is probably the most cause for worry that I’ve seen in a long time,” he said. NARAL Pro-Choice America, one of the largest abortion rights advocacy groups in the country, gave Harris’ voting record a perfect score on abortion rights support for the past three years. President-elect Joe Biden’s score from his time in the Senate was comparatively less favorable. But Bruce worries that Biden will lean on his vice president for advice on abortion-related matters “and take orders from her on how to make life horrible for pro-lifers.”

Despite these concerns, Bruce still has confidence in his movement’s political strategies in Pennsylvania. Before the pandemic limited in-person contact, his group had planned to help organize a March for Life in Harrisburg to localize the annual national march. He has hope, too, in the movement’s ability to help elect anti-abortion lawmakers, like those in the Pennsylvania legislature's Republican majority.

Now, his focus is on electing a Republican governor in 2022.

Gov. Tom Wolf, who was elected to a second term in 2018, cannot seek reelection. Planned Parenthood spent $1.5 million on supporting his reelection that year, and will likely show similar support for the next Democratic candidate.

Issa, of Allegheny Reproductive Health Center, is more concerned about increased restrictions in Ohio and West Virginia. In 2019, Ohio state lawmakers passed a heartbeat bill — a law that makes abortion illegal once a fetal heartbeat can be detected—that was subsequently blocked by a federal judge. Two similar bills were introduced in West Virginia in 2019, though neither passed.

These growing threats to abortion access have Issa thinking about a potential influx of patients to the center. Currently, about 25% of her center’s patients come from out-of-state patients, and the center expects that number to increase.

Even if similar threats to abortion access arise in Pennsylvania, Issa feels confident in the community of support across medical, midwife, and reproductive justice groups, in addition to average citizens who believe that abortion access is a basic right.

A 2019 survey from the Pew Research Center showed that 61% of Americans think abortion should be legal in all or most cases, while a 2014 study showed this number was significantly lower in Pennsylvania, at 51%. Bruce, of People Concerned for the Unborn Child, argues that a majority opinion shouldn’t discredit the minority one. “Whether something is in the minority or not does not negate its level of validity or truth,” Bruce said.

But Issa remains an optimist about Roe v. Wade, believing that groups like the American Civil Liberties Union will prevent it from being fully overturned by fighting in court. “There are too many people in this country that have abortions to overturn it," she said. "It just doesn't make sense."

Her center is also feeling some economic hardship from the COVID-19 pandemic. Though consistent community-based funding has remained intact for the center, Issa wonders whether more permanent economic damage from the pandemic might start to dry some of that up as fewer people have disposable income. The center’s expenses have increased during the pandemic, too, with an increase in the normal cost of personal protective equipment.

La’Tasha D. Mayes, the president and CEO of New Voices for Reproductive Justice, acknowledges that the confirmation of Barrett puts new pressure on Roe v. Wade. But she also notes that many people are already living as if that decision had been overturned.

“We’re already post-Roe,” she said. “The truth is, access to healthcare has always been elusive and inaccessible for Black people in this country.”

Mayes says much of her work has always been about fundraising for abortion care for those who can’t afford it. The recent pandemic-related recession only exacerbates that. “Reproductive justice organizations stand in the gaps of creating connections to care,” she said, “whether that is working with abortion funds to help them raise money or blocking dangerous legislation at the state level.”

Instead of waiting to defend abortion access against new threats, Mayes is trying to expand access now. She says more Democratic politicians are increasing their support for abortion access, and she thinks they could  repeal the Hyde Amendment — a provision that prohibits the use of federal money to pay for abortion in most cases.

A victory for abortion rights advocates in a court case challenging a ban on Medicaid fund allocation for abortions in Pennsylvania — Allegheny Reproductive Health Center v. Pennsylvania Department of Human Services — could pave the way for action at the state level. The Pennsylvania Commonwealth Court held oral arguments in October about whether to allow Medicaid to cover abortion care.

“We know that because of disproportionate rates of Black folks relying on Medicaid for health insurance, this could change the game for the health of Black people across the state and in Pittsburgh,” Mayes said. A ruling in Allegheny Reproductive Health Center’s favor would open the way for some state funding for abortion care.

These efforts, paired with a focus on organizing for state and federal elections, are what Mayes hopes will create more opportunities for abortion access. After leading a robust voter engagement effort for the recent presidential election, her eyes are also on the governor’s race in 2022.

“I think there will be lots of effort put into the governor’s race on both sides,” she said. “When it comes to abortion access, it’s always about the states.”

Sophie Burkholder reported this story as a PublicSource editorial intern. She is a freelance reporter now and can be reached at sophieburkholder1@gmail.com.

This story was fact-checked by Amanda Su.