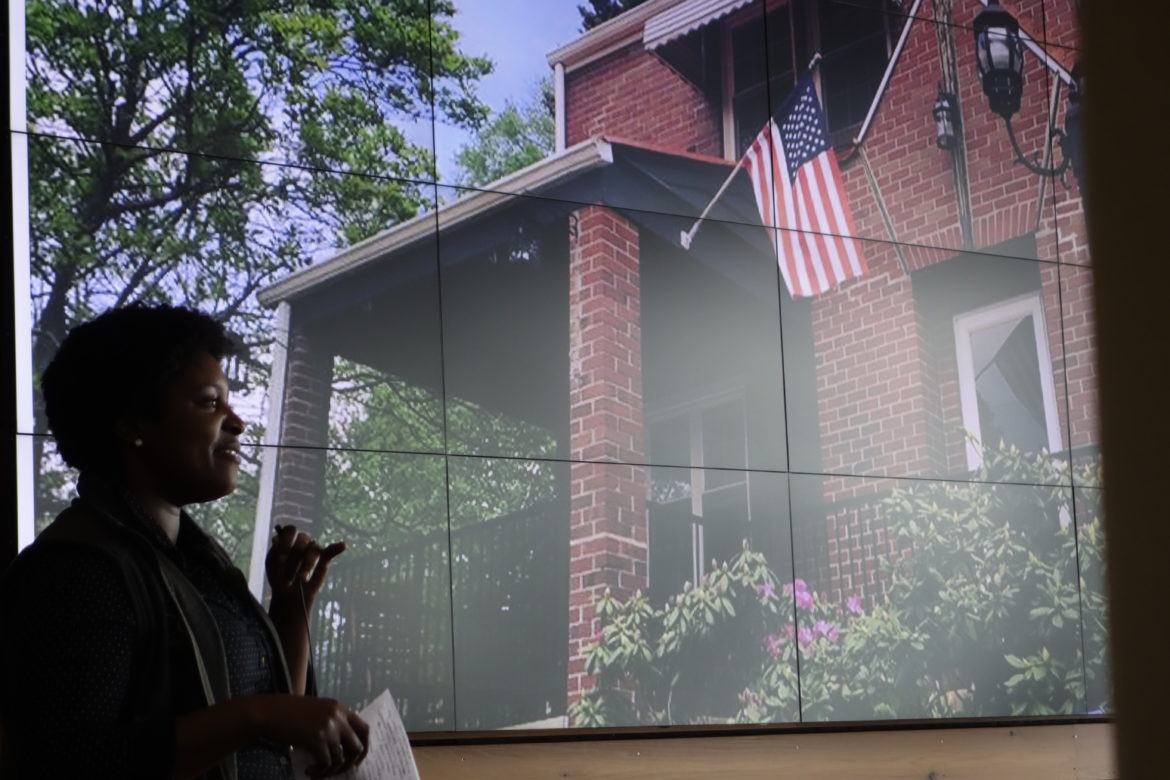 “The lesson I learned is you don’t have to go anywhere to travel,” said Ariam Ford, the keynote speaker for the third annual Seeds of Change sustainability conference. (Photo by Oliver Morrison/PublicSource)

At a youth sustainability conference on Monday, three students from an environmental club at Fox Chapel High School presented a behind-the-scenes look at how they and other students built a community garden.

Although the garden was less than a year old, it has already yielded impressive results: Beds of vegetables. Students who worked over the summer to earn volunteer hours. A plan to increase production that would allow the food to be integrated into the school.

“The students learn where their food comes from and that it takes a lot of effort to get that little cherry tomato on your plate,” Nathaniel Roe, one of the students, said.

The Fox Chapel students were three of more than 100 students of all ages, from public, private and charter schools, who traveled across the Pittsburgh region to Chatham University’s bucolic Eden Hall campus 20 miles north of the city. They were presenting sustainability projects they had implemented in their schools and communities for the third annual Seeds of Change: Igniting Student Action for Sustainable Communities Conference.

One group published an article about a new store selling produce in Rankin. Another group was trying to convince their school district to replace plastic cutlery with metal silverware.

Ariam Ford, a city planner who served as one of the judges of the students’ projects, could have pushed the students from Fox Chapel on specifics of their garden’s growth plan. But instead, she brought up a previous presentation by students at Pittsburgh’s Perry High School, another group that had presented an urban garden.

“There’s a dichotomy between the two garden experiences,” Ford said.

Perry’s students hadn’t yet been able to fully implement their garden. The Perry students had started their project with a focus on hunger in their school. The lunches were too small, said Chereigna Jones, one of the students, and many students didn’t have enough food at home.

The Perry students learned there is a link between not eating enough and aggression at school, Jones said; our bodies give off the same hormone, cortisol, when they are hungry as when they are preparing for ‘fight or flight.’

“That can lead to aggression. ‘Bro get off me, I don’t want to deal with this right now,’” Jones said. “It’s easier to focus when you have already eaten.”

So the Perry group focused first on partnering with a local food bank to bring food into the school.

“I love that you didn’t fall into this trap, which I call the peasantization of poverty: ‘Oh these people need to eat food. Let’s have them farm this urban piece of land while everyone else goes to Giant Eagle,’” Ford told the Perry students during their presentation. “The more practical thing is to partner with the food bank to get these people food.” 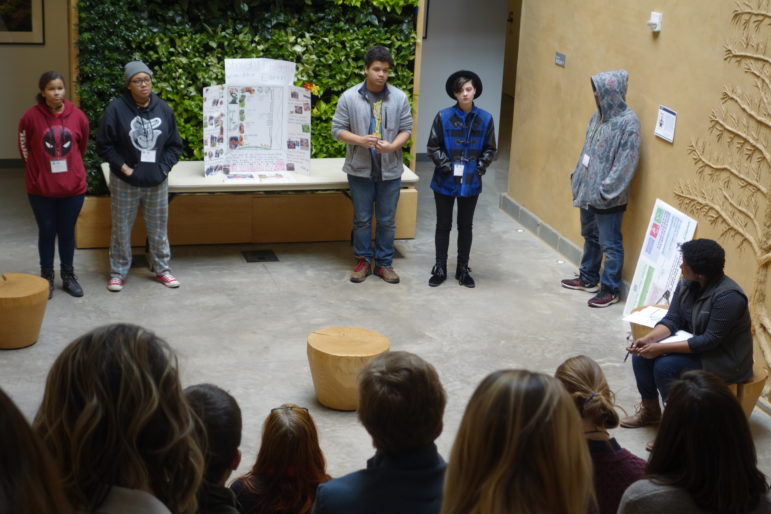 It’s easier to focus when you have already eaten," said Chereigna Jones (second from the left), a student at Pittsburgh's Perry High School. Her group won one of the three $300 prizes at the third annual Seeds of Change sustainability conference. (Photo by Oliver Morrison/PublicSource)

Ford gave the keynote speech for the conference about her journey to work in urban planning: She was raised in Washington D.C. by her mom. Her father was in prison. Sometimes she visited her friend’s house, where she observed two parents, a big house and a Nintendo GameCube; she wondered why her life didn’t look like that.

“So literally since that time I’ve been running, around the world” trying to make that dream her reality, she told the students.

She earned a degree in history from the University of Virginia and then a master’s degree in city planning from Boston University.

She moved to Pittsburgh in 2015 and began to travel the world to work with military bases on the long-term planning for how to use their land. In 2017, she began to work with Grounded, a community development nonprofit, where she gathered data about vacant land from people in low-income communities — “so development doesn’t overcome them and they don’t become victims of progress.”

She learned that many people have different, competing visions for what their ideal life and ideal community should look like. It’s her job and the students’ jobs, she said, to try to stitch together everyone’s visions into a coherent whole.

“Place-making is hard,” she told the students. “What’s harder is creating spaces that are for everyone.” 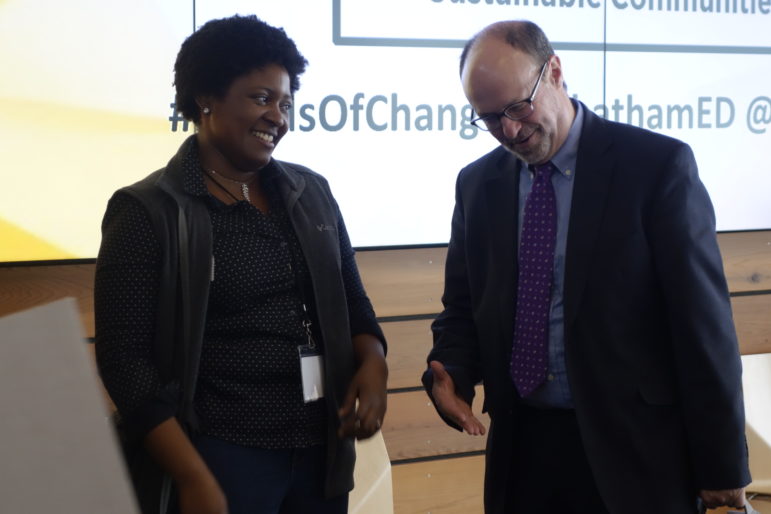 Ariam Ford (left) talks with David Finegold, the president of Chatham University, after her keynote address at the third annual Seeds of Change sustainability conference. (Photo by Oliver Morrison/PublicSource)

So the feedback she gave to the students from Fox Chapel wasn’t just about how to make a more environmentally friendly, economically efficient garden, it was about how they could think about stitching their vision together with the vision of the students from Perry High School.

The Perry High School team was one of the three groups awarded the top prize and $300 to help fund their projects. A group from City Charter High School also won the funds, and Operation Better Block won for its vacant lot maintenance program in Homewood. The students were judged on their ability to incorporate the United Nations Sustainable Development Goals, including environmental, economic and equity concerns.

Through her travels across the country and world, Ford said she learned she didn’t have to keep traveling to find that perfect vision of a home.

“The lesson I learned is you don’t have to go anywhere to travel,” she said, with a picture of her current home in Pittsburgh projected behind her. “It’s daunting, but the best thing you can do is to start at home.”