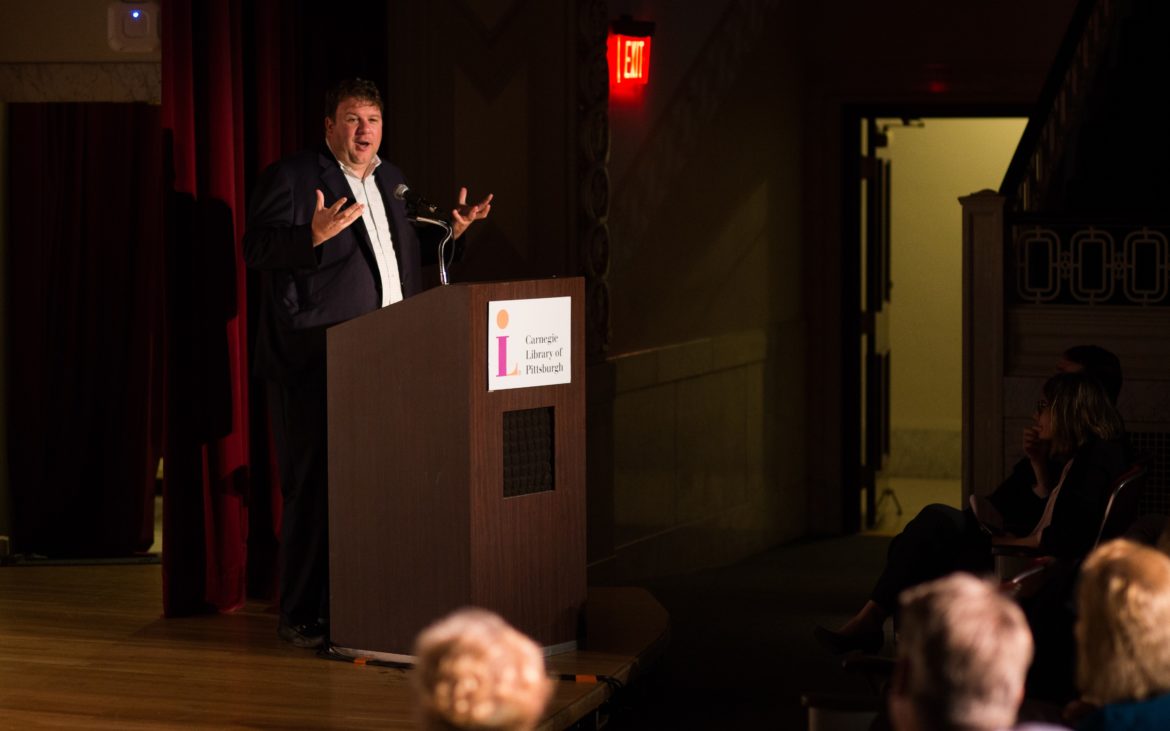 As Hillary Clinton waited backstage on Nov. 8, 2016, she looked over at Bill, who was slipping on his suit jacket, and smiled.

Her campaign staff clinked their champagne glasses, as she walked to the podium, to signal that, come January, the glass ceiling that held back women had been shattered.

Some version of that story with a happy ending for Hillary Clinton’s supporters is what political journalists Jonathan Allen and Amie Parnes were preparing to turn into a book, Allen told an audience of more than 100 attendees at the Carnegie Library Lecture Hall on Tuesday. Instead, they wrote “Shattered: Inside Hillary’s doomed campaign.”

In the book, Allen and Parnes outline three major mistakes Clinton made that derailed her campaign. But the authors were just like a lot of people in America and across the world shocked when Trump won. Albeit the ending was not the one they had planned for, the details they gathered were “foreshadowing” of the ultimate result and filled with sordid campaign infighting. What before they thought would have to turn into a story of how Clinton overcame so many setbacks, now became the story of how those setbacks were symptoms of her larger failures.

They published the book in April, one of the first behind-the-scenes looks at what happened. “We did not have to go back and tear things up,” Allen said. "We simply didn’t have to go back. There were a few sentences that changed."

After Clinton lost, more details emerged as many more Clinton campaign staff members were willing to share their stories, adding to the stories they already had.

The first was an inability to make the campaign about anything but herself. The phrase that really stuck, “I’m with Her,” was about Clinton, not about voters. Even in her recently published memoir titled “What Happened,” Allen said, Hillary's real reason for running was that she thought she would make a good president.

Voters wanted to know what she could do for them, he said. They wanted a message, like with Bernie Sanders who made his campaign about redistribution of wealth, helping people who were struggling to pay for college and fighting back against the corporate elite. Or Trump who made his campaign about “America First”—build a wall, block foreign goods, get out of foreign treaties, Allen said. Because many Trump supporters heard a message that was about them, it allowed them to forgive him for upending norms, like not releasing his tax returns.

The second reason Clinton failed, according to Allen, was because of mistakes prior to the campaign that haunted her: the private email server she used for official government business and her decision to take hefty speaking fees from large banks and then never release those speeches. These decisions followed her throughout the campaign and allowed both Trump and Sanders to define her as dishonest and corrupt, Allen said.

Her third major failure was an overemphasis on data over gut instinct and traditional political strategies, like knocking on doors. Instead of trying to persuade undecided voters, like Bill Clinton wanted, the polling data told the campaign to focus on rallying the base in Democratic strongholds.

Internal campaign surveys, for example, showed the less frequently Clinton showed up the more people actually liked her, he said. So the campaign kept her away on purpose. The reason she didn’t go to Wisconsin or show up in Michigan until the very end wasn’t just a lack of polling on how close the race was. It was a calculated decision based on bad data, Allen said. Instead of trying to change voters underlying opinions of her, she tried to circumvent them.

Sexism played a role in the campaign, Allen said, “but it’s hard to put a number on it.” Women are punished more than men for appearing dishonest, he said, and women like Clinton have suffered for challenging the status quo. But President Barack Obama’s victory showed that a more skilled candidate could have overcome bias, he said.

“Ultimately, as a candidate, your job is to get people to vote for you,” Allen said. “And if you go back to sexism as a candidate to say that is why I lost you, are kind of blaming the electorate instead of finding a way to connect with the electorate.” What was so shocking in this election wasn’t that Clinton could lose. As Allen said, her political weaknesses were apparent during her more than 25 years in public life. What was shocking, he continued, was that she lost to such an unconventional candidate running an unprecedented campaign.

Clinton’s overreliance on data, which Allen pointed out, wasn’t shocking in the way it was for Trump to ask his crowd to rough up protesters. The lack of an external focus to Clinton’s message may have hurt, but it was pedestrian compared to the dozen women who claimed they had been sexually harassed by Trump. While Allen catalogued the deliberations behind Clinton’s slight change in her minimum-wage policy, Trump’s crowds were chanting “Lock her up!”

“I think the Democrats didn’t pay enough attention to the desire to get rid of the institutions Hillary Clinton so thoroughly believed in,” Allen said.