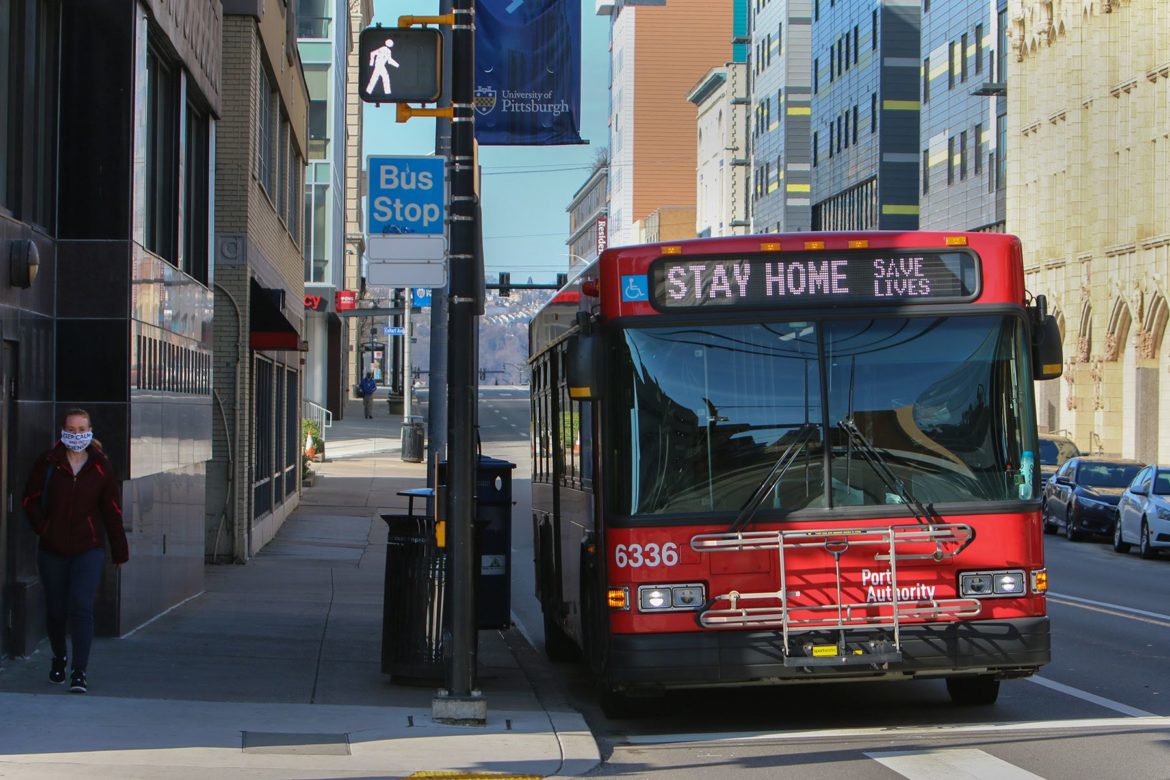 On Forbes Avenue in Oakland, a person wearing a face mask exits a Port Authority bus adorned with the message 'Stay Home, Save Lives'. (Photo by Kimberly Rowen/PublicSource)

As the COVID-19 pandemic has eviscerated transit ridership around the country, it’s left many concerned about the financial health of transit agencies. The Port Authority of Allegheny County says it has lost 75% to 80% of its ridership. Though service is beginning to return to normal levels as the county begins to reopen its businesses, the Port Authority is also concerned about what the future holds.

“We don’t necessarily anticipate our ridership to bounce back just because we go to yellow,” said Port Authority spokesman Adam Brandolph. “This is very likely going to be a multi-month, if not multi-year, rebound for public transit around the country."

Port Authority anticipates that federal funding will provide substantial relief, but the pandemic has left the agency with the difficult challenge of rebuilding a depended-upon service after losses of tens of million of dollars amid the possibility that many pre-pandemic riders won’t return.

To mitigate physical contact during boarding, Port Authority moved to a virtually fare-free model during the pandemic. Fare collection, which resumes June 8, and advertising revenue typically amount to about $6 to $8 million a month. Meanwhile, the Port Authority has been spending an additional $1 million a month in cleaning costs, Brandolph said.

The transit agency is estimating a loss of $30 million due to the pandemic in lost fare collection and increased cleaning costs. The authority expects that emergency federal funding will offset the gap in the short term. Port Authority believes ridership could return to about 50% of its normal numbers in a few months, though the level of uncertainty at the moment means this is simply an educated guess, according to Brandolph.

During the pandemic, Port Authority drastically reduced its service. It’s also limited capacity on buses to 10 riders on a 35-foot bus, 15 on a 40-foot bus and 25 on a 60-foot bus or light-rail car. However, on May 18, Port Authority restored most of its routes to regular service, with 32 still reduced. Vehicles will still follow the same capacity restrictions and continue requiring all riders to wear masks.

“The Port Authority has been, frankly, very responsive to transit worker needs and transit rider needs,” Wiens said. “They’ve implemented a lot of the best practices, including rear-door boarding and … fareless transit, right now, which is great.”

Because of the stark decrease in vehicle capacity, Wiens said that the most essential routes may need even more frequent service than usual, while other routes may call for less frequency than usual.

“The routes that are currently seeing robust ridership will only see that ridership grow,” Wiens said. “And it’s going to be, we think, along the lines of what has been happening up until now… anybody who is currently transit-dependent will continue to be so, but now with more destinations available for them to go, and anybody who has had other options will continue to take those alternative options.”

PPT has been advocating for the Port Authority to receive more government funding, which Wiens said is helpful but insufficient.

“This is very likely going to be a multi-month, if not multi-year, rebound for public transit around the country.”

The federal Coronavirus Aid, Relief and Economic Security [CARES] Act paid out $25 billion to transit agencies across the country. Port Authority has been told it’s eligible for about $142 million, which the authority can use to soften the blow of revenue loss. The authority is still in the process of completing paperwork for the federal government showing how it plans to allocate the federal money and is not sure yet when funds will arrive.

“We are taking a look at it very closely. We are concerned,” Brandolph said of the agency’s funding challenges. Right now, he added, there is not “any sense of panic at this point.”

Diminished ridership numbers make the argument for reducing or eliminating fares in the long term and instead increasing public funding, according to Stan Caldwell, executive director of Carnegie Mellon University’s Traffic21 institute. Caldwell said he believes that ridership will initially remain low even when the virus calms because many will choose other transportation options out of concern for their health.

“The natural reaction would be to either increase the cost or decrease the service,” Caldwell said. “And by doing those, you’re going to go back to the shrinking system that we had years ago where then that was creating a downward spiral where you’re making transit less attractive to people to use.” 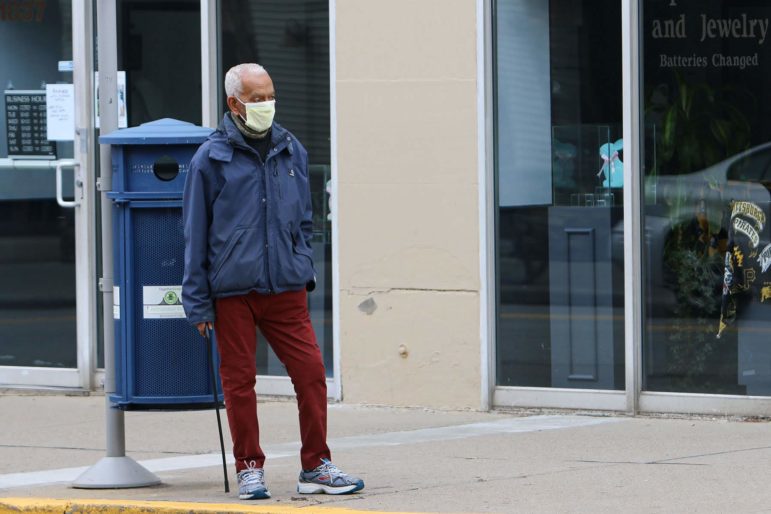 A man waits for the bus along Murray Avenue in Squirrel Hill on March 27. (Photo by Kimberly Rowen/PublicSource)

Caldwell posits that transit agencies like the Port Authority should still seek state and federal funding but that transit agencies thrive whenever there is significant local funding, through mechanisms such as a sales tax. According to the Port Authority’s most recent budget, the state provided about $242 million  in their 2019 fiscal year and the agency anticipated $275 million in state funding for 2020. Caldwell noted that public transit in Salt Lake City has found success  with local sales taxes, which funds about 69% of its operations.

While Port Authority works on its funding challenges, the agency plans to continue to sanitize vehicles and maintain hand sanitizer dispensers throughout its system.

“We acknowledge, and we’re very mindful, that our riders may be hesitant to ride public transit again, at least in the relative short term,” Brandolph said. “And we want to let our riders know that we’re doing everything we can to protect them, to protect our employees.”

While there isn’t panic within the agency, it’s become clear to the Port Authority that a return to normal isn’t coming soon.

“The road back to 100%, back to March 1 or some time in February, it’s gonna be a long road ahead,” Brandolph said.