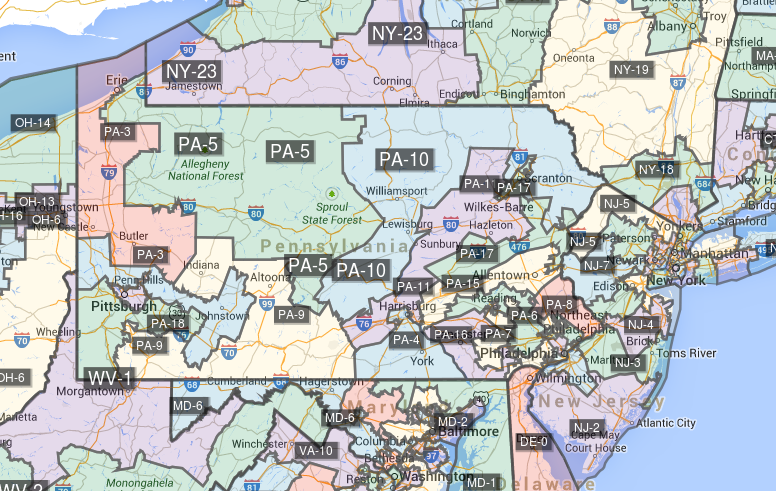 Congressional districts in Pennsylvania - and many other states - have grown less compact during the past few redistricting cycles. Pennsylvania’s 7th Congressional District has gone from a compact, rhombus-shaped district to a sprawling web of bizarre protuberances, as seen in this Washington Post graphic.

For the past three weeks, Christopher Ingraham at the Post has written a series of stories on the results and effects of 60 years of gerrymandering -- changing the boundaries of a congressional district to gain a political advantage.

The Legislative Reapportionment Commission draws the districts in Pennsylvania, but other states have created independent commissions to take the redistricting process out of the hands of politicians. Ingraham writes that Alan Lowenthal, now a Democratic member of Congress, was behind the push in California to start an independent redistricting commission.

An excerpt from the article:

In 2003 Lowenthal, along with a group of other assembly Democrats and Republicans, first introduced legislation to create an independent redistricting commission. "Nobody wanted to support it," Lowenthal said. "We couldn't even get a second in committee."

After a long uphill slog through the legislative process, a version of the bill passed in 2010, seven years later. Two factors were key: growing popular pressure, and the support of then-governor Arnold Schwarzenegger.

Another option is to take the redistricting process completely out of human hands. Ingraham writes about an algorithm created by Massachusetts software engineer Brian Olson that sets up  “optimally compact equal-population congressional districts in each state.”

The first two examples in the article are Pennsylvania and Maryland, which look drastically different under Olson’s model.

Ingraham acknowledges creating districts based solely on compactness may conflict with the Voting Rights Act, but concludes the algorithm is worth considering.