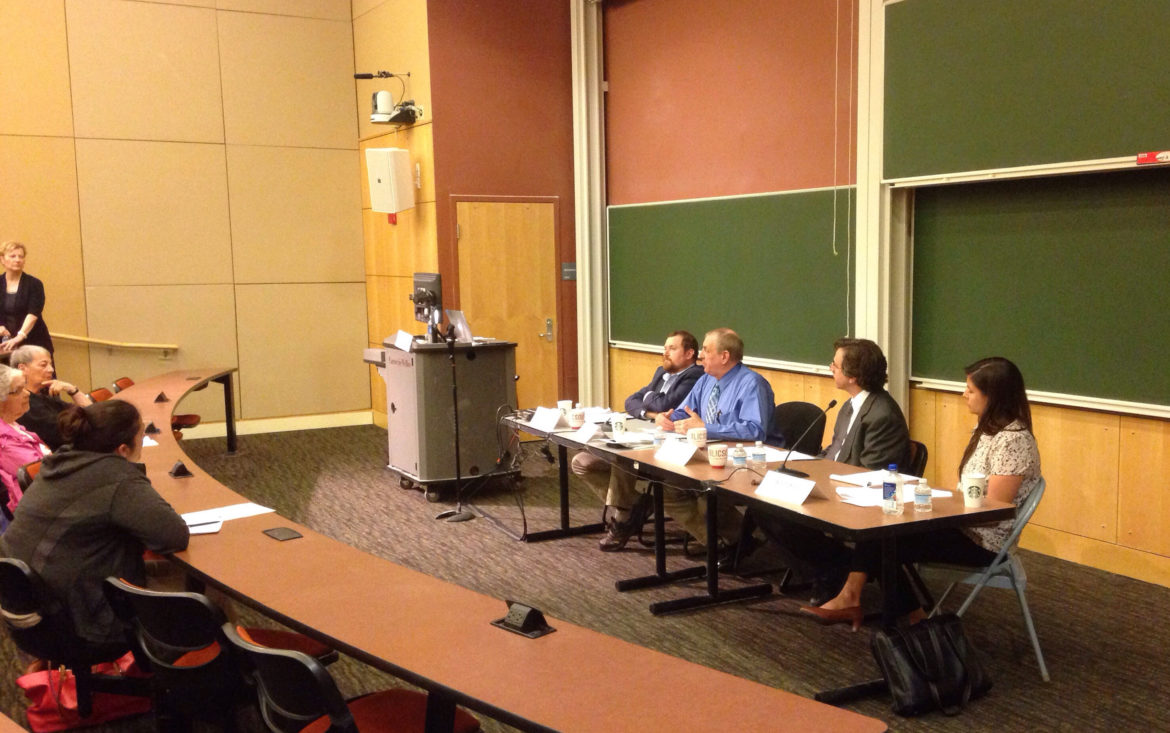 You know you’ve seen them.

PublicSource hosted a panel of experts Wednesday night at Carnegie Mellon University to talk about the risks of these crude oil trains in Pittsburgh. During the Q&A, engaged, and sometimes outraged, audience members expressed concerns about trains near their homes and children’s schools.

Ken Weir, a parent in the audience, pointed out PublicSource’s finding that there are dozens of K-12 schools in Pittsburgh within the half-mile evacuation zone of “these oil bombs.”

“Has the city alerted the schools? The parents?” Weir said. “If there is an evacuation, where is my child going? We don't have any of that information.”

His concerns were shared by two panelists, one who studies the oil train traffic in the city and another representing an environmental organization.

An emergency response official with the city of Pittsburgh, Ray DeMichiei, fielded the question by saying it’s always better to prepare for an incident rather than having to respond to it. He said that every school in the city is required to have an evacuation plan and the city has copies of those plans.

Notably absent were representatives from the two major railroads that move crude through the state, Norfolk Southern and CSX. PublicSource invited folks from the companies, but they declined to participate.

Along with trying to share some of the railroad officials’ perspectives, I highlighted some of the reporting I’ve done on this topic in the past year and a half. In March, PublicSource built a map showing that 1.5 million people across the state live within an evacuation zone of a potential crude oil train derailment.

I also spoke about how Gov. Tom Wolf appears to be focusing on this issue more than his predecessor did, with the hiring of a statewide rail expert and pressuring railroads to do more to increase safety measures.

Randy Sargent, of CMU’s CREATE Lab, showed the audience horrific images of the July 2013 accident in Lac-Mégantic, Quebec, where 47 people died after an unmanned oil train exploded and plowed through the city, destroying several city blocks.

Sargent discussed how crude oil from North Dakota’s Bakken Shale is more volatile than other crudes because it contains gases that will ignite quickly when released from a pressurized tank car, similar to what happens when you open a soda pop bottle.

“We've, so far, blown up 10 of these trains in [the] U.S. and Canada and only one of them killed people in Lac-Mégantic,” he said. “The other nine were in rural enough areas that they didn’t kill anyone. But we’re pretty lucky about the nine.”

Sargent and his team have been tracking routes of these trains through Pittsburgh and counting tank cars to give people a clearer picture of the amount of crude oil transported, the frequency of the trains and their direction.

PennFuture’s Evan Endres talked about policy issues surrounding the federal government’s regulation of these tank cars as well as what state and local officials can do.

The U.S. Department of Transportation passed new rules in May, a package that took two years to develop, which set a new standard for a stronger tank car. But, because of lawsuits filed against the rules, it’s still up in the air how long the older tank cars will stay on the tracks.

Although the power to regulate trains lies with the federal government, local leaders can take steps to improve safety, including training emergency responders to prepare for accidents and asking for more money to prepare.

Endres said local leaders in Pennsylvania along crude oil train routes should be getting together and collectively voicing their concerns.

“Will that have any influence on the issue?” he said. “I think it could if they band together in a coalition and have a common voice of concern on behalf of their citizens. And I think we should be pushing leaders to do that.”

“I think we should demand, regardless of where the money comes in, that the PUC budget make that a priority,” he said.

DeMichiei, the city emergency response official, said if you live near tracks in the city, assume there’s Bakken crude oil transported there and take steps to prepare.

But, he said, the chance of a Bakken crude derailment is what he refers to as a “low-probability, high-impact event.”

“It's not likely to occur, but if it does, it's bad,” DeMichiei said.

He said the city has done a risk assessment of the trains in the city and identified critical infrastructure and special-needs populations, including schools and nursing homes, within a half-mile of either side of tracks carrying crude oil.

But, "we have limited resources and we can only do so much,” he said, pointing out he has an office of four people who worry about flooding and many other potential dangers in the city.

He said the city has put together “planning districts” along routes. “Looking at access points to get to the rail lines, location of fire hydrants, location of critical infrastructure within that area and work with police, firemen and EMS to develop emergency [procedures] for those locations,” he said.

The city won’t be making the assessment public because he doesn’t want to give the “bad guys,” meaning terrorists, the information, he said.

“We don't want to give them a playbook on the best way to kill people,” he said.

Throughout the debate over crude oil trains, some officials and the railroads have argued that making information available on train routes would be risky because potential terrorists could blow them up. But critics have argued that this is an empty argument for keeping routing information secret because trains move so frequently and conspicuously through cities.

And “why, on God’s green earth would you run basically a bomb on rails through an urban area?” DeMichiei said.

It’s because the best maintained tracks are those in cities that also host passenger trains. Those are the safest to run hazardous materials on, he said, explaining the argument against rerouting trains around cities.