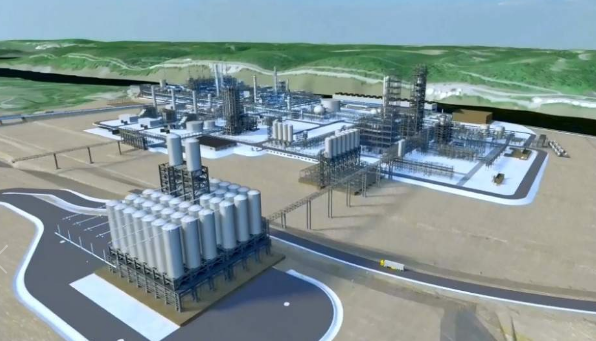 After four years of deliberation, Royal Dutch Shell announced today that it will begin construction on a multibillion-dollar ethane cracker plant in Beaver County.

The plant, which will be erected along the banks of the Ohio River in Potter Township, will reportedly generate 600 jobs when completed and employ roughly 6,000 people during construction, according to a statement released by Shell.

Amid positive feedback from local government officials that the petrochemical plant will boost the economy, but there are still questions about the plant’s toll on regional air quality.

The Shell plant will harvest ethane, a component of natural gas found in the Marcellus Shale deposit, and process it — or “crack” it — into ethylene. This petrochemical is then used to create plastics, resins, adhesives and other synthetic products used to create beverage containers and plastic wraps, according to The Allegheny Front.

As the first ethane cracker to be built outside the Gulf Coast in 20 years, the plant has potential to introduce related industries to the area,  according to a story by The Pittsburgh Tribune-Review. Dennis Yablonsky, CEO of the Allegheny Conference on Community Development, told the newspaper that Southwestern Pennsylvania will now be on the radar for investors:

We believe that a capital investment of this magnitude indicates to other companies in the energy, petrochemical and plastics industries that southwestern Pennsylvania should be on their shortlist of locations for new facilities and expansions.

The project is monumental; the building of this plant will be equivalent to the construction of 25 stadiums. This announcement accelerates our growth to a next level and will provide even more opportunities for our young people.

Gov. Tom Wolf assured the public that the plant will be environmentally responsible:

My administration is committed to creating jobs in the energy industry through responsible, well-regulated extraction and long-term, creative industrial growth. We have worked to develop strategies for safe and responsible pipeline development that brings resources to markets and facilities and we have prioritized the Shell plant to show the world that Pennsylvania is a leader in energy manufacturing and downstream production.

Despite the positive influence on the economy, ethane cracker plants have the potential to emit nitrogen oxides, sulfur dioxide and particulate matter, according to a 2013 analysis by the FracTracker Alliance, a nonprofit that compiles resources on oil and gas related issues. The pollution is also linked to highly reactive volatile organic compounds, which react with sunlight to create smog, or ground-level ozone.

Researchers with FracTracker Alliance also found that large releases of formaldehyde and acetaldehyde related to ethane cracking could increase the risk of cancer in the immediate proximity.

According to a June 2014 story by the Pittsburgh Tribune-Review, Shell’s pollution estimates showed the potential to emit double the volatile organic compounds that any nearby facility produced in 2012, based on information from the state Department of Environmental Protection.

Ozone can aggravate asthma and increase susceptibility to respiratory illnesses like pneumonia and bronchitis, according to the Environmental Protection Agency. The Pittsburgh region has not attained the national standard for ozone, so any new sources of its components will be watched closely by regulators and environmental groups.

Larry J. Schweiger, president of environmental group PennFuture, weighed in on the ramifications of a cracker plant in Western Pennsylvania. He noted that, among other pollutants, carbon dioxide is a key concern.

“The idea that the plastic industry is entering the area is very questionable… [the plant] will be a significant source of pollution in the form of carbon dioxide,” he said.

Carbon dioxide is one of the main contributors to climate change.

Permit requirements dictate the amount of pollutants plants like the Beaver County cracker may emit, Schweiger said, but he added that any impact on air quality is concerning.

“It simply adds to the overall burden of climate change,” he said. “We’re seeing more storms and more droughts and exaggerated temperatures in places like Canada. From a local standpoint, it’s not as serious of a problem. But it’s still another source of carbon dioxide.”