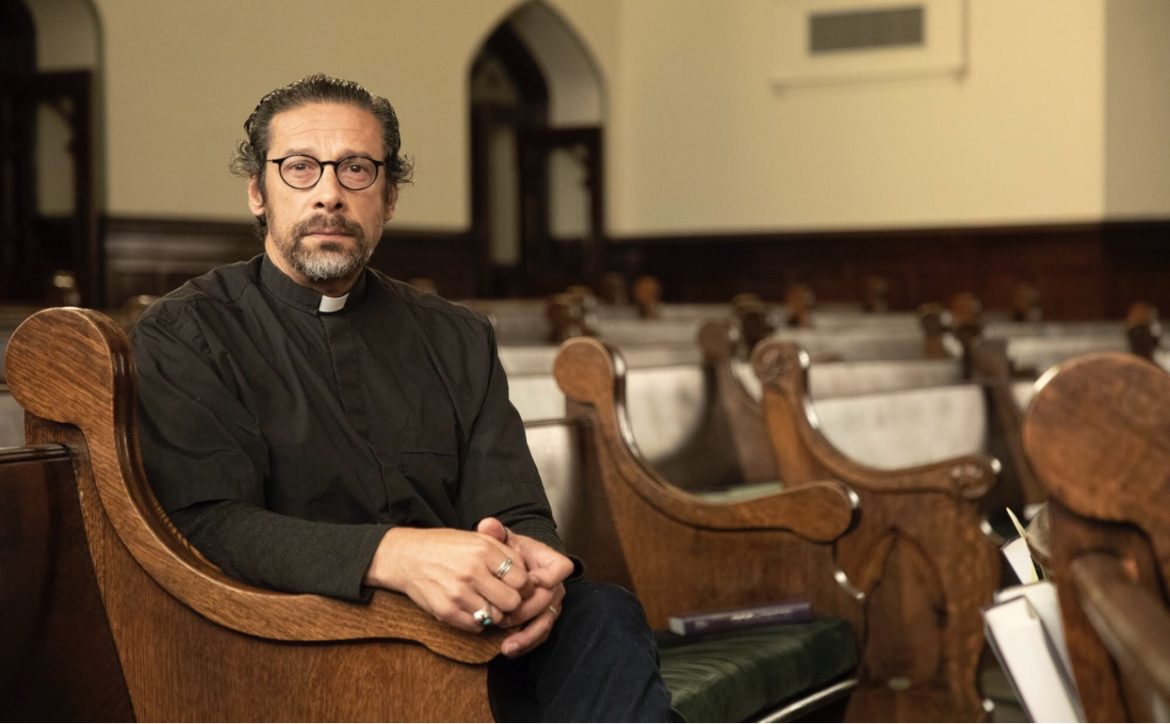 Sixth Presbyterian Church Rev. Vincent Kolb. The church is located in the Squirrel Hill neighborhood of Pittsburgh, where the Tree of Life Synagogue shooting occurred. (Photo by Kat Procyk/PublicSource)

On Sunday, Oct. 28, the Sixth Presbyterian Church choir sang, “Abide with me; fast falls the eventide” — a funeral hymn. Eleven chimes rang at the end of the service to commemorate each victim of the deadly shooting a half-mile away at the Tree of Life synagogue.

Rev. Vincent Kolb spoke during the service about the “blind spots” exhibited by people who act out of hate. Those blind spots, he said, are what we, as a society, need to overcome to move forward and collaborate as a “human community.”

Kolb said he was in shock when he heard news of the shooting, though the surprise quickly wore off, “given the escalation of rhetoric that has been xenophobic, misogynistic and racially inspired.”

Faith has been Kolb’s consolation while coping with the tragedy.

“I am hopeful because I’m a person of faith,” Kolb said. “Our faith teaches us, our sacred scriptures say, that the perfect love of God reveals that Jesus Christ casts out our fear, and basically what is the greatest obstacle to us is the deep fear that is within people.

“So we need to trust that there is something greater in the world than our fear that can unite us and heal our divisions.”

Kolb said a “major conversation” has been scheduled between Pittsburgh clergy and spiritual leaders for future collaboration after Saturday’s events.

When Kolb spoke at the Saturday night vigil in the heart of Squirrel Hill, he said he made clear that his church has “zero tolerance” for anti-Semitic speech, behavior or crime.

"So we need to trust that there is something greater in the world than our fear that can unite us and heal our divisions.”

The Sixth Presbyterian Church, at the intersection of Murray and Forbes avenues, has a long-held tradition of mutual respect and commitment to its neighboring Jewish community, Kolb said. The relationship has inspired an annual interfaith Thanksgiving service on the Tuesday night before the holiday. It’s open to both the Abrahamic faiths and others.

The biblical values of justice, compassion and inclusion drew Kolb to the church roughly five years ago, he said. He has been preaching there ever since.

As a young person, Kolb left the Catholic Church. He came to the Presbyterian faith. His own life had become “troubled,” he said, and within the Presbyterian community, he experienced forgiveness and compassion.

“When I had an experience of a community welcoming me and saying I can begin again, I wanted to be a part of that world, which I believe is God’s, which is that you and that I can begin again with no questions asked,” Kolb said. “That there is grace for our failures. That there is love in the midst of fear. And that there is a peace that passes all understanding.”

Kat Procyk can be reached at kat@publicsource.org.