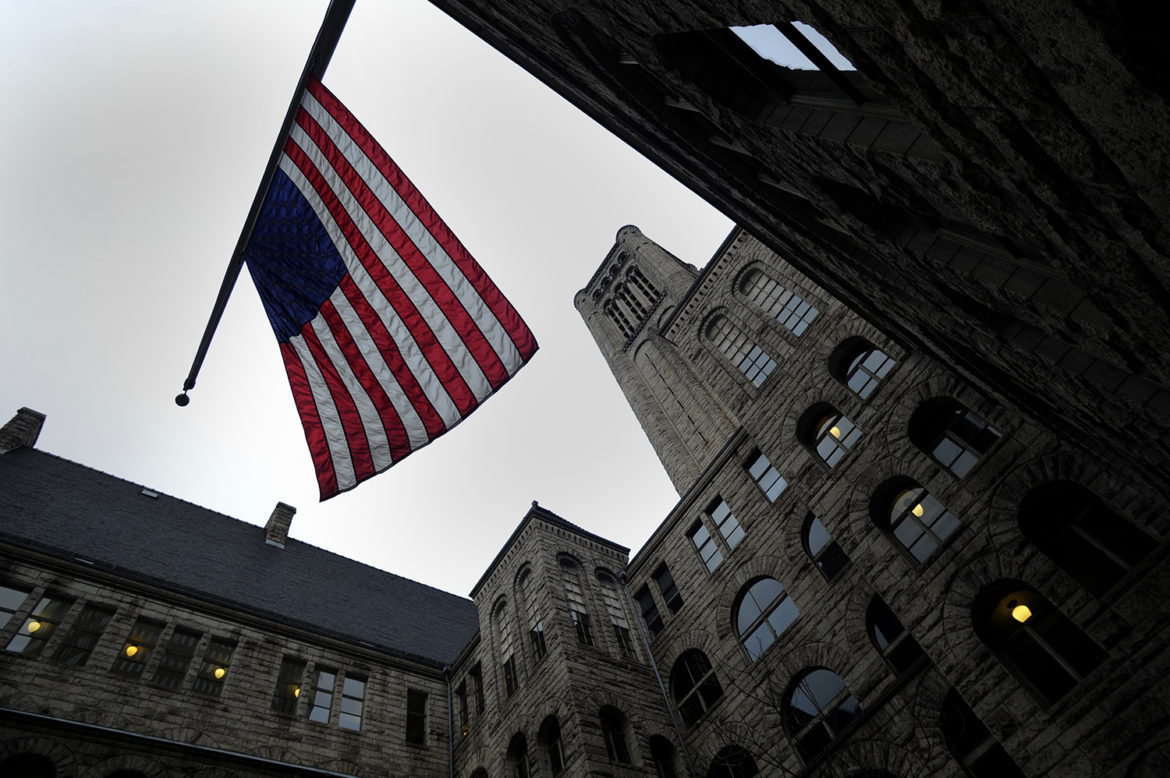 The Pennsylvania Commission on Sentencing is considering a “risk assessment” tool, which, according to social justice activists, would reinforce existing bias in the criminal justice system. But the tool’s designers say it would give judges more data to base sentencing decisions on as opposed to primarily relying on uniform guidelines.

The commission is hearing public feedback about the risk assessment tool on Thursday, Dec. 13, from 10 to 11:30 a.m. at the Allegheny County Courthouse (436 Grant St., Pittsburgh).

How would the “risk assessment” tool work? Say you’re facing a criminal charge. In addition to the usual information about your present and past — as in the crime for which you are on trial and your prior record, if any — the judge also has a report trying to predict your future. On a scale from 0 to 18 points, an algorithm has indicated how likely you are to reoffend, based on data about recidivism rates.

If you’re male, you get one point instantly. You also accumulate points based on your age. Anyone under 21 gets five points. Those between 21 and 25 get four. The points lessen as birthdays go by until age 49 at which point a defendant would receive no additional points based on age.

The other points would be decided by the nature of the current offense and past convictions. Two points get added if you’re coming to court that day to face sentencing on a burglary or weapons conviction. Many other types of crime would add one point. You’d get an extra point if you were involved in another ongoing criminal case. Points would be added for the number and nature of past convictions. Finally, if you have any juvenile record, you’d get another point.

If you score fewer than four points, you’re supposedly at low risk for committing another crime. If you rack up 10 or more, you’re at a high risk for reoffending.

The risk assessment tool, properly known as Sentence Risk Assessment Summary, has been eight years in the making. The General Assembly first mandated it in 2010. Algorithms and data tools for predicting recidivism have become commonly used by courts. Many courts utilize COMPAS (the Correctional Offender Management Profiling for Alternative Sanctions), developed by the private company Equivant. 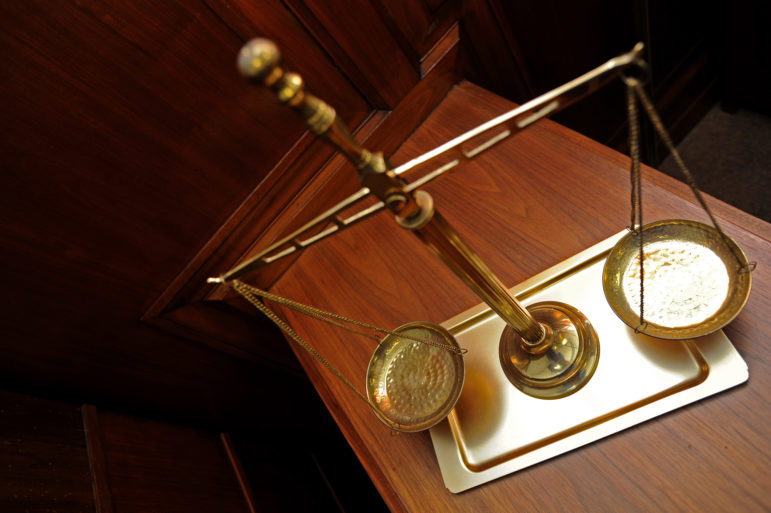 A judge's desk in an Allegheny County courtroom. (Photo by Connor Mulvaney/PublicSource)

The commission has already held one public hearing this month about the tool, with others scheduled for Monday afternoon in Stroudsburg, Wednesday morning in Philadelphia, and the fourth on Thursday in Pittsburgh. It is not yet certain when the 11 appointed members of the Pennsylvania Commission on Sentencing will vote on if the tool will be implemented. If they approve it, the tool will go into effect in Pennsylvania courts; the General Assembly, however, could vote to reject it.

At least one member of the commission believes the critical feedback heard throughout the public hearings will kill the effort.

Nyssa Taylor, Criminal Justice Policy Counsel of the ACLU of Pennsylvania, is one such critic raising the alarm. “Pennsylvania has a severe mass incarceration problem, and this would lead to more and not less incarceration.” The tool “would bake in bias” to the sentencing system and also “conflate risk with character,” she said.

The algorithm would flag certain defendants for more supervision or lesser penalties on the spectrum of the sentencing guidelines, according to Mark Bergstrom, a criminologist who serves as executive director of the Pennsylvania Commission on Sentencing.

“The mandate [from the state Legislature] focuses on identifying high- and low-risk offenders,” he said. A judge could see the person’s low score and choose a lenient option. Alternatively, a high score could encourage a judge to add additional probation time or supervision because the score indicates likelihood of the person committing another offense.

Bergstrom said he and his colleagues used a variety of statistics and figures, many of them coming from Pennsylvania courts, to determine who is more likely to commit another crime. For example, studies have repeatedly shown that repeat offenders often commit the most crimes in their teens and 20s, with a drop-off in later ages.

Of course, that does not mean that every 19-year-old with a record is a ticking clock waiting to commit another crime. Bergstrom said judges should not use the Sentence Risk Assessment Summary to rush to conclusions, but should use it as a guide to consider other factors before deferring to the more common sentences for that crime and situation.

“What we are saying is that we’re trying to identify when the court should get more information,” Bergstrom said.

Color of Change, a progressive African-American advocacy group, has campaigned against the tool.

“I think that any tool that is trying to predict a crime is problematic,” said Clarise McCantes, the group’s criminal justice campaign director.

McCantes said the state had good intentions in trying to standardize judicial assessment of defendants, but the criminal justice data is born out of a system that disproportionately incarcerates minorities.

“It was created to remove racial bias from judges,” she said, “and it’s replacing it with a racist computer tool, which is harder to hold accountable.”

“What we are saying is that we’re trying to identify when the court should get more information.”

Taylor of the ACLU said it’s a “little naïve” to think a judge would be inquisitive, rather than alarmed, by a report assigning a defendant a number score that predicts chances of committing a future crime.

She said that because minority areas are over-policed and black people are incarcerated at a much greater rate than white Pennsylvanians, measures of how likely a person is to reoffend are actually measures of how likely a black convict is to reoffend. White Pennsylvanians, she said, are less likely to have that initial contact with the criminal justice system. “It’s bad data in and bad data out.”

Scoring young age heavily also contradicts recent thinking and major rulings that youthful offenders have not yet fully formed skills in judgment, she said. For example, the U.S. Supreme Court in 2012 deemed mandatory life sentences without parole for juveniles unconstitutional and applied it retroactively in January 2016, overturning thousands of sentences.

“Often, [judges] do a balance because of the way juveniles think and there is some leniency, when age is taken into account,” Taylor said.

“We are urging the commission to reject the tool and we think it’s problematic.”

Commission member state Sen. Sharif Street, said the commission is seriously rethinking the tool after critics have battered the idea in a series of public hearings.

“I think it’s on life support, at best,” said Street, a Democrat whose district is in Philadelphia.

Street said the commission’s staffers did a “yeoman’s job” of creating the algorithm, but since they started in 2010, risk assessment tools have been scrutinized and evolved.

At public hearings, “[t]here was a lot of skepticism,” Street said, “from the left and right, on whether what we’re doing makes constitutional or practical sense.”

Nick Keppler is a Pittsburgh-based freelance writer who has written for Reuters, Slate, Mental Floss, Vice, Nerve and the Village Voice. Reach him at nickkeppler@yahoo.com.