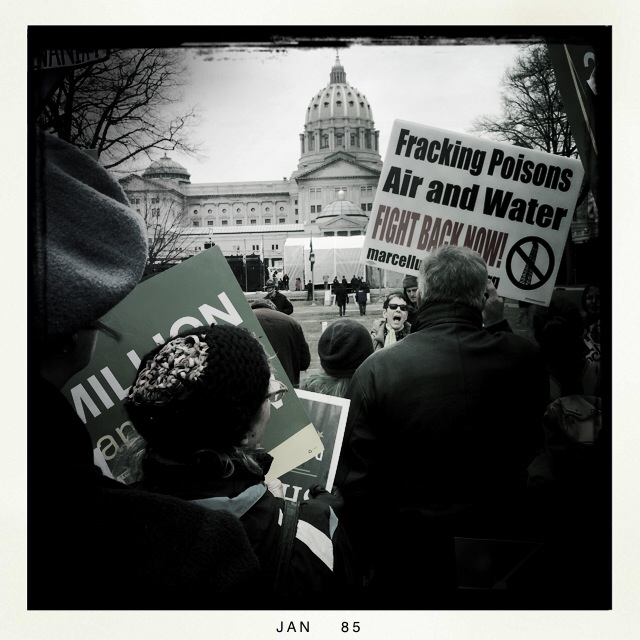 Eight people protesting fracking were arrested today at Gov. Tom Wolf’s inauguration. State police arrested the protesters for disorderly conduct after they interrupted Wolf’s speech by whistling and shouting at him, urging him to ban fracking, according to StateImpact Pennsylvania.

Several hundred more protesters were kept about 100 yards away from the ceremony and loudly chanted “Ban fracking now!” throughout the program.

Wolf addressed the activists directly in his speech, saying that Pennsylvania is blessed with an abundance of natural resources, including gas.

“To the protesters here today, I say: help me develop these opportunities in a way that is clean, safe and sustainable.”

Wolf campaigned on the promise of implementing a 5 percent severance tax on natural gas. In a focal point of his campaign, he said he’d use those funds, which could bring in a whopping $1 billion, to boost funding for education. Wolf has said he wants his administration to work with drillers to help the energy industry succeed.

Despite Wolf’s positions, anti-fracking activists remain hopeful they can make their case to him. They recently formed a new coalition called Pennsylvanians Against Fracking in an effort to push for a statewide ban.

“We believe that we’re dealing with somebody who is open to reality and who wants to make the right decisions,” Delaware Riverkeeper Maya van Rossum says of Wolf.

Several of the group’s leaders were heavily involved in the push to halt fracking in New York, which proved successful late last year when Gov. Andrew Cuomo announced he would ban it.

Both Wolf and Cuomo are Democrats.