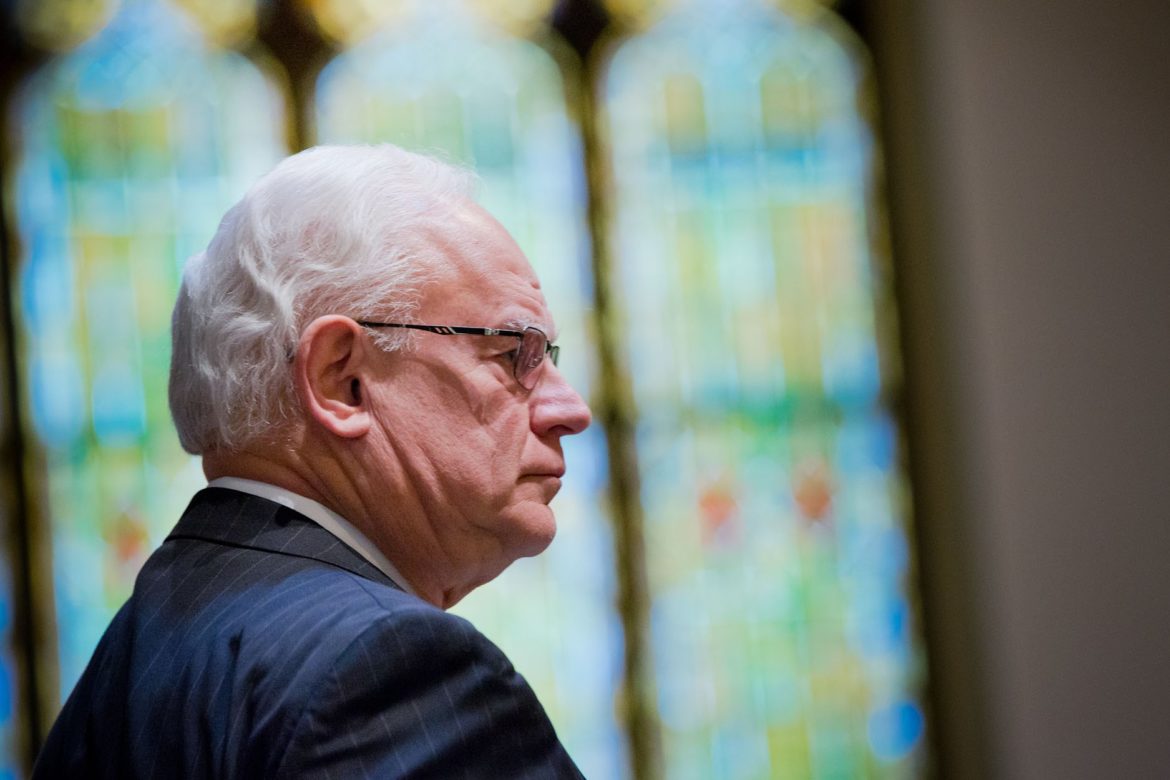 Larry Schweiger, chapter co-chair of the Climate Reality Project-Pittsburgh and former CEO of PennFuture, the National Wildlife Federation and the Western Pennsylvania Conservancy, addresses the audience at the Sixth Presbyterian Church in Squirrel Hill on March 24, 2018. (Photo by Heather Mull/PublicSource)

The first person who stood up at a Saturday night lecture on fracking in Squirrel Hill was supposed to ask a question. But instead, she said she had an announcement.

"It is my job...to remind everybody that the cracker plant is not a done deal,” said Terri Supowitz of Wilkinsburg defiantly, referring to Shell Appalachia’s plan to build an ethane cracker plant in Beaver County. "Shell wants you to believe that, so everybody will go about your business. It is never a done deal. It will never be over for us."

More than 100 people showed up to Sixth Presbyterian Church in Squirrel Hill to listen to and ask questions of Larry Schweiger, one of the region’s most prominent environmentalists. Schweiger has led both the National Wildlife Federation and more recently PennFuture, a Pennsylvania-based environmental advocacy group.

It was clear that, in addition to his expertise, the crowd wanted practical answers about what they should do next — and specifically what they could do to stop the more than 2.2 million tons of carbon dioxide that the cracker plant is expected to emit annually. 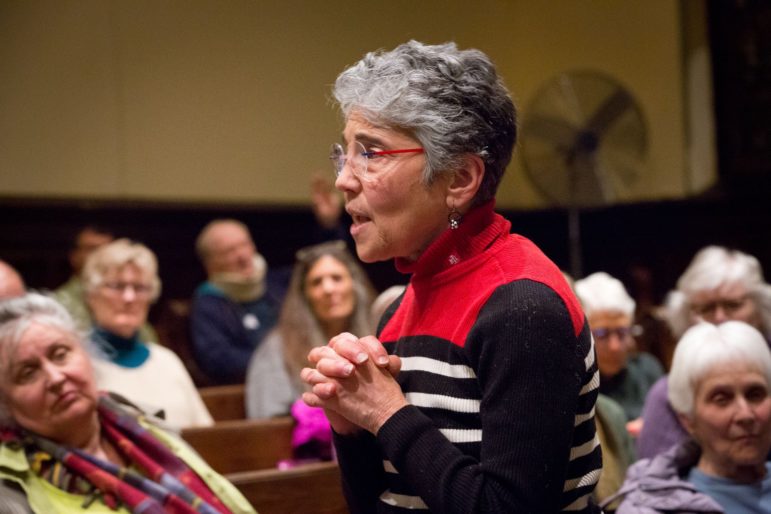 Terri Supowitz of Wilkinsburg at the March 24 lecture by leading environmentalist Larry Schweiger who spoke about fracking and the environment at Sixth Presbyterian Church in Squirrel Hill. (Photo by Heather Mull/PublicSource)

The cracker plant will produce the feedstock for plastic. Schweiger said plastics are collecting in the oceans and in our bodies, disrupting both. And he said the energy it takes to produce plastics isn’t worth the carbon emissions.

Still, the audience wanted to know what more they could do.

"Local politicians have been extremely quiet about the Shell cracker but are extremely loud about supporting the Paris Climate Agreement,” said Mark Dixon, a local filmmaker and environmental activist. Dixon asked what could be done to get politicians to speak out more against the cracker plant.

Schweiger didn't provide specific steps in response, but he said there's a need for new blood at the state and national levels and that he felt the midterm elections had the potential to make progress there.

Rev. Vincent Kolb, the pastor at Sixth Presbyterian, asked a question on behalf of the skeptics in his congregation: Why would Schweiger want to eliminate the natural gas industry when the low price of gas was responsible for shutting down the even dirtier coal plants?

Schweiger’s answer was two-fold. He said the United States would fall behind countries like China and India if they don’t take action on renewable energy. And, he said that because of methane leaks in gas pipelines, natural gas may not actually be any cleaner than coal in the medium term.

"It is never a done deal. It will never be over for us."

Schweiger had spent the previous hour leading the audience through an Al Gore-style climate lecture, which started off with the impact of fracking and then broadened to climate change. Schweiger helped Gore found the Climate Reality Project, which has trained more than 12,000 people nationally to give these kinds of presentations.

Although he referenced the potentially harmful health effects of fracking, including recent studies on how fracking may contribute to the low birth weight of newborns, he spent the most time on fracking’s impact on global warming.

Schweiger’s slideshow followed a familiar format to Gore’s famous “Inconvenient Truth” presentation: He inundated the audience with evidence of the Earth’s rising temperature underscored by pictures of doomed animals and cities torn apart by storms, wildfires and pestilence. 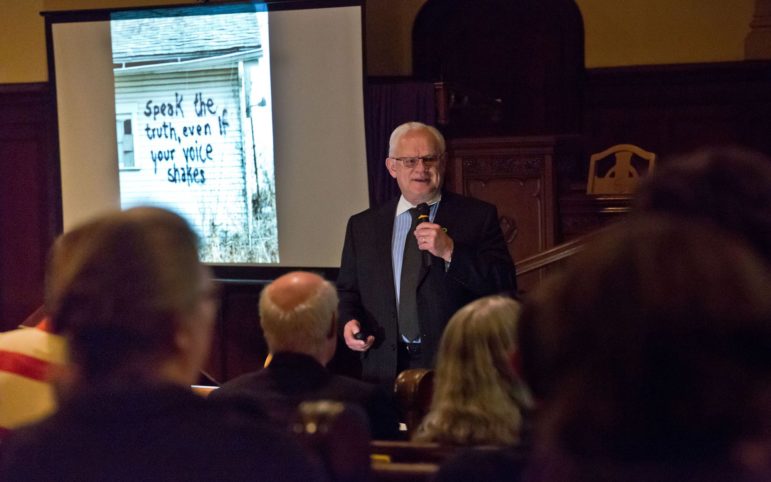 Larry Schweiger, chapter co-chair of the Climate Reality Project-Pittsburgh, gives a presentation at the Sixth Presbyterian Church in Squirrel Hill on March 24, 2018, on the topic “Fracking In Our Future?” (Photo by Heather Mull/PublicSource)

One audience member said the most compelling part of Schweiger’s presentation was the message about the local tradeoff between high tech and plastic jobs: Pittsburgh is at a crossroads, Schweiger said, and the city will have to choose between a high-tech and medical future or becoming “the plastic headquarters of the free world. We can’t do both.”

The audience member asked, “What was the data to point to to make that case?” Schweiger told the crowd there is research available that information-economy workers could live almost anywhere and wanted to live in environmentally friendly locations.

Another audience member wanted to know what he personally should be doing in his own home: Replace his furnace with a more efficient one? Or move away from gas entirely and toward electricity?

Schwieger said he has installed solar energy and more insulation in his home and his monthly electric bill fell to the minimum of $11 per month. But he said everyone needs to decide what they can afford on their own. “We all need to be doing everything we can.”

One audience member was concerned about what this means for the many people who can’t afford to take on the extra expense of hybrid vehicles and solar panels.

To that, Schweiger said he believes the answer lies in the country putting a price on carbon. The money raised could go to support low-income residents who have trouble affording environmentally friendly options.

He then detailed 25 years of failed efforts to enact legislation to put a price on carbon, starting with former Vice President Gore up through more recent efforts with Republican Arizona Sen. John McCain “that died in committee.”

The city will have to choose between a high-tech and medical future or becoming “the plastic headquarters of the free world. We can’t do both.”

Schweiger predicted that the political tides were already turning in state and national elections, which may make 2018 the year that finally brings about the change needed for climate legislation. "I think we are going to see a wave election this year, and it can’t happen fast enough,” he said.

His hope, he said, comes from the hundreds of thousands of people across the United States who marched for gun legislation earlier in the day, led by high school students.

Schweiger dedicated his speech to the students of Marjory Stoneman Douglas High School in Florida and, in particular, Emma Gonzalez, one of the student leaders. Earlier that day, Gonzalez stood silently on live television for more than four minutes, counting down the time it took for a shooter to kill 17 of her classmates.

“'We are behind her,” Schweiger read a quote from Gonzalez’s mom, "but we should have been in front of her years ago.’ I couldn’t agree more with Emma’s mother."

2 thoughts on “Pittsburghers ask leading environmentalist: How can we fight climate change and impacts of the planned cracker plant, fracking?”