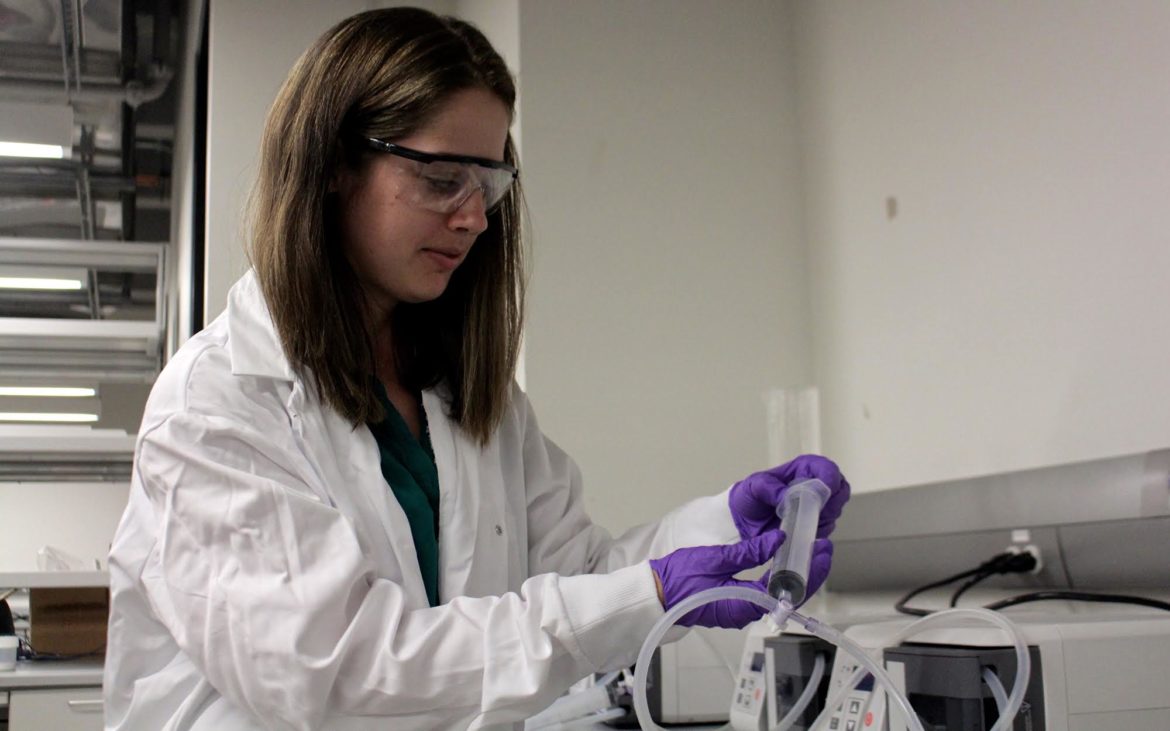 Katherine Hornbostel, an assistant professor at the University of Pittsburgh, simulates performing an experiment to extract carbon dioxide from ocean water. (Photo by Jay Manning/PublicSource)

As the climate crisis looms, cities have to deal with a lot of uncertainty: How much warmer will the Earth get as we emit more and more greenhouse gases? There is a range of possible answers. At the low end, the temperature rise is expected to cause massive disruptions but at a scale less damaging to humans. At the high end, there will likely be catastrophic change.

Pittsburgh researchers are looking at a variety of climate problems, including how to pull carbon dioxide directly from the air, how our infrastructure needs to adapt to increased rainfall and the difficulty of precisely measuring how much the Earth will warm.

One of the biggest obstacles to calculating exactly how much the Earth will warm is our limited understanding of clouds, according to Neil Donahue, the director of the Steinbrenner Institute at Carnegie Mellon University [CMU].

Clouds can make the Earth warm up less quickly because they reflect sunlight away. And it turns out that some forms of air pollution may have the unexpected consequence of making clouds that are brighter and have more of a cooling effect. The cooling from these brighter clouds has partially masked the additional warming from the extra carbon dioxide in the atmosphere. But it’s not clear by how much. 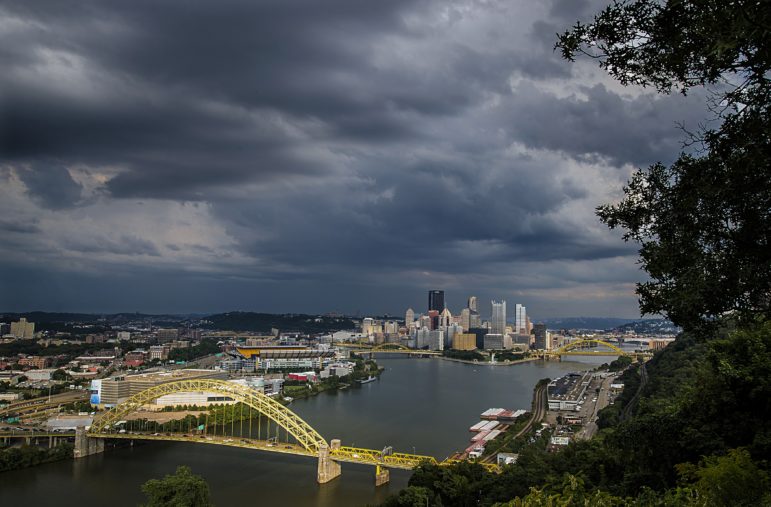 Clouds are one of the most challenging scientific problems in climate science, according to Neil Donahue, a climate researcher at Carnegie Mellon University. (Photo by Teake Zuidema/PublicSource)

“We’ve made huge advances in the fundamental understanding of that in the past 10 years,” Donahue said.

Donahue is part of an international team at the European Organization for Nuclear Research [CERN] that has been working to create a better model of changes in the Earth’s climate. CERN is the same laboratory that discovered the Higgs boson particle, one of the most important recent discoveries in physics.

So one of the perverse consequences of cutting back on particle pollution, Donahue said, will be discovering that the Earth could get hotter more quickly. Less particle pollution could mean clouds that repel less heat.

That doesn’t mean that we should stop trying to limit pollution, he said, because air pollution kills 5 to 7 million people every year through lung disease and other ailments. But it does point to the best way of tackling the problem at its source: stop using fossil fuels. Fossil fuels are the source of both the pollution particles, which are cooling the Earth, and the greenhouse gases that are warming it even more quickly.

“When we deal with fossil fuel combustion in general, we’ll stop accelerated climate change and save a whole bunch of lives,” he said.

How much warmer the Earth will get is an important question because it helps governments determine what they need to do to adapt. At present, many state governments are not taking climate change into account enough when they build infrastructure, according to Costa Samaras, the director of the Center for Engineering and Resilience for Climate Adaptation at CMU.

A paper Samaras co-authored last year showed that some state construction codes were not requiring stormwater systems to be built with climate change in mind, including in Pennsylvania. That means the pipes they build, which are designed to last for decades, won’t be able to accommodate some of the increasingly intense rainfalls they will have to capture as a result of climate change. That will lead more roads to overflow and basements to flood.

Jordan Fischbach, co-director of the RAND Climate Resilience Center, has helped lead the effort to take these broad insights — that local governments need to be investing more — and apply it to a few hyperlocal situations, including in Pittsburgh. There isn’t a one-size-fits-all solution, he said, so each locality needs to figure out what and how much it should be investing to adapt to climate change. This work has typically been done in larger urban areas with more staffing and expertise, and in high-risk areas, like coastal areas that can flood, he said.

RAND brought its modeling work to Pittsburgh to help the community think through how it should respond to the additional impact of climate change on the region’s stormwater systems. Prior to the RAND study, the Allegheny County Sanitary Authority [ALCOSAN] estimated that the region’s stormwater system flushes 9 billion gallons of sewage overflow into its rivers every year based on a typical year of rainfall.

By looking at more than a decade of the recent rainfall data, RAND researchers estimated that the real number could be closer to 11 billion gallons. “We learned that whatever investment is made to meet historical typical year rainfall is almost definitely not going to solve the future rainfalls,” Fischbach said. 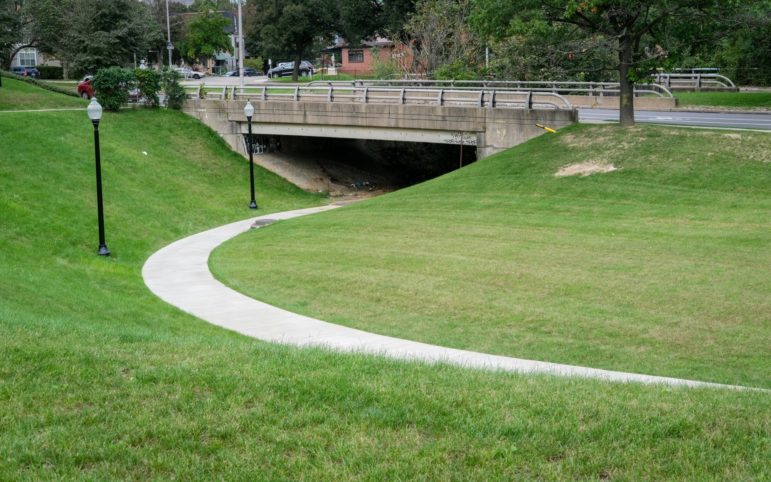 The Liberty Green Park in Larimer could serve as the symbolic head of the Little Negley Run stream, a massive green infrastructure project in the planning stages in Pittsburgh. (Photo by Terry Clark/PublicSource)

RAND’s results have immediate relevance, as ALCOSAN is about to invest between $2 to $4 billion in upgrades to manage the sanitary sewage overflows that have put the region out of compliance with the Clean Water Act. On Sept. 19, ALCOSAN Executive Director Arletta Scott Williams said the authority did not use estimates on how climate change will impact rainfall in developing its plan for rebuilding sewers.

Fischbach said RAND’s study also showed that local agencies were likely underestimating how much money should be spent to deal with all of the problems that come with excess rainwater, including flooding, landslides and sewage overflows. And that’s an extra challenge in the Pittsburgh region because there isn’t a single body responsible for advocating for all the necessary water investments needed.

“You have this big problem, you have urban flooding," Fischbach said, "but no one owns it at the regional scale with the ability of doing this kind of long-term planning.”

While many scientists are trying to understand how destructive climate change will be and what we can do to slow it down, some researchers are focused on what to do if we can’t move fast enough.

Pittsburgh is at the center of one of the most important and controversial areas of climate change research: carbon capture. The process entails taking carbon dioxide directly out of the air. One way this is done by pushing air through a kind of filter that removes the carbon dioxide. The Department of Energy's National Energy Technology Laboratory, which is headquartered in Pittsburgh, funds much of the country’s carbon capture research.

Traditionally, most of the research dollars have gone to trying to capture carbon directly from coal and gas power plants, according to Katherine Hornbostel, an assistant professor researching carbon capture at the University of Pittsburgh.

“The good news is it’s good that we’ve done that. The tech and research is pretty mature for power plants,” Hornbostel said.

The technology works, but she said the primary reason carbon capture is not in wide use is because of the cost. It can cost a big power plant more than $1 billion to install carbon capture technologies and, right now, there is little financial incentive to do it. That would change if the federal government passed a carbon tax or incentivized policies to reduce greenhouse gas emissions, Hornbostel said.

She said power plants needed to have carbon capture technology installed “yesterday” because the problem is so urgent.

Some scientists say that using carbon capture to eliminate emissions from power plants won’t be enough to reduce carbon emissions. Instead, we’ll need to create negative emissions by taking carbon dioxide that has already been emitted into the air. Hornbostel said funding and attention have just started to shift to this newer and more complicated problem. It’s a bigger challenge to get carbon dioxide out of the air because it’s so much less concentrated in ordinary air (one out of 2,500 particles) than in the exhaust of a power plant (one out of every 10 particles).

Hornbostel is taking an unusual approach in her research by attempting carbon capture in the ocean. Because water is denser than air, she said, it might be possible to pass water more efficiently through a carbon capture technology than air.

Carbon capture is controversial because some environmentalists worry it might give people a feeling of complacency: If we can take carbon dioxide out of the air later, will there be less urgency to stop emitting so much carbon dioxide now? They believe that it would be better for the environment and cheaper to opt for renewable energy instead of allowing carbon capture technology to be added onto the normal production of coal and gas energy.

Hornbostel and many other scientists believe that we’ll probably have to do carbon capture to remove emissions from the environment. “Long term,” she said. "we’ll have to capture from the air and ocean at a large scale to keep our planet from burning."