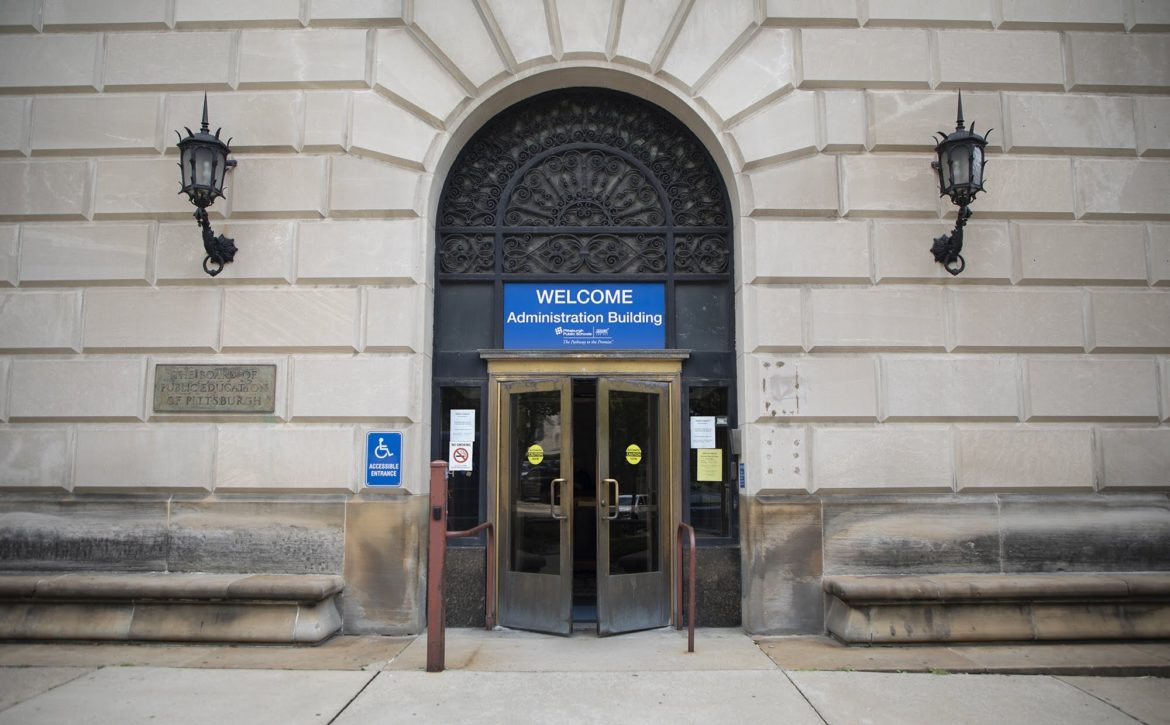 The Boad of Public Education of Pittsburgh Administration building located on South Bellefield Avenue in Oakland. (Photo by Kat Procyk/PublicSource).

With the weight of an unprecedented year on their shoulders amid the ongoing COVID-19 pandemic, members of the Pittsburgh Public Schools board decided against a proposed property tax increase and adopted a $673.84 million school budget for 2021 on Wednesday. The district will keep its millage rate at 9.95 in the upcoming year. However, with that vote, the budget deficit is expected to grow by about $4 million, Chief Financial Officer Ronald Joseph said at the meeting.

In remarks to the board at the top of the budget discussion, Superintendent Anthony Hamlet asked the group to consider the tax increase to 10.21 mills and said that it was just one strategy of a multi-pronged approach by the administration to address a $34.8 million deficit — now increased by $4 million without the tax increase. The plan includes reducing expenditures.

Much was at stake in the 2021 budget. Hamlet released the district’s preliminary budget to the board on Nov. 12. The $673.84 million budget represents an increase of about $9 million from the 2020 adopted budget of $664.80 million.

The budget adopted Wednesday reflected battling interests in a year where the district, still recovering from financial shortfalls, must address increased costs and growing student needs either created or exacerbated by the COVID-19 pandemic, from Community Learning Hubs to rising charter school payments. Advocates from multiple activist groups in recent weeks have called on the board to divest from police and security and increase student support services, as well as to increase funding for Community Learning Hubs, small learning hubs set up by nonprofits throughout the city to serve students whose caregivers are unable to assist with online schooling during the day. Here are some takeaways from the board’s December legislative meeting.

Proposed tax increase struck down by the board

A proposal to increase the district’s millage rate to 10.21 failed on Wednesday in a vote where five board members voted no and one abstained, following an extended conversation about the impact a tax could have both on the community and on the budget deficit. Multiple board members expressed concerns about the property tax increase, which would have come as economic conditions worsened due to the ongoing pandemic. At 9.95 the district millage rate is among the lowest for school districts in Allegheny County.

What’s a millage rate? When was the last time it was raised? Find out here.

Why didn’t they raise taxes?

Several board members spoke about not wanting to increase hardships on families already struggling to adjust to virtual learning and the pandemic, which for some families resulted in job losses and exacerbated learning inequities.

Board Member Veronica Edwards spoke about her experiences helping students and families to get access to essential services since the pandemic struck in March, "to make things a little easier for them."

"For me to go back [to them] and say, ‘Well, we increased taxes,’ while their children aren’t in school and struggle to be on the computer…I cannot in good conscience bear a harder burden on these people,” Edwards said.

“Our student population has gone down. ... And the students, since March, have not been in school, in the school buildings,” Udin said. “Now some of us will say that does not have a proportionate effect on the cost of running the school district, but I think in the minds of taxpayers, they believe that schools not being in session should create an overall reduction in costs, and they don’t understand why if schools are not in session and the buses are not rolling, why we are being asked to increase taxes.”

"We have to find a different way to educate our kids. We can't keep doing the same things the same ways," Wilson said. She also said she wanted to remind people that last year many people fought against a modest tax increase which could have helped this year. pic.twitter.com/mu2EPYB7AC

When was the last tax increase?

What effect will this have on the budget?

The district initially calculated a deficit of $34.8 million with a 10.21 mill rate, but with a 9.95 mill rate, the district deficit will increase to about $39.5 million, an additional $4 million, according to Chief Financial Officer Ronald Joseph.

The future of learning hubs; ACDHS to fund hubs

Numerous calls from activists and community members in recent weeks have asked the board to authorize $2 million to finance Community Learning Hubs through the end of the school year. Federal funding for hubs runs out this month. WESA reported Tuesday that the county’s Department of Human Services will use its state child welfare dollars allocated to Children Youth and Families towards preserving the hub service through January.

About 700 PPS students have attended the hubs, where students receive in-person guidance on virtual education during the pandemic. There are 24 learning hubs with 64 hub locations across Pittsburgh and Allegheny County. To date, these hubs served 1,000 students in the region, at an operating cost of about $3.8 million, or about $800,000 per month, most of which covers salaries for hub staff.

At Monday’s public hearing, multiple speakers called on the board to provide funding for the hubs, a needed stop-gap for students in a new virtual learning environment who may otherwise go unconnected.

Maria Cohen, executive director of the Squirrel Hill Urban Coalition, wrote to the board to request that the board extend funding for learning hubs, and said: “We need to ensure that students do not lose any more critical learning time.”

“It is a burden for families with working parents to support young students with their online learning,” Cohen said. “Students are falling behind at astronomical rates and parents are struggling to hold everything together.”

“We know there are headwinds and challenges on the way, but the need is now. We know that they’re creating a budget for the entire year and they need to be able to meet the payroll needs and other needs that they have. But the hubs need money now to stay open.

“...And for the families that are using them, it’s essential. Many of them are essential workers … These folks need a place for their children to be safely during the day. And we know without supervision many of our children, especially our older children, are tapping out.”

Charter school tuition allocation increased. But is it on par with expenditure increases?

The 2021 budget passed Wednesday allocates $106 million to charter school payments, a nearly $4 million increase over the $102 million paid to charters in 2020. It’s unclear why the district only budgeted a $4 million increase, despite the fact that district payments to charter schools have increased each year by at least $7 million since 2017. While experts say enrollment increases are not the driving force behind charter school cost increases in the past several years, the 2020-21 school year appears to be a break from the trend. Recent reports show that statewide cyber charter school enrollment has increased by roughly 24,000 students over last year.

TyLisa C. Johnson covers education for PublicSource. She can be reached at tylisa@publicsource.org