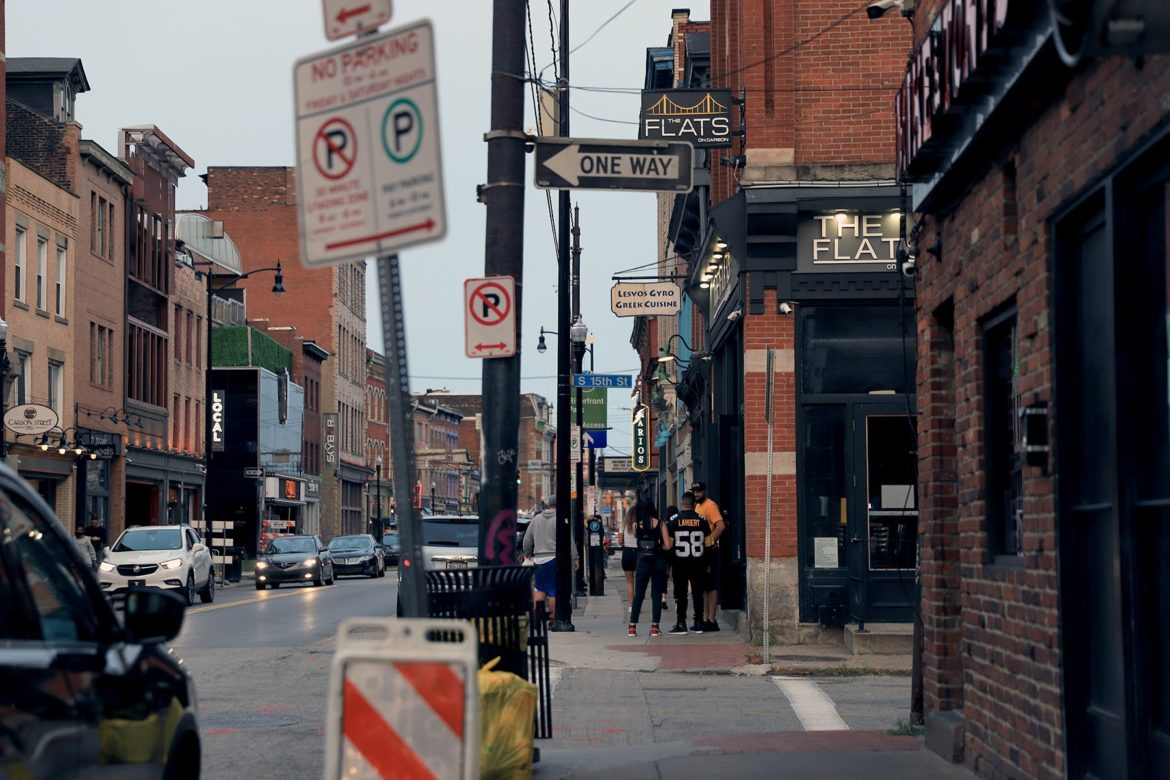 The dress code at The Flats on Carson has drawn criticism for concerns that it unfairly excluding Black patrons. (Photo by Jay Manning/PublicSource)

But some Black patrons and performers reject these proclamations. Their personal experiences with these businesses starkly contrast their corporate statements of anti-racism. In this moment of upheaval and uprising, true solidarity means taking stock of one’s own role in oppressive systems and making meaningful changes. As authors interested in genuine accountability — whose own growth and learning depended on serious engagement with past carelessness and bigotry — we spoke with two Pittsburghers about what real accountability might look like for these businesses. Their stories validated the stories of scores of Black people — on Yelp, on Twitter, and through word of mouth — who feel unwelcome and unsafe participating in the nightlife of the South Side and in other areas of Pittsburgh.

Donyisha “Yasha” Wooley, a videographer and writer from the South Side, spoke to us about her negative experiences as a patron of the neighborhood’s businesses. She recounts many stories of establishments sending racialized signals with their dress codes and bouncers interpreting clothing choices in racist ways.

One example is at The Flats on Carson, where Yasha described waiting half an hour in the winter cold only to be told her camo jacket was against dress code, an experience that matches similar stories of dress-code discrimination levied by Black Yelp reviewers. The posted dress code prohibits, among other items, basketball shoes, “flashy” jewelry and bandanas. The business did not respond to requests for comment.

Yasha notes that many discriminatory encounters in the South Side are at the hands of East Carson Street’s bouncers.

“Their energy feels like it’s provoking you. It’s like someone is staring at you, just waiting for you to make a mistake.” 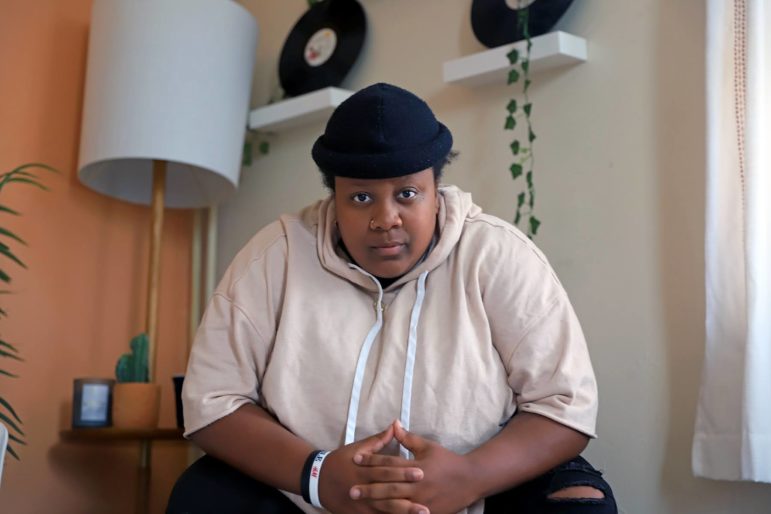 Donyisha “Yasha” Wooley, a videographer and writer from the South Side. (Photo by Jay Manning/PublicSource)

This constant vigilance ruins the atmosphere of a night out, Yasha said, especially since this harassment and exclusion by security staff plays out in the shadow of police violence against Black Pittsburghers. “As soon as I hear the cops are coming, I know they’re not coming to help me,” she said. “They’re coming to arrest me.”

INEZ, a born-and-raised Pittsburgh musician, echoed Yasha’s skepticism by recounting her experiences of discrimination against performers and patrons at venues like Spirit Lodge in Lawrenceville.

“You’re afraid of Black people,” INEZ said of Pittsburgh’s white-dominated live music and entertainment industry, “but you won’t say that.”

INEZ notes that discrimination is sometimes couched in vague appeals to security, yet there are “very few spaces in Pittsburgh that allow Black women, Black femmes and Black queers to be accepted, respected and to feel safe,” INEZ said.

Performing on stage is a “sacred place” for her, she said, “literally the only place on Earth where I don’t have to think.” Concerns about racism by venues and their staff against Black patrons interrupt this spiritual experience. 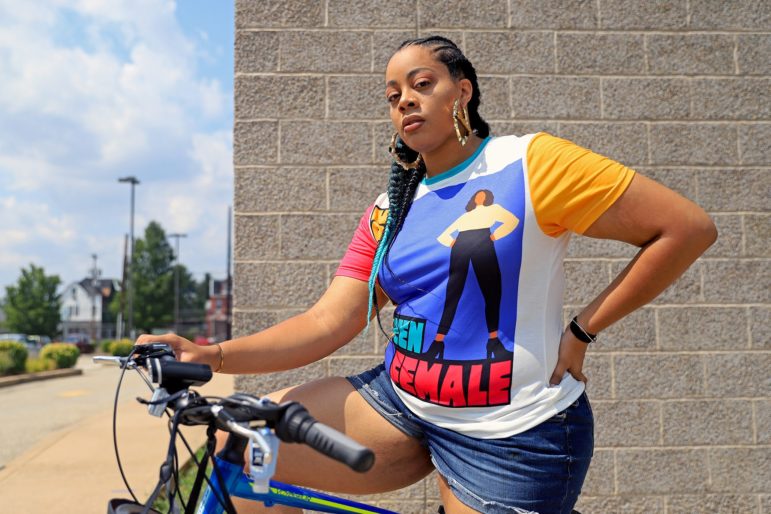 INEZ, a musician and Pittsburgh native, is concerned by the treatment of Black artists in the city's music scene. (Photo by Jay Manning/PublicSource)

These concerns are what led INEZ to stop playing shows at Spirit in February.

She described an instance where a Black friend paid to host an event at Spirit before being asked to pay more for extra security. In another instance, INEZ watched as three Black men were told they couldn’t enter because the venue was at capacity — yet two white men who arrived later were given first priority after two people left the building. That same night, INEZ, — who was performing — was told she couldn’t use a bathroom without paying a cover fee. She said it was only after finding a Black friend who worked at Spirit that INEZ was allowed into the bathroom.

In response to questions from a PublicSource reporter this summer, Spirit events manager and co-owner Leigh Yock said she hoped to address complaints of discrimination with the individuals directly involved and welcomed a related dialogue.

“Our intention is to always treat everyone equally and fairly. We truly care about creating an inclusive environment,” Yock said, underscoring their decision to participate in Blackout Tuesday.

Generally addressing security, she said extra security payment is standard for events with “a higher expected attendance” or “a younger demographic,” as well as “a dance party or live music event that takes place later in the evening.”

Yasha and INEZ shared their stories with us, the authors of this essay, not out of anger or bitterness, but rather to initiate a conversation about growth, reconciliation and justice.

Both acknowledge times of painful growth they’ve personally undergone to be more mindful in their speech and actions. If Pittsburgh venues are willing to make similar acknowledgements, INEZ said she is happy to “facilitate a conversation.”

“I don’t want people to just be shouting names out with no intention to hold people accountable,” INEZ said.

Black women uplifted her when she was at her lowest, INEZ said, and so she speaks to us out of the very same motive that adorns the shirt she wears on stage — “Protect Black Women.” Those who came before her paved the way for her, INEZ said, so she works to make sure “those who are here now and those who are yet to come can live in a city where we are granted equity, support, respect, safety and love.”

And until that day comes, she remains skeptical of token acknowledgements from some Pittsburgh businesses.

“How dare you say ‘Black Lives Matter,’” she said, “when you’re an establishment that doesn’t treat Black lives like they matter?”

Raghav Sharma is a writer and student from Cleveland, Ohio. You can find him on Twitter @breadpilled.

Markeea Hart is the co-host of Girls Running Shit, a local Pittsburgh podcast which provides a safe space and platform to showcase the talents, businesses, and events of other women/femmes and for seeing them flourish. She is also CRM marketing manager at a notable Pittsburgh company.