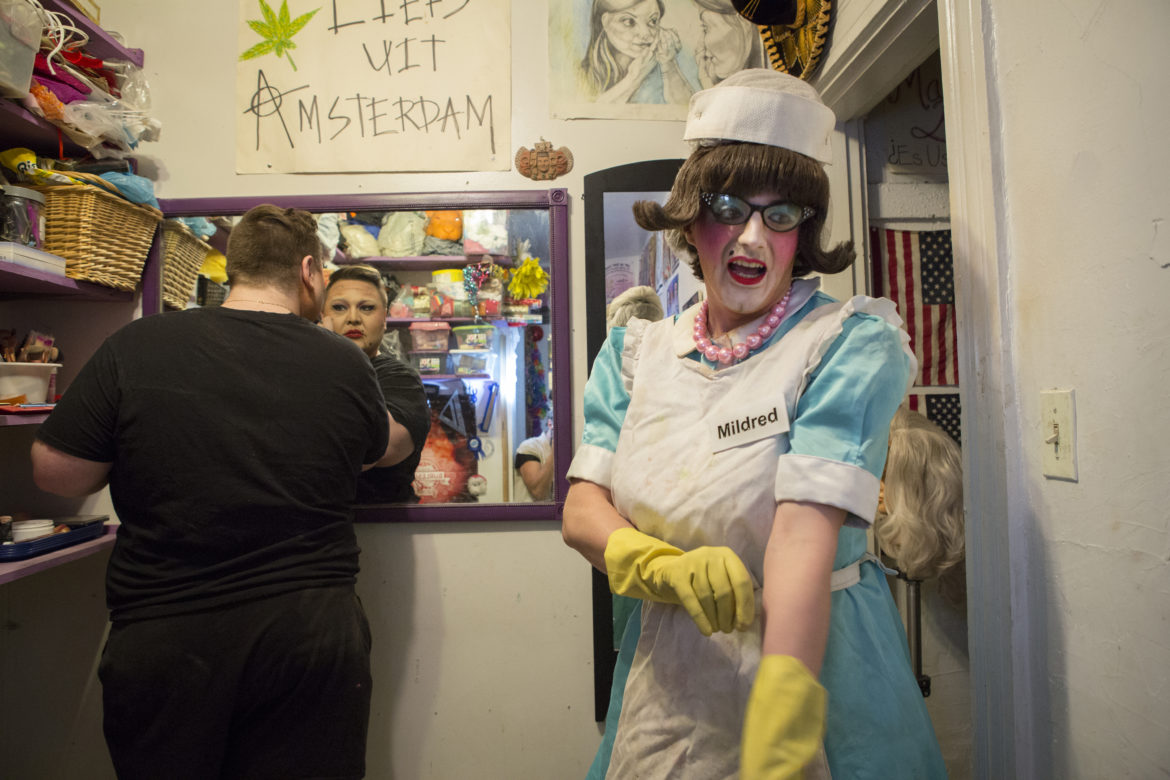 Alistair McQueen of Lawrenceville (front) as Mildred The Lunch Lady. McQueen had hoped to compete for a $15,000 prize in June at an event shuttered by COVID-19. McQueen planned to contribute prize money to Proud Haven. (Photo by Heather Mull/PublicSource)

If not for the pandemic shuttering in-person Pride celebrations this summer, McQueen – a 30-year-old out-of-work bartender from Lawrenceville – would have competed this month as Mildred at the Stoli Key West Cocktail Classic for a chance to win $15,000 for one of his favorite LGBTQ nonprofit organizations in Pittsburgh: Proud Haven.

The grand prize would have provided a much-needed financial boost. Had McQueen won, the $15,000 would have been equivalent to roughly 40% of the organization’s budget this year, which has been decimated by its COVID-19 response to the community.

Since the economic shutdown, Proud Haven and other LGBTQ organizations in Pittsburgh have seen a surge in need.

“The people who would help us are not able,” said Debbie Scotto, who in 2013 with her daughter founded Proud Haven, a volunteer-led organization that helps LGBTQ youth in Pittsburgh experiencing homelessness or housing insecurity.

“The cash has really grown a lot thinner.” 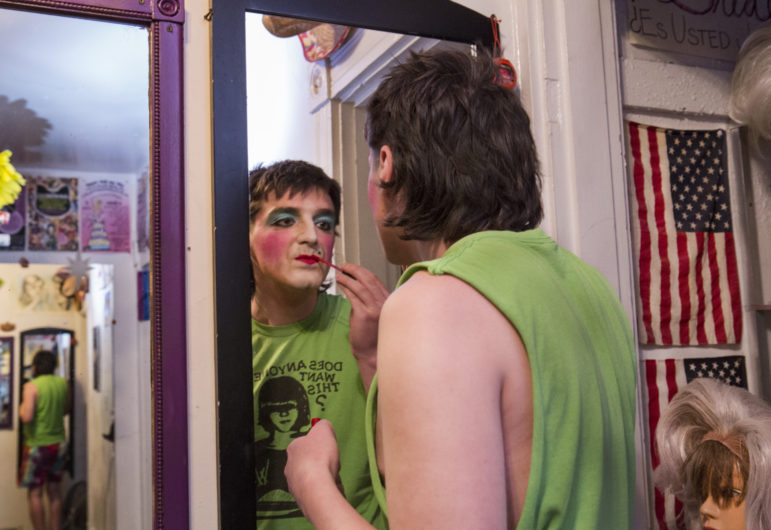 It takes Alistair McQueen only 20 minutes to transform into Mildred the Lunch Lady. (Photo by Heather Mull/PublicSource)

But the need for safe places has swelled. Brogan McGowan, a Proud Haven board member, said the number of LGBTQ youth needing emergency shelter has doubled in the pandemic – from 18 people needing help the first half of 2019 to 38 people needing emergency housing in 2020 to date. Since mid-March, the grassroots organization has spent roughly $25,000 of its $38,000 budget for the year, McGowan said.

With the pandemic having forced events to be rescheduled or canceled and the increased competition for scarce charity dollars, advocates worry about the sustainability of LGBTQ organizations that the community needs now more than ever.

“We’re already experiencing a difficult time,” McGowan said, noting the challenges the community has historically faced put LGBTQ people at a disadvantage heading into the pandemic.

“COVID has made it 10 times more difficult, for sure.”

Much remains unknown about the novel coronavirus, but one thing has become fairly clear in its wake: vulnerable communities before the pandemic struck are at a greater risk to its effects.

Roughly one in five LGBTQ workers nationally – according to an analysis by the Human Rights Campaign [HRC] Foundation – are employed in the service industry, which was devastated by the economic shutdown.

Data collection on the LGBTQ community has long been a challenge. The U.S. Census Bureau, for example, only began asking for demographic information about same-sex couples in its 2010 survey.

Concerned that the community may become invisible in the pandemic, HRC, one of the nation’s leading LGBTQ civil rights organizations, sought to examine the contagion’s effect.

“We did have huge concerns about the vulnerability of the community in the pandemic,” said Ty Cobb, HRC’s senior director of strategic initiatives and research.

“When you look at the impact the pandemic is having across the country, the data is telling us that people who are marginalized are experiencing the most severe consequences.” 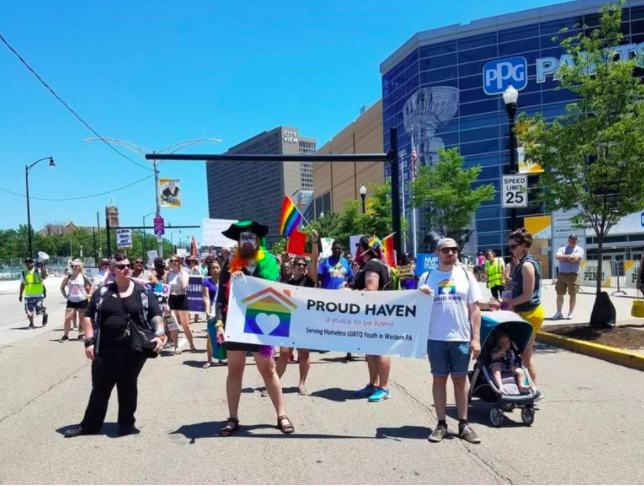 Data is important because it gives an issue scope, which, in turn, arms advocates as they seek funding.

“We’re kind of predicting it’s going to be worse because our community was already marginalized before the pandemic,” said Ciora Thomas, co-vice-chair of the Pennsylvania Commission on LGBTQ Affairs and founder of SisTers PGH, a transgender resource provider in Pittsburgh.

While donations have been strong, Thomas said, the organization had already shelled out about $30,000 for its annual People’s Pride event — now renamed People’s Pride PGH Presents: Black Trans Lives Matter, Too — which it will be unlikely to recoup with a virtual version in October.

“We’re really not going to be pulling anything in,” Thomas said. “It’s just not the same.” 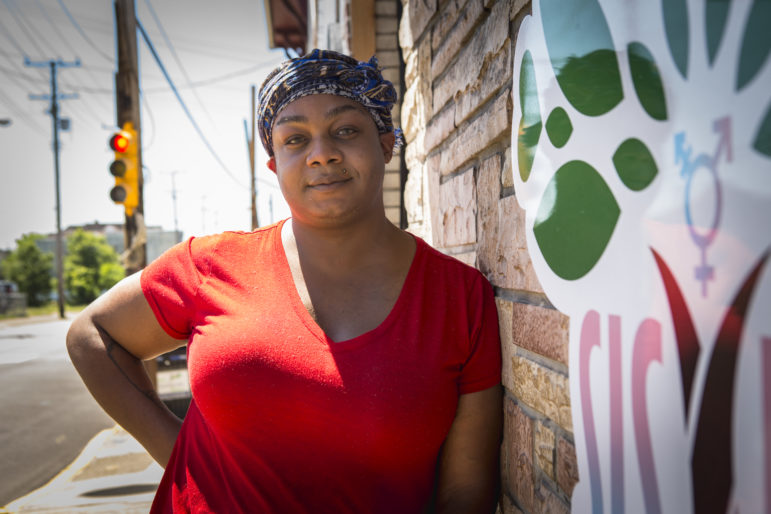 ‘A sense of urgency’

Drag performers have long played a crucial role in grassroots fundraising for the community.

“Mildred the Lunch Lady and other drag performers have been a large part of our fundraising, as have the Blue Moon, 5801 and There Ultra Lounge,” said Scotto, rattling off Pittsburgh gay bars that are fixtures in the LGBTQ community.

“Outside of a few grants, I would say drag performers are the largest donation group we have. I don't know where we would be without their support.”

The same is true for the Pittsburgh Equality Center, which has been dependent on OUTrageous Bingo, a monthly game of chance and drag performances that raise money for the LGBTQ community.

Karl Shaley, the center’s officer manager, estimates gay bingo brings in between $35,000 and $45,000 for his organization annually. Created in 1979, the Pittsburgh Equality Center functions as a LGBTQ referral organization, meaning they field inquiries and direct callers to the appropriate organizations that can help.

OUTrageous Bingo, which has raised money for the community for more than 20 years, canceled the remainder of the 2020 season.

Shaley said he would not be surprised if the return of OUTrageous Bingo was pushed back further.

This all comes as the center is experiencing its greatest call volume. Pre-pandemic, the center fielded about two dozen inquiries a month. Since mid-March, the number of calls has jumped to more than 100 monthly.

With only enough cash to keep the center open through the end of the year, Shaley said the unfolding crisis has been an impetus for the center to better define its mission and to seek out new partnerships and fundraising opportunities.

“I think it’s given us a sense of urgency and a new perspective on life,” Shaley said of the pandemic.

OUTrageous Bingo hasn’t been the only casualty.

Art for Change, an auction of donated artisan work benefiting the Persad Center, has been postponed until the fall. The Persad Center is a human services organization that advocates for the LGBTQ and HIV/AIDS communities through outreach, prevention, counseling and training.

Uncertainty over whether and when a second wave of coronavirus infections may strike has left the fate of the Art for Change event in doubt.

The auction, which has been held for more than three decades, typically raises about $250,000 and supports the organization’s food pantry, shower and laundry services for the homeless and counselor training. These services as well as Persad’s Safe Spaces, an afterschool youth drop-in program, were closed in the aftermath of the pandemic. 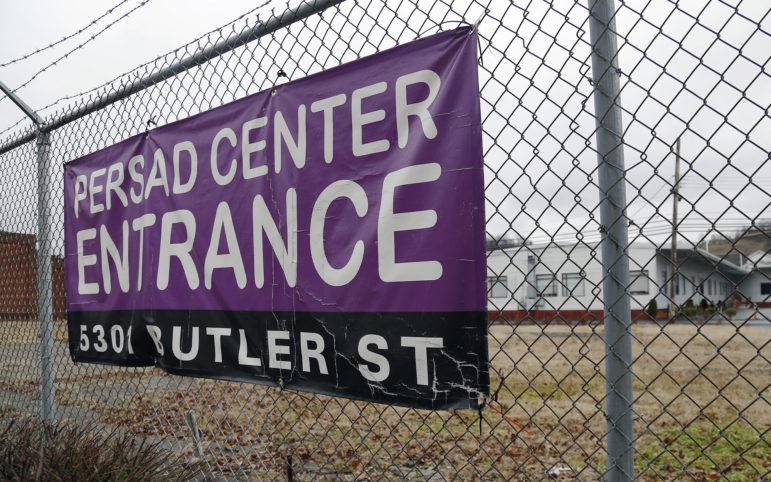 A sign indicates the entrance to the Persad Center in Lawrenceville. (Photo by Ryan Loew/PublicSource)

Persad – like most organizations – turned to telehealth and telemeetings to provide a critical lifeline. Pre-COVID, Persad’s counselors saw about 150 people a week. Now they see up to 200 in virtual settings.

“The bread and butter of who we are is providing a welcoming and affirming space,” said Carlos Torres, interim executive director of Persad. “Obviously with COVID-19, that’s challenging.”

For every $100 in grants awarded globally by governmental and multilateral agencies in 2017 and 2018, only 4 cents benefited LGBTQ communities, according to a Funders for LGBTQ Issues report on grantmaking, published in May.

The lack of sexual orientation and gender identity [SOGI] data could be detrimental for LGBTQ organizations seeking funding.

On May 13, the Wolf administration instructed the state’s five health organizations to begin collecting SOGI data from electronic health records. County and municipal health departments, including the Allegheny County Health Department, are also collecting this SOGI data. Pennsylvania Health Secretary Dr.  Rachel Levine said on June 5 that the state had not collected sufficient enough SOGI data to release to the public.

Sarah Rosso, executive director of the Hugh Lane Wellness Foundation in Pittsburgh, has estimated a potential budget loss of $100,000 as foundations pivot toward COVID-19 relief. And that could stymie growth for the fledgling organization, established in 2017 to address health and wellness in the LGBTQ community.

“If you don’t have the numbers then you don’t know what the impact is,” said Rosso, who is also a member of  the COVID-19 Equity Advisory Committee under Allegheny County’s departments of Health and Human Services.

“We know that morbidity and mortality data is going to be an uphill battle,” Rosso continued, referring to the difficulty to acquire data with the detail of whether patients identified as LGBTQ.

For all the challenges LGBTQ advocates foresee for the community in the weeks and months ahead, they also see a glimmer of hope.

“The only positive is our community is very resourceful and resilient and tough,” said Sue Kerr, founder and editor of Pittsburgh Lesbian Correspondents. “If anyone can find a way to figure it out and do this in a new and different way, I think we have a good chance.”