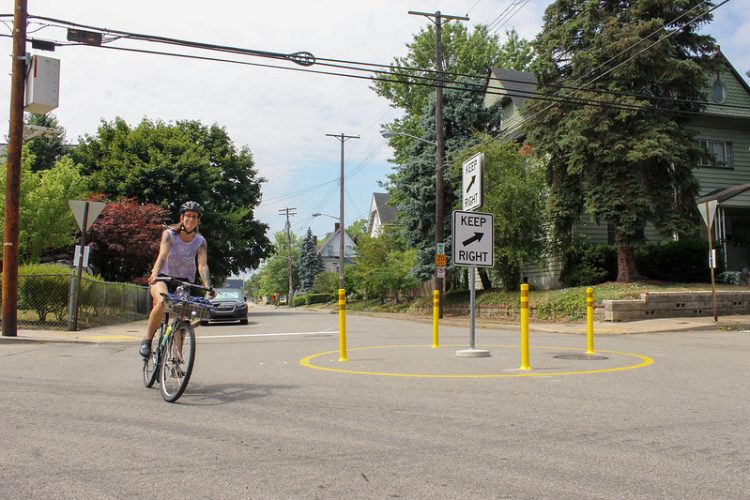 People have strong opinions about any new bike lanes in Pittsburgh. But there’s a new piece of bike infrastructure coming to the city, called the Neighborway, that seems like it will be an easier sell. For one, it doesn’t affect street parking. Secondly, it promotes traffic calming on residential streets.

“I talk to people all over the city, and everybody wants traffic calming,” says BikePGH Advocacy Director Eric Boerer. “It’s a pretty universal thing. People don’t like seeing cars flying past down their street.”

Neighborways are designed as vital connections in a citywide bike network, for streets located away from the main roads.

“In Pittsburgh, we have really narrow streets, and we need to be more creative than just sticking with bike lanes,” says Boerer.

“A lot of times, you might not need a bike lane, especially on a residential street that has residential parking. If you’re able to achieve the same result by just calming traffic and still providing a safe space for bicyclists to get around, it achieves the same thing.”

There’s no one-size-fits-all approach for a Neighborway, but they tend to have similar features. The most common is signage, letting you know that you are on a designated Neighborway.

“You’ll often see curb bump-outs (or extensions), which prevent cars from parking all the way to the intersection — which is illegal, but also reduces sight lines for cars coming from side streets,” says Boerer. “Some have speed humps. Some have mini traffic circles. Some have road markings, like shared lane markings on the street.”

The first completed Neighborway is in the South Side. It moves bike traffic off of busy East Carson Street by providing a path along the South Side Flats from 10th Street to SouthSide Works.

To make this happen, the city built a bike-friendly underpass beneath the Birmingham Bridge.

“Formerly when you got to 22nd Street, you’d have to turn right, go up to East Carson and cross that really dangerous intersection where the Birmingham Bridge meets Carson Street. Now, you just go straight underneath the bridge. It’s a pretty small but pretty important connection.”

Neighborway underpass beneath the Birmingham Bridge. Photo courtesy of the City of Pittsburgh.

Neighborhood traffic circles are another important Neighborway intervention. There’s one on North Euclid Avenue in the East Liberty/Highland Park area.

Should they become permanent, as planned, the mini traffic circles have some beautification options, like plantings or sculptures. This approach has proved popular elsewhere, particularly in Seattle, where there are thousands, notes Boerer.

So far, the South Side Neighborway seems to be working well.

“It definitely makes me feel more comfortable (as a bicyclist),” says Boerer. “Cars can still get through. People just have to drive a little slower because of the speed humps.”

The city is also implementing a program called MoveForwardPGH, with a goal of rapid implementation of the Bike(+) Master Plan, a 10-year roadmap for remaking local roads in a way that allows bicycles, cars and other transit options to safely share space.

Other Neighborways in the planning phase include ones for Central Lawrenceville, East Liberty/Highland Park, Point Breeze, Bloomfield/Friendship, Manchester and North Oakland/Polish Hill.