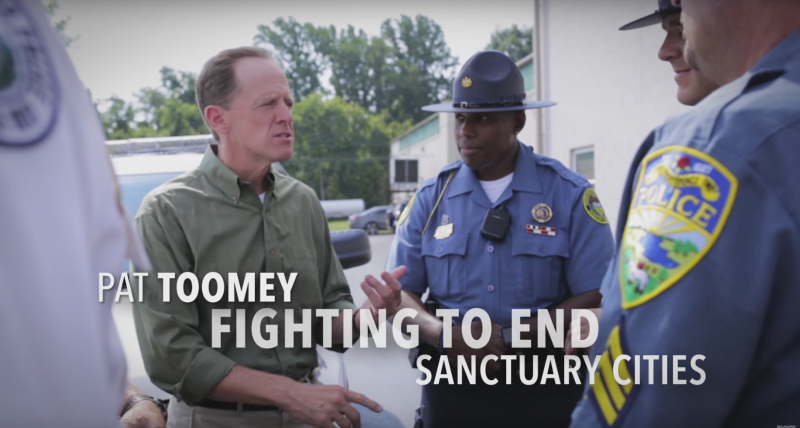 Pittsburgh may be taking a step toward becoming a sanctuary city and, in doing so, the city would be stepping directly into the crosshairs of the next President of the United States.

One of President-elect Donald Trump’s campaign promises was to cut off federal funding from so-called sanctuary cities, where local authorities are prohibited from investigating individuals solely for possible immigration law violations.

The Pittsburgh City Council has never passed a law making it a sanctuary city, but since 2014, city police have been operating almost as if it had.

“The Pittsburgh Bureau of Police practice is to honor requests from Immigration and Customs Enforcement (ICE) to detain those wanted in criminal investigations, but to refrain from working as immigration officers,” said Timothy McNulty, spokesperson for Mayor Bill Peduto. “In other words, the PBP does not engage in investigatory detention of individuals based on their immigration status.”

A source within the city government, who asked to remain anonymous, said City Council members are looking into formalizing such a policy.

If it becomes official, Pittsburgh would be joining the likes of Philadelphia, New York City, Detroit, Baltimore and Portland, among other cities and towns. As a sanctuary city, Pittsburgh could also be among those facing sanctions from Trump, and even the state of Pennsylvania.

House Bill No. 1885, sponsored by state Rep. Martina White, R‑Philadelphia, would put criminal and economic sanctions on the state’s sanctuary cities. Last month, the bill sailed through the state House, 136 to 55. Following Republican gains last election, it could overcome a veto by Democratic Gov. Tom Wolf.

Even as the undocumented immigrant population in the United States fell, Pennsylvania’s rose, from about 140,000 in 2009 to about 180,000 in 2014, according to the Pew Research Center. The Trump election has scared Pittsburgh’s population of undocumented immigrants. Some have already experienced being detained after minor citations, like driving without a license. The practice has broken up families and threatens to separate children from their parents. The policies around sanctuary cities will define how undocumented immigrants interact with the local police.

Lucy Gillespie of Garfield coordinated with the Thomas Merton Center to start a petition on Change.org, supported by 1,812 people so far, to make Pittsburgh a sanctuary city. Immigration, Gillespie said, “isn’t a local issue or at least it shouldn’t be, and you have people’s lives and families at stake.”

Erin Starks Teeter of Point Breeze digitally signed the petition. She doesn’t think Trump will actually put economic penalties on sanctuary cities, due to the number and size of them. “He’d have to go after his own city,” says Starks Teeter, referring to Trump’s lifelong home of New York City. “I’m calling his bluff.” But she wants Pittsburgh to be in that fight if it happens.

A bump on Pittsburgh’s road to becoming a sanctuary city is the county’s control over the local jail system. Unlike Pittsburgh police, the Allegheny County Bureau of Corrections does check immigration status of anyone detained, just like they check for outstanding warrants, according to Amie Downs, director of communications for Allegheny County.

The 2012 Supreme Court case Arizona v. United States limited the ability of states and municipalities to crack down on immigration status violations independently, says Sara Rose, staff attorney of the American Civil Liberties Union of Pennsylvania. Local police can’t detain people solely on suspicion of violating immigration laws, but they can still notify the federal agency, ICE, if they suspect a person is in violation.

Sanctuary city laws limit local police’s cooperation with the feds. Supporters say these laws ease the relationship between police and immigrant communities, which might be targeted by criminals who would otherwise exploit their hesitance to go to police for fear of being detained on an immigration violation. “Some cities go further than others” says Rose, from not communicating with ICE at all to ignoring the agency’s “detainer” requests.

These detainers are not signed by a judge, making them a legally dubious as a reason for jailing someone, says Rose. Allegheny County softened its approach to immigration after Angelica Davila, a U.S. citizen born in Mexico, sued after spending the night in jail solely because ICE issued a detainer to check her immigration status. After the ACLU helped Davila win a $25,000 judgement in 2012, county jailers stopped holding people on ICE detainers, but they do notify the agency of potential immigration law violations.

Some correlate sanctuary cities to increased crime, but there is little evidence to substantiate that notion. A Washington Post analysis found no significant crime increases in places that, since 2002, have passed “sanctuary” laws. Still, critics point to the potential security threat of such policies — an argument made across television screens in Pennsylvania during the ad blitz of last election.

When asked if the victorious Toomey will now seek to sanction cities in his state, the senator’s communications director, E.R. Anderson, said, “Senator Toomey will continue to be a leader on this issue. I am not sure yet the tactics of that leadership.”

Anderson defines the issue as an effort at “keeping violent criminals, who also are here illegally, off the streets.”

Clarification: The previous version of the article mischaracterized Lucy Gillespie's involvement with the Thomas Merton Center.