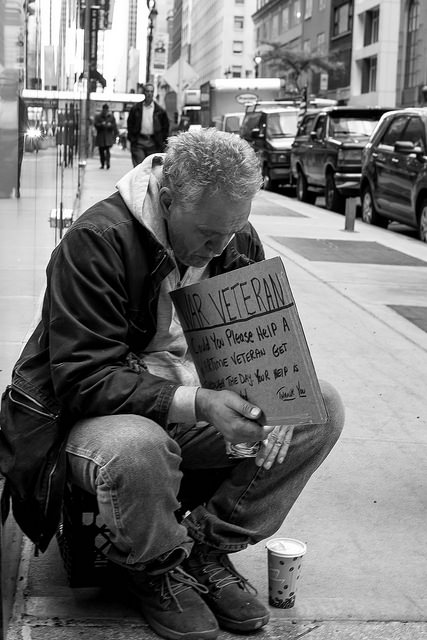 A year and a half ago, Pittsburgh Mayor Bill Peduto set a goal to eliminate veteran homelessness in the city by the end of 2015.

That time is now. So how much progress has been made?

In May 2014, the city had counted 484 military veterans who needed housing and they planned to provide it.

As of December, the city is 34 veterans away from its goal, according to Peduto Spokesman Timothy McNulty, and the remaining “shouldn’t take long.”

“Given how that number is going to go to zero, the next phase is to come up with a recurring system constantly finding homeless veterans,” McNulty told PublicSource.

According to a PublicSource report in November, the U.S. Department of Veterans Affairs describes homelessness “loosely.”

“It doesn’t always mean people living in a cardboard box,” said Lauren Broyles, a research health scientist at the VA’s Center for Health Equity Research and Promotion (CHERP). “It could be couchsurfers, people living in subsidized housing about to be evicted.”

Pittsburgh is just one of many who accepted the national challenge to end veteran homelessness in the United States, and other cities have also had success.

Gov. Tom Wolf and department officials pledged to help statewide, setting a goal of housing 550 homeless veterans in the last 100 days of the year. By late November, 481 veterans were placed in permanent housing, according to a report by PublicSource news partner WESA.

Along with Wolf and Peduto, Philadelphia Mayor Michael Nutter previously accepted the national challenge by President Barack Obama to end veteran homelessness, and the efforts have paid off.

According to the Philadelphia Inquirer, Nutter announced this month that homelessness for veterans in the city was “effectively ended.” He said that means every veteran who wants housing has received it; about 15 had declined housing.

According to HUD, veteran homelessness has decreased 33 percent nationally, and about 15 municipalities have reached the "functional zero" goal, including large cities such as Houston and smaller communities like Troy, N.Y.

Virginia declared it was at functional zero last month, on Veterans Day. Philadelphia officials had pledged to meet the same goal, but came in about five weeks behind.

The fight to end homelessness among veterans was not just a yearlong effort. The persistent issue will continue to be a problem in 2016.

Chip Gilliland, department chief of reintegration and outreach, told WESA that the federal Veterans Affairs plans to focus their attention on chronic homelessness.

“The key to getting a veteran housed is ... providing those wraparound services to help them get through whatever they’re going through,” Gilliland said.