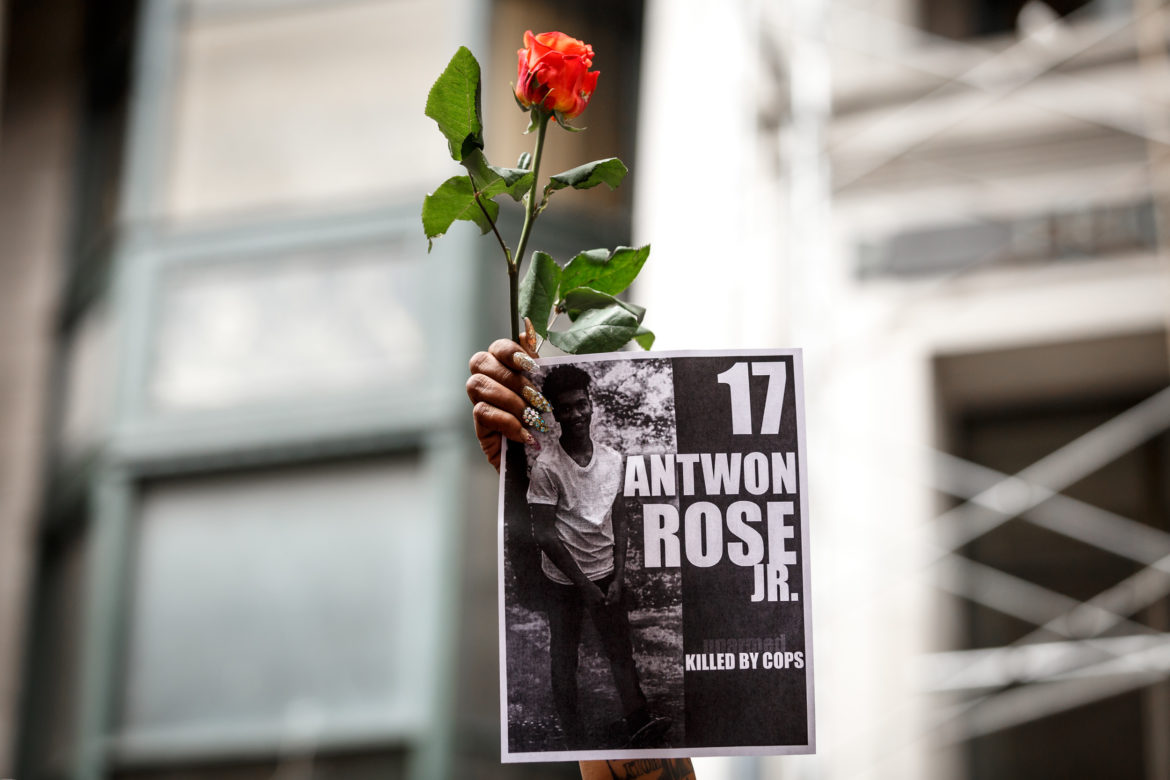 An image from a June 21 protest in honor of Antwon Rose II. (Photo by Maranie Rae Staab/PublicSource)

Vanessa German, a visual and performance artist based in Pittsburgh, has written three poems addressed to Antwon Rose II this week during the trial of former East Pittsburgh police officer Michael Rosfeld who fatally shot the teenager on June 19.

Rosfeld is facing one count of criminal homicide. As of noon March 22, the defense had rested its case and closing arguments were set to take place in the afternoon.

here is a boy who should be dancing.

here is a boy who should be up in the morning making his mother laugh, eye shine reflecting the sky, a sigh in his chest leaning into the wind of the day with a sweet ache to own the horizon in his wing span.

here is a boy who should be showing off his teeth in the noon day sun, causing alla the Braddock church ladies to swoon when he walks into the room, admiring his sweetness and his biceps and his easy willingness to carry boxes to and from the freestore. he should be having pizza for lunch.

he should be falling in love with a girl who laughs silly at his jokes. he should be finding things out about what it means to be emotionally available and Black, at the same time.

he should be applying for summer internships and downloading time management apps.

he should be growing out of last year’s t-shirts and drinking milk straight from the carton.

he should be telling his own stories, writing more poems and taking selfies against the legs of his favorite roller coasters.

he should be telling his own stories.

he should be telling his own story.

he should spoken about in present tense.

he should be telling his own story. 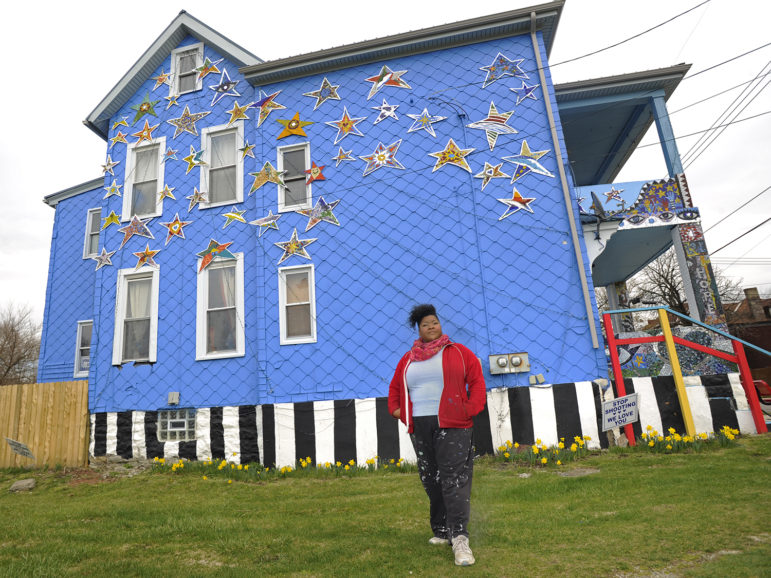 Artist Vanessa German in Homewood in 2016. (Photo by Connor Mulvaney/PublicSource)

it is the second day of the trial.

the city is holding its breath and I saw your mama in the newspaper yesterday. she was holding her breath, too. lots of police down there. they say that it is a real. show of force. all of those uniforms. all of that blue. and white. pressed up against the bands of the day. squaring jaws. squaring shoulders. straightening the epaulets. shoes shiny as tears. people are frightened and tight in the mouth. everyone is waiting for something to.give.

i try not to, but, i do, imagine you running. i try not to imagine your arms pumping.your heart jumping over its own face.kicking past its own rhythm. out doing itself to heave you past the edge of the brick building.out of the sightline. oh god.and i know how loud the boom and the bang is. i know how it comes down from out of the sky and cracks the air in half. no apologies. i try to not imagine. how scared you were. running.

that one attorney said to the jury. can you even. imagine how hard this work is? this job of policing? he said that it can be so. frightening. and i imagine the jury bobbing their heads in agreement, scenes of law and order flip-booking behind their eyes.yes. they are agreeing. it is so. frightening.

we know about being scared.

we know about running.

we have 7 million shoulders to look over.

we know about running.

we know about. Escape.

they don’t want to know what we know about Fright.

they cannot even imagine the songs that we sing, everyday.

they cannot imagine what you saw, to even reach for,

to even try for

here is a song that i know.

[Following the second day of the trial.]

it iz the third day of the trial.

the man whose hands and *service weapon* ended your lungs, told the world today, that he did it for us. he told the world, that he shot *You*, for *Us* for the people. for the.*community.* he said, that he shot you, for us. ::::::::::::::::::oh. the day is upside down today. the truth iz in a rock. all over America today, breastbones cracked. everywhere that there iz air and sight, the *community* trembled.

well, Antwon, on a lighter note,

we were captured by a hummingbird today

it waz eating in the bushes and it caught us. still.

on the way home from the art gallery. it was a miraculous

neon electric explosion of lizard green and wing of light.

a dazzling corona of blur. hovering there. back and forth into the sweet open faces of this flowering plant that I am pretty sure does not bloom in pittsburgh, where near we are from, where you lived, there are/were not very many hummingbirds

so i stood there and i took the sight of this one in for you.

i said to myself: how many hummingbirds was Antwon able to see in the few adventures of his short, brilliant life? was he ever captured, still, by the dance of a hungry, thirsty hummingbird?

how many times did the earth take his breath away

with its beauty holding him rocking in awe, in a moment of capture— Air Jordans and laughter and then, just then, there from the corner of his eye, a sight for the ages, a story to regale to his mama: a dripping and sinuous swarm of honey-drunk bees, clinging to the rear-view mirror of a parked car. buzzing and alive and languid AZ mid-afternoon heat waves in Tucson. had Antwon ever been to Tucson? how many times did the earth cause him to.catch his breath and linger into a sigh, captured loose, on his way home from school, how many times did he come upon the electric blue body of of a slithering dragon snake, or, a hollowed out place in a tree and a nest of brand new nappy-feathered owlets in their tiny, courageous fluff and round wonderstruck eyes; new to wings, new to the crackling cacophony of city jazz, new to the faces of curious Black boys holding the beat of their own heart’s, still, in this come-upon moment of beauty that is seeing a new earth thing, for the first time.

did you get enuf hummingbirds, Antwon?

what about ocean and high tide and the roar and crash of saltwater into moody, rocky shoreline? in your 17 years, where were you with your sight of horses and the sound of their hooves breaking thunder against the wracking dust of the running path— had you had your fill of these sights? and so, then, what of love, Antwon? were you ready to be done with love and loving and moments of forgiveness fought for over long nights of conversation, upturned truth and revelation of heart and soul— had you had your fill?

i hope that they ask these questions in the court tomorrow.

i hope that even the judge is rendered silent and still with awe at the enduring, wracking, horror of all that was executed in your execution.

i hope that there iz no dry eye in the place.

[Following the third day of the trial.]