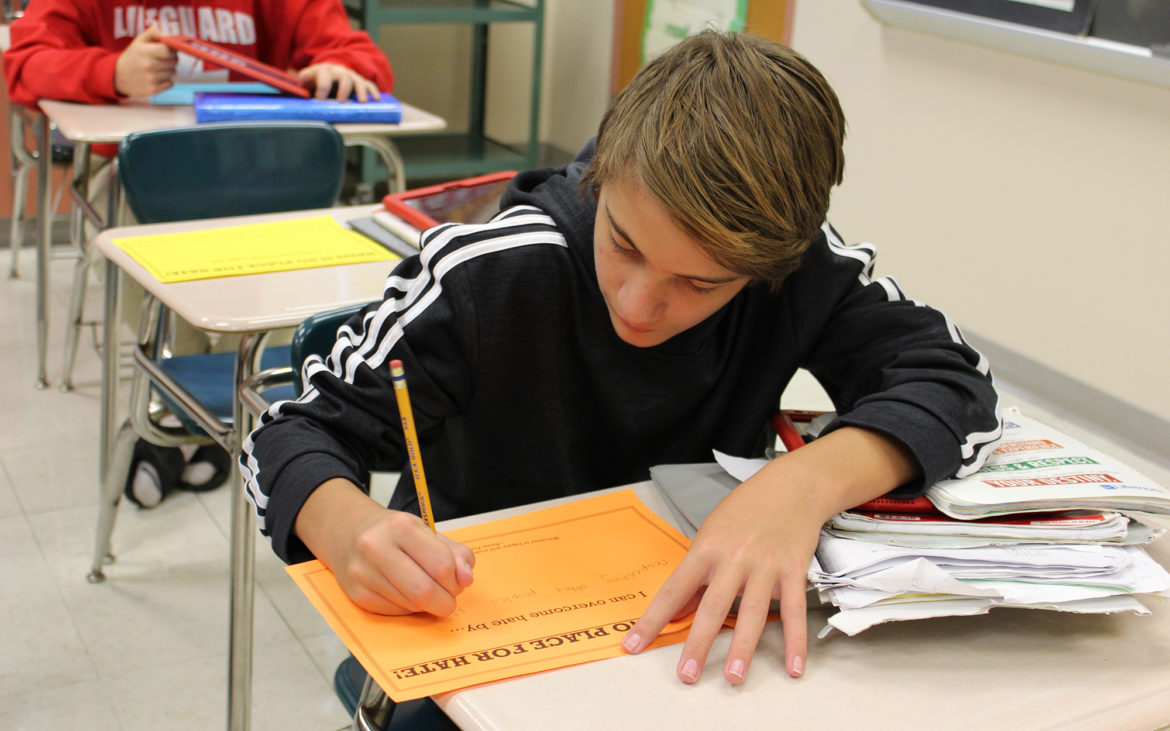 Eighth-grade students at North Hills Middle School, Jewish or not, had a personal connection to the deadly shootings of 11 Jewish worshippers at the Tree of Life Synagogue on Saturday.

One of the victims, Dr. Richard Gottfried, was a popular dentist from Ross Township who served many of their families.

On Monday, the students, who were studying the Holocaust prior to this weekend’s assault on Squirrel Hill’s Jewish community, penned positive messages promoting tolerance and rejecting discrimination.

“Accepting people for who they are and not judging them for what they believe, what they look like or how they act.”

“Never give up on helping and caring for different people.”

“Having an open mind about EVERYONE and EVERYTHING.”

The exercise was one of the ways that students and staff got through their first day of school in area districts after a weekend with round-the-clock news coverage of a mass shooting in a Pittsburgh synagogue.

A number of school district superintendents across Allegheny County posted messages of condolences on district websites, sent email blasts letting families know that counselors were available and outlining resources for helping children with anxiety in the shooting’s aftermath.

Some district used the event to remind students and staff of safety practices and drills they’ve rehearsed in the event of such an emergency at school.

As in North Hills, students at Allderdice High School felt the tragedy hitting close to home. The Tree of Life Congregation is blocks from the school and many students and staff live in Squirrel Hill. 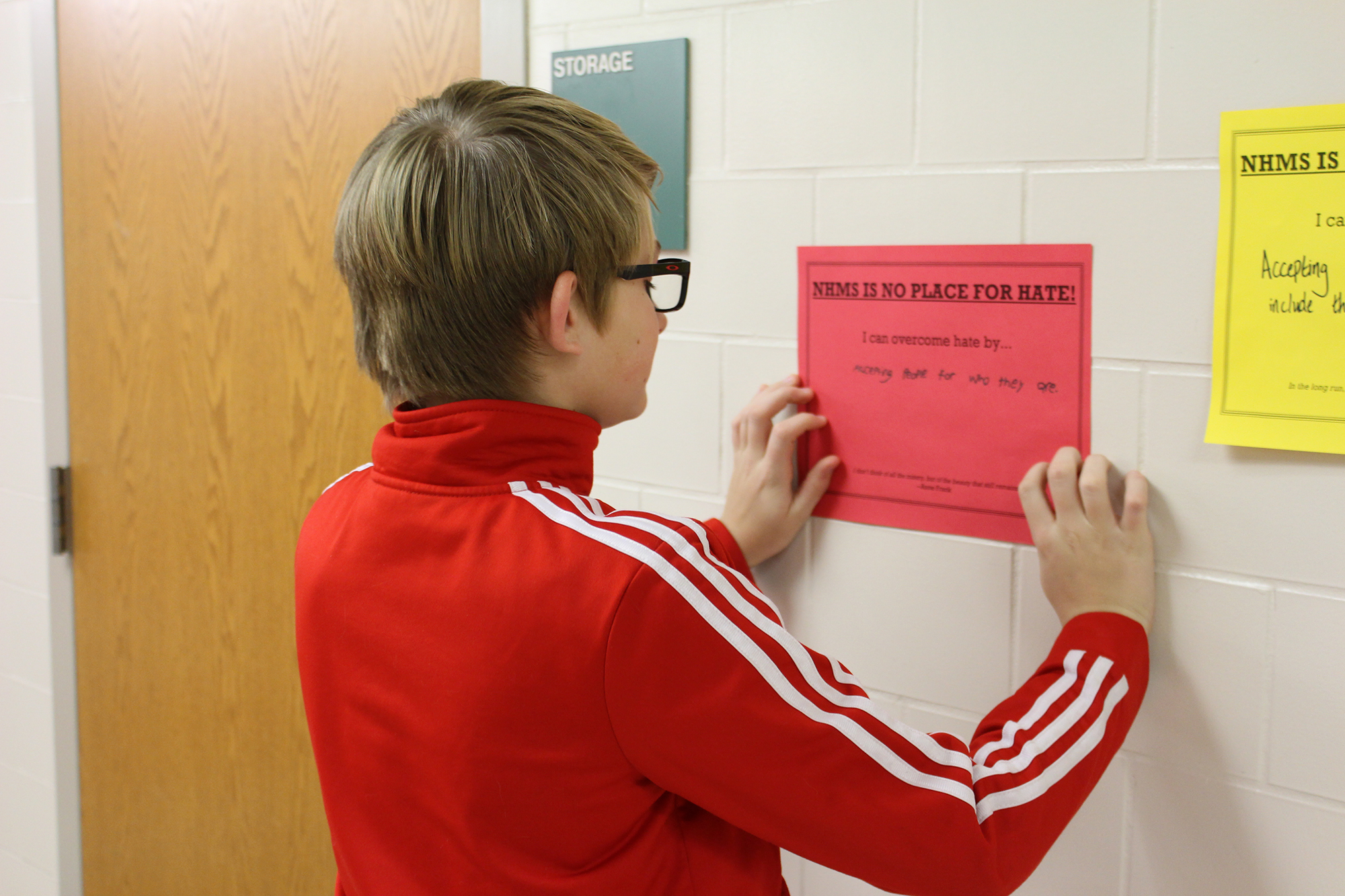 In the Baldwin-Whitehall School District, students and staff were grappling with the fact that the accused gunman lived about a quarter mile from McAnnulty Elementary, which houses grades K-1.

“He probably drove by that school every day,” said Baldwin-Whitehall Superintendent Randal Lutz.

Lutz said the district re-posted a video about ALICE (Alert, Lockdown, Inform, Counter, Evacuate) training and a statement about vigilance and sticking to safety protocols. “This was a perfect opportunity to revisit those things,” the superintendent said.

At Allderdice and Baldwin-Whitehall, administrators decided not to bring the shootings up as part of class discussions, but announced to students that counselors were on hand if they needed to talk.

“Accepting people for who they are and not judging them for what they believe, what they look like or how they act.”

The district placed an armed Pittsburgh police officer in front of Allderdice on Monday. “I think that was to give them a sense of security after such a great tragedy,” McCoy said.

Mary Margaret Kerr, a professor of psychology in education and psychiatry at the University of Pittsburgh, said she was busy over the weekend helping districts prepare lists of resources for parents to help their children with anxieties over the shootings.

Among the first districts to contact her was Mt. Lebanon, where there are two nearby Jewish houses of worship — Temple Emanuel and Beth El Congregation. The Mt. Lebanon district held a moment of silence at the start of the day on Monday and posted these resources for parents to help their children.

Kerr referred districts and parents to the National Child Traumatic Stress Network for guidance on how to address the mass shooting with children in different age groups.

Quaker Valley Superintendent Tammy Andreyko sent a letter to her community expressing sorrow to the Pittsburgh Jewish community and reaffirming her district strives for an inclusive environment.

“No one should feel vulnerable to bigotry and hate,” Andreyko wrote.

The Pittsburgh Federation of Teachers [PFT] issued a statement that called upon government leaders “at all levels to to enact gun laws that make common sense by returning reason and compromise to our national debate.” 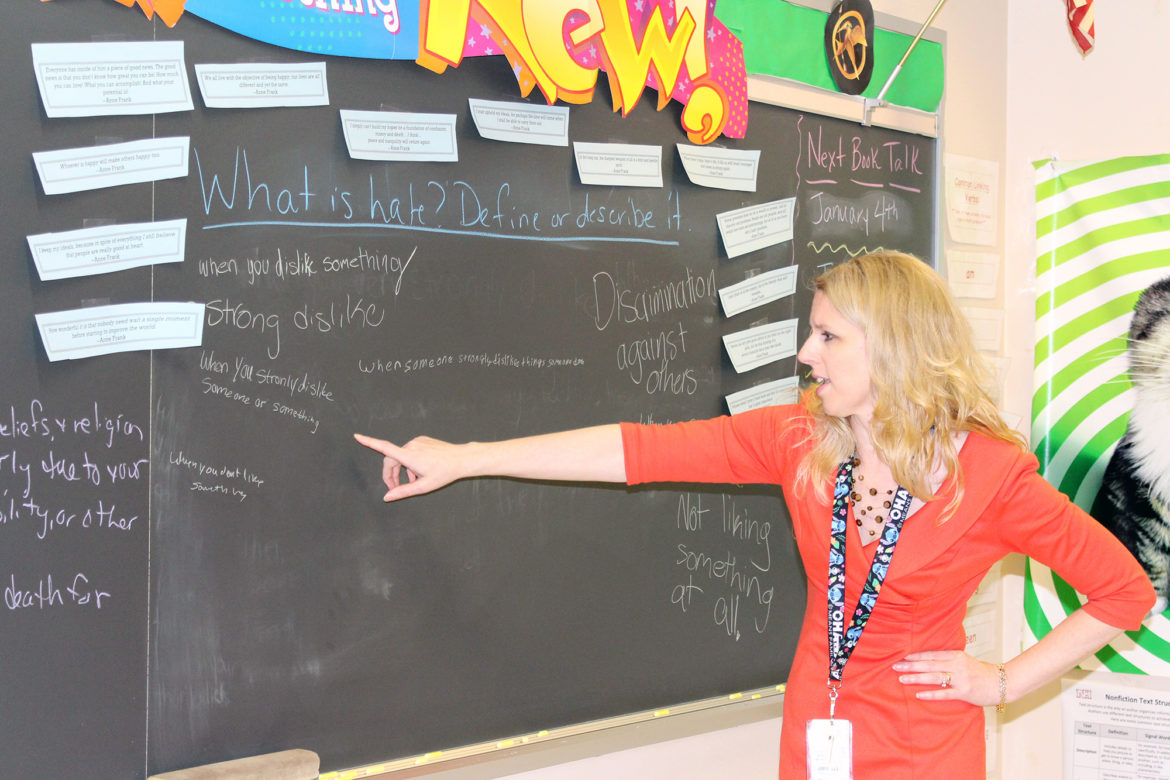 The teacher was teaching a lesson on the Holocaust prior to Saturday's shooting at Tree of Life synagogue. (Courtesy of North Hills School District)

Last week, the Pittsburgh Public Schools board voted against arming its school police. PFT, which represents school police officers, supported the proposal to arm them.

The PFT statement also encouraged teachers to “continue to educate without hate so future generations can lead the way in creating a more perfect union and a better world — one that does not, and will not ever, tolerate violence as a means to an end.”

Pennsylvania State Education Association President Dolores McCracken issued a statement saying teachers in her union will work to make sure students know that adults in their schools are working daily to keep them safe.

“There is no place for hate anywhere in our society,” McCracken said. “Educators and support professionals across the state will stand together to send that message today tomorrow and always.”