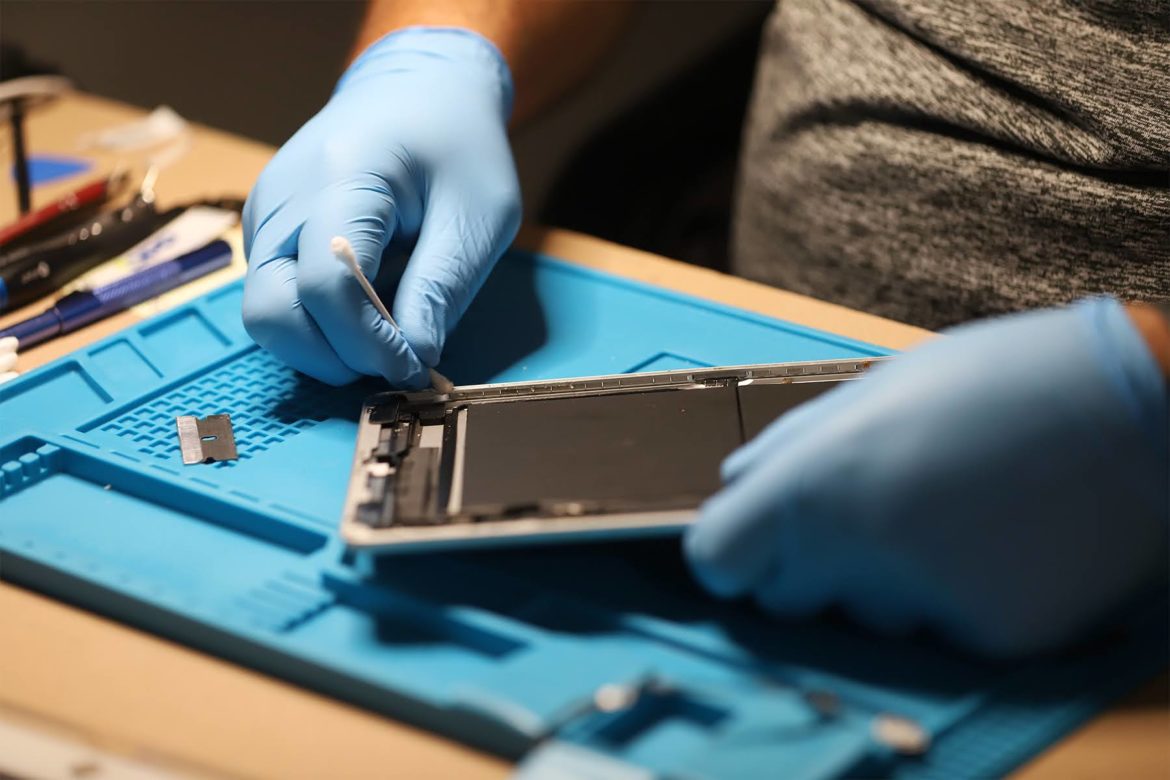 Josh Turkovich, owner of Mon Valley Phone Repair in Monessen, repairs an iPad in his shop. (Photo by Ryan Loew/PublicSource)

For Rob Oliver, personal medical equipment means the difference between living life freely and being confined to his bed.

When he needed to attach a new footrest to his shower chair, Oliver, a Pittsburgh native who is paralyzed from the chest down, reached out to the manufacturer to order a replacement part. While the component only cost a few dollars, the manufacturer refused to sell it to him, instead suggesting he purchase a new unit for upward of $1,500.

For now, he’s stuck with a nail holding the footrest in place. Oliver said it’s not the only instance in which a manufacturer refused to sell him parts or allow his attendants and family members to make what he sees as easy repairs.

“We just can't get it to happen because you can't get the parts,” Oliver said. “I'm especially disappointed when you have a vendor who has that level of underestimation of what people with disabilities are capable of.”

Stories like Oliver’s are at the center of the push for what’s called “right to repair” legislation. Proposed laws like one in the Pennsylvania House of Representatives would require companies to make available to consumers the parts, tools and knowledge to repair their products, which many manufacturers keep out of reach.

The right to repair movement unites farmers, small business owners, people with disabilities, hospital chains, consumer rights groups and lawmakers from both sides of the aisle. It faces opposition from manufacturers of consumer electronics, medical hardware and farming equipment who want to retain control of repairs, citing concerns about intellectual property and safety.

No state has passed broad right to repair legislation, though Pennsylvania is one of at least 25 states to consider it this year. The efforts could affect everything from the price of medical bills to the amount of electronic waste to how much you’ll pay the next time you shatter your phone screen.

The right to repair

Josh Turkovich has been repairing phones for nearly a decade.

He’s operated Mon Valley Phone Repair since 2012, offering quicker and cheaper repairs than manufacturers like Apple and Samsung. At the same time, manufacturers have built barriers into their hardware that make it more difficult for third-party shops to make repairs.

Some manufacturers build phones with parts they don’t individually sell or create special components that need company-specific tools to access. And worst of all for Turkovich, they keep schematics and repair manuals secret.

“We could serve in such a greater capacity if we had schematics, if we had access to parts and manuals and things like that — everything the right to repair would open us up to,” Turkovich said.

Manufacturers and tech industry-backed lobbying groups contend it’s their right to decide who services their products and how and that right to repair legislation would be harmful.

“Allowing unvetted third parties with access to sensitive diagnostic information, software, tools and parts would jeopardize the safety of consumers’ devices,” said David Edmonson, vice president of state policy and government relations for lobbying group TechNet, in a statement to PublicSource. TechNet is backed by companies including Apple, Google and Facebook.

But critics like Adam Wolf, president of the National Wireless Independent Dealer Association, say their behavior borders on a monopoly — allowing manufacturers to block out competition that could cut into their profits. And the extra steps necessary to get around these barriers can be time-consuming and costly for consumers and repair shops alike.

“When you’re the only guy in town, you can literally charge whatever you want,” Wolf said.

Past and present legislation introduced in Pennsylvania has sought to change that dynamic. 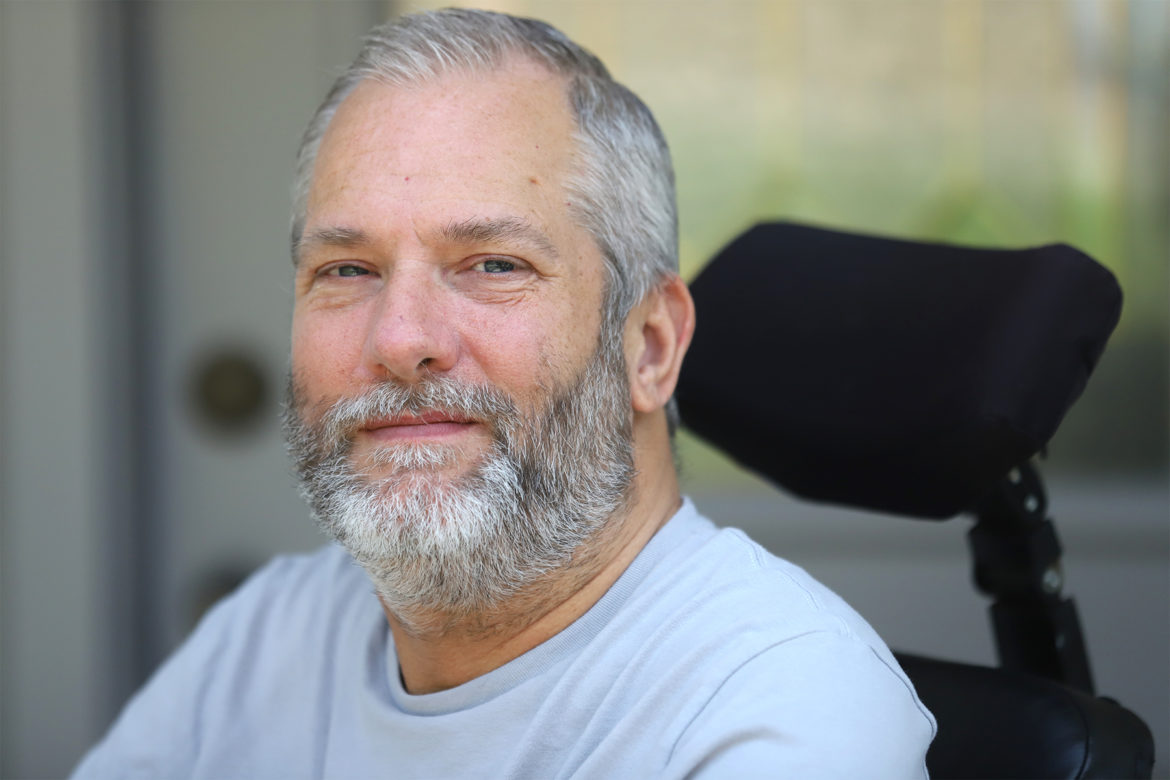 Rob Oliver photographed outside his home in White Oak. (Photo by Ryan Loew/PublicSource)

Rep. Austin Davis, D-McKeesport, introduced a right to repair bill in the Pennsylvania House of Representatives in April 2020. The legislation never made it out of committee, which lawmakers attributed to time constraints imposed by the pandemic. Davis also speculated Republicans may not have prioritized advancing a Democrat-proposed bill.

But with new bipartisan legislation introduced in the House of Representatives and forthcoming legislation in the Senate, the statehouse is gearing up for a deeper look.

The new house bill was introduced by Rep. Russ Diamond, R-Lebanon, and co-sponsored by Davis and other Democrats. Like other right to repair bills, it requires manufacturers to make available on “fair and reasonable terms, any documentation, part or tool” needed to repair devices they sell. Those rules would apply to any product that relies “in whole or in part” on digital electronics embedded in or attached to the product to function, and violations would fall under the Unfair Trade Practices and Consumer Protection Law.

The bipartisanship surrounding the issue stems from the intersection of different industries and policy goals, state Rep. Jessica Benham, D-Pittsburgh, said. Benham views the legislation as a means of cutting down electronic waste and advancing the rights of Pennsylvanians with disabilities.

The legislation would also make it easier for Pennsylvanians to crack open and repair their own devices. 2018 data from iFixit, a popular online repository of user-contributed schematics and repair guides, shows that 2.3 million Pennsylvanians visited the site in a given year, illustrating demand for self-service repairs in the state.

As products like phones and laptops become more essential, and new industries become digitized, that need is set to grow.

“If you own something, it should be up to you how as to where and how you get it serviced and repaired,” said state Sen. Camera Bartolotta, R–Monongahela, who has voiced support for a right to repair co-sponsorship memo in the Senate.

Companies and manufacturer-backed lobbying groups have successfully pushed back against right to repair legislation in the past, including a recent effort in Colorado. Manufacturers argue the legislation would create cybersecurity threats, violate intellectual property rights and would be dangerous for everyday consumers who companies say aren’t equipped to service complex hardware.

Some manufacturers also say that the limited tools and schematics they make available — as well as partnerships with certified repair shops — provide a balance of consumer freedom and security.

A recent Federal Trade Commission report criticized many claims manufacturers make against the right to repair as lacking evidence, including those regarding consumer safety and cybersecurity. President Joe Biden issued an executive order on July 9 calling on the FTC to create right to repair rules, and the commission has voted to pursue plans to evaluate repair restrictions for possible breaches of antitrust and anti-competition laws.

Even with federal action, more targeted state-level legislation may remain the most effective way of advancing the right to repair, advocates like Wolf said.

In farming, quickly repairing equipment is essential, said Liam Migdail, director of communications for the Pennsylvania Farm Bureau, which has advocated for the right to repair in Pennsylvania.

With strict timetables and long distances between dealerships, farmers traditionally have made their own repairs. But the digitization of farming has made that more difficult, said Tommy Nagle, a farmer and rancher based in Cambria County.

Even though farmers own their tractors, they don’t control the software that makes them run. So while farmers can often order and replace any part they need to, in many cases the tractor’s software won’t recognize it until a company technician comes out to make the necessary adjustments.

“You have basically a half a million-dollar, quarter-million-dollar piece of equipment that’s dead, and there’s nothing you can do about it.”

But the process can inflate the price of repairs and extend wait times by several days, Nagle said.

“You’re basically looking at, for lack of a better term, a brick,” he said. “You have basically a half a million-dollar, quarter-million-dollar piece of equipment that’s dead, and there’s nothing you can do about it.”

Pennsylvania’s right to repair legislation would force manufacturers to disclose those “digital keys,” allowing farmers to make the adjustments themselves. Industry advocates, like Joshua Evans, vice president of government relations for the Equipment Dealers Association, argue that legislators shouldn’t be addressing tractors and industrial equipment in the same terms as smartphones and laptops, which are vastly different.

The added cost of manufacturer-imposed repair barriers can be thousands of dollars for farming equipment, according to Nagle. In the medical industry, where manufacturers have broad authority to set prices for parts and branded training for biomedical technicians, the cost of repairs can exceed tens of thousands, said Patrick Flaherty, vice president of UPMC's BioTronics divisions, which oversees repairs for the hospital chain.

Those higher prices, according to Flaherty, can add to patient expenses.

In some areas where UPMC’s technicians could make repairs and in turn reduce operating costs, they’re prevented from doing so by the suppliers, he said. “Generally speaking, the patient is the downstream recipient of that.”

Restrictions on medical equipment repairs helped elevate the issue to the Pennsylvania statehouse last year. Davis said he introduced his right to repair bill last year in part to prevent repair restrictions that could have contributed to a shortage of ventilators. Flaherty noted UPMC was able to avoid these shortages.

UPMC’s bargaining power has enabled the healthcare giant to negotiate access to repair tools for a substantial portion, but not all, of the hospital chain’s hardware. Rural and smaller hospital chains don’t have those same privileges, he said, nor do consumers like Oliver who own their own equipment.

How the right to repair could reshape the economy

If Pennsylvania were to pass right to repair legislation this session, the impact could echo across the country.

This has happened before. In the automotive industry, a 2012 referendum on right to repair legislation in Massachusetts compelled industry leaders and manufacturers to reshape their policies nationwide. 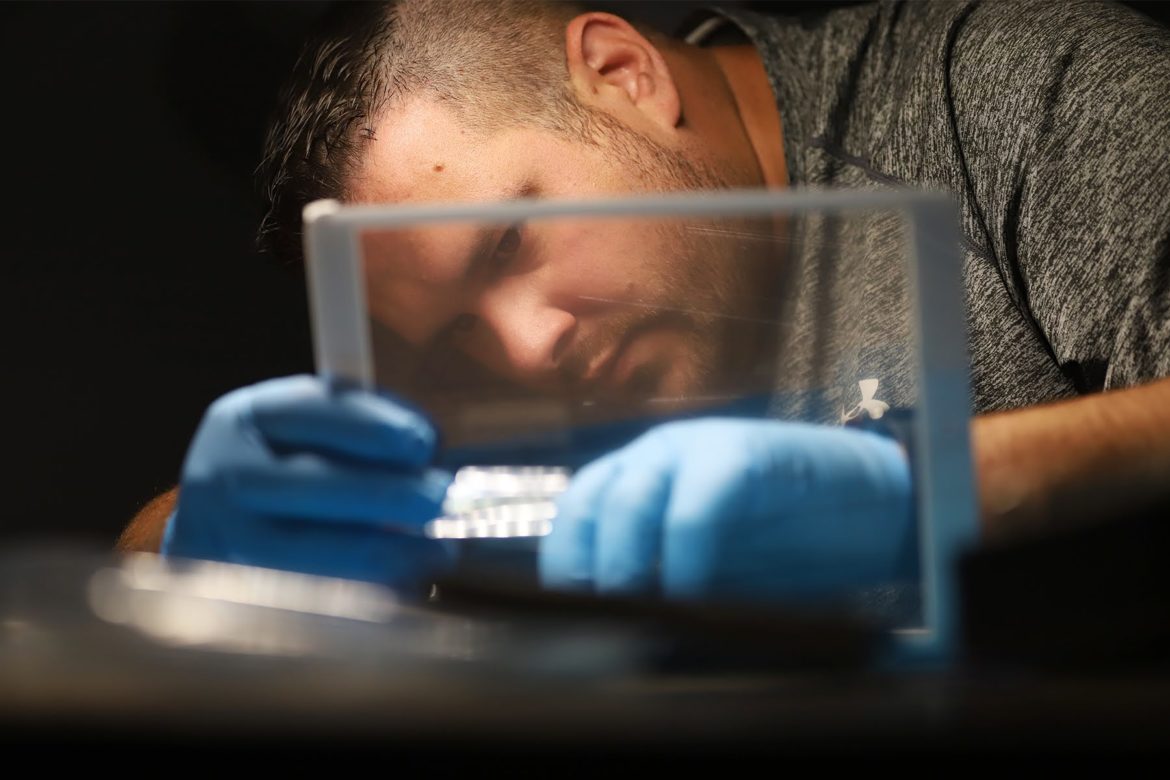 That would give independent repair shops the tools to better compete with original manufacturers, Turkovich and Wolf said.

For agricultural and medical hardware, Nagle and Flaherty noted a decrease in companies’ expected revenue from repairs may have the secondary effect of increasing the base prices of equipment.

“I need these companies to be around to sell them to me, but I can’t afford for them to take advantage of me,” Flaherty said. He added that the current right to repair legislation in the statehouse doesn’t address one of the biggest issues surrounding medical repairs: manufacturers’ control of brand-exclusive training for technicians.

Nagle, the farmer, said he’s OK with a price increase — as long as it means he can repair his equipment on his schedule.

“You don’t purchase things with a contingency plan of having to keep paying for it,” he said. “That’s not right. They’re basically holding you hostage to that.”

Chris Hippensteel is a PublicSource editorial intern. He can be reached at christopher@publicsource.org.