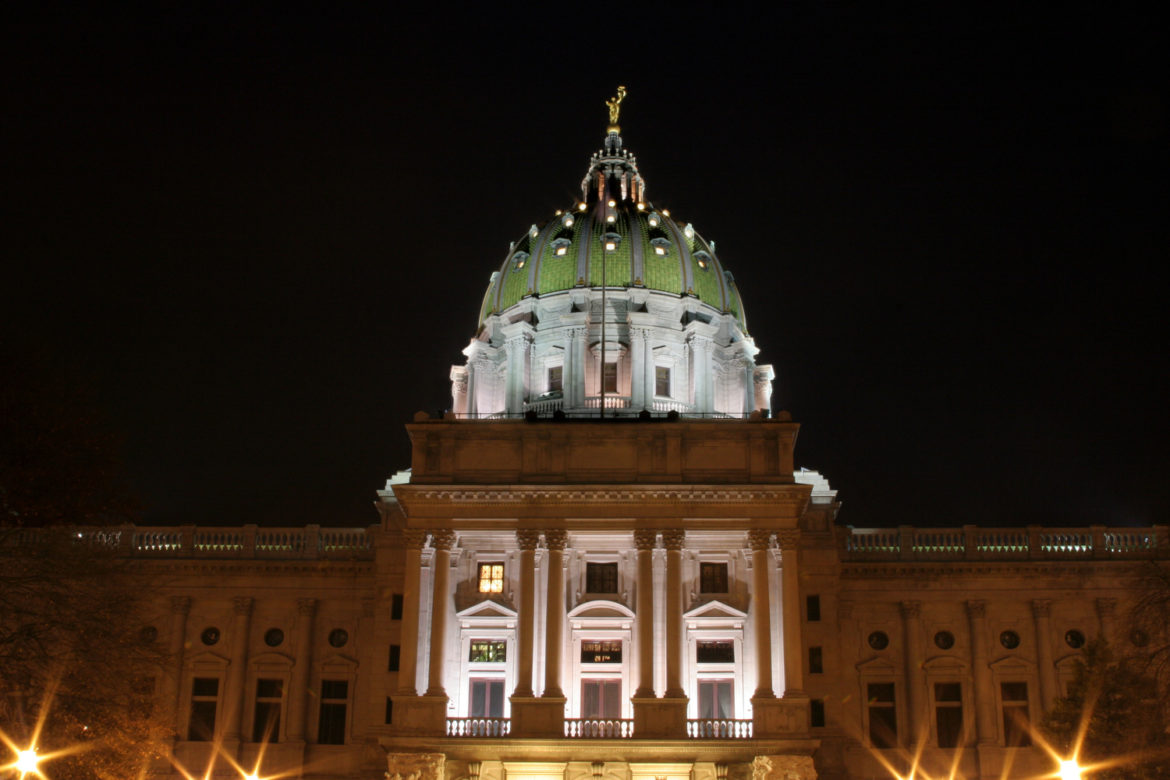 New bronze plaques adorn four of the portraits in the halls of the state Capitol in Harrisburg, in a collection that honors Pennsylvania's legislative leaders from Benjamin Franklin's time to the present.

The images of three former House speakers and a former Senate president pro tempore now bear engraved plates memorializing the dates of both their tenures and their corruption convictions.

The dubious decorations, added by order of last-year’s legislative leaders, are the closest Keystone State lawmakers have come to calling out the most recent spate of wrongdoing among their own.

The lawmakers, three of whom were snared in bipartisan schemes to use taxpayer funds for political campaigns, were among 40 members or top aides of the Pennsylvania Legislature who have been found guilty or pleaded guilty to public corruption charges in the past four decades, by informal count of G. Terry Madonna, director of the Center for Politics and Public Affairs at Franklin & Marshall College.

"Not one has ever been censured or reprimanded by an ethics committee of their chamber," said Madonna. "I want you to think about that. They don't have to worry about their own colleagues doing an independent investigation."

The lack of legislative or executive accountability and the absence of effective ethics entities, as well as weak laws and lackluster oversight of lobbying, political finance, and elections, have combined to give Pennsylvania an F in the 2015 State Integrity Investigation, conducted by the Center for Public Integrity and Global Integrity. Pennsylvania's numerical score of 58 placed it tied for 44th among the 50 states.

The failing grade marked a slide for Pennsylvania from the C- grade and 20th-place ranking the state earned in a similar assessment published in 2012. The new score is not directly comparable, however, due to changes made to improve and update the questions and methodology. This year's assessment did not take into account the process for redistricting, for instance, which generally occurs only once every 10 years, and additional questions were added on open data standards and election oversight.

Veteran Pennsylvania political observers were not surprised at the state's abysmal integrity rating. They describe a culture of casual acceptance for corruption that has become a self-sustaining force in the Keystone State: It has bred such broad voter cynicism that there is little effective public pressure for reform.

"I followed the custom when I should have followed the law," Pennsylvania's former Turnpike Commission chairman Mitchell Rubin told the court last November as he pleaded guilty to bribery.

The once-sprawling corruption case, centered on the state's toll road system, spoke volumes about the law and law enforcement in Harrisburg. Even though Rubin admitted accepting meals and collecting political contributions for legislative candidates from a contractor on the understanding it would influence his decision-making, his plea  allowed Rubin to avoid jail time on the charges.

The case ended with none of the eight original Turnpike defendants going to prison, and most of the charges dropped,  including those against a former state senator. Some observers blamed the state attorney general's office for mishandling the case, while others believe Pennsylvania's laws made the matter difficult to prosecute from the start.

There is no statutory prohibition in Pennsylvania law for state officials accepting gifts or hospitality, unless there is an explicit quid pro quo. Defense attorneys have successfully fought off prosecution of bribery by arguing that gifts were never linked to specific contracts or favors.

Philadelphia's district attorney did step in last year to prosecute four state legislators from the city caught on videotape taking cash from a lobbyist acting as an undercover informant. Two of those lawmakers pleaded guilty this summer and resigned their seats, but were able to avoid more serious charges and jail time and keep their state pensions. Two of the accused remain in office, fighting the charges.

Earlier this year, Harrisburg made its first move to quell gift-giving scandals. As one of his initial acts in office, new Democratic Gov. Tom Wolf signed an executive order banning gifts for political appointees under his jurisdiction. Two independent agencies recently tarnished by scandal — the Turnpike Commission and the state's ever-controversial Liquor Control Board — did the same. In part because of this move, Pennsylvania had an executive accountability rating near the middle of states in the State Integrity Investigation. But category ratings for legislative and judicial accountability were among the worst of all states.

It would require legislative action to make a gift ban permanent, or to have it apply to the state's lawmakers or its judges, who are elected. Although gift ban bills have been introduced and approved in the state House or Senate — as recently as last year— they've always fizzled before becoming final.

"A lot of lawmakers go to Harrisburg with the notion of changing the culture and lifestyle," said Madonna, of the Center for Politics and Public Affairs. "But they soon learn that you've got to go along to get along, if you want to get your bills through."

An even more serious problem than gift-giving, observers say, is Pennsylvania's lack of limits on campaign contributions, contributing to its ranking of eighth-worst state in political finance, according to the investigation. Individuals can kick in as much as they wish, as long as the donations are reported.

And although corporations cannot donate directly, they can easily get around that restriction by creating their own political action committees, which are permitted by law to donate directly. "It's the wild west in terms of money in Pennsylvania politics," remarked Larry Otter, an election-law attorney from Bucks County, in the Philadelphia suburbs.

Last year, spending on the Pennsylvania governor's race reached a record $82.3 million. Wolf, a businessman, contributed $10 million of his own money to launch a successful campaign against incumbent Republican Tom Corbett. But labor unions and businesses, with issues hanging in the balance in Harrisburg, poured money into the race on both sides, including the state's controversial and relatively new natural gas fracking industry.

The months-long budget standoff between Wolf, a Democrat, and the Republican-led state House and Senate, now feels clouded by the record campaign spending. Wolf wants to raise money with a severance tax on the gas drillers; Pennsylvania is one of the few major energy-producing states with none. But state lawmakers, whose campaigns also have benefited from gas industry largesse, won't budge.

"The fracking industry is just the latest special interest that has learned to play the game," said Barry Kauffman, executive director of Common Cause Pennsylvania, an advocacy group.

Meanwhile, the Legislature says the state could sell its 600 state-run liquor stores to private owners and bring in $220 million in revenue in the first year, something Wolf refuses to do. The governor says that selling a valuable asset would be bad for Pennsylvania in the long run, citing the potential profits of the stores, which brought $80 million into the state’s general fund in 2014. But critics accuse Wolf of bending to the will of one of his major donors, the state store workers' powerful United Food and Commercial Workers union. It doesn't help that one of the labor group's registered lobbyists this year is former House Speaker Bill DeWeese, one of the four lawmakers' whose corruption conviction is now emblazoned beneath his portrait on the Capitol hallway.

The state's budget woes have been all but overshadowed, however, by the saga of Pennsylvania Attorney General Kathleen Kane, criticized for her handling of both the Turnpike and the Philadelphia sting cases. Kane herself now stands accused (in part by her own staffers) of perjury, attempting to retaliate against critics by leaking secret grand jury information and then lying about it.

The state Supreme Court has suspended her law license for 30 days, but Harrisburg is reeling over her plan to release hundreds of sexually explicit emails shared by state officials and employees on government time and computers. The first batch, a set of about 50 including sexual jokes and photos of nude women, were sent to and from the email account of one of the Supreme Court justices. The stash was leaked to a Philadelphia newspaper before its official release by Kane on the first day of her suspension.

Kane had said in a statement that she is making an effort to "root out the culture of misogyny and racially/religiously offensive behavior that has permeated law enforcement and members of the judiciary in this commonwealth for years."

Kane has maintained that she will not be hampered from continuing as Pennsylvania's top law enforcement officer while her license is suspended, but the state Senate has begun to investigate impeachment proceedings. Wolf, who earlier said he believed Kane should step down, to no avail, now says he will defer to the Senate's decision.

Kauffman of Common Cause said that the part of the problem is that Pennsylvania's legislature, which passed an independent counsel law in the wake of an earlier attorney general scandal, allowed the measure to expire. "Had it been in place, we wouldn't have the political circus that the Kathleen Kane case has become," Kauffman said.

The state's Ethics Commission, he said, does as good a job as it can do with the resources and powers that it has. But as of late December 2014, the Commission had 11 vacancies on a staff of 27. Penalties and restitution levied were down 44 percent because compliance reviews and investigations had fallen. All of this led to a grade of F in the category of ethics enforcement.

The state’s political experts differ on whether Harrisburg's gridlock is due to the corrupting influence of money in politics or the same kind of partisan differences that have stalled action on so many issues in the U.S. Congress. But there's no question it is having real impact on the lives of Pennsylvanians.

Nonprofits, which the state relies upon heavily to provide services such as day care and meals on wheels, are under strain as funding is delayed. Some school districts have had to borrow money or cut benefits to teachers.

And beyond the budget woes, David Thornburgh, president and chief executive of the nonprofit Philadelphia watchdog group, the Committee of Seventy, argues that the economy in Pennsylvania has been weighed down by corruption. It's no coincidence, he thinks, that among the nation's ten most populous cities, Philadelphia has the lowest median income and the highest poverty rate at more than 25 percent.

"The way we approach politics is a political tax — a hidden cost of doing business," he said. Businesses and the people who work for them would prefer to locate to places where they are better assured that their tax dollars are being well spent, "and don't end up through a back channel in someone's pocket as payback," said Thornburgh. "I think there's a universal human attraction to places where government and politics work better."

This story is from the Center for Public Integrity, a nonprofit, nonpartisan investigative news organization in Washington, D.C. It is part of State Integrity 2015. How do each state's laws and practices deter corruption, promote transparency and enforce accountability? Click here to read more stories in this investigation.