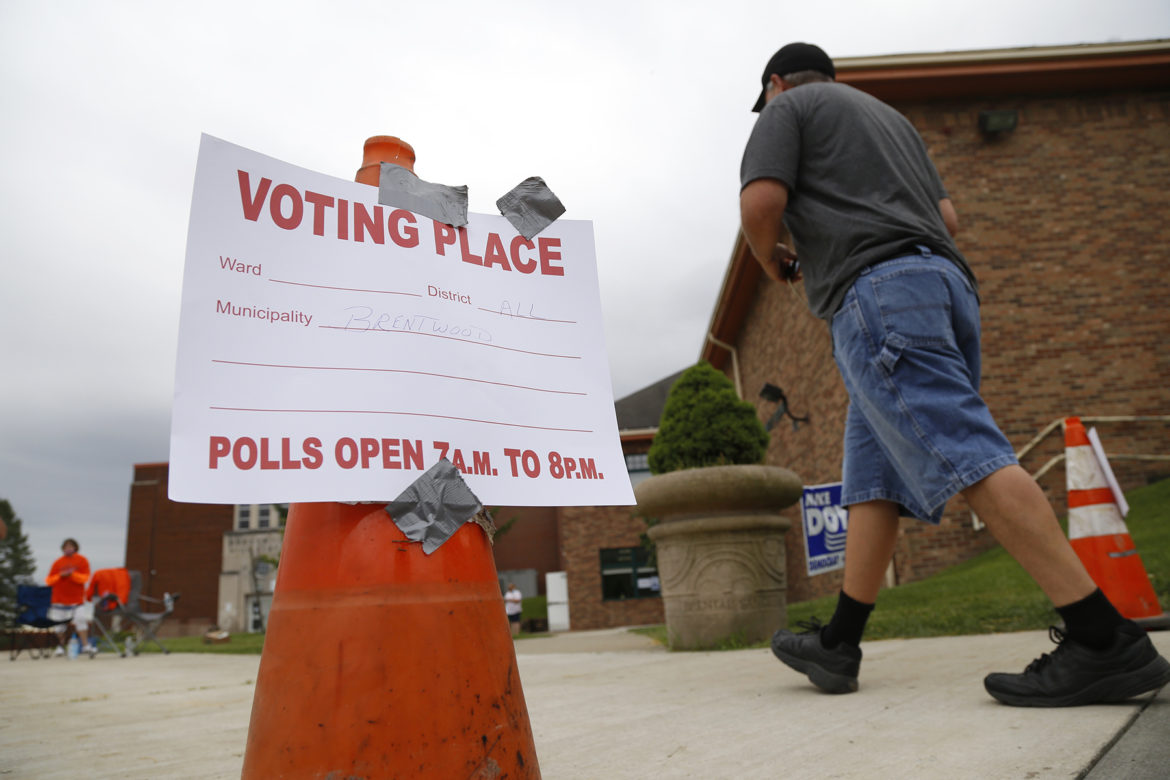 A voter walks to a polling place at the Brentwood Library during the June primary election. (Photo by Ryan Loew/PublicSource)

The November general election is being built up to be one of the most tense, consequential and unusual elections to take place in U.S. history. An incumbent president with historically low approval ratings is saying he wouldn’t commit to election results if he loses, all while a pandemic killing thousands of Americans per week has forced the country to shift toward mail-in voting.

For the first time, the election itself will be conducted on two separate tracks.

“There really are two elections, the in-person election and the vote-by-mail election are almost on parallel tracks,” said Rich Garella, co-founder of Protect Our Vote Philly. “And a lot of the processes are separate for those two.”

The primary election on June 2 was Pennsylvania’s first since changing its law to allow voting by mail without any excuse. Previously, voters could only apply for an absentee ballot for a limited number of reasons, and about 5% of votes were cast by mail in the 2016 general election.

In the June primary, more than 1.8 million people requested absentee ballots while less than 3 million Pennsylvanians voted in total.

County election officials can take lessons from the June election to prepare for a similarly-run November election, but turnout in the general is expected to be much higher than that of the primary. Experts told PublicSource there are a number of things that state and county governments, as well as voters themselves, can do to make the Nov. 3 election as safe and secure as possible.

What can voters do?

If a voter applies for a ballot today, they’ll receive it soon after ballots are mailed out in September. If they return a completed ballot shortly after that, experts say there will be almost no risk of being disenfranchised by Postal Service delays. Allegheny County, however, does not yet have a specified date for sending ballots, due to ongoing litigation about certain candidates being included.

If a voter waits to submit their ballot for any reason — and waiting to learn more about downballot candidates is a very good reason — voting experts advise them to look into ballot drop off options. Currently, the only confirmed drop off option in Allegheny County is the county elections office at 542 Forbes Ave.

Vote by mail if you can

If you can vote by mail early, doing so will make it easier for in-person voters to safely and easily cast their vote. Fewer people showing up to polling places will result in shorter lines and a lower risk of COVID-19 transmission. Each of the experts interviewed for this story said they plan on voting by mail, despite concerns about Postal Service delays.

“I’m voting by mail,” said Marian Schneider, president of Verified Voting. “As soon as I get the ballot I’m going to send it back. The best advice I can give to voters is don’t wait until the last minute.”

Consider being a poll worker

Poll workers tend to be older, and since the coronavirus poses a greater risk to older people, there is a concern that counties will face a shortage of poll workers. Schneider suggested that people who are at a low risk or already had the virus apply to work the polls. (While recovered patients have developed antibodies, it’s currently unknown what risk previous COVID-19 patients have for reinfection or transmission.)

According to its website, Allegheny County will use more than 1,300 polling places in November. This is a return to the status quo after the county consolidated to fewer than 200 polling places for the June primary. 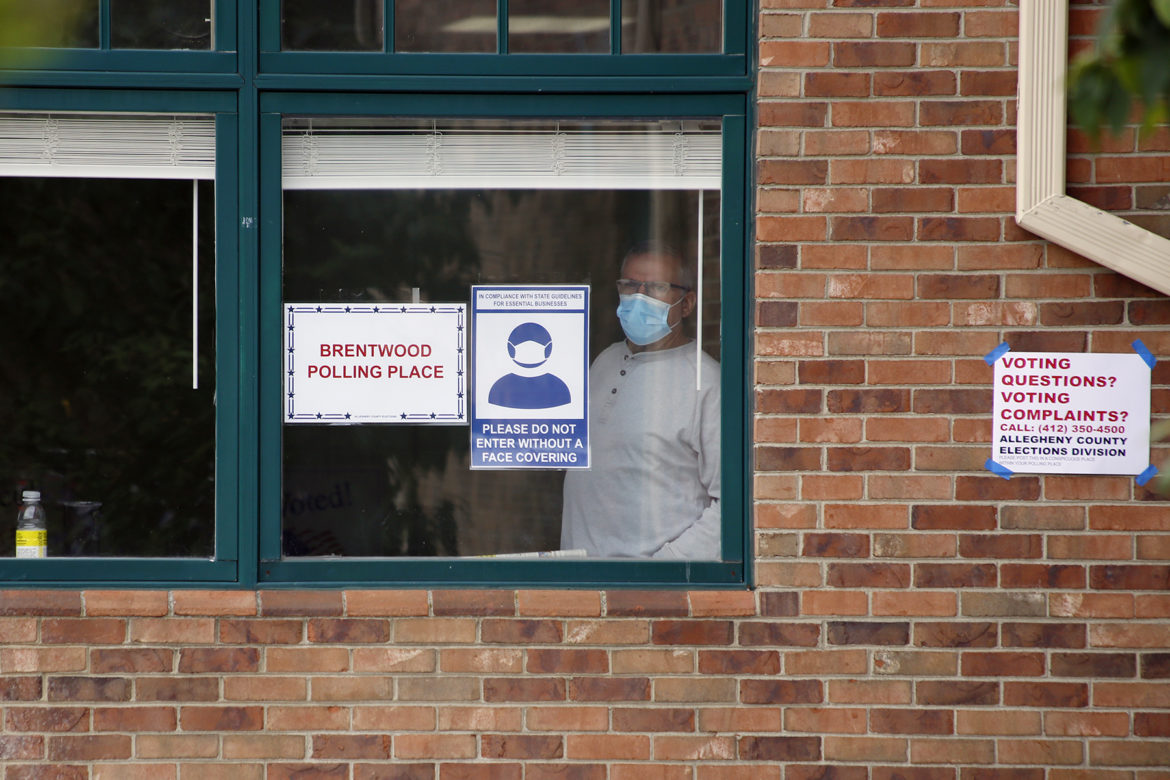 A sign in the window of the Brentwood Library advises those entering to wear a face covering. The library was used as a polling place during the June primary election. (Photo by Ryan Loew/PublicSource)

According to a county elections division newsletter, the county contacted people who worked the polls in either of the last two elections, and 2,500 had responded saying they are willing to work in November as of early August. The county estimates that 6,500 poll workers are needed for the Nov. 3 election.

Patrick Christmas, policy director of the good-government nonprofit Committee of Seventy, said there is great value in talking to your social circle about the election and how to vote, even in a nonpartisan way. Sending out an email blast about upcoming deadlines and voting systems can have an impact.

“Folks should not underestimate their own power in communicating accurate, trustworthy voter information and election information to their network,” he said. If someone can “help 10 or 15 or 20 people successfully vote who otherwise would run into an issue, that’s a serious amount of value to the democratic process.”

What can government do?

Voter education takes on even more importance when so many voters will be voting by mail for the first time. There are three deadlines voters need to keep track of — the deadline to register to vote, to apply for a mail-in ballot and to submit a completed ballot. On top of that, voters need to know where to find an application, where to send it, and where they can mail a completed ballot.

“I think a big thing we can learn [from the June election] is that there is a voter education gap,” said Suzanne Almeida, the interim director of Common Cause Pennsylvania. “Making sure that the voters know what the process is and know what it looks like when the process moves smoothly.”

Getting every vote counted

Pennsylvania law requires mail-in ballots to be “in the hands” of the county elections office by 8 p.m. on Election Day. Even if it was postmarked well before the election, under current rules, a ballot that arrives at the elections office after that deadline will not be counted.

This is a sticking point with voting advocates, especially considering Postal Service delays. The deadline to request a mail-in ballot is one week before Election Day; by the Postal Service’s own estimates, it may be impossible for someone to request a ballot on the day of that deadline and have the completed ballot received in time to be counted.

“You have to base the deadline on the actual ability of mechanisms to return the ballots in time,” said Garella of Protect Our Vote Philly.

“Folks should not underestimate their own power in communicating accurate, trustworthy voter information and election information to their network.”

A solution proposed by his organization and groups such as Common Cause Pennsylvania and Committee of Seventy is to allow ballots postmarked by Election Day to be counted even if they are delivered after Election Day.

“We want to give voters as much time as possible to decide they want to vote by mail,” said Almeida of Common Cause Pennsylvania. “The deadline to request a vote-by-mail ballot is a week before the election, which means there’s not a lot of time … So allowing a postmark or some other indicator that the ballot was mailed on Election Day and received after Election Day would allow voters who want to vote by mail to have that full franchise, and not risk disenfranchising anyone.”

A top official in the Pennsylvania Postal Workers Union said that such a measure could be critical in making sure all mail ballots are counted.

“I think they’re going to have to change that [law] so they can receive ballots up to three, four, five, maybe seven days after election because I really feel that the post office is setting itself up for failure in this aspect,” said Kevin Gallegher, the vice president of the PPWU. 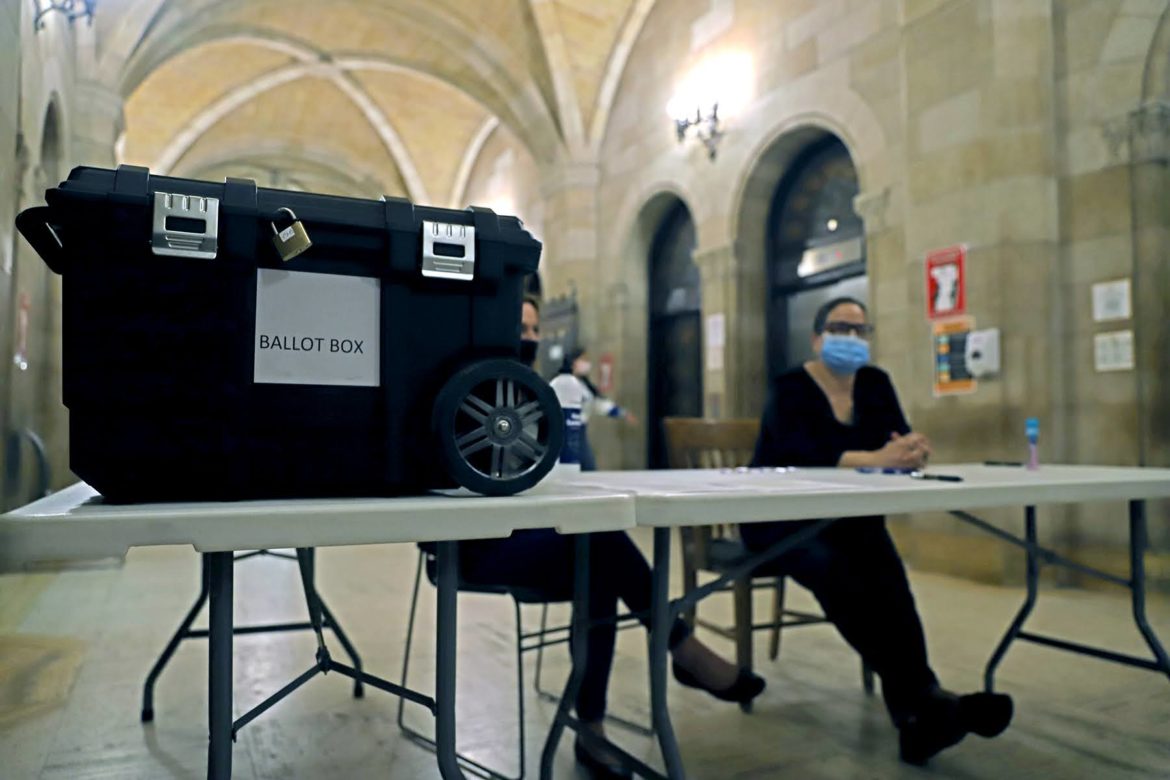 A ballot drop box in downtown Pittsburgh during the June primary election. (Photo by Jay Manning/PublicSource)

It’s unclear if Pennsylvania will use drop boxes like some other states. The campaign of President Donald Trump sued to bar the state from using them, but a federal judge put the case on hold on Aug. 23, saying that the federal court would “apply the brakes to this lawsuit” and let the Pennsylvania courts rule on voting issues. The Trump campaign lawsuit alleges that the drop boxes are unconstitutional and open the door to “fraudulent or otherwise ineligible ballots” being counted in the election.

“This seems like the Trump campaign sort of throwing up every argument it can think of to obstruct our ability to run an election efficiently,” Garella said. “I hope that there are drop boxes as long as they are done correctly and are secure and not some last minute cobbled together solution.”

Christmas said a workaround in the absence of drop boxes is allowing people to drop off their mail-in ballots at polling places on Election Day.

It’s election week, not Election Day, in 2020. Officials across the country have stressed that the higher-than-normal number of mail-in ballots will mean that the counting will take longer, and there likely won’t be a result on election night.

Experts say it’s important for the counting process to be transparent in order to maintain confidence in the integrity of the election.

“Because this is an especially tense election, and as a matter of best practice, I think it would be extremely beneficial for, basically a public education effort to focus on what is happening inside our election offices as workers are preprocessing, processing and counting these ballots,” Christmas said.

He suggested a live-stream of the counting room, a video tour showing the “life cycle” of a ballot, and frequently-updated results as ways counties can let the public keep watch over the process.

Almeida said that the systems are in place for a fully-secure election, and “we just need to communicate about the systems. Our elections are not going to be stolen.” 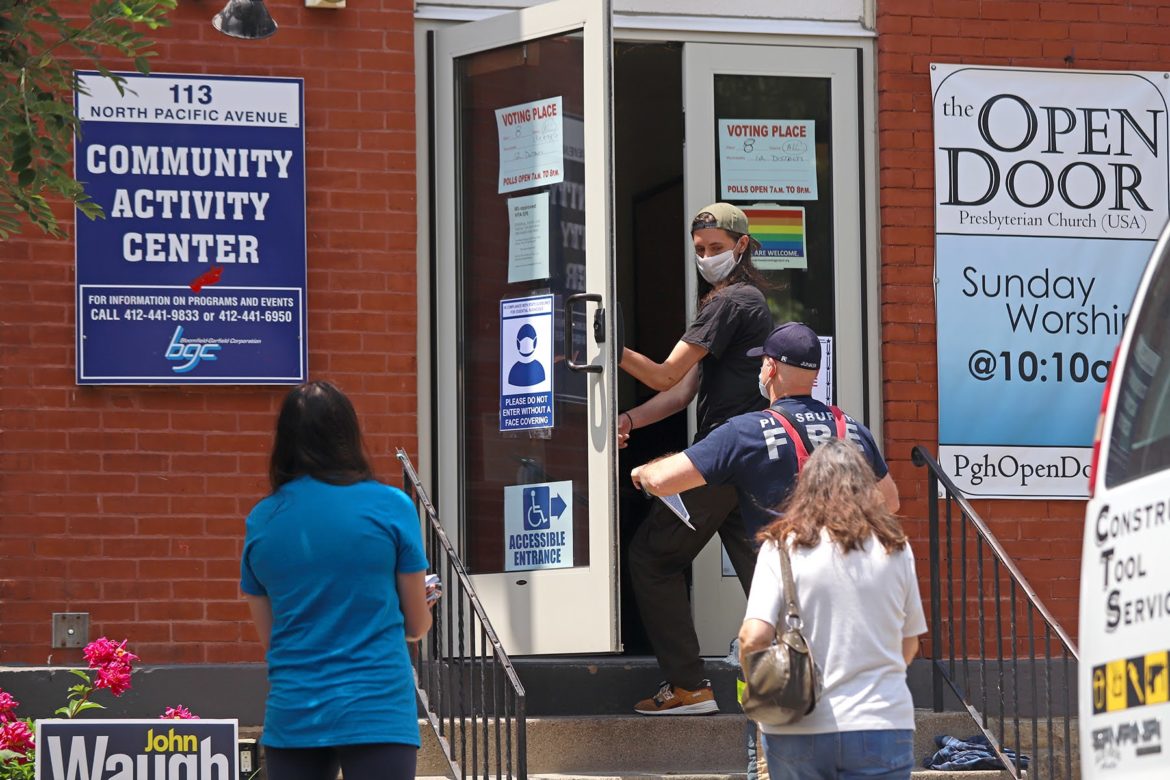 People enter a polling place in Garfield during the June primary election. (Photo by Jay Manning/PublicSource)

“We do not want to be in a position where there’s a very close race for president and the country is waiting on our 20 electoral votes and which way they’re going to go,” Christmas said. “Without time before Election Day for counties to do the preprocessing, which wouldn’t even include scanning, we’ll be putting ourselves potentially in a position with a tremendous amount of scrutiny over an extended period of time past Nov. 3.”

Invest in the election

All of the experts interviewed for this story agreed that counties will each need additional resources to meet the demands of this election. They need new equipment to sort and count paper ballots, they need more employees to process them, and they need personal protective equipment and cleaning supplies to protect poll workers and in-person voters.

“The bottom line for elections in these unprecedented times is counties are going to need more resources,” said Marian Schneider, president of Verified Voting. “And those resources are really in the form of people to work the back end and poll workers on the front end.”

Charlie Wolfson is a freelance journalist in Pittsburgh. He can be reached at wolfson.ch@gmail.com.