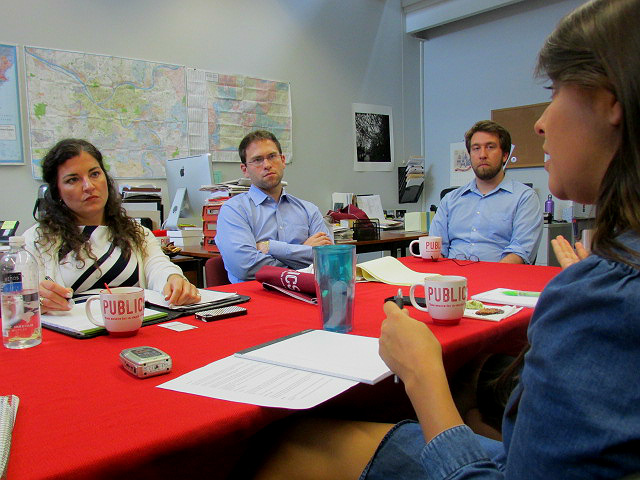 But PennFuture wants another greenhouse gas to share the limelight, officials from the environmental advocacy group told PublicSource today. That greenhouse gas is methane.

The EPA’s proposed Clean Power Plan, which will be discussed at the meeting, likely means there’s going to be less coal burned, which could mean relying more on natural gas for the nation’s energy needs, Sharp said.

Three folks from PennFuture stopped by for one of our Newsroom Notable sessions, where PublicSource invites area stakeholders to share what their groups are doing and the challenges they face.

Methane, the primary component of natural gas, is a short-lived but powerful greenhouse gas that is much more potent than carbon dioxide (C02). Methane makes up about nine percent of the nation’s greenhouse gas emissions.

People don’t really “get” the methane issue as much as they do the carbon issue, said Elaine Labalme, the group’s communication’s director.

Methane can leak from oil and gas operations, livestock and landfills, among other sources. With natural gas, it can leak from well pads, pipelines or from gas stoves, Sharp said.

The science is still out on methane leaks. Scientists are trying to figure out how much methane is released into the atmosphere and where it comes from. There are several studies by major universities in the works looking at the issue.

“Our concern is that with more gas and more people getting their electricity from gas, we really need to get the methane leakage issue under control,” Sharp told PublicSource.

We can reduce carbon dioxide emissions by pivoting from using coal to using more natural gas, said Christina Simeone, the director of PennFuture’s Energy Center. But if we don’t address the issue of methane leakage, we could end up just replacing one greenhouse gas with another.

And if regulators don’t track methane emissions correctly and account for it in air-quality reports, “it’s like you’re an accountant and there’s just stuff that’s off the books,” Simeone said.

While other states, including Colorado, Utah and Wyoming, are doing things to better track methane leaks, Pennsylvania is falling short, Sharp said.

“We really need to figure this out,” Sharp said.

“There are cost effective [and] relatively easy-to-implement solutions available,” he said.

Capturing methane at gas operations in Pennsylvania would help the gas industry because companies could capture and sell more product, Sharp said.