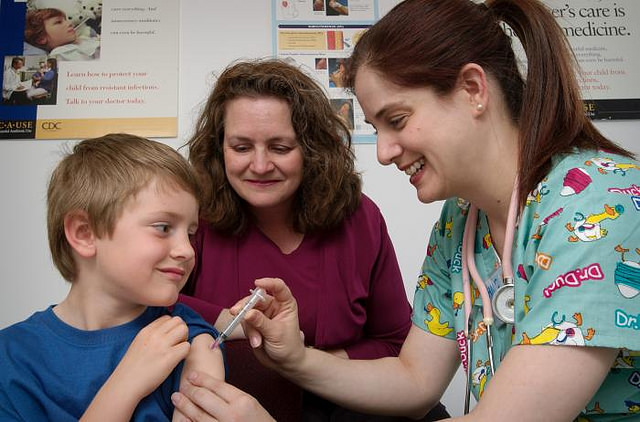 In response to PublicSource’s recent story about Pennsylvania’s low vaccination rates, Pennsylvania Secretary of Health Karen Murphy described the state’s “multipronged efforts” to fix this problem in a letter to the editor of the Pittsburgh Post-Gazette.

The Post-Gazette was among several PublicSource news partners that republished the story, including the Patriot-News in Harrisburg, the Observer-Reporter in Washington, Pa., and others.

In the letter, Murphy addresses the state’s eight-month provisional period, which was one of the story’s key points. The grace period means that a child can attend school for up to eight months — basically the entire school year — if that child has already received at least one dose of a multi-dose vaccine.

For instance, a child could attend school if he or she has received one of the two doses required for the measles, mumps and rubella vaccine.

Routinely over the past eight years, 10 percent of kindergarteners in a county — and sometimes as many as 20 percent — are not up to date on all their shots at the start of the school year.

On the provisional period, Murphy said:

This places a burden on school districts and presents a real and unnecessary risk for children to become infected and potentially spread a preventable, communicable disease. In addition, this provisional period has hindered accurate and timely data collection.

One of the critiques of the PublicSource story is that vaccination rates in the state aren’t as bad as the data suggests because children are vaccinated by the end of the school year, but the data is taken at the beginning of the school year.

The Patriot-News wrote a story advancing this idea. Murphy told the Patriot-News: “This year, we will complete data collection after March 31st when the provisional period has ended.”

Measuring at the end of the school year masks the real problem because measles — the most contagious disease that we looked at for our story — peaks in winter, leaving unvaccinated children vulnerable during the provisional period.

The data in our story, taken as a snapshot of vaccination rates in Pennsylvania at the start of school, showed good reason for parents to be concerned. It would probably be of little comfort to parents that children are vaccinated by the end of the school year if there was a measles outbreak in January, like there was this year in California.

Murphy told PublicSource before publication of its story that the department may eliminate the grace period next year. However, in her letter, she wrote:

We are seeking regulatory changes that would reduce the provisional period to four days prior to the start of the 2016 school year.