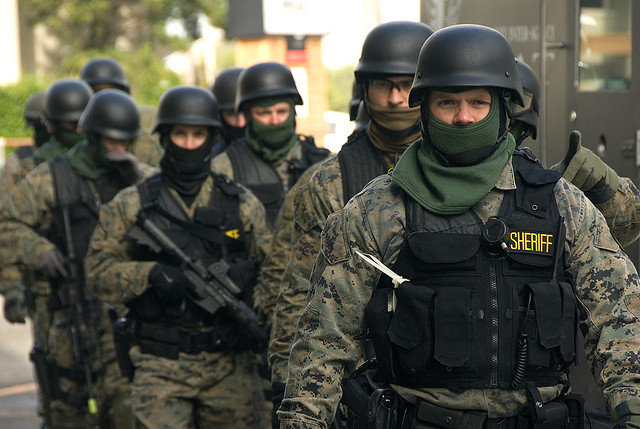 Police departments in Pennsylvania have 18 armored military surplus vehicles – eight of which are classified as “mine-resistant” – and hundreds of surplus assault rifles obtained through a free Department of Defense program, according to the New York Times.

Images from Ferguson, Mo., of police equipped like soldiers as residents protest the death of 18-year-old Michael Brown has brought national attention to the use of powerful weaponry by police.

Since 2006, police in Allegheny County have obtained 52 assault rifles, 24 pistols, 20 night-vision pieces, two mine-resistant vehicles and four other armored vehicles, according to data from the Department of Defense.

Fayette County police also have two mine-resistant vehicles, as do police in Delaware and Montgomery counties.

Assault rifles are the most popular surplus item in Pennsylvania. The weapons have been given to police in more than two dozen counties in the state.

Many counties have only a handful of the rifles, though officers in Philadelphia County have 510 rifles, while there are 144 surplus rifles in Dauphin County.

Click here to see the full breakdown for Pennsylvania and the United States.

Data is available only on the county level. Equipment allocated within a county could have been obtained by local or state police, according to the Times.

Sonya Toler, a spokeswoman for the Pittsburgh Department of Public Safety, said the city’s police department has not stocked up on surplus equipment recently.

“We have not put in a request for military surplus equipment in several years,” Toler told PublicSource.

Pittsburgh police, however, obtained crowd control equipment through other channels before the G-20 Summit in the city 2009. Toler said the department still has that equipment on hand, including four Long Range Acoustic Device sound cannons, purchased with a $200,000 federal grant.

Toler said information on other equipment obtained for the summit is only available through a Right-to-Know request.

Officers with stun grenades and tear gas clashed with protesters in Pittsburgh for the summit, and the city faced several lawsuits from activists and bystanders, including a suit that the city settled for $72,000 after a woman claimed she suffered permanent hearing loss after police used a sound cannon for crowd control.

During the summit, a number of police departments from across the country came to Pittsburgh to help.

St. Louis County, where the killing of Brown by a police officer set off protests, only received a small amount of military surplus equipment through the program created by Congress in 1990. The program was originally created to give police tools needed for drug enforcement.

Surplus equipment is free for departments, though much of the other equipment used by police across the country is purchased with grants from the Justice Department and the Department of Homeland Security.

A $360,000 Bearcat armored truck used in Ferguson, for example, was purchased using a grant from Homeland Security, the Times reported.

Justice Department money can be used on weapons, which includes tear gas and rubber bullets, according to the Times.

All these programs began or were expanded in response to the Sept. 11 attacks, when the authorities in Washington declared that local police departments were on the front lines of a global war on terrorism. Terrorism is exceedingly rare, however, and the equipment and money far outpaced the threat.

“You couldn’t say that back then with as much certainty as you can say that now, though,” said Frank J. Cilluffo, director of the Homeland Security Policy Institute at George Washington University. After Sept. 11, few people asked whether the police would use the equipment against protesters, Mr. Cilluffo said. “By and large, I don’t recall an outcry of any sort historically along these lines.”

While items like armored vehicles and weaponry are commonly requested nationwide, surplus items can be almost anything, including glow-in-the-dark bowling pins, karaoke machines or an inflatable bouncy castle.