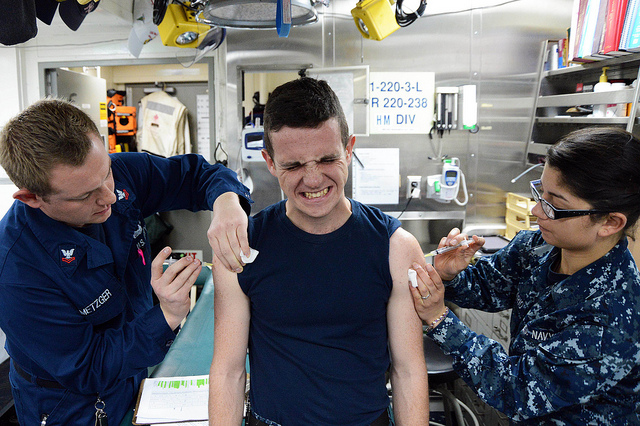 The proposal would add pertussis, also known as whooping cough, to the list of required vaccines. It would also require an additional booster for the meningococcal conjugate vaccine (for bacterial meningitis) for 16-18 year olds and a booster for the diphtheria, tetanus and pertussis (Tdap) vaccine for 11-18 year olds.

The additional requirements for boosters would be in line with recommendations from the Centers for Disease Control and Prevention Advisory Council on Immunization Practices, according to information released by the state.

Children can receive the pertussis vaccine through the combination DTaP vaccine, which includes diphtheria, tetanus and pertussis.

While whooping cough was basically stamped out by 1970, according to this chart from the CDC, it has made a resurgence. There were fewer than 2,000 reported cases in 1980, but slightly more than 30,000 cases were reported last year.

The proposal would also cut the state’s eight-month provisional period, during which students can attend school without having all of their required vaccines, to just five days. After five days, a student would not be allowed to attend school under the proposal.

Dr. Scott Shapiro, president of the Pennsylvania Medical Society said in a statement, “Currently, children are allowed to attend school as long as they have received the first dose of a multi-dose vaccine and have up to eight months to complete all required doses. That eight-month window is a crack in our herd immunity armor.”

The proposal would also change the deadline for school to send their immunization data to the health department from Oct. 15 to Dec. 31 and require them to file it electronically. For schools that can’t file electronically, those schools could still file on paper before Dec. 15.

However, the health department is still moving forward with this year’s plan to change the reporting deadline from Oct. 15 to March 31. Since the data won’t be collected until the end of the year, the department won’t be able to assess areas of risk for an outbreak or know how many children started the year unvaccinated.

Sen. Daylin Leach, D-Montgomery, introduced the Senate bill in February and issued a statement on Thursday:

"By tightening our immunization requirements, Pennsylvania is working to ensure that as many students as possible are protected from dangerous diseases. But we can do more,” Leach said. “The philosophical exemption permits thousands of unvaccinated children to attend our schools for no apparent medical or religious reason."

These proposed regulations have been finalized since PublicSource reported on the state’s poor vaccination rates and data verification methods at the end of August. PublicSource analyzed eight years of vaccination data to show that as many as one in five of the state’s students might not have the required vaccinations, making it one of the worst states in the nation.

An overwhelming majority of Pennsylvania counties — 50 out of 67 — never reached a key threshold for herd immunity with the measles, mumps, and rubella vaccine in those years. The PublicSource data analysis found the largest contributing factor to the state’s poor rates was the eight-month provisional period, not the religious or philosophical exemptions.

The eight-month grace period allowed children to come to school without complete immunizations for nearly the entire school year, which concerned the medical experts because the children were at risk during peak measles season in late winter or early spring.

Worden said the Advisory Health Board approved the proposal on Wednesday.

However, that’s just the first step in what could be a very long process. As Worden explained, the new regulations still have to be reviewed by the governor’s office, the State Board of Education, both House and Senate committees on health and the committees on education, as well as the Independent Regulatory Review Commission.

The entire process could take anywhere from nine months to two years, according to state estimates.