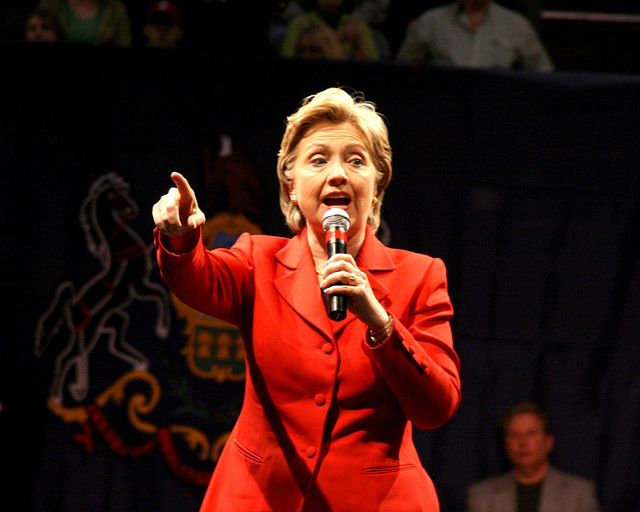 Hillary Clinton speaking into a microphone.

All eyes might be on the tight race in Iowa today, but in Pennsylvania, a political breakdown shows little contention surrounding the Democratic candidates.

According to polls released in the last two weeks, Democratic primary voters in Pennsylvania and in Pittsburgh are still considerably pro-Hillary Clinton, while Republicans favor Donald Trump over Texas Sen. Ted Cruz.

Last Friday, the Clinton campaign announced that she has the support of all 13 members of the Pennsylvania Democratic National Convention (DNC).

“We’re honored to have the support from these party leaders who know that Hillary Clinton is the only candidate who can stop Republicans from ripping away all of the progress we’ve made,” said Marlon Marshall, director of state campaigns and political engagement.

Still, Sanders might have a fighting chance. A Franklin and Marshall poll released last week shows that he has gained considerable ground among Pennsylvania Democrats since October 2015, when just 18 percent of people said they would vote for him in the primary. In January, that number rose to 29 percent, while Clinton’s fell from 52 percent to 46 percent.

In the Republican race, a similar parallel has mounted between billionaire real estate mogul Trump and Cruz.

In October 2015, 23 percent of Republican primary voters said that if they could vote now, they’d pick The Donald, while Cruz was taking only 4 percent. Recently, support for Cruz has jumped to 14 percent, while Trump has eked out only 1 percent more in support.

The Keystone State has three Democratic candidates for U.S. Senate. The F&M poll showed that over 60 percent of voters are still unsure who they’ll choose among the contenders.

Of the three candidates hoping to unseat current Republican Pennsylvania U.S. Sen. Pat Toomey, Sestak is in the lead with 33 percent.

McGinty, who has filled several environmental positions in her career, including environmental advisor under Clinton, is currently runner up at 28 percent. Fetterman trails with 11 percent (although 25 percent of voters have a “somewhat favorable” or “very favorable” opinion on tattoos, of which he has a few).

During the debate, Fetterman took a home-grown approach, emphasizing his focus on drug policy and inequality in Braddock, a borough east of Pittsburgh. He promised to compromise with Republican senators, as long as they were willing to openly discuss issues like a living minimum wage and gun control.

Fetterman heralded support for a living minimum wage and called Planned Parenthood “one of the finest organizations doing some of the most important work in America today.”

McGinty said the middle class deserves a champion and she wanted to “step up and be that champion.” She emphasized her role in expanding Medicaid under Wolf and passing renewable energy requirements in a Republican-led Legislature. She also said it would take the women of the Senate coming together to break the budget impasse.

“A little pizza, a little beer and they got it done,” she said. “I have gotten stuff done with tough Republican legislatures.”

Sestak, whose 4-year-old daughter got brain cancer in 2005, supported universal health care after she was cured. As a Naval veteran, he encouraged a cautious approach to use of the military in the fight against ISIS.

“We have to stop treating ISIS just like an international terrorist organization,” Sestak said, “[but as] a state with the size of Belgium, a population like Norway...that we must take down with our air power.”

Despite some strong statements from each of the candidates, it was no drama-filled Republican smackdown. As the Pittsburgh Post-Gazette’s Chris Potter points out, there wasn’t much disagreement among the Democrats on stage.

Squirrell Hill resident Marcia Bandes told the Post-Gazette, any of the candidates “would be better than Pat Toomey.”