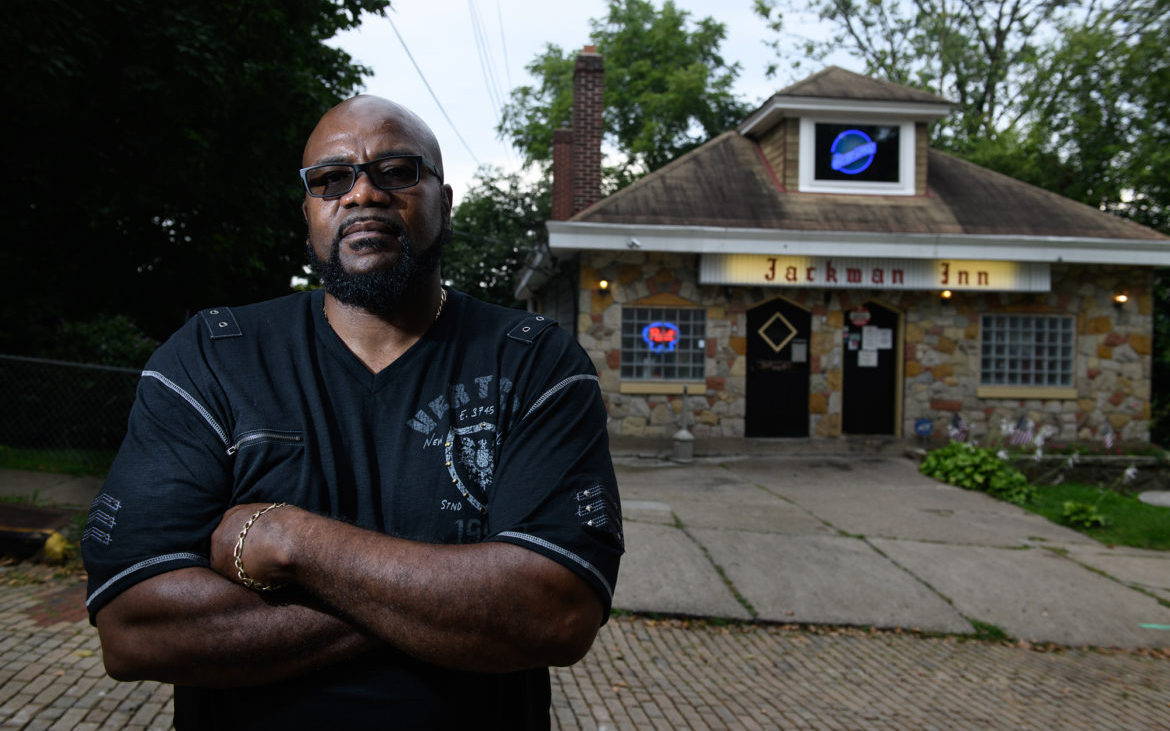 AVALON, PA-AUGUST 25, 2018: Paul Morris of Brighton Heights stands in front of Jackman Inn on Sunday, August 25, 2018 in Avalon, Pa. Morris was assaulted in the bar on July 7 by six people allegedly members of a white supremacist group. (Justin Merriman for PublicSource)

When allegations surfaced that a group of six white nationalist skinheads shouted racial slurs and assaulted a black man last month in an Avalon borough dive bar north of Pittsburgh, police charged each member of the group with “ethnic intimidation” — the Pennsylvania statute designed to prosecute hate crimes.

The statute defines such an offense as involving “malicious intention toward the race, color, religion or national origin of another individual or group of individuals,” but a review of ethnic intimidation cases in Allegheny County shows that they almost never hold up in court.

PublicSource has identified 49 criminal cases in which police filed ethnic intimidation charges against defendants in Allegheny County in 2016 and 2017.

Forty-seven of Allegheny County’s remaining ethnic intimidation cases in 2016 and 2017 were either dismissed or never pursued by prosecutors.

Only one resulted in a hate crime prosecution: In June 2017, Ian “Toxxik Fox” Worn, while attending Anthrocon, the annual furry convention in downtown Pittsburgh, allegedly screamed racial slurs at a black Allegheny County Sheriff’s deputy. The Allegheny County Sheriff’s Office charged Worn with three counts of ethnic intimidation. Worn pleaded guilty to the charges and is now serving out an 18-month probationary sentence in California, where she had outstanding warrants.

Forty-seven of Allegheny County’s remaining ethnic intimidation cases in 2016 and 2017 were either dismissed or never pursued by prosecutors. One case, that of Caleb Pemberton, is yet unresolved, and set for a non-jury trial in October. After being stopped and jailed under suspicion of driving under the influence, Pemberton allegedly referred to a black, female Pittsburgh police officer using racial slurs.

The FBI's Uniform Crime Report captures only two-thirds of the hate crime cases that PublicSource discovered in its survey of Allegheny County cases from 2016 and 2017. The statistics stem from what local police departments report.

The reasons for prosecutors with the Allegheny County District Attorney's Office not aggressively pursuing ethnic intimidation cases are varied, says Lu-in Wang, a law professor at the University of Pittsburgh whose work focuses on discrimination and who has written extensively about hate crime laws. Prosecutors may not have all the information they need to show “malicious intention” in each case, for example, and may instead pursue different charges that are more certain to end in guilty pleas or convictions.

Deciding to aggressively pursue these cases, Wang said, would send a strong message in the opposite direction: That they’re important, no matter what.

“One of the problems is when people think they can get away with it, then there’s no deterrence and it’s almost like you’ve gamed the system.”

“It would be good to call out hate crimes more when they happen and to show that there are consequences,” Wang said. “One of the problems is when people think they can get away with it, then there’s no deterrence and it’s almost like you’ve gamed the system.” When hate crimes aren’t pursued by prosecutors, she said, there’s no government entity officially “calling out society’s condemnation” of hate crimes when they occur.

Mike Manko, a spokesman for the county district attorney’s office, provided a statement in response to PublicSource’s email request for an interview on the subject.

“As a rule, we don’t talk in broad or generic terms about particular statutes and the tactics used to prosecute those statutes,” Manko wrote. “Ethnic intimidation is an add-on charge that needs to have another crime associated with it. Each of these cases comes in on its own merits and evidence, and there is no way for me to know in each of the cases you are mentioning why that particular charge was not part of the disposition.”

The lack of ethnic intimidation charges as part of final dispositions is unusual, according to David Harris, a University of Pittsburgh law professor who writes and teaches about police behavior.

Documenting Hate: Help us create a database of hate incidents in the Pittsburgh region. Tell us your story by filling out this form.

“It’s not unreasonable for [prosecutors] to say, ‘OK, let’s be sure about what we have here,’” before prosecuting hate crime charges,” Harris said. “It’s one thing to be careful; it’s another to find that they have [prosecuted] basically none of them. You kind of wonder what would be enough.”

Time will tell if the circumstances of the July assault in Avalon will be “enough.”

Located about a block off of the busy, four-lane Ohio River Boulevard, the Jackman Bar & Restaurant sits along a quiet, tree-lined residential street in Avalon, about 6 miles northwest of Pittsburgh’s Point State Park. The bar features a pool table, a kitchen and a full bar. It’s non-smoking, but there’s a small wooden deck in the back where smokers gather. 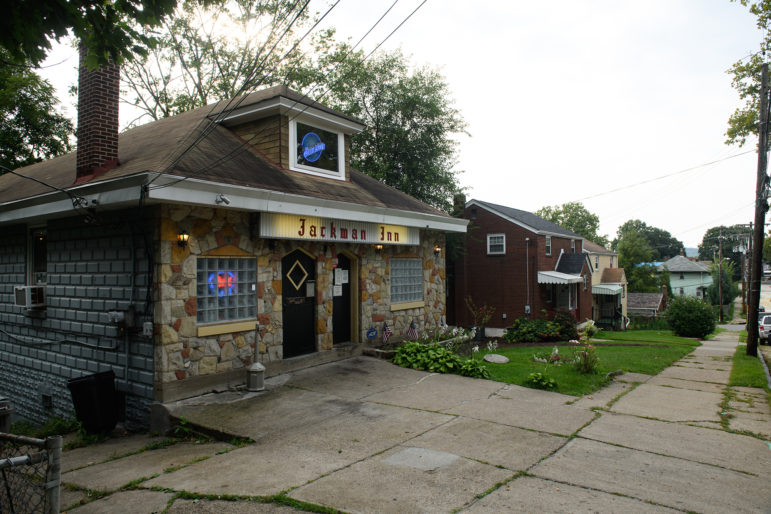 Paul Morris was assaulted in the Jackman bar on July 7 by six people who are alleged to be members of a white nationalist skinheads group. (Justin Merriman/PublicSource)

On Saturday, July 7, around 11 p.m., Paul Morris, a 50-year-old black man, entered the bar to thank and chat with the on-duty cook, Javon Jenkins, who is also black. Jenkins had recently cooked food for Morris’ son’s graduation party. The two stepped out onto the deck for a smoke.

From inside, according to affidavits of probable cause describing the incident, a group of white men and women began shouting to Morris and Jenkins, addressing them by their race. Morris would later tell a responding police officer that they’d referred to him by using racial slurs. Many in the group wore patches on their clothing that showed a keystone symbol surrounding the outlined head of a pitbull. The symbol connects to Keystone United, the white nationalist skinhead group co-founded by Luzerne County Republican committee member Steve Smith. Smith actively campaigns as a “white rights advocate,” and Keystone United has been flagged by the Terrorism Research and Analysis Consortium for its “increasingly violent” activities.

What does hate look like? A guide to symbols used by hate groups in PA.

Morris told PublicSource that he heard members of the group in the Jackman say that they were going to “eradicate all of you niggers one by one.” They began to approach Morris, who told police he walked inside because he thought he might fall off — or break through — the rickety smoking deck if a fight ensued. Morris is 6-foot-3 and weighs 270 pounds.

Morris said he was bombarded almost immediately; members of the group  punched and kicked him. He said he was also hit by some other flying object that he couldn’t identify in the melee. Morris was able to get to the front of the bar, and the Jackman’s general manager, Jackie Scanlon, called the police.

When police arrived, Morris said, Avalon police officers pursued it as though it were a mere bar fight. Several people involved in the attack fled the bar and were apprehended by police, who declined to arrest them. Morris went home that night with a bloodied face and sore neck from where he’d been punched and attacked. Avalon police did not respond to an emailed request for comment about the incident.

The next day, he said, friends from the bar contacted Morris over Facebook to show him a photo of the group at a white nationalist rally holding a “DEFEND OUR COMMUNITY!” banner, and the Facebook page of one member of the group, Travis Cornell, displaying a banner photograph of a Keystone United flag. 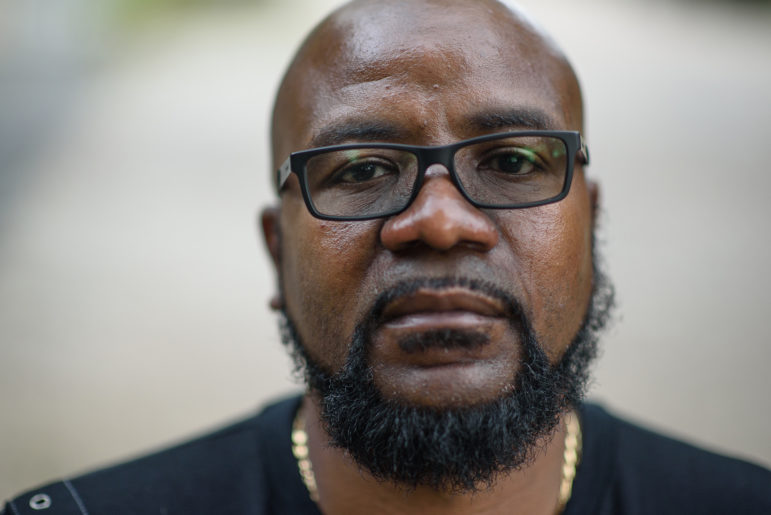 Paul Morris discussed how the July 7 attack at the Jackman bar affected him: "I’ll tell you the truth, when someone walks up to me and looks at me, I take a double look — like, who are you? So this has made me a little paranoid, which I've never been in my life." (Justin Merriman/ PublicSource)

Fearing that Avalon police would decline to charge anyone, Morris contacted Fred Rabner, a prominent civil rights attorney in Pittsburgh, who took the story to local media outlets.

Scanlon, the bar manager, told the New Pittsburgh Courier that investigators only began conducting witness interviews on July 16 — nine days after the incident.

On July 18, Avalon police charged six people in connection with the assault: Natasha Dawn Bowers, 33, of Roaring Spring; Terrence Raymon Stockey, 40, of Beaver; Jeremy L. Ingram, 35, of Hollidaysburg; Travis Lee Cornell, 43, of Marianna (now deceased); Crystal Lynn Shields, 23, of Tarentum; and James Edward Kryl, 45, of the North Side. Each were charged with one count of ethnic intimidation, two counts of criminal conspiracy and one count of simple assault.

In criminal complaints filed against the six patrons alleged to have confronted Morris, an officer wrote that the group exited the building through the fire escape and fled, and that they prominently displayed their connections to a white nationalist skinhead organization, Keystone United.

“Several of the group members had tattoos stating ‘skinheads’ or with symbols associated with skinheads and several were wearing shirts with KSS (keystone state skinheads) with a doggie head inside a keystone shape,” the complaints read.

“A lot of times, something that could be treated as a hate crime isn’t even pursued by the victim as a hate crime, but this is actually pretty different. It seems pretty blatant.”

A statement from Keystone United disputed police and witness accounts, as well as Morris’ account, but wrote, “Unfortunately, we can not go into too much detail due to legal issues….”

Lu-in Wang doesn’t see a circumstance in which the attack could avoid a finding of ethnic intimidation.

“A lot of times, something that could be treated as a hate crime isn’t even pursued by the victim as a hate crime, but this is actually pretty different,” she said. “It seems pretty blatant.”

Morris agrees, but is also trying to move past the attack.

“I got a family that loves me and lots of friends and a great network,” Morris said. “But I’ll tell you the truth of the matter: I graduated from Avonworth High School in a class with two black males… There’s a small black community in Avalon and I’ve been there all my life, drinking out in the woods with white dudes with hair down to their waist and never felt anything [resembling fear]. But now, I’ll tell you the truth, when someone walks up to me and looks at me, I take a double look — like, who are you?”

“So this has made me a little paranoid,” Morris continued, “which I’ve never been in my life.”

Matt Stroud is a freelance reporter in Pittsburgh. He can be reached at matt@publicsource.org. Follow him on Twitter @mattstroud.

Joshua Vaughn contributed to this story. He is a crime reporter for the Sentinel in Carlisle and a freelance writer. He can be reached at jpvaughn121@gmail.com. Follow him on Twitter at @Sentinel_Vaughn.

3 thoughts on “Out of 49 hate crime charges in Allegheny County, only one led to a conviction. Why?”