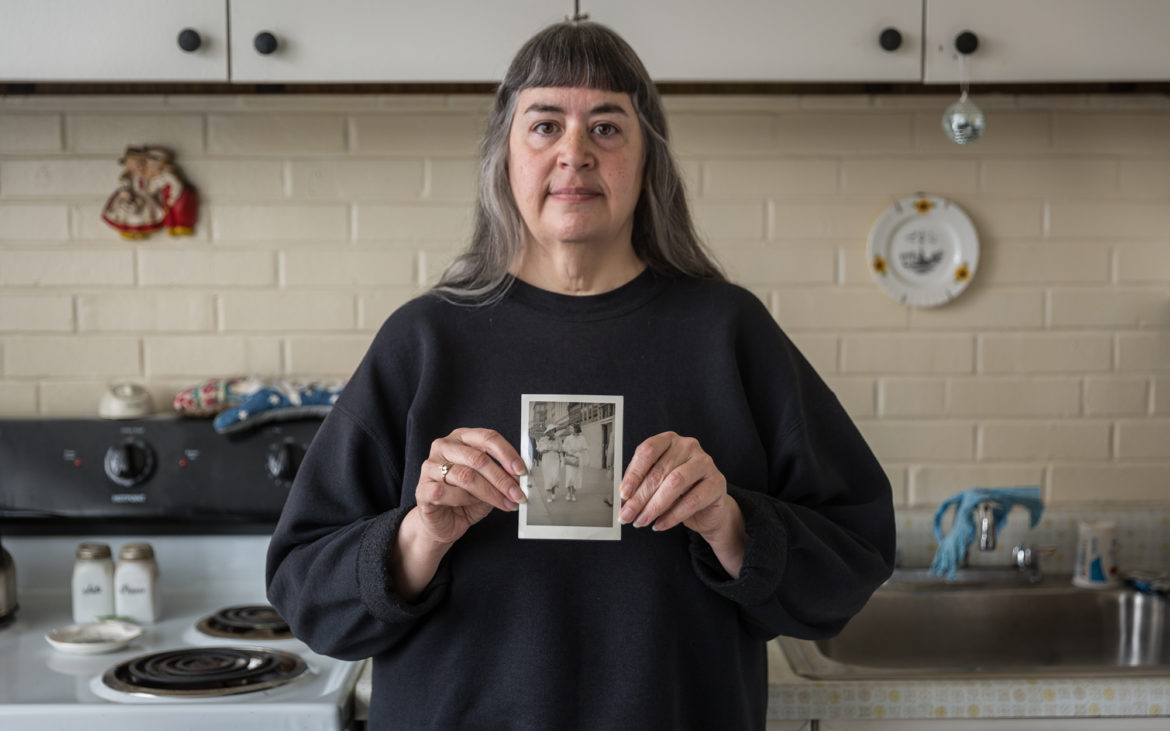 Vivian Campbell in the kitchen of her Penn Plaza apartment. She is holding a photo from 1936 of her grandmother and her great-grandmother walking down Penn Avenue in East Liberty. (Photo by Maranie Rae Staab/PublicSource)

Vivian Campbell cannot imagine her life away from East Liberty. For her, leaving the neighborhood would mean interrupting her family’s legacy. Vivian’s family settled in East Liberty 125 years ago. It is where their American story began.

“I am fifth-generation East Liberty. My great-great grandfather moved from Italy and settled here in 1892.”

For the time being, Vivian — one of the last residents of the beleaguered Penn Plaza apartments — is able to stay in East Liberty. Last week she found out that she and three other residents would be moving three blocks away from Penn Plaza to Mellon's Orchards on Friday, March 31, the eviction deadline for all Penn Plaza residents. At first glance, the new residence seems like a solution. But it is a temporary fix. Previously “mothballed,” Mellon's Orchards has been undergoing renovations to become habitable for Vivian and the others who are to move in. Vivian hasn’t yet seen the apartment she is moving into. That is a luxury she has not been afforded.

Vivian is 56, she is single, has never been married and does not have children. Her roommate is her pet fish named Baby. They’ve lived in Penn Plaza together since 2014, when Vivian bought Baby at PetSmart on Centre Avenue after her previous pet fish, Howie, died. “Growing up, we always had pets. Without Baby, I just feel so lonely. I don’t have a significant other and I don’t have kids. I get to nurture Baby.” 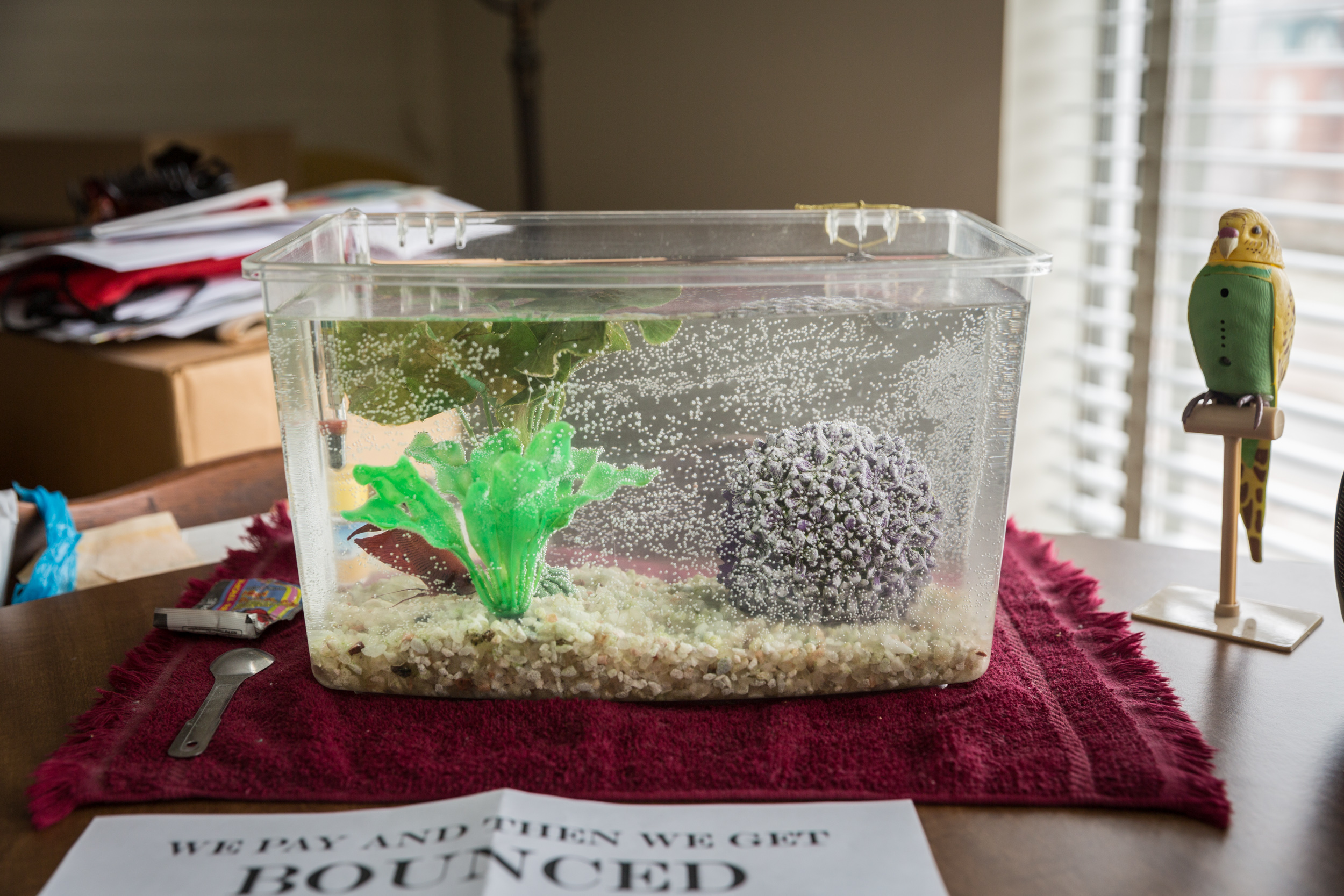 Vivian’s pet fish named Baby is swimming in a fish tank. "I just have to make sure that I keep a roof over my head, our heads,” Vivian said. (Photo by Maranie Rae Staab/PublicSource) 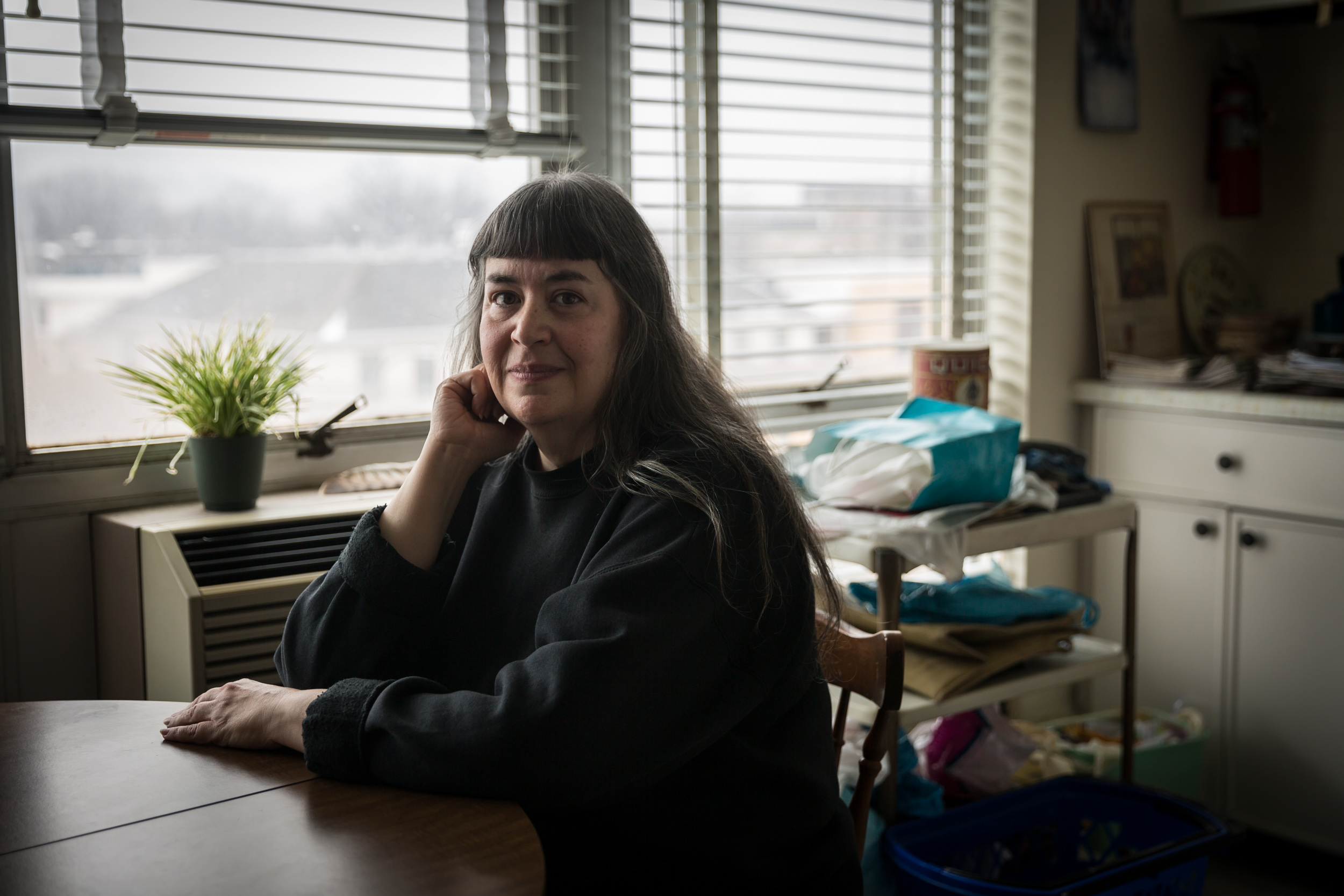 On Friday, March 31, after eight years living in Penn Plaza, Vivian will move a few blocks away to Mellon's Orchards. She will be among the last residents to leave Penn Plaza. She is grateful to be able to remain in East Liberty, but that time is limited. In 16 months, she will be displaced from Mellon Orchards and will have to move again. (Photo by Maranie Rae Staab/PublicSource) 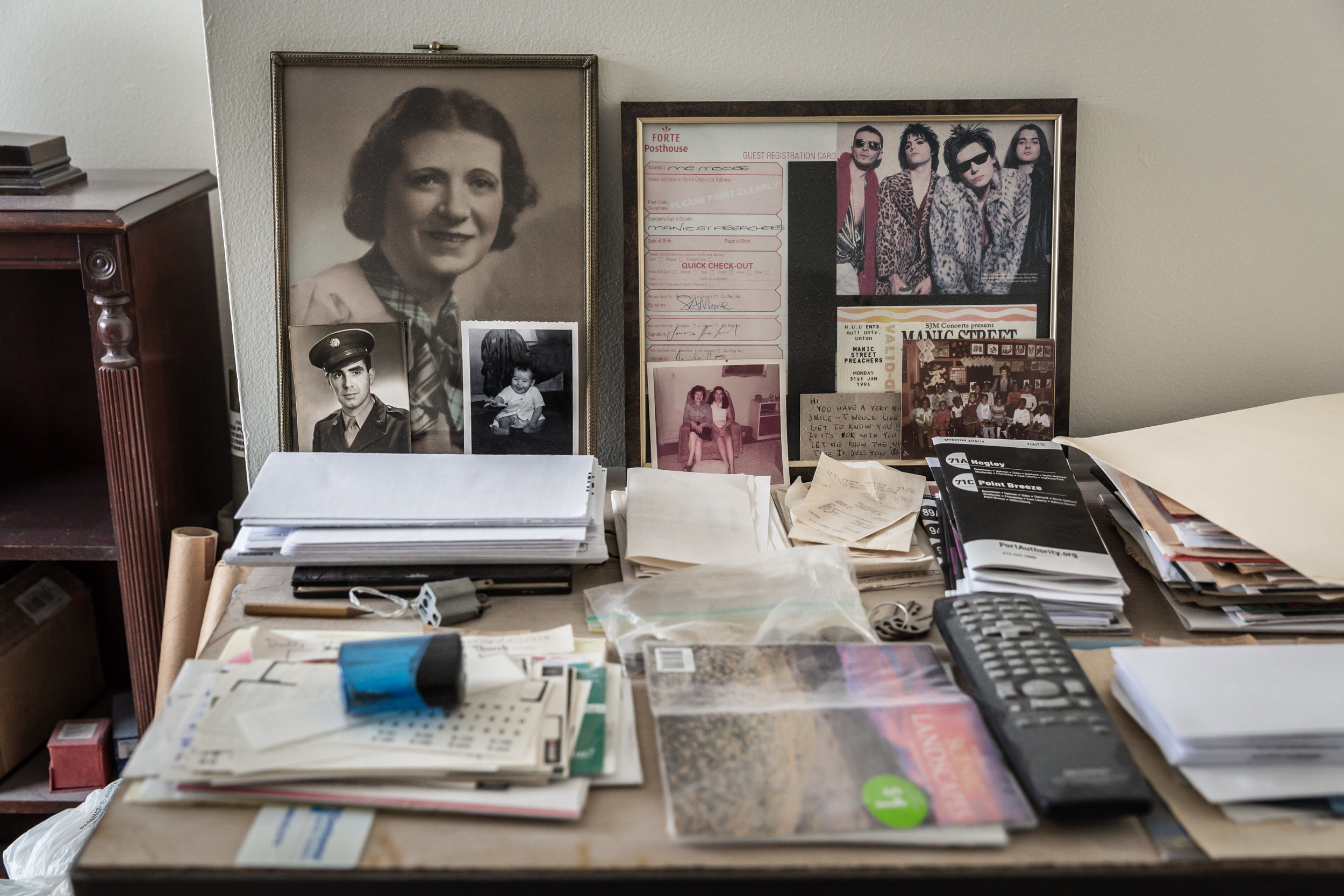 Vivian’s desk as seen during a visit on March 26, 2017. It is filled with old photos and memories. “I have been very happy here. My furniture even fits perfectly. My desk and bookcase fit just right." (Photo by Maranie Rae Staab/PublicSource) 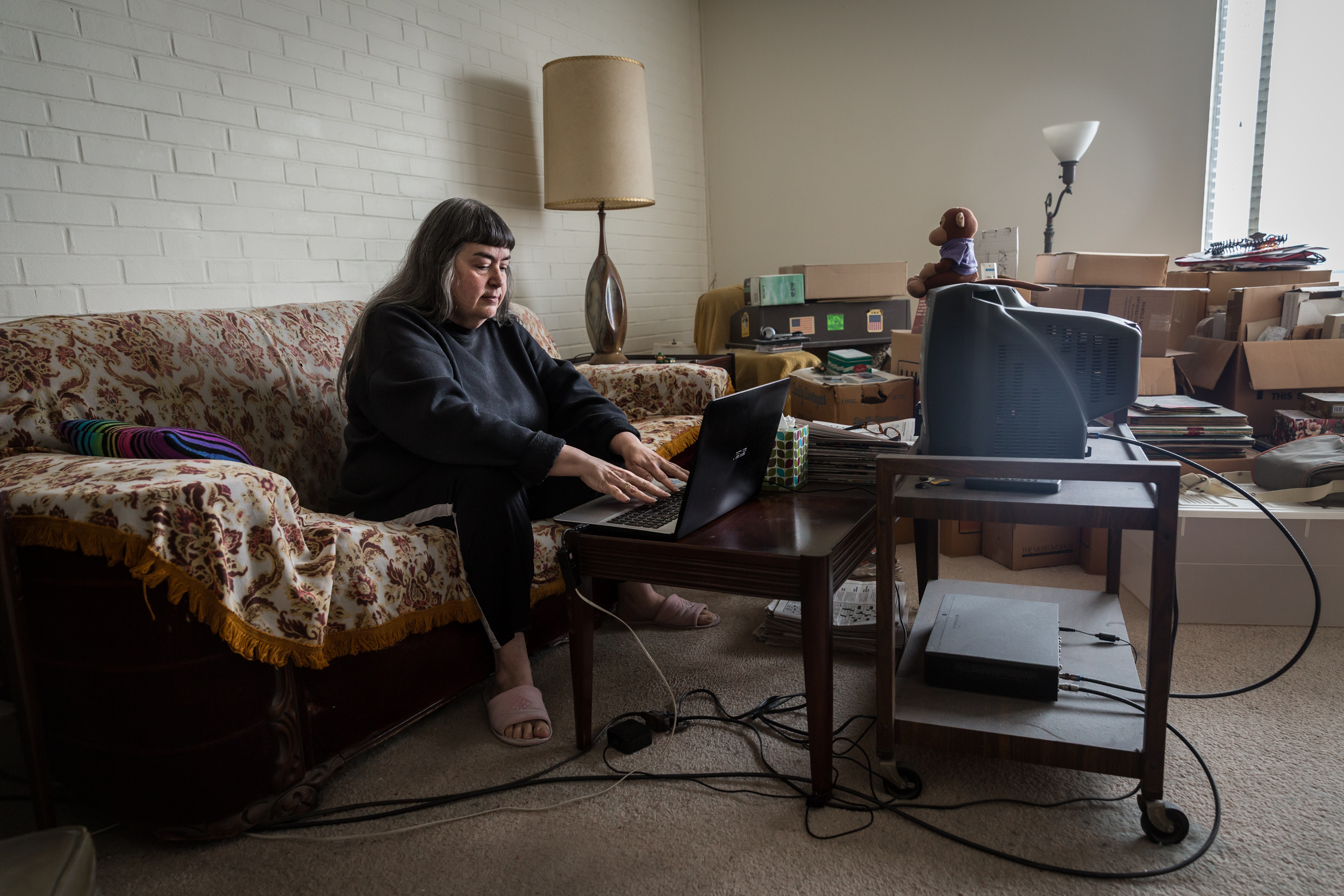 A self-described “geek”, Vivian spends much of her time on a laptop studying genealogy, keeping up with current events and doing research. (Photo by Maranie Rae Staab/PublicSource)

For the next 16 months, Vivian will call Mellon's Orchards home. Then she will have to move again.

She chooses to remain optimistic about her situation. Thankful to be able to remain in the neighborhood for another year, she is going to use the time to look for full-time work. Vivian currently works part time at the East Side Neighborhood Employment Center (part of an AARP program called Seniors Community Service Employment Program). She supports herself without any government assistance.

She says her dream job is to work at the University of Pittsburgh; it’s where she, her mother and grandmother attended. Vivian says she would save money from a full-time job, so that when her time at Mellon's Orchards runs out she might be able to move to another home in East Liberty — this time, to a place of her own choosing.

“I have been walking Penn Avenue my entire life; all I know of Pittsburgh is East Liberty. I want to continue my family legacy of being in this part of town.”

A self-described “geek,” Vivian has a history degree from the University of Pittsburgh and spends much of her time reading and researching genealogy. She enjoys talking about her own family’s history.

"...all I know of Pittsburgh is East Liberty. I want to continue my family legacy of being in this part of town."

Vivian lived in that duplex for most of her life, surviving the passing of her great-grandmother in 1980 and then her grandmother in 2003. With a smile, Vivian remembers her grandmother: “I only wish she would have taught me her secret meatball recipe before she died.” The duplex was a rental, so when it fell into disrepair in 2009 Vivian had little choice but to leave.

Surrounded by towers of boxes packed with personal belongings and shopping carts filled with odds and ends, we sat in her apartment at a table overlooking Penn Avenue. Some of these boxes have never been unpacked in this apartment. “I have never felt secure about my financial situation,” Vivian explains, ”and so, for the past eight years, I have always been prepared to have to leave.” Vivian stands in her doorway at the Penn Plaza apartments. She is one of the complex's last remaining residents. (Photo by Maranie Rae Staab/PublicSource)

Vivian’s apartment, albeit cluttered, is kept meticulously clean. She is fastidious about it in an attempt to thwart the roaches that she says have been commonplace at Penn Plaza.

With a glance at Baby, she reflected on her situation. “I just have to make sure that I keep a roof over my head, our heads.

“There is a real family connection here. Leaving East Liberty will destroy that. I feel like I am continuing the legacy of my family here. It keeps me connected to the folks that I have lost, to the folks that are no longer here. When I am walking up and down Penn [Avenue], I almost feel them with me.”

Maranie Rae Staab is Pittsburgh-based freelance journalist. She can be reached at maranie.staab@gmail.com or 412.979.6187.