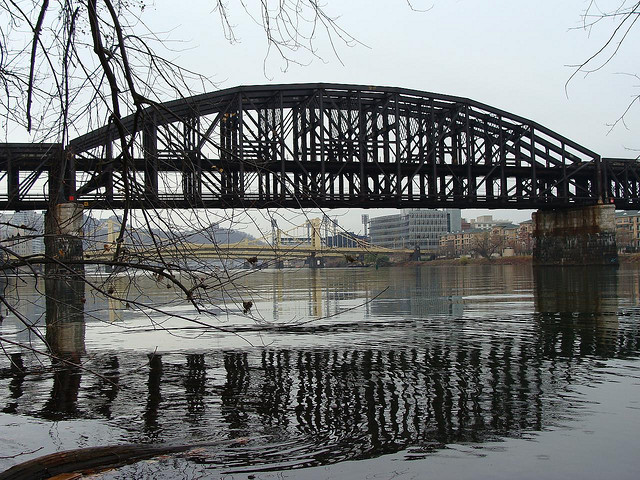 That’s how the Fort Wayne railroad bridge that crosses the Allegheny River is described in a new citizen survey of bridges that are used by trains to transport crude oil.

A conservation group surveyed 250 oil train bridges in various regions and reported that nearly half of them were significantly deteriorating.

The Waterkeeper Alliance, a group dedicated to conserving watersheds, found that many of the bridges had crumbling concrete, washed away footing and corroded steel beams, according to an Al Jazeera America article.

The Alliance’s survey covered a fraction of the spans that carry crude oil; there are more than 100,000 oil train bridges nationwide.

The group sent out their creek and river “keepers” in kayaks and patrol boats to inspect bridges in the watersheds of rivers, such as the Allegheny, and to document their findings. They observed that 114 of the bridges seemed to have some sort of structural problem.

A person from the Three Rivers Waterkeeper group surveyed the Fort Wayne bridge, which connects the North Shore and downtown Pittsburgh.

There is crumbling and cracked concrete with exposed rebar on each of the piers that affix the bridge to the riverbed. The main steel support has extensive rust, pitting, and holes throughout the underside of the bridge. If a train carrying crude oil derailed on this bridge, the resulting explosion would have a catastrophic impact on the environment and the 130,000 people who live and work within the half mile evacuation zone of the Fort Wayne Railroad Bridge.

Ed Greenberg, a spokesman for the Association of American Railroads, told Al Jazeera that outward appearance does not necessarily determine the safety of the bridge.

The [Federal Railroad Administration (FRA)] receives complaints about the condition of railroad bridges almost daily, said an FRA official speaking on condition of anonymity in order to comment freely, and in most cases the problems turn out to be cosmetic rather than structural. However, the official said there’s no formal procedure for adjudicating public concerns about rail bridges and no central record kept of complaints.

U.S. Department of Transportation statistics attribute 58 train accidents to the failure of bridges between 1982 to 2008.

The FRA designates the responsibility of bridge inspections to the railroads. According to the article, the FRA rarely inspects the more than 100,000 bridges, stating that Congress has not given them enough resources or authorization to do so. Many of the bridges were built more than 100 years ago.

The railroads do not make their inspection records public.

Sarah Feinberg, the head of the FRA, pushed for railroads to be more transparent with inspections, and said that local officials have the right to know about possible safety issues.

According to Al Jazeera:

Last week Feinberg took the additional step of warning the railroads that complaints about rail bridges are pouring into the offices of members of Congress who have then contacted the railroads and ‘are coming away unconvinced.’ If that continues, she warned, ‘Congress will ask us to step in more aggressively.’

PublicSource has reported on the issue of derailments and crude-by-rail transport. With Pennsylvania as a top destination for crude oil, big cities like Pittsburgh and Philadelphia have oil trains buzzing through city neighborhoods.

In March, PublicSource reported that 1.5 million Pennsylvanians in both urban and rural areas live within a half-mile of tracks that haul crude oil — the federally recommended evacuation zone for oil train fires.