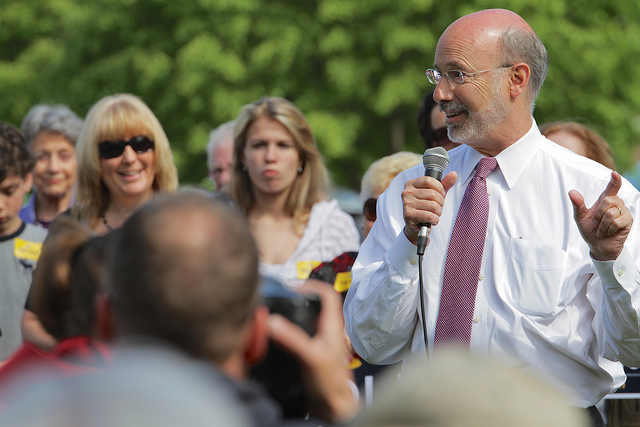 Democrat Tom Wolf continues to hold a large lead over Republican Gov. Tom Corbett in the governor’s race, according to a Quinnipiac University poll released Thursday.

And, just two months before the election, the poll showed there may not be a lot of undecided voters left. More than 80 percent of the likely voters polled had already made up their minds.

The race changed little over the summer as Wolf has maintained a double-digit lead in the polls despite Corbett spending twice as much as Wolf on TV ads.

Quinnipiac University surveyed 1,161 likely voters from Sept. 3 to Sept. 8 on land lines and cell phones. The poll’s margin of error is 2.9 percentage points.

The poll found that 51 percent of respondents who said they were voting for Wolf made the distinction that their votes were more about opposing Corbett than supporting Wolf. More than 40 percent of those polled had a “strongly unfavorable” view of Corbett.

Meanwhile, 28 percent of respondents had a “strongly favorable” view of Wolf, though 26 percent of those polled felt they hadn't heard enough about him.

However, voters will have the chance to hear more from both candidates. The first of three gubernatorial debates will take place at the Pennsylvania Chamber of Commerce in Hershey on Sept. 22.

Then a few days later, the summer fundraising data for both candidates will be released. We’ve already seen glimpses of large donations that will appear in the new figures. For instance, the Republican Governors’ Association announced last week that it recently gave Corbett $3.5 million.