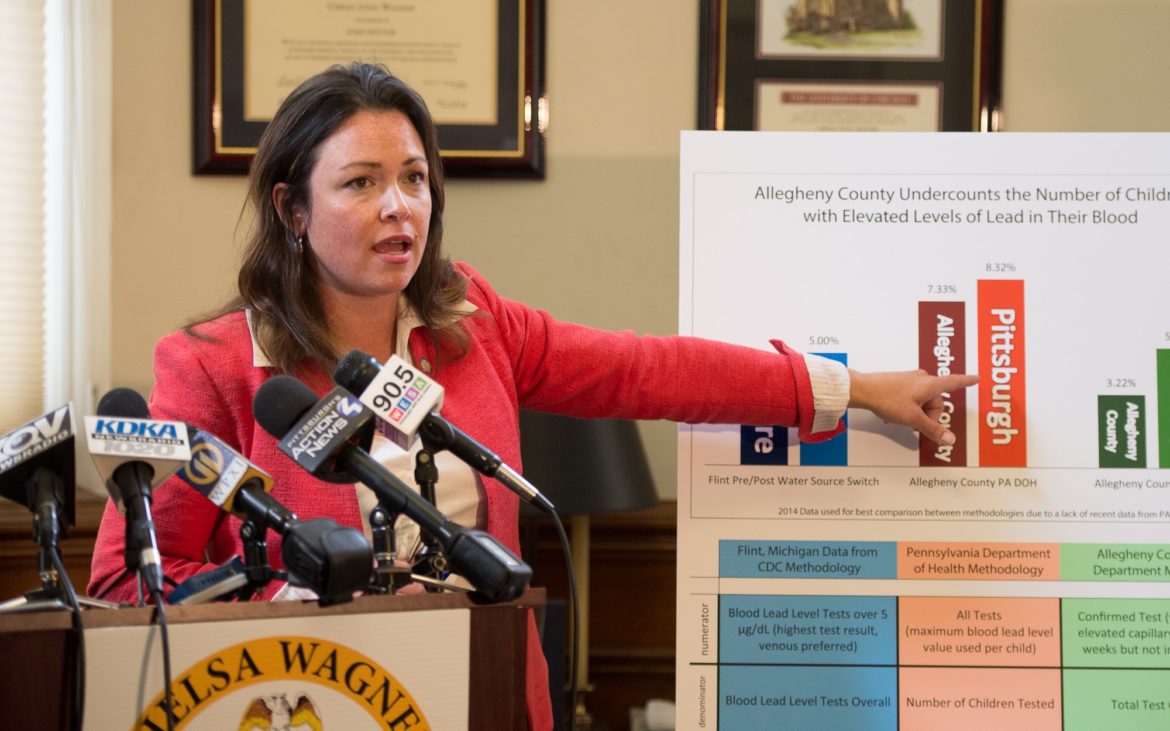 Allegheny County Controller Chelsa Wagner at a press conference in 2017. On May 8, 2019, Wagner's office issued an audit on county piggyback contracts. (Photo by John Hamilton/PublicSource)

Allegheny County's controller is again blasting county health officials for doing what she considers essentially nothing to limit lead exposure.

In an audit released this afternoon, Controller Chelsa Wagner says the agency “has taken no meaningful action to protect the residents of Allegheny County,” leaving residents with faulty data and misinformation about how to avoid the risks of lead exposure.

But Karen Hacker, the director of the health department, said the audit is “flawed...inaccurate...and misleads the public.”

“The audit misinterprets the data and leads to a faulty conclusion that blood lead levels are rising. This is inaccurate and wrong.  Additionally, the audit takes statements out of context, omits important details of the cases that are referenced, and disregards national recommendations and practices,” Hacker said in a joint statement with the County Board of Health.

The 39-page audit detailed what Wagner described as an underestimation of how many children are at risk of lead poisoning, a failure to assess that risk, and a misinformation campaign that has caused residents to not understand the gravity of Pittsburgh’s lead problems.

Lead is a neurotoxin especially dangerous to children and pregnant women. The city water authority is still trying to get a handle on how big of a problem it is by surveying the city for lead service lines.

Dr. Marc Edwards, a researcher and whistleblower who gained notoriety for raising public awareness of the water crises in Flint, Michigan, and Washington, D.C., joined Wagner at her Tuesday afternoon press conference to defend the content of her audit. “I think it’s important to recognize that there’s no one single perfect measure that you can use to get at the estimates of the childhood lead exposure problem,” he said. “You need to look at this from every dimension.”

Wagner’s audit, which included a six-page response from Hacker, serves as one of the most vitriolic public documents released since the public became aware of Pittsburgh’s lead crisis last year.

But aside from the public dispute, the audit highlights three points of contention that could be key as Pittsburgh, Allegheny County and the PWSA begin to solve the region’s lead issues.

The state Department of Health found that the rate of lead exposure in Allegheny County was 7.3 percent in a 2014 report.

Hacker, though, said Wagner’s math was bad and that the health department was using a method that the Centers for Disease Control has recommended.

Wagner called the health department irresponsible for blaming lead exposure not on water, but on paint chips, as the county explains in its “Low Down on Lead” document.

“To date, the ACHD has been slow to adapt its lead remediation paradigm from one almost exclusively focused on the remediation of lead paint sources, to one that in the wake of the events in Flint...treats seriously the risk posed by lead water contamination,” Wagner wrote in the audit.

Hacker called Wagner’s claims about the health department’s work “a misrepresentation.” And Wagner’s comparison to Flint has been roundly dismissed and disputed by other public officials, including Mayor Bill Peduto, who argue Pittsburgh’s situation is less dire. Wagner said such a comparison was necessary.

“I think it’s important for us to show in context how does Pittsburgh and PWSA compare to what people are familiar with, that being Flint,” she said.

The health department’s authority over lead issues is questionable

In the audit, Wagner also says Hacker and the health department should be doing more to fix some of the lead problems in the county. Hacker, though, said the department is taking as much action as the law allows. For example, Hacker argued, she has no oversight of the PWSA or the other water providers in the county. In a response letter attached to the audit, Hacker wrote that that Wagner “ascribe[s] to ACHD an authority it does not have.”

“The entire tenor of the audit...suggests that ACHD has not done “enough” — a subjective determination made by the Controller’s Office,” Hacker wrote. “We readily acknowledge that all stakeholders can do more, but suggesting in any way that ACHD has been derelict in its duties to protect the health of the residents of the county misrepresents the daily work that hundreds of employees do on behalf of those residents each day.”

Hacker noted that the state Department of Environmental Protection has oversight over the water authorities and can levy penalties. When it comes to water, the health department can conduct home inspections and enforce compliance on some non-penalty issues, she said.

“The response I’ve seen seems to be motivated by creating a picture of Pittsburgh that has absolutely no problems, and that’s not fair to the residents who live here,” she said. “Everyone wants Pittsburgh and Allegheny County to do well…[but] we have to be transparent.”