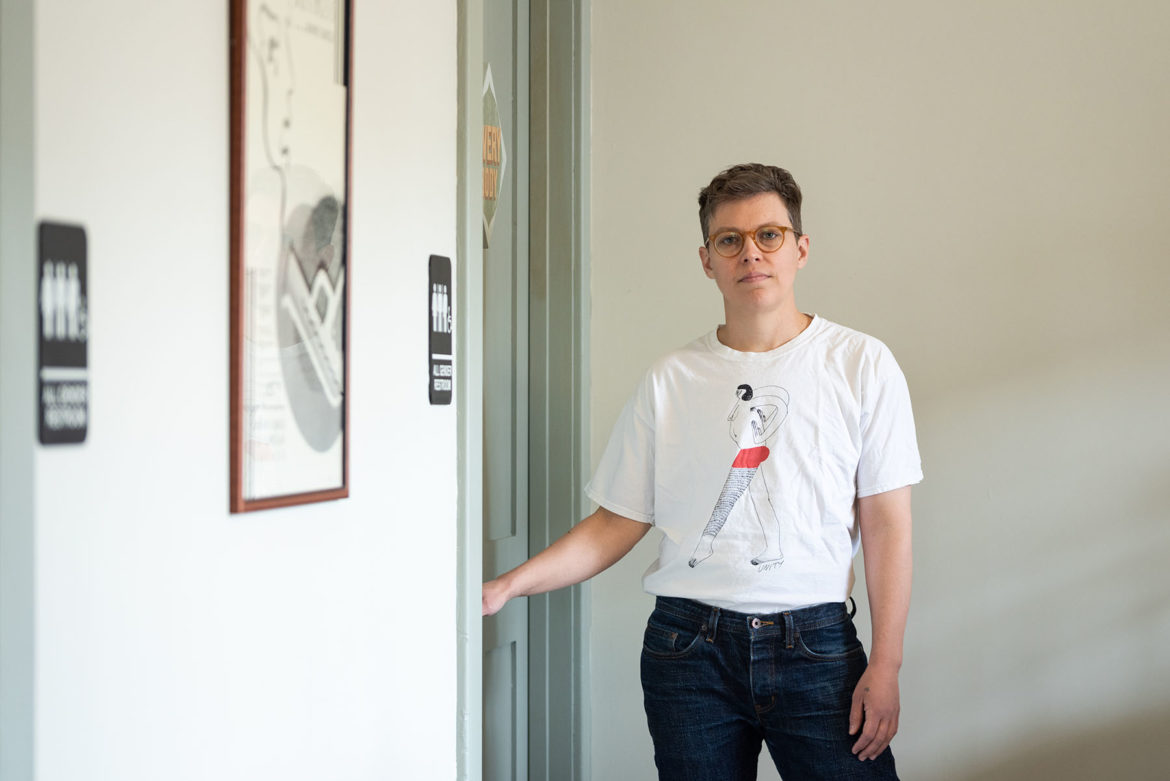 Nica Ross poses for a photo on May 17, 2021, in front of an "All Gender Restroom" at Pear and the Pickle in Troy Hill. Nica is seeking change to gender requirements in Allegheny County's plumbing code. (Photo by Lindsay Dill)

I have a sort of math problem that I face many, if not most days. It goes like this: I’m hydrated, I’m nowhere near my house and I have to pee. I am presented with two choices: “Men’s” or “Women’s.”

First step, I try to channel a cisgender person. This is an out of body experience for me. I float just outside of myself and analyze how I’d look to a stranger: soft face with no shadow of stubble, short hair with a good fade, flat chest, square hips, shorter than I am tall, masculine clothing, likely a baseball cap and my white skin.

I take off my baseball cap, maybe that will help? Or should I keep it on? I clear my throat to hear which octave I am working with today. Do I relax my face in preparation for a friendly non-threatening smile? Or square my jaw and prepare not to make eye contact? I scan the scene. Which bathroom seems occupied? Are there police or security officers? I consider where I am. Am I out seeing a movie in Homestead or am I at work at Carnegie Mellon? I spot a cisgender woman; should I just go ask her which bathroom I should use? Because this actually isn’t my problem to solve. This equation does not fit me, I do not compute. In the words of Yale University Professor of Architecture, Joel Sanders, I am a “non-compliant body”.

I do not pass as male or female. I identify as non-binary and transmasculine. Those words are helpful for others and somehow helpful to me as a result. For me, it’s shorthand for the fact that I was assigned female at birth, that I present myself in a masculine way and that I don’t really fit in the male or female categories. I am quite literally born this way, and I’ve lived this way most of my life. And binary bathrooms have long been a clear indicator that I am “non-compliant.”

In Pittsburgh, gendered bathrooms are the literal law.

While you might find an occasional all-gender restroom, these bathrooms exist either outside of Allegheny County’s plumbing code or are possible only after gender-assigned fixture counts have been met. Ultimately, the code does not allow all-gender restrooms in most cases. I have been asking the county to change the code since 2019. This work makes me so sad. It’s upsetting to have to explain how I do not feel welcome, considered or even invited into public society.

When I go to a restaurant with friends, I am not able to forget and enjoy myself because ultimately I will likely need to encounter the gendered restrooms. At a time when 35 state governments are trying to pass anti-trans laws, the daily reminders that I’m unwelcome are a lot to bear. And here I am writing this essay to explain to a largely cisgender audience something that is likely invisible to them. I’m exhausted. But I am not alone.

I am a member of Carnegie Mellon University’s independently organized Trans, Nonbinary and Intersex Alliance [TINA]. I am so grateful for this group. As a transgender faculty member, I have felt very alone in navigating the cis-centered systems of this institution, this city, this county and this state.

I am not alone in asking for the basics that cisgender people receive without asking. Enshrined in international building codes, ID management systems, and even requests for donations are the minute gestures of respect and visibility — for cis-people. They happen so easily that these gestures are invisible to cisgender people. But it’s not only respect that gender non-conforming people need, but also safety.

A public hearing on changes to Allegheny County's plumbing code is scheduled for 5 p.m. June 22. To participate in public comment, learn more here. 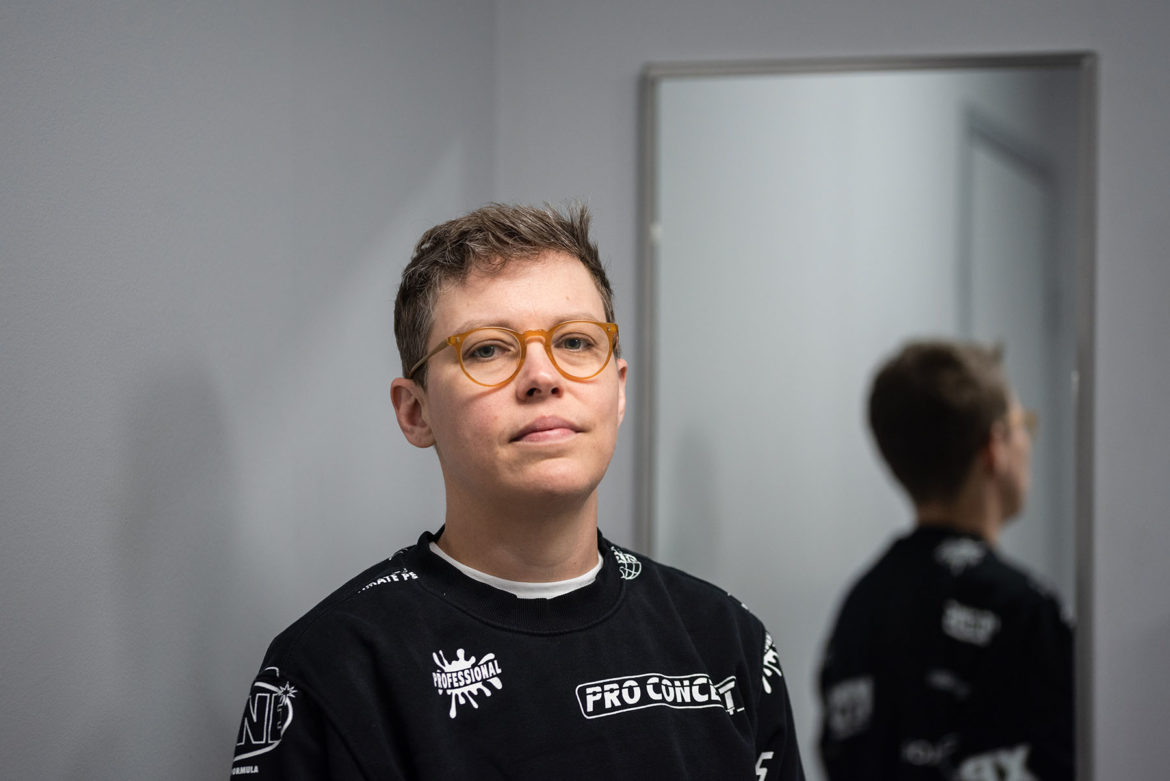 Nica Ross poses for a photo on May 17, 2021, in a gym restroom. Nica is seeking change to gender requirements in Allegheny County's plumbing code. (Photo by Lindsay Dill)

The bathroom is an unsafe place for many trans-people, including Alexa Negrón Luciano who was murdered after being reported to police and demonized on social media for using a women’s restroom in Toa Baja, Puerto Rico. Locally, I have spoken with police officers who shared that they receive calls and “must respond” to reports of “large shoes” in adjoining stalls and other non-compliant bodies that threaten cisgender spaces. And perhaps needless to say, the threat is not our bodies but the calls to the police and the discriminatory sign on the door.

But there’s a simple solution to bathroom access issues, which I imagine was invisible to you until reading this. In our current plumbing code, single-stall restrooms must be labeled “male” or “female.” Meanwhile, Denver, New York City, Philadelphia, Santa Fe, Seattle and many more municipalities — not to mention the entirety of California — require all single-stall restrooms to be available to anyone of any gender. These requirements come via ordinances, code changes and other clever governmental mechanisms. In addition, the recent 2021 International Plumbing Code spells out a privacy-centered design for multi-stall all-gender restrooms that utilize floor-to-ceiling stalls thus reducing bathroom lines, increasing restroom access and enabling efficient use of a building’s square footage.

The Allegheny County Health Department has not proposed such changes to our local code. Instead, at its May 5 Board of Health meeting, the department proposed minor revisions that will allow businesses the option to build single-stall all-gender restrooms after they build single-stall “male” and “female” restrooms. This would result in an awkward use of precious square footage to create a wall of doors, all leading to identical facilities, despite being segregated as “female,” “male” and “all gender.” The absurdity and impracticality of this “revision” is hopefully obvious and impractical in application.

All of this to say, I hope you join me in asking the Allegheny County Health Department to do what Philadelphia, New York City, California and even Hoboken, New Jersey, have done and end the barriers to all-gender restrooms.

Nica Ross is an assistant teaching professor in video and media design at Carnegie Mellon University’s School of Drama. If you want to send a message to Nica, email firstperson@publicsource.org.