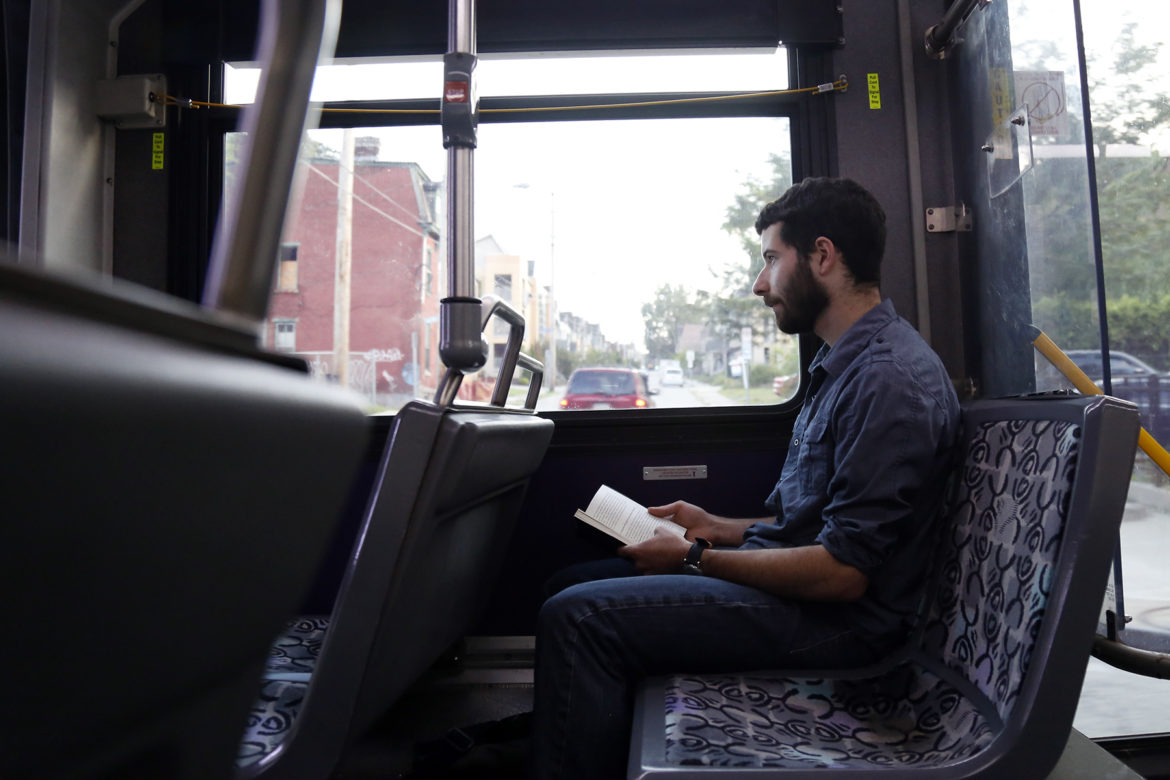 On his commute to work, Andrew Puglionesi reads a book as he rides a Port Authority bus from Oakland to Downtown. He'll then ride another bus to his office in Moon Township. (Photo by Ryan Loew/PublicSource)

Each weekday, I wake up in Pittsburgh’s Oakland neighborhood, take two buses to reach Moon Township and walk about half a mile to get to my workplace. The whole commute takes between 60 and 90 minutes, and it perplexes just about everyone. My parents tried to talk me out of taking the bus; one of my coworkers has called my commute a trek; and, in the early days of this “trek,” my friends often asked me how my commute was going right after or instead of asking, “How are you?”

Why should the way I get to work garner so much attention? Though my parents often bike around my hometown in suburban Philadelphia, they drive when they need to make longer trips. When I started at my job in January, all of my coworkers drove to work. And my friends, if they don’t have a car, love cars and want one. The undertone in everyone’s assessment of this “trek” is that it’s bizarre that I don’t just get into a car and drive, saving some 30 minutes each way.

During the first couple weeks of the commute, I began to agree. An hour seemed like an immensely long time to be on a bus and too long for any commute. Doubt permeated my morning and evening bus rides, and I strongly considered ditching the “trek” and giving in to the American love for the automobile.

But the more I’ve thought about it, the more sense a carless commute has made. Of course, there are legitimate reasons to have a car. Public transportation lines are difficult for some residents to access or are impractical based on their work schedules. Some residents need accommodations for disabilities that make buses difficult or impossible to use. But for residents who have a reasonable choice between a car and a bus, I don’t understand why so many people choose the car.

The clearest benefit of ditching the whole car idea is financial. A recent study by AAA found that the average cost of owning a new car is $8,849 per year over the first five years (assuming you drive 15,000 miles per year, an average distance for drivers aged 20-54). This cost includes gas, insurance, maintenance and inspection fees, and depreciation of the vehicle’s value.

The cost of a monthly transit pass in Pittsburgh is $97.50. If you do the math, by not owning a car and opting to take public transportation, a Pittsburgher might put about $7,700 in their pocket each year. If a family of three in Pittsburgh went from having two cars to having no cars, the parents could pay about 85% of their child’s in-state tuition at my alma mater, the University of Pittsburgh, with this windfall alone. (The parents would each get a bus pass, and the student would ride for free — it’s a nice collegiate perk.)

There are also personal reasons to prefer public transit. For one thing, when you’re not the one driving, you’re free to do whatever you want. You can read a book. You can check your email. You can make plans for the weekend. I’ve even written computer programs. Moreover, you have a good chunk of time already carved out of your day to develop in a particular area and meet daily goals.

A traditional commute might be shorter in many cases, but it would consist solely of driving, and you couldn’t do any of those things behind the wheel. When you commute by public transit, even if it takes longer, you actually have more time in your day to do what you want. 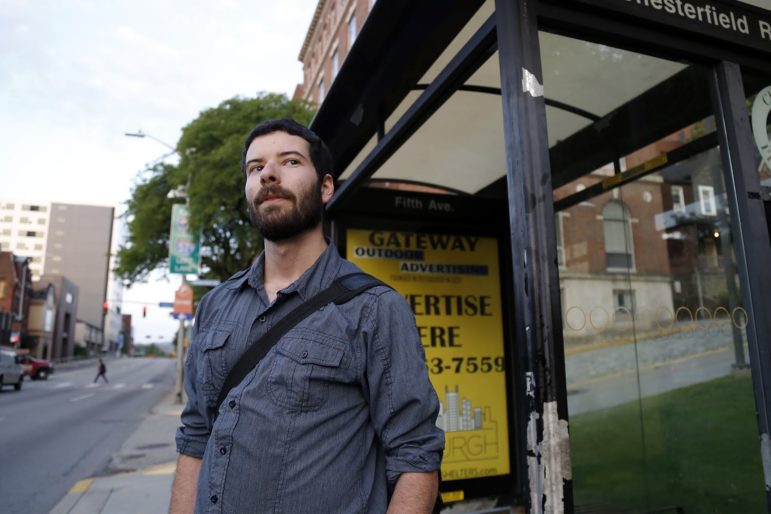 There are many other benefits of ditching your car.

If traveling by public transit forces you to do a bit of walking, as is often the case, then exercise you might not otherwise get is effortlessly built into your day. Personally, I’m guaranteed to walk over a mile each day simply because of my commute.

You may also meet new, often interesting people you wouldn’t otherwise interact with. Compare this to being isolated in a steel-and-glass bubble where you get angry at everyone on the road for being idiots.

And inclement weather? No worries; buses and trains are kind of like Humvees. While everyone else’s wheels are spinning uselessly on snow and ice, they march forward quite reliably. For example, one morning this winter, a coworker of mine was stuck in his car on the side of a highway for several hours. The bus I was on rolled right past many stranded drivers. Unlike him, I got to work at a reasonable time.

Although we don’t have a public transit system like New York’s, our dedicated busways may also make your commute immune to traffic delays.

And so at the end of the day, public transportation is dramatically cheaper than driving. It’s often more pleasant, and it’s likely to give you more time to do what’s important to you. I don’t even have to discuss carbon emissions, the climate crisis or air pollution to make my point. If you live and work in a major metropolitan area with a half-decent public transportation system, there are plenty of compelling reasons to ditch your car and ride the bus to work. Or to the grocery store. Or to your friend's house. And if your current workplace or home make driving a necessity, your next move or job search could change that.

So really, why spend thousands of dollars each year on a car?

Andrew Puglionesi is a software engineer, environmentalist and writer. He can be reached at andrewpuglionesi@gmail.com.