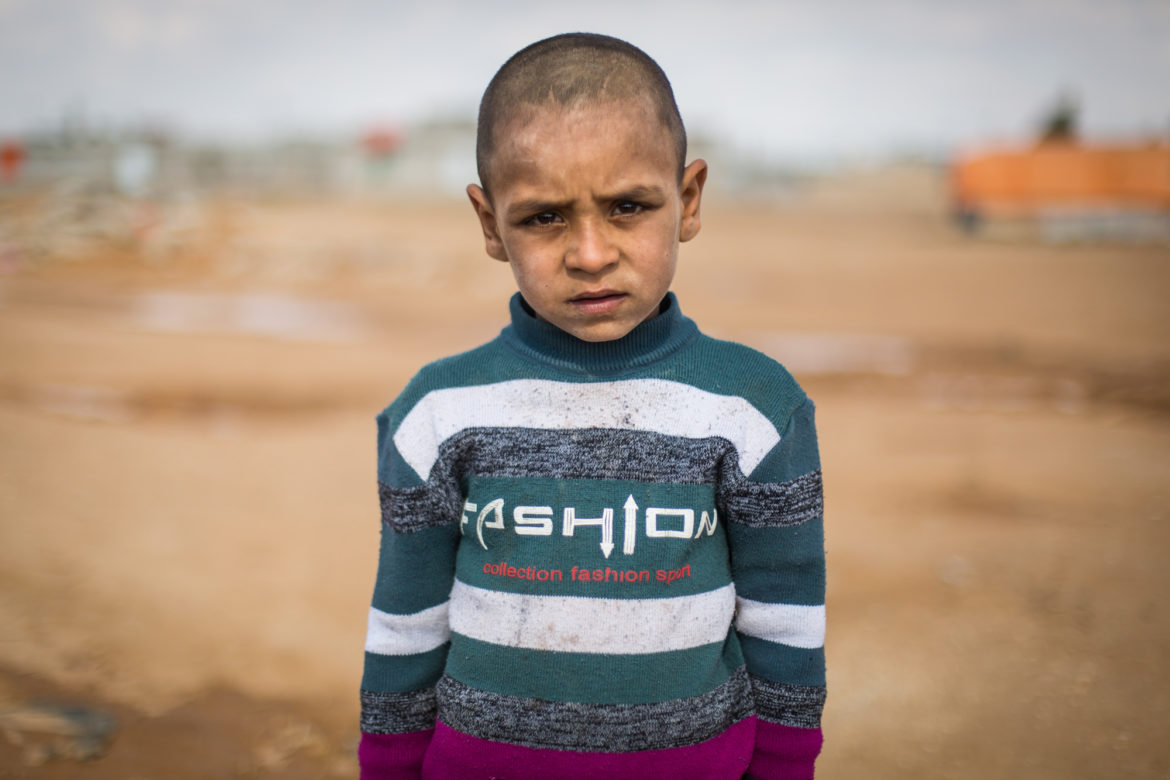 Ali is 6 years old. He and his family fled Syria in 2012, shortly after the initial uprising. Ali has little recollection of his home or of what a “normal” life is. He and his seven family members have been living in an informal, makeshift tent camp with five other families. He wears a shirt that speaks of some cruel irony. It is one of two shirts that he owns and was donated to him at some point in his journey out of Syria. (Photo by Maranie Rae Stabb/PublicSource)

"@maranierae, have you seen this?"

The Instagram post mentioning my name showed portraits of Syrian refugee children; they were familiar and unfamiliar at the same time. These were the children whom I had met and photographed while working in the Zaatari refugee camp last year. But in this photo there were Xs spray-painted across each of their faces. It was an image taken at the “Displaced” exhibition presented during the Three Rivers Arts Festival under the Fort Duquesne Bridge on the Pittsburgh riverfront. Someone had vandalized the photographs, carefully defacing each of the children’s faces.

I was in a friend’s apartment in Iraq when I learned what had happened. Covered in dust and dried sweat, I had just returned from a day working in West Mosul. I am writing this from Iraq, where I have been for the past three weeks partnering with medical organizations and NGOs and working independently to collect stories and take photographs. It’s here in West Mosul that Iraqi and coalition forces fight to retake the city from Daesh (ISIS).

I’ve worked in several camps for internally displaced persons and with a group whose mission is to mitigate harm to civilians in conflict zones. I’ve listened to the stories of those who have lived under Daesh control, who have lost family and friends, who have seen death and destruction and have been forced to survive on flour and water for months at a time. I have witnessed someone die in front of me — a girl named Zeinab; she was a victim of an airstrike, and I saw the effects her death had on her family as they were told, “She didn’t make it.” But amid destruction and despair, there is resilience and hope of these same people who, in the face of such hardship and adversity, have shown me, a foreigner in their land, nothing but warmth and generosity, and who only look ahead to the work of rebuilding their city.

As I studied the vandalized images, my emotions quickly went from anger to disappointment to sadness.

Then, there was acceptance. Acceptance not because I think that this was OK. This was far from OK. But acceptance because photographing and humanizing the periphery of conflict challenges much of the rhetoric that exists today, which in turn usurps the way that people think and what they hold to be true. These photographs, and other work like them, can make people uncomfortable. Most people, including myself, resist being made uncomfortable, but I also believe that it is imperative that we not only allow ourselves to be made uncomfortable at times but that we also seek out ways to push beyond our respective comfort zones.

In September 2015, Pittsburgh Mayor Bill Peduto joined 17 other mayors in signing a letter of support addressed to then President Barack Obama, who had announced plans to accept an additional 10,000 Syrian refugees into the United States. In Pittsburgh, the reaction to that announcement ranged from unequivocal support to scorn, ridicule and rejection. Amal, 8, is originally from Daraa, Syria. According to the latest UNHCR reports, 55 percent of the Zaatari camp inhabitants are younger than 18. Just more than half of school-age children are enrolled in school, while about 13 percent of children in Zaatari are engaged in child labor. (Photo by Maranie Rae Staab/PublicSource)

When I looked for nuanced coverage about what the situation was like on the ground, for more information about the human toll of the displacement I was hearing staggering statistics about, I could not find much. When I turned an ear to the conversations around me, they seemed based less on fact and more on hate, ignorance and fear.

I decided to go and see for myself. Two months later I was in the Zaatari refugee camp in Jordan, volunteering with the Syrian American Medical Society and Global Outreach Doctors. I spent three weeks in the camp, an additional week working outside of the camps in a hospital for war-wounded children and then went on to Northern Iraq with Doctors Without Borders as they set up mobile clinics for internally displaced Iraqis.

That was my first experience in the Middle East. It continues to influence who I am and what I do. What I saw and experienced was so different from what the media tells us and shows us about that part of the world. In much of the city, the destruction is reminiscent of a doomsday film. Though the majority of neighborhoods have been liberated, fighting rages within Mosul’s Old City as Iraqi and coalition forces work together to push Daesh (ISIS) from Iraq’s second largest city. (Photo by Maranie Rae Staab/PublicSource)

In Pittsburgh, we had anticipated that vandalism of the exhibition was a possibility and included reprints in the initial budget. My heart had hoped that it wouldn’t be necessary, but my experiences told me otherwise.

It’s important to note that no one, including me, can be absolutely certain of the motivation behind the vandalism.

Still the question remains, Why? Why would anyone deface art? Especially the faces of children? I, too, am often asked about my motivations.

Why would you go to Iraq? Aren’t you afraid? But aren’t all Muslims terrorists? Isn’t that where ISIS is? Do they speak English? But what will you eat?

These questions, and others like them, are asked of me often and they underscore the reasons that I not only choose to travel to certain places but why, more often than not, I seek them out and fund my own way.

I continue on my own journey, in a world outside of my own, searching for truth and greater understanding of people, of cultures and of places outside of what is familiar and comfortable. In a time where we seem to be more focused on division and what makes us different, photography and storytelling is my way of communicating what I have learned about the world. It is through this search for truth that we, as a society, have any chance of rescuing the humanity of a place from abstraction and ideology. Ebstisam is 7 years old and, like each of the several thousand people in the recently opened Hasansham camp for internally displaced Iraqis, she is from Mosul and recently fled the city amid increased fighting and worsening food shortages. Ebstisam and her father, Basam, arrived at the health clinic in Hasansham to receive treatment for wounds that she sustained from an ISIS bomb attack. Her brother was killed in the attack. (Photo by Maranie Rae Staab/PublicSource)

I do not want to tell people what to think. By sharing images and stories, by putting names and faces with populations of people that are otherwise often only large, anonymous numbers or sound bites on the television, the aspiration is to encourage viewers to pause, and perhaps reconsider what they may have previously thought to be true.

To be allowed into someone’s life, to be permitted to photograph them and to sit with them as they share their story is a privilege. It is also a responsibility to then share these stories, raise awareness, inform and engage. The opportunity to display some of these images at the 2017 Three Rivers Arts Festival was a chance to do just that — to share some of these faces and stories with the city I call home, the city that I love.

When I was first notified of the vandalism, I posted to Facebook my disappointment and offered to meet with the person who damaged the photographs. That post continues to generate more attention than I could have anticipated. The outpouring of love and support I received for the work is more representative of the people of Pittsburgh than any one act of vandalism, than any one person with a can of spray paint.

We still have work to do, though. Photographer Maranie Rae Staab says: ‘We have seen a lot of images of death, destruction and fighting coming out of Mosul. While these are all, of course, important, I suggest that we also continue to see their humanity.' (Photo by Maranie Rae Staab/PublicSource)

Today, perhaps more than ever, we must each take the time to examine our thoughts, assumptions and actions. We must seek out diverse and reputable news sources, take the time to educate ourselves and question our preconceived ideas. We should engage in conversations with people whose opinions differ from our own. We must also continue to be a city of individuals who, whether in public or among a small group of friends, stands up against injustice and speaks out against hate and intolerance. And, we must be a city that chooses inclusion and respects diversity. It’s not about making us feel good; it’s essential for our economy and relevance.

And wouldn’t we, Pittsburghers, want to be on the right side of history?

Maranie Rae Staab is a photographer and journalist based in Pittsburgh, Pennsylvania. She can be reached at maranie.staab@gmail.com.

4 thoughts on “My photographs of Syrian refugees were vandalized in Pittsburgh. But I will keep telling those stories.”