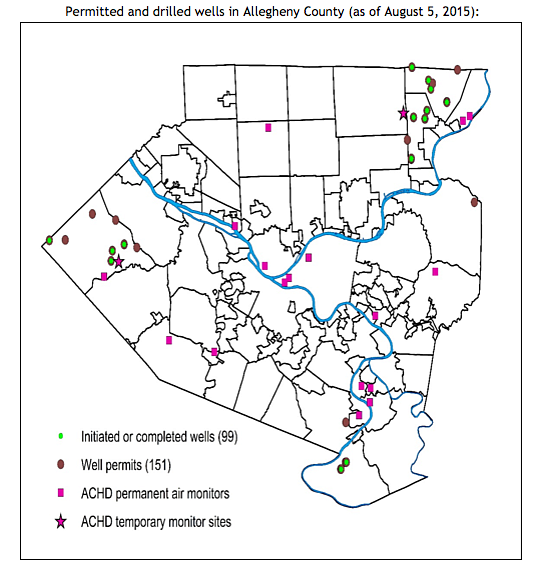 “What we do know at this point is that none of these chemicals have [reached] anywhere, in any shape or form, a level of concern for human health,” Hacker said at the event put on by the League of Women Voters of Pennsylvania at the University Club in Oakland.

The health department started monitoring at the Imperial Pointe housing development in Findlay Township near the Pittsburgh International Airport in March 2014 and at Deer Lakes Park, about 20 miles northeast of Pittsburgh, in June 2014.

Prior to drilling, they tested for dozens of organic compounds, including acetone and toluene, and carcinogens, such as benzene, to determine what the air was like.

The lack of localized air monitoring near shale gas sites has been a major point of contention since the fracking boom hit Pennsylvania. There are no state or federal laws mandating it be done. Regional monitors are in place, but are typically centered in urban areas and are aimed at taking measurements over a broad region.

Consol Energy plans to drill a total of 45 wells on 9,000 acres leased at the airport. The project is anticipated to bring in about $500 million to the airport and was supported by Allegheny County Executive Rich Fitzgerald.

In 2014, Fitzgerald and the Allegheny County Council decided to lease its oil and gas rights under 1,180 acres at Deer Lakes Park to Range Resources, a move that was viciously opposed by environmental groups.

One local group, Protect our Parks, is trying to block a national health accreditation Hacker and the Allegheny County Health Department are going after. The group says the department has failed to protect public health from fracking and, therefore, should not be recognized by the Public Health Accreditation Board.

At the conference, Hacker said part of her health department’s Plan for a Healthier Allegheny, released in October, focuses on health concerns from shale drilling.

“This is a work in progress. One of the reasons we are here today is we need to be up to date on what is going on and what we really should be measuring on a regular basis,” she said about attending the shale health conference. (The conference was funded by The Colcom Foundation, which contributes funding to PublicSource.)

One of the things Hacker has supported publicly is the need for a state fracking health registry. Jill Kriesky, associate director of the Southwest Pennsylvania Environmental Health Project, spoke about the need for a such a registry.

Kriesky presented a white paper her group put together in September that builds a case for creating a statewide registry.

“Comprehensive data    on exposures and illness have been    difficult    to collect — limited more    by policy decisions than technical obstacles,” according to the paper. “The data that have been collected on emissions and health effects, however, point to the value of a health registry.”

Kriesky said: “Ultimately, we hope that what people [learn] by having a registry, and doing studies, can inform public policy about air quality, water quality and health.”

In 2012, when Pennsylvania overhauled its oil and gas laws under Act 13, $2 million was allocated for a registry, but the funding ultimately got stripped from the law.

Gov. Tom Wolf proposed $100,000 in his budget to start a health registry, though environmental and public health groups have said it will fall short of funds needed. Kriesky also pointed out legislation working its way through the Pennsylvania House of Representatives.

House Bill 252 would provide funding to the Department of Health for a health registry for the “collection of health-related data associated with unconventional gas well drilling.” The bill was introduced in February and is pending in the House health committee.

Bruce Pitt, a public health expert at University of Pittsburgh’s Graduate School of Public Health, presented results from a study that found pregnant women living close to a high number of shale wells were more likely to have babies with lower birth weights than women living farther away.

The study, released in June in the peer-reviewed journal PLOS ONE, used birth records from Butler, Washington and Westmoreland counties for the analysis.

The research could not prove that shale gas operations caused the low birth weights, but supports other research showing similar links between shale gas development and health outcomes. Pitt said the findings present a clear need for further research in larger populations.